The long gap between our previous walk and this one tells you all you need to know about the weather we’ve been having lately. Day after day we’ve had the monotony of very low cloud, rain and strong winds. Not only have we not been able to see Cross Fell across the valley, the cloud has been so low that the north Pennines across the valley disappeared completely for several days. Dire and depressing just about sums it up. Today looked as if it would be business as usual but on checking the Met Office web site there seemed to be a small window of opportunity from midday until late afternoon when the cloud might possibly break and the winds ease down to a tolerable 15 – 20 mph. We waited and waited and then, when all seemed in vain, just after lunchtime we did indeed see breaks in the grey woolly blanket which has covered us for days. Hoping it would stay around long enough for us to drive over to Watermillock, and take a short walk over to Gowbarrow Fell, we piled into the car and set off. Arriving at The Hause and finding an empty parking area was a relief too because there’s nowhere much to park along that narrow back road. It was only a short walk and the wind and wet conditions underfoot were a little trying at times but it was good to get out again after being confined to barracks by the weather for days on end. 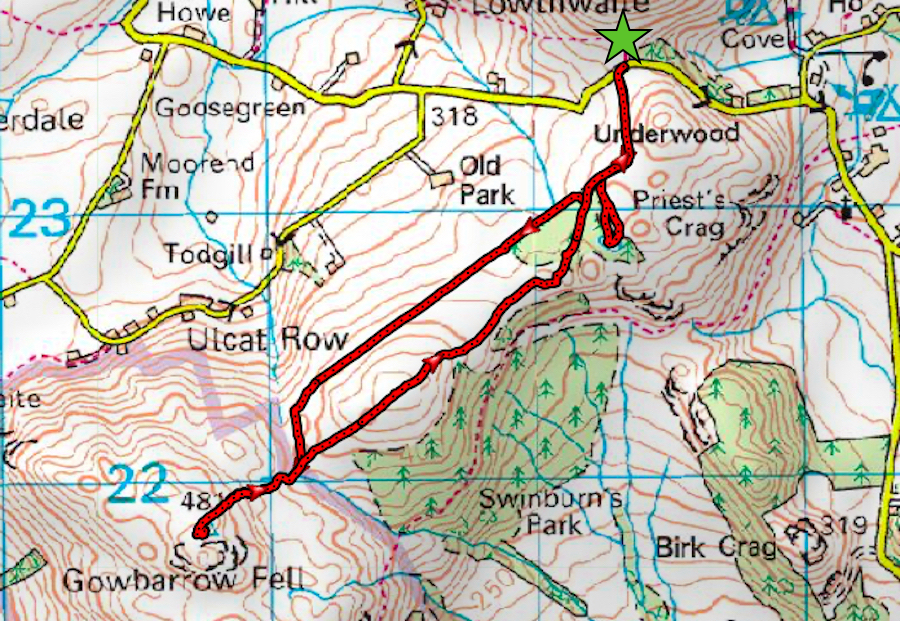 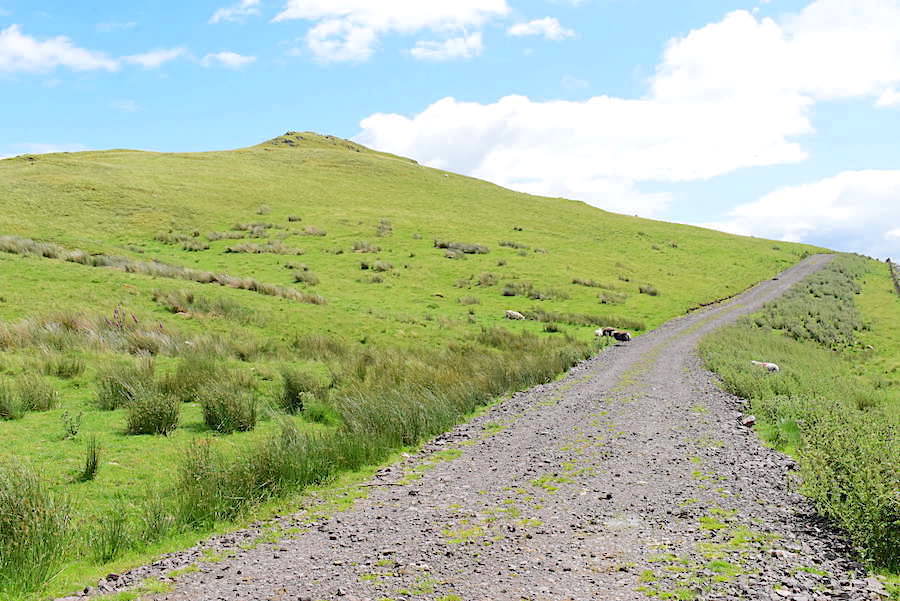 A padlocked gate is just below the parking area but there are no Keep Out notices so over it we go onto this wide track leading over to the forested area marked on our route map. The high point on the skyline isn’t named on the map. 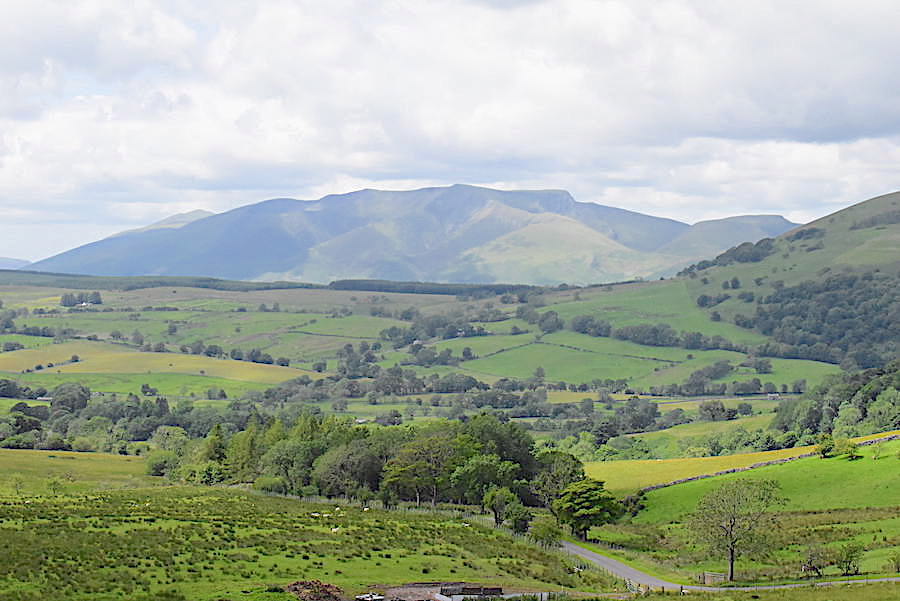 Blencathra beneath a sky full of clouds as we walk along the track. 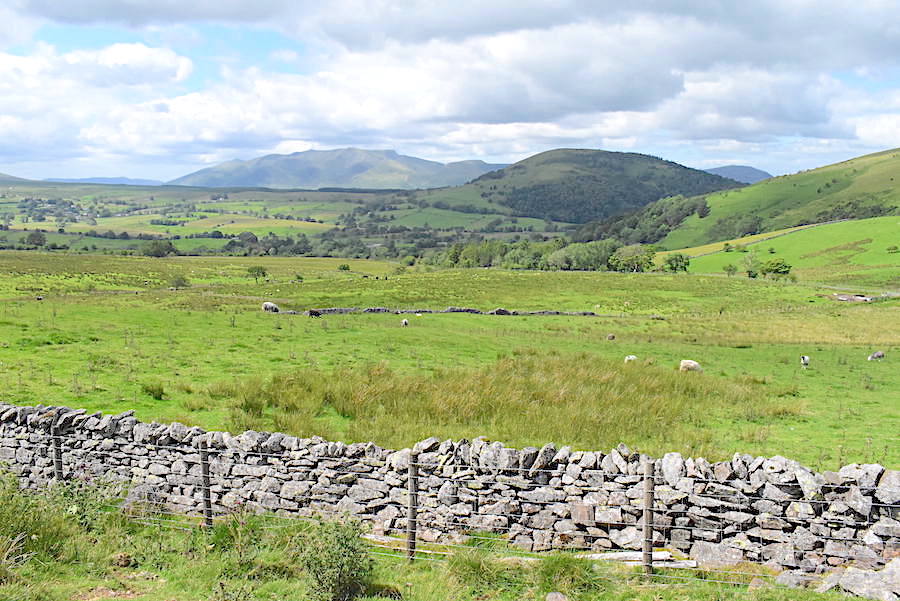 Blencathra and Great Mell Fell from the track. We enjoy a sunny spell for a couple of minutes. 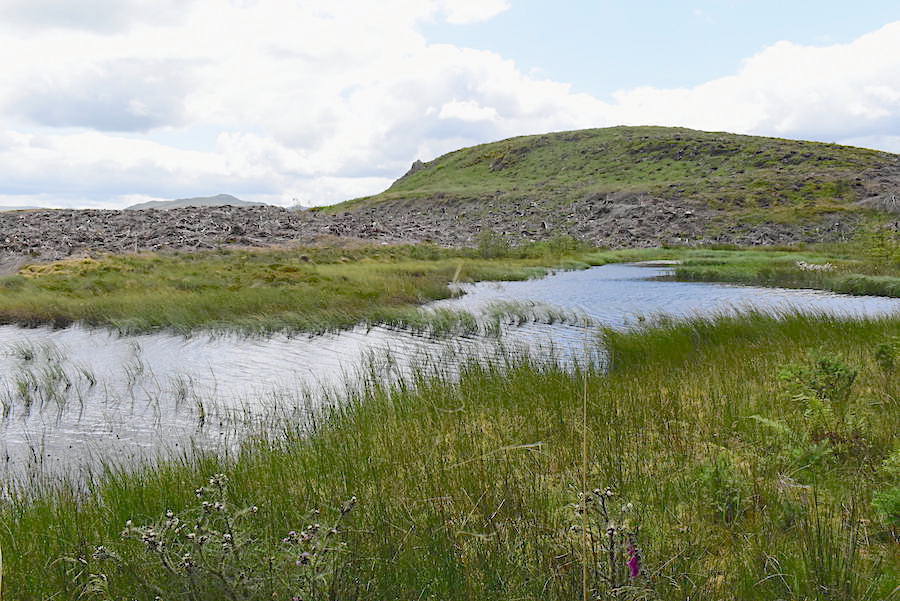 A short diversion from the main track to view the tarn. This has always been hidden by the trees in the past but tree felling has opened up the area quite a lot so it wasn’t too difficult to reach. 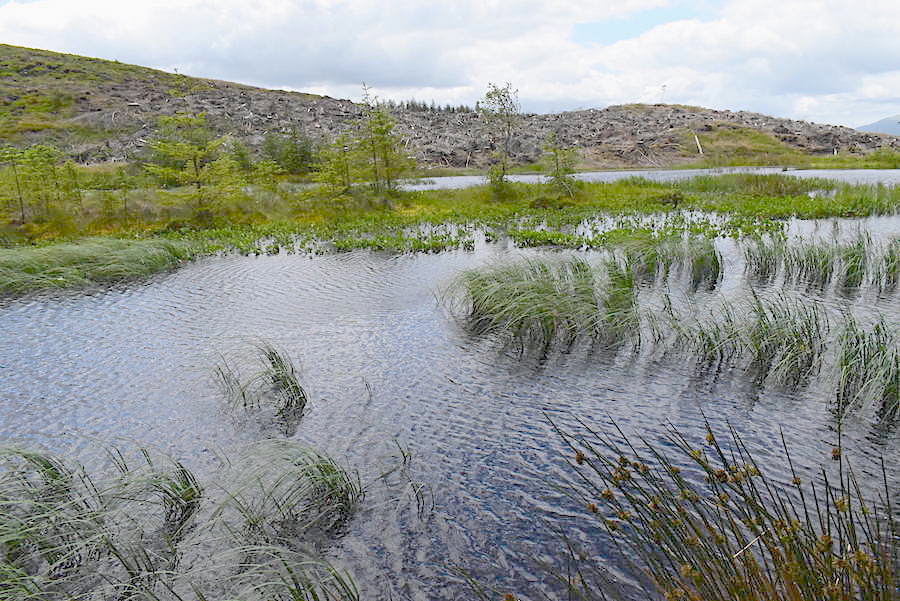 Another view of the tarn. The wind ruffles the surface and rapidly scuds the clouds across the sky so we were constantly in and out of the shadows with corresponding changes of temperature, it was quite nippy at times in the north westerly breeze. 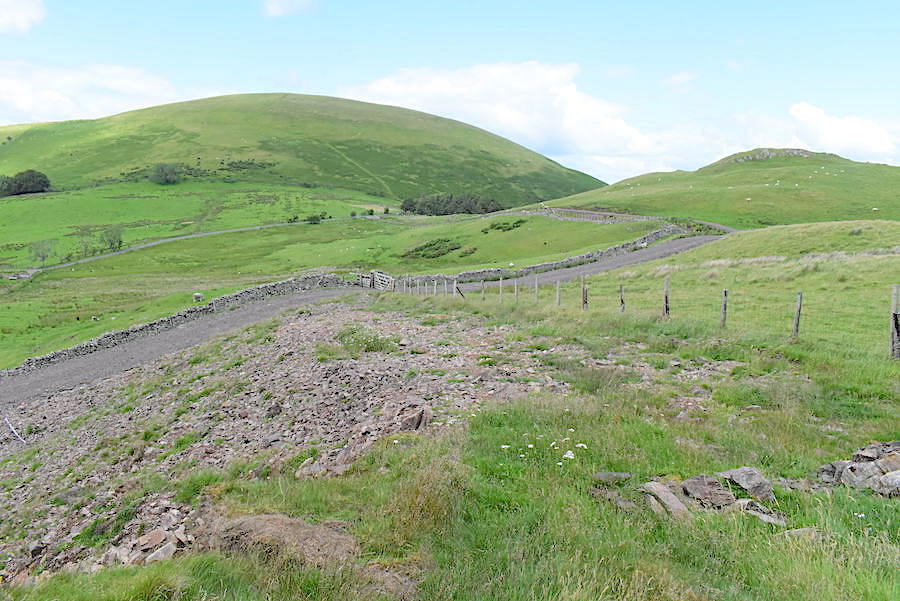 Returning to the track after our diversion to the tarn. Before re-joining the track I took this shot looking back to Little Mell Fell and the nameless top on the right. 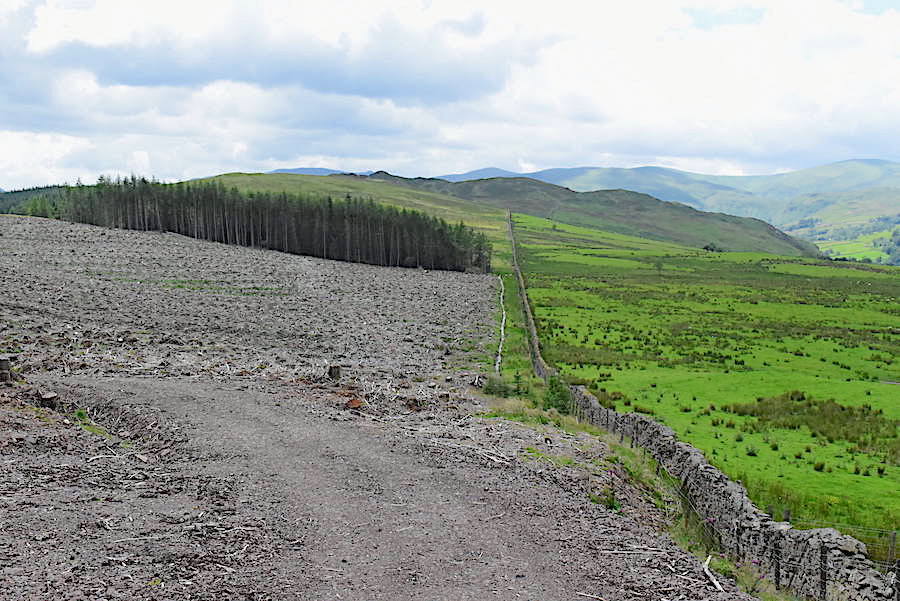 Back on the track and the full extent of the tree felling becomes clear. The track curves around and comes to an end in the deforested area so we carry on straight ahead on the thin path beside the wall. The white line cutting through the grass to the left of the wall isn’t the path though, its a water filled ditch. The path also felt like a water filled ditch for much of its length but that’s hardly surprising given the amount of rain we’ve had lately. 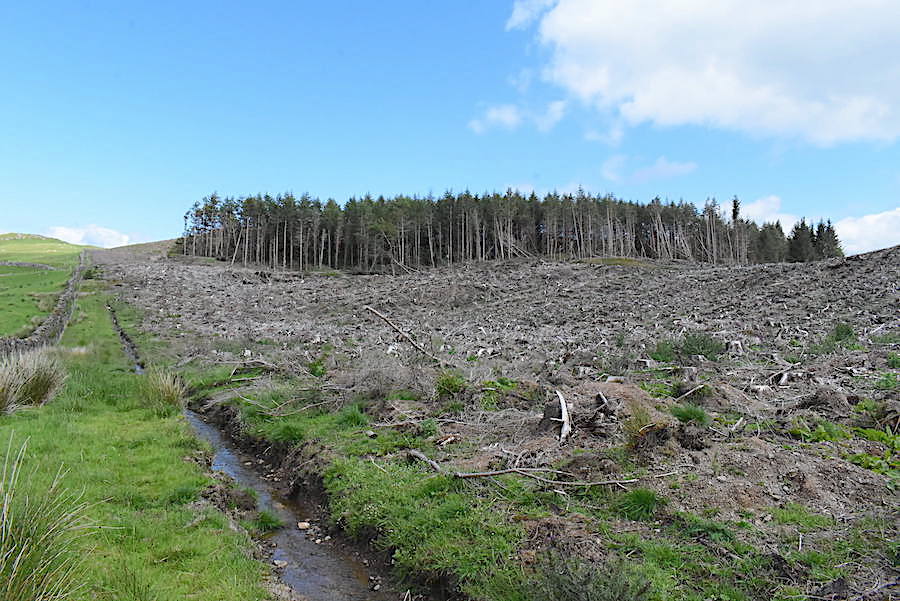 A look back at what remains of the tree plantation. The tarn we diverted to is in a dip between the felled area and the trees still standing. Blue sky above us but the clouds overhead are large and we remain in their shadow. 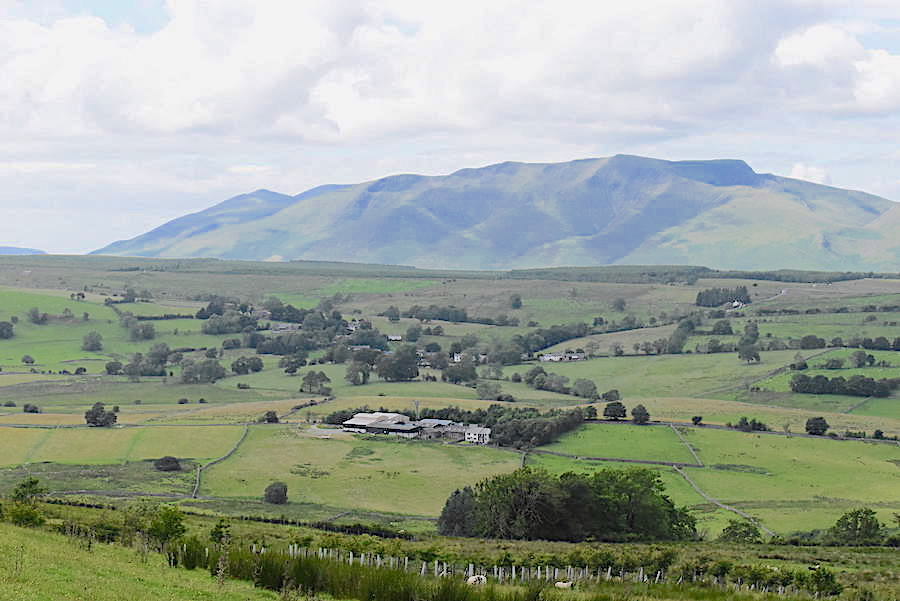 Blencathra gets a brief ration of sunshine, the next time we looked across we could see nothing but a dark grey featureless mass. 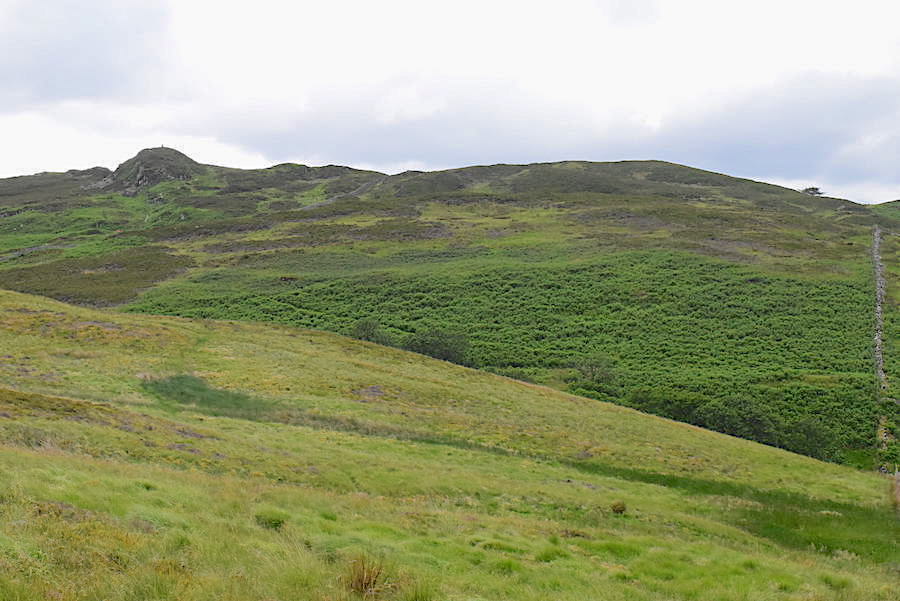 The grassy path rises slightly over the lower slopes of Great Meldrum so we gain some drier ground at last. It will be short lived though as we drop down into the juicy dip of Kirkstyle Gill where we can pick up the path for the remaining short climb up to Gowbarrow’s summit. 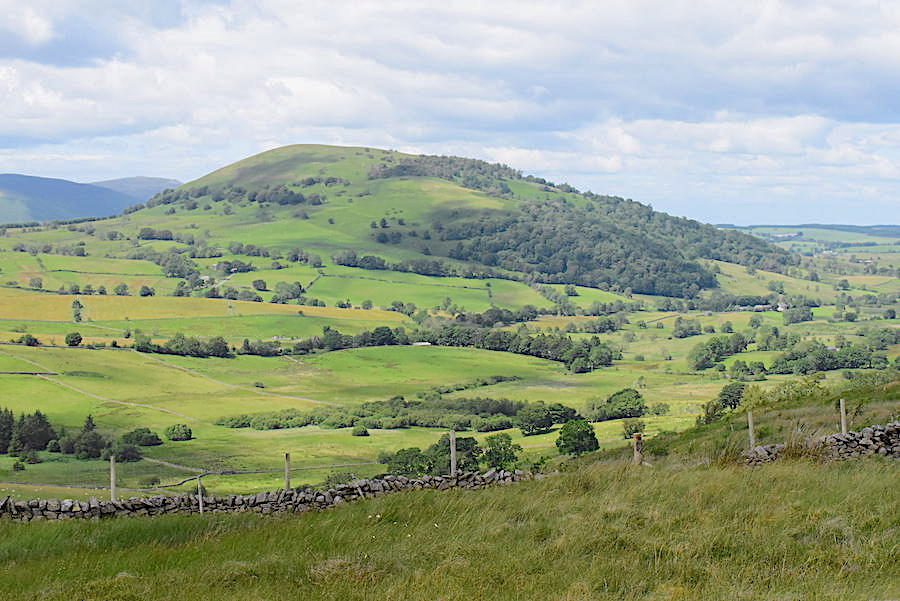 A look back at a sunny Great Mell Fell as we cross over to the gill. 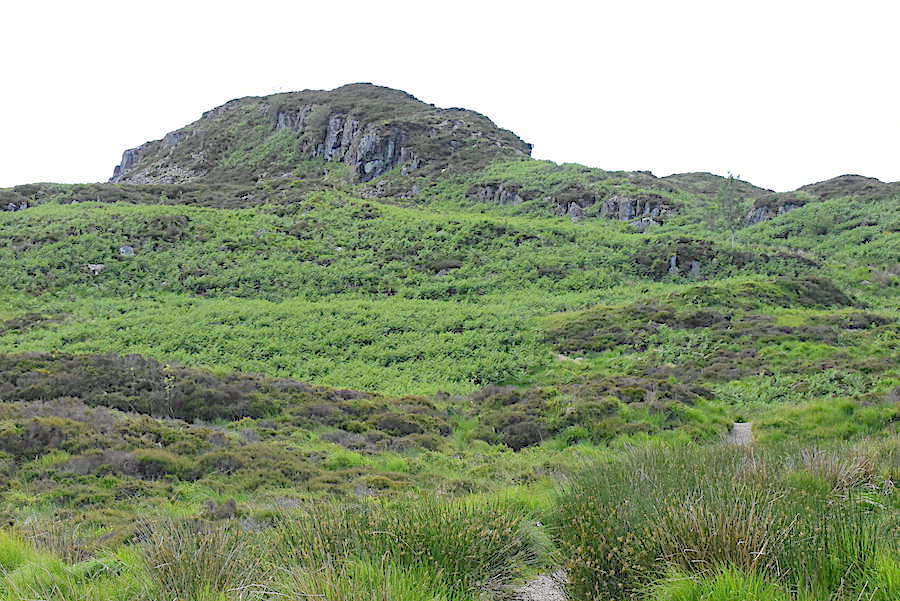 The final section of the path up to Airy Crag, the name given to the summit of Gowbarrow Fell. This is part of the lovely terrace path around the Ullswater side of Gowbarrow. 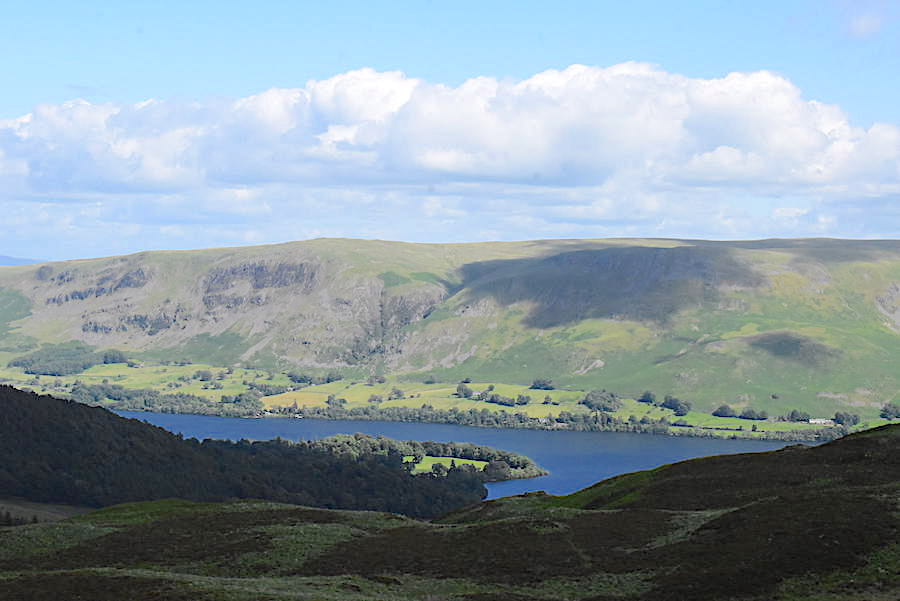 We’re in deep shade again while Arthur’s Pike and Bonscale Pike across Ullswater enjoy their brief sunlight allowance. From Gowbarrow summit the views of Ullswater are restricted, mostly by the extensive area of Gowbarrow itself, better views of the water can be had from one of the many minor tops over to the east. 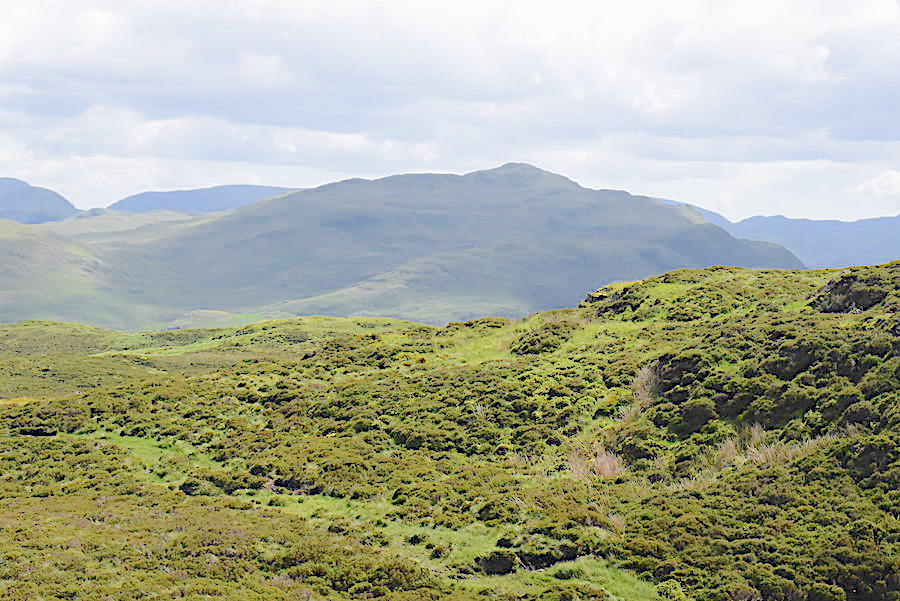 The wind speed had increased rapidly on the top so we only stayed long enough for a few shots. The views to the south weren’t great but this view of Place Fell, although in half shade, was distinctive enough. Any further round to the right just wasn’t worth the effort, or the discomfort, thanks to the cloud and the wind. 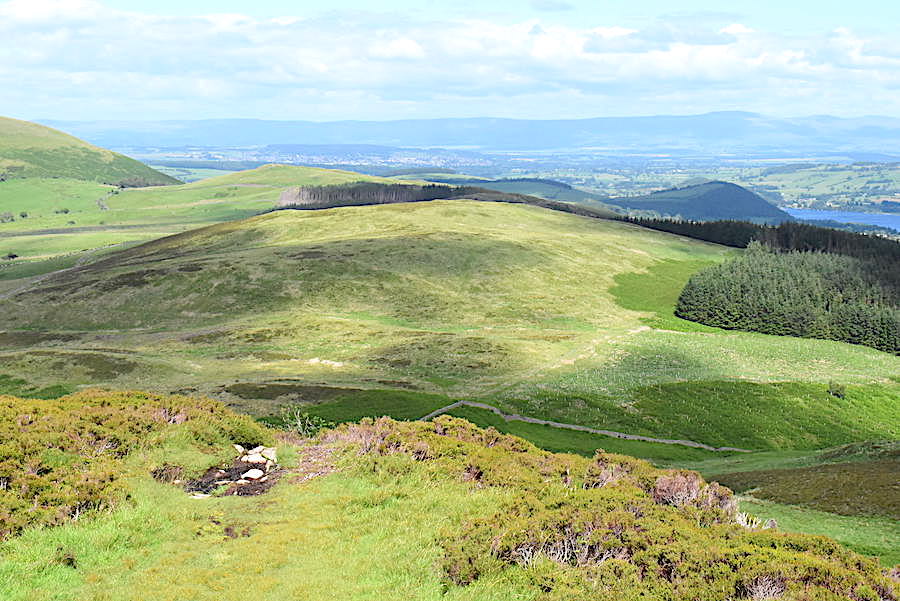 A sunny view of Great Meldrum from Gowbarrow top ….. 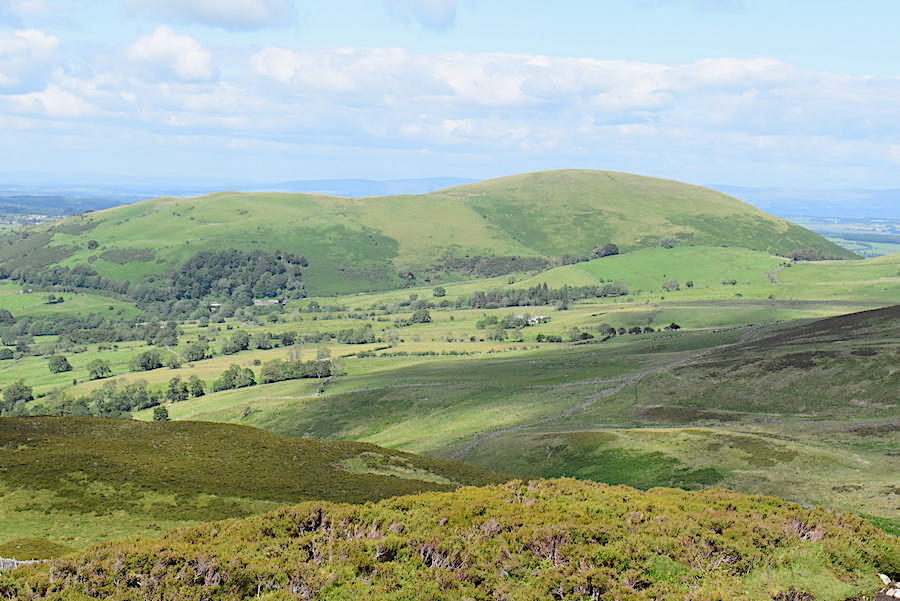 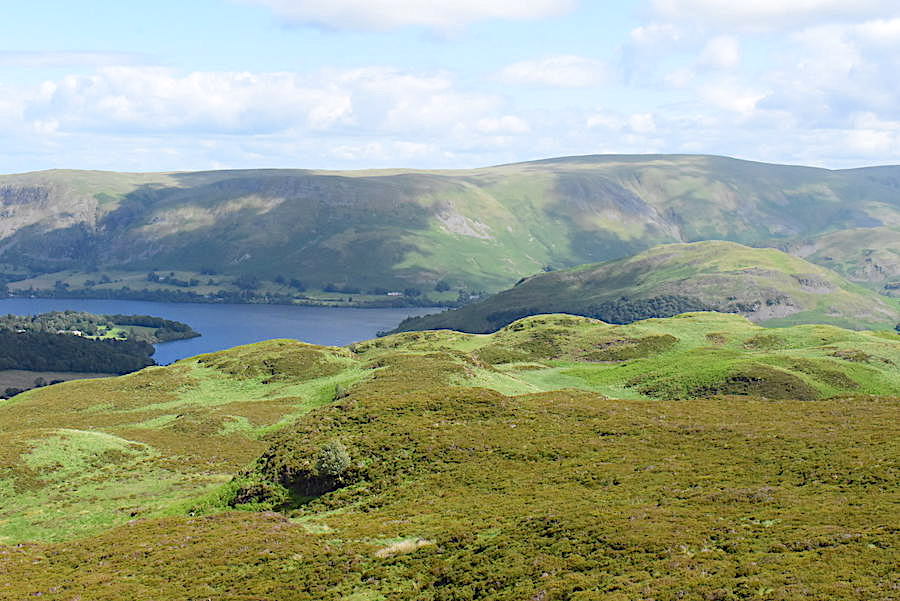 Over to the right, sandwiched between us and Loadpot Hill, is Hallin Fell. 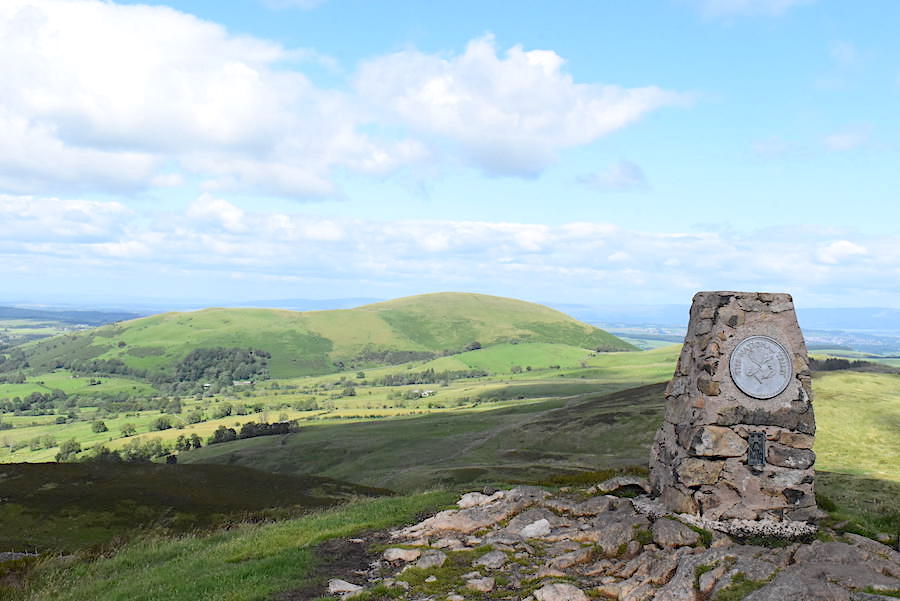 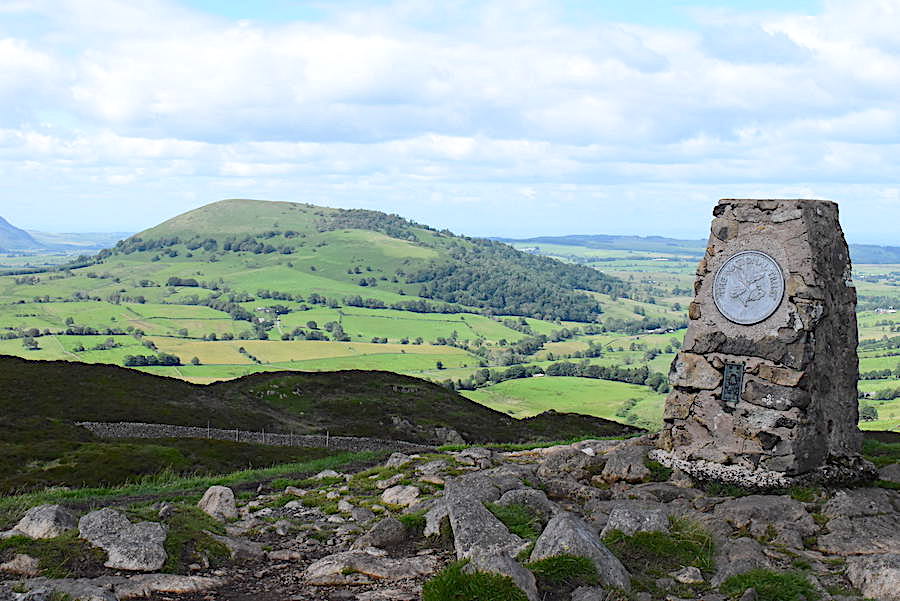 ….. then its the turn of Great Mell Fell to have its photo taken with the trig column. 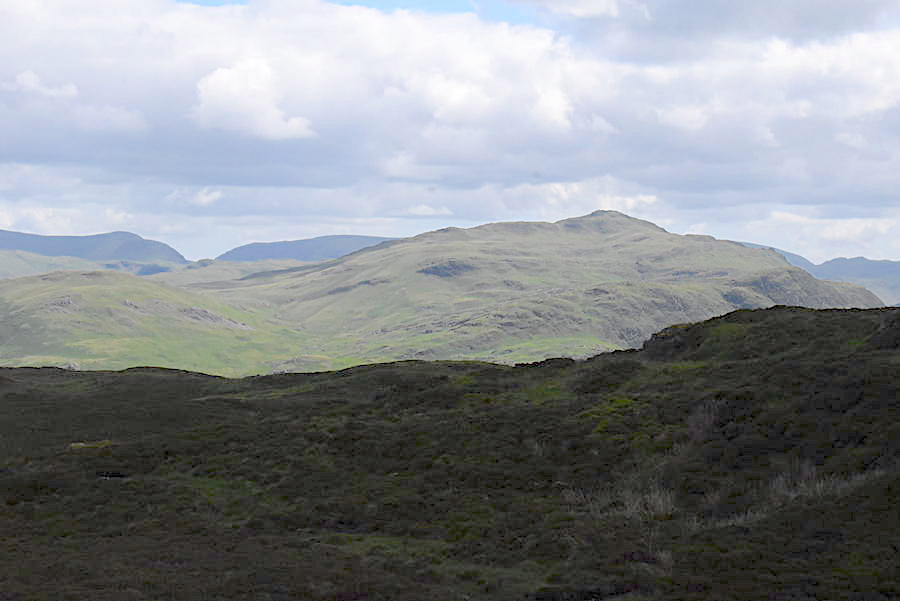 We’re plunged into gloom again as another large cloud drifts by but, on the other side of Ullswater, the lights have been switched on over Place Fell. 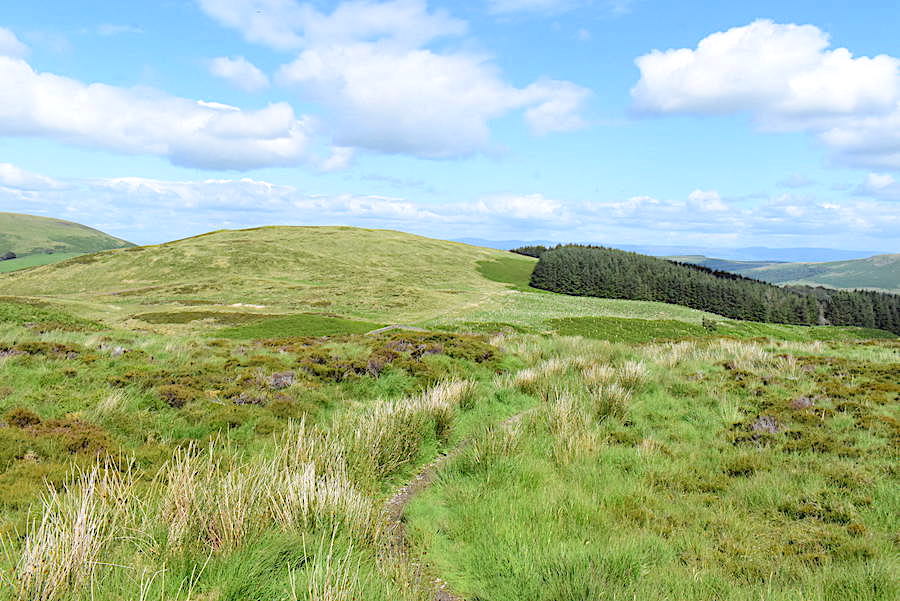 Time to get out of the chilly blasts so we dropped down off the summit and made our way over to Great Meldrum. The wind settles down to a manageable gusty level, a large area of blue sky arrives and we have a pleasant walk all the way back. 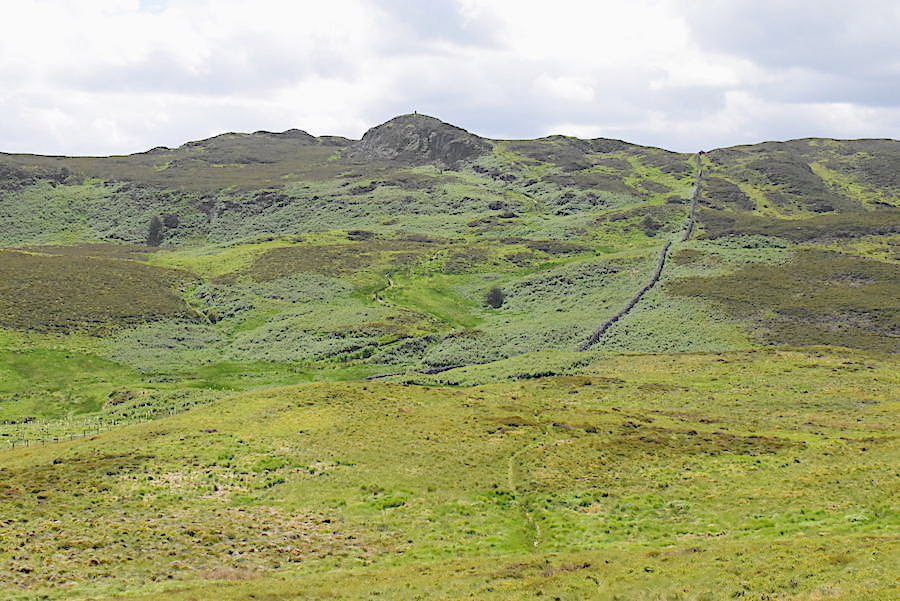 A look back to Gowbarrow, and the cloud blanket coming in behind it, from the gentle climb up the slopes of Great Meldrum. 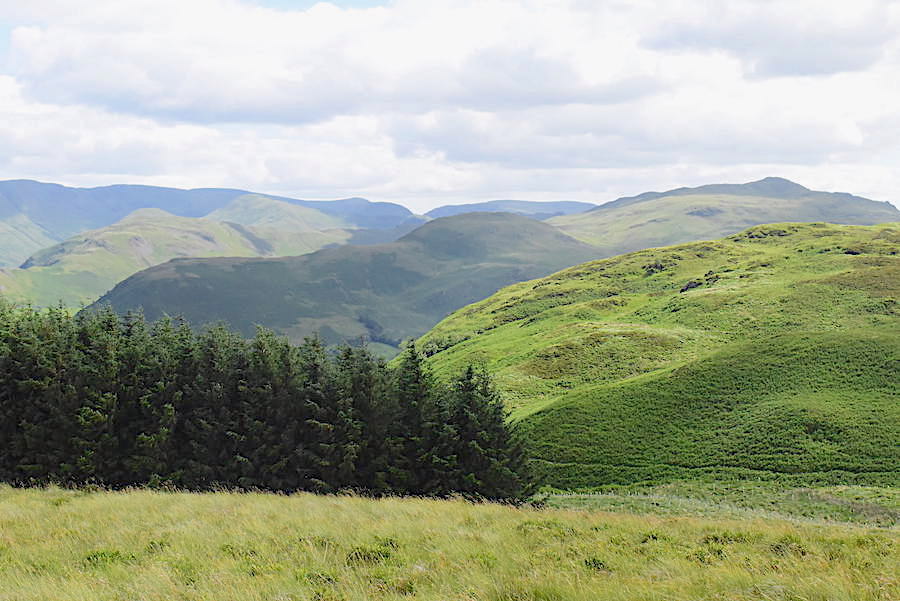 The sunny spell illuminates the terrace path as it snakes across the bracken covered slopes of Gowbarrow. Behind it is cloud dappled Place Fell, on the right, and a sunny Beda Fell on the left. 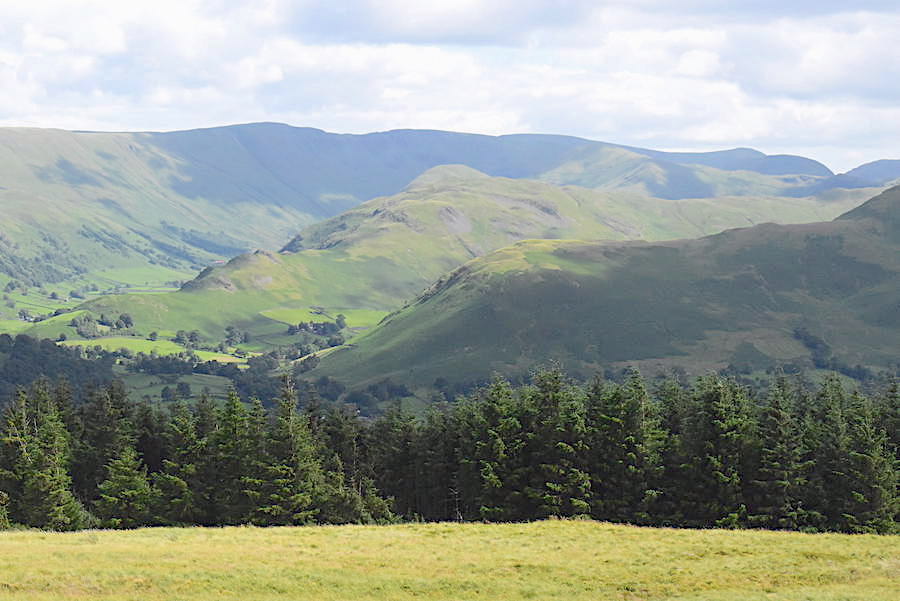 A closer look at Beda Fell with the extensive Arthur’s Pike/High Raise ridge on the skyline behind it. 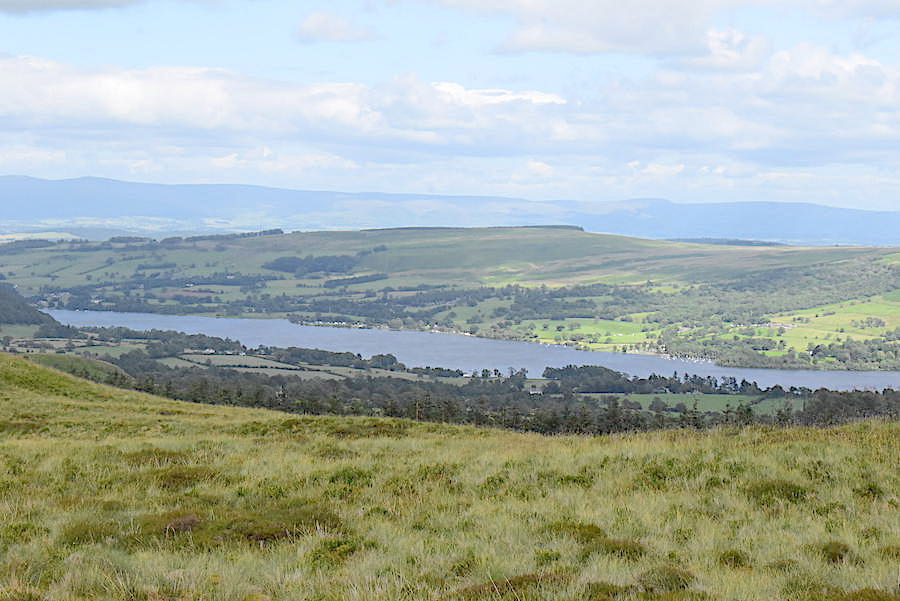 Heughscar Hill on the far side of Ullswater, and the north Pennines on the skyline. 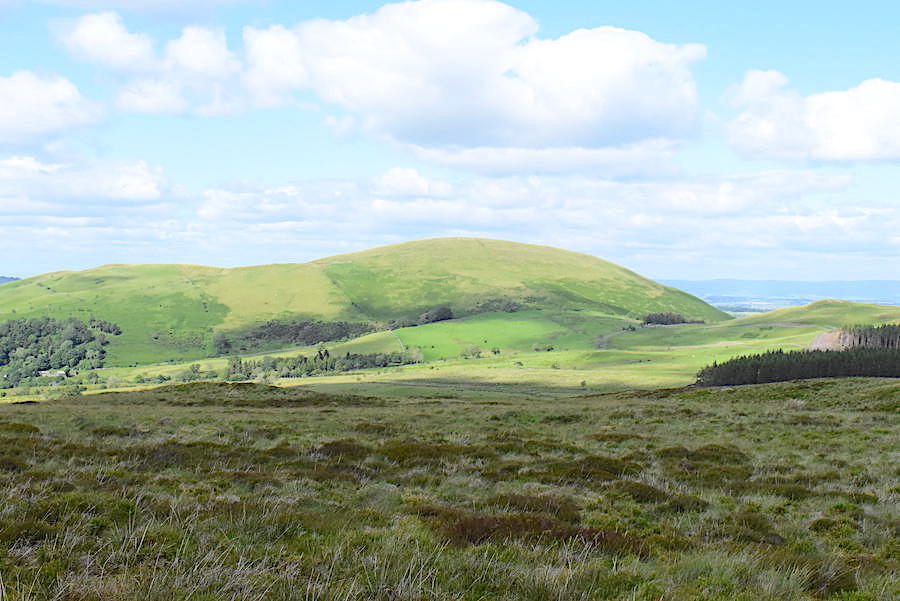 Little Mell Fell as we make our way back. 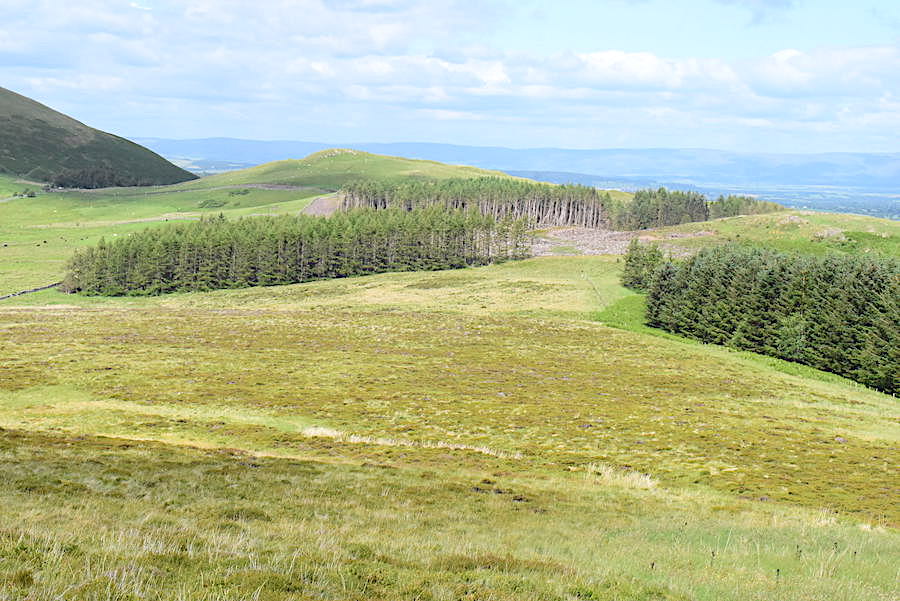 The thin grassy path we are following takes us down to the fence line on the right, goes through the fire break between the two plantations ….. 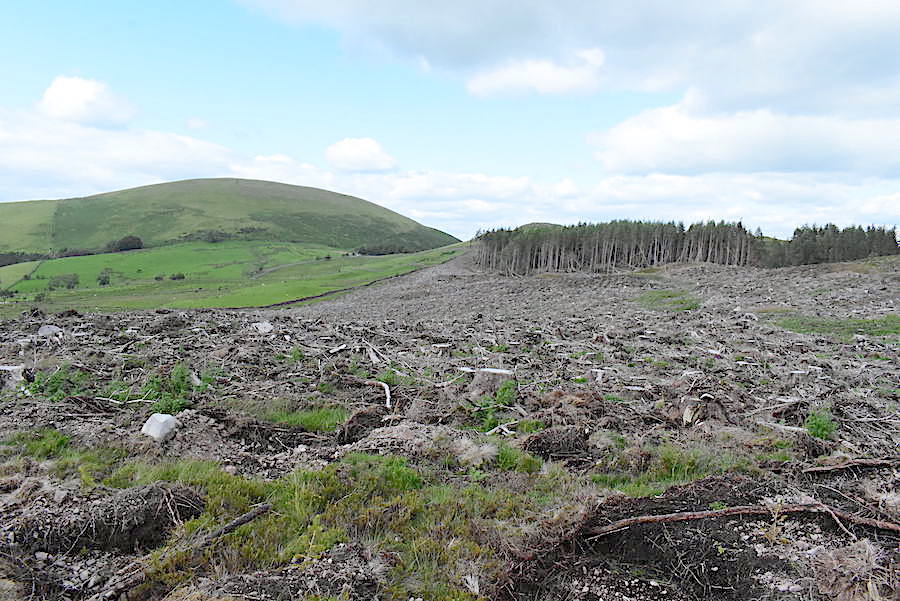 ….. and then comes to a grinding halt. We picked our way over towards the green area on the right which was largely free of tree stumps and was probably where the path was before all the felling took place. It had definitely been used by forestry machinery and vehicles. 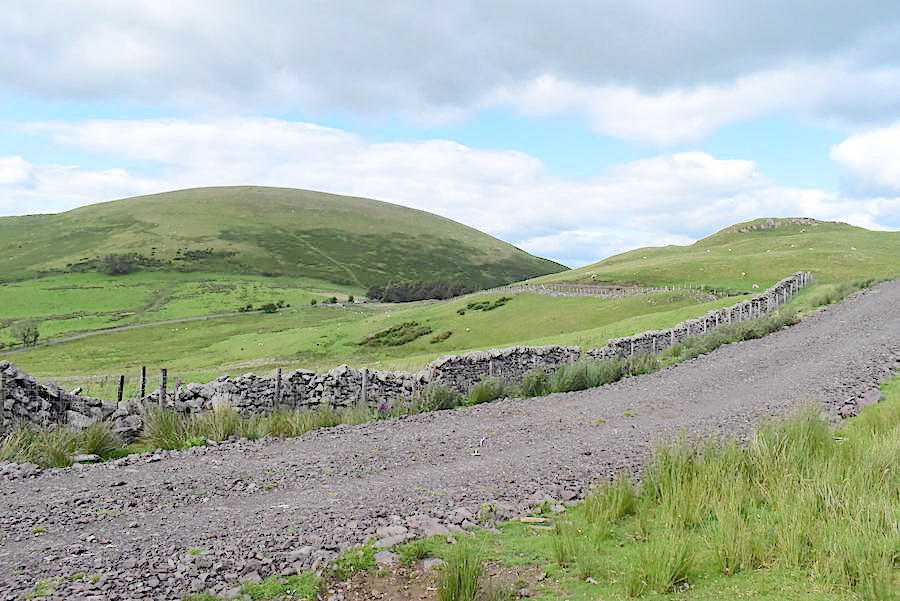 So once across the brash we’re back on the track again and from here there’s just a short walk back to where the car is parked at The Hause. As the shot shows the blue sky is rapidly moving away and behind us the clouds have closed ranks and turned an all too familiar shade of dull matt grey. Anyway, be that as it may, at least we’ve managed to get outdoors for a couple of hours and the weather was OK for the most part. The outlook for the next few days isn’t looking very promising so it looks as though the dull skies and low cloud will still be around for a while, ho hum.