Despite an encouraging forecast for today, i.e. a sunny morning with cloud building during the afternoon, things didn’t look at all promising to begin with. The usual grey woolly blanket of featureless cloud was still hanging over us, light levels were low and the sunny morning was nowhere to be seen. So we put our departure on hold and decided to wait and see. After about an hour we began to see chinks of blue sky appearing, the grey woolly blanket began to break and drift away westwards, and behind that much brighter skies could be seen coming in from the east presenting us with something of a dilemma. We had planned a walk to the west of us which meant about an hour’s travelling before we could even begin our walk. If we stuck with that plan we would obviously be travelling in the same direction as the cloud and would probably arrive at our start point in the same sort of conditions we’d left an hour earlier. We decided that if the brighter skies were coming in from the east then it made much more sense to stay in the east and have a walk close to home instead. We decided on Wet Sleddale, which is quite close to where we live and which takes up very little travelling time. It isn’t named Wet Sleddale by chance and after almost three weeks of daily rain it more than lived up to its name today. Still, none of the wet stuff fell from the sky, there were no gale force winds, and the sun managed to appear from behind the numerous clouds often enough to make it a very pleasant outing. 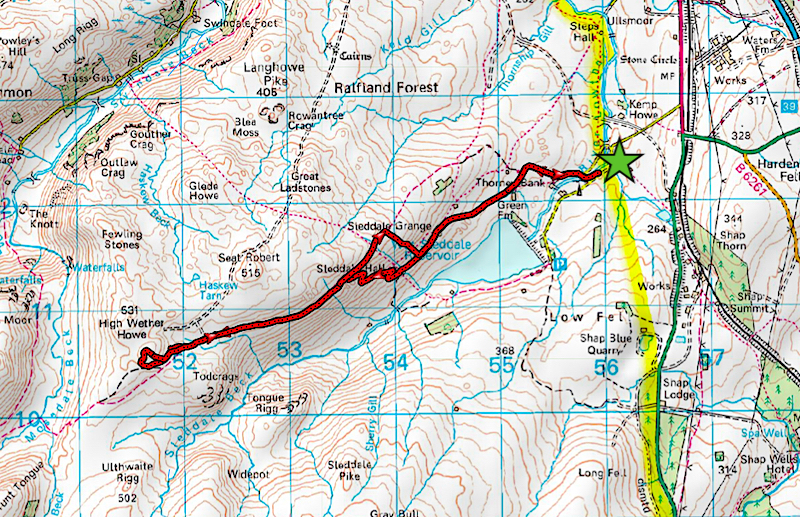 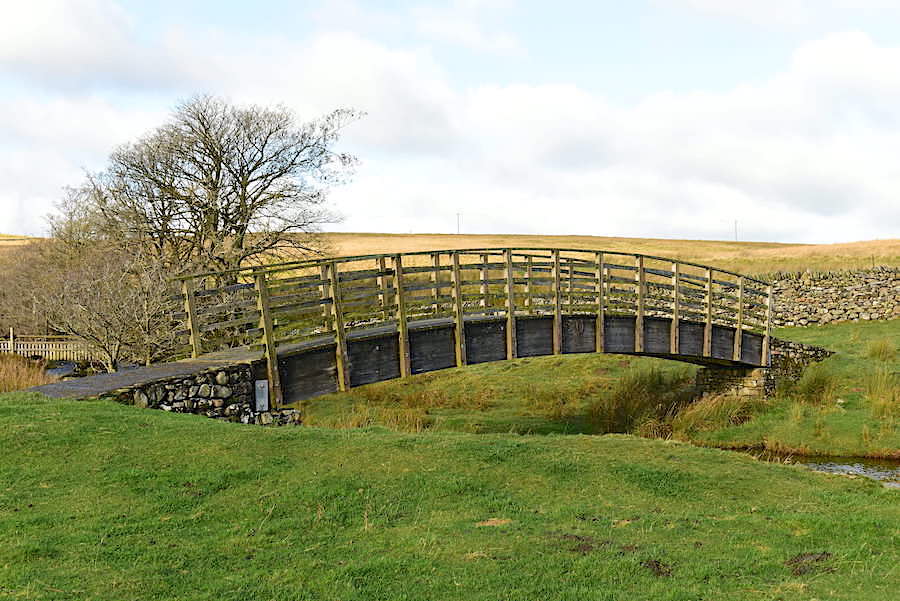 As usual we parked off road at Cooper’s Green. It didn’t rain too heavily yesterday but the ground is naturally still very wet so its wise to take care when parking on the soft grass verges, and several churned up tyre tracks bore testament to that. A very short walk from the car led us to this bridge across the River Lowther. 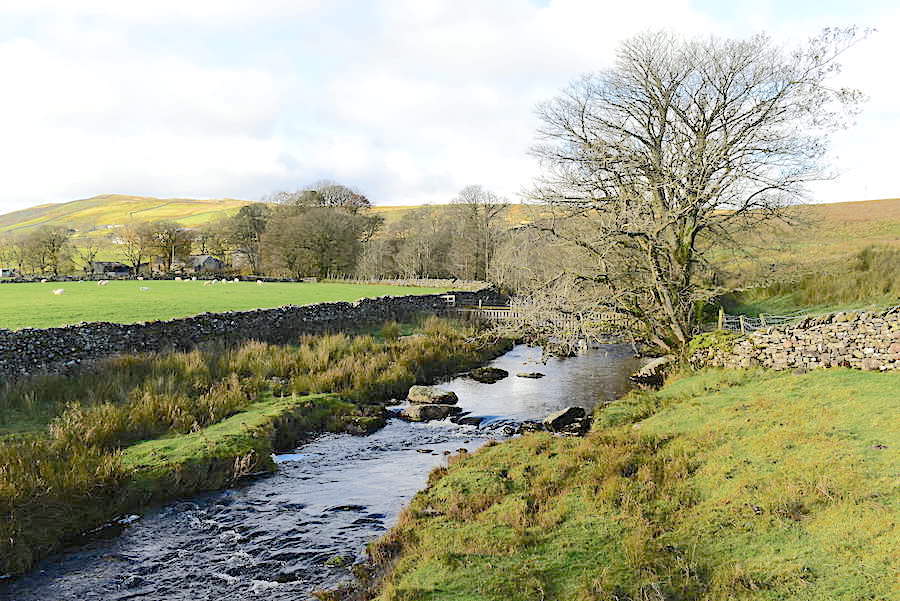 The view upstream as we crossed the bridge. From the bridge there’s just a few steps up a grassy bank to the tarmac farm access lane and which comes to an end at Sleddale Grange. 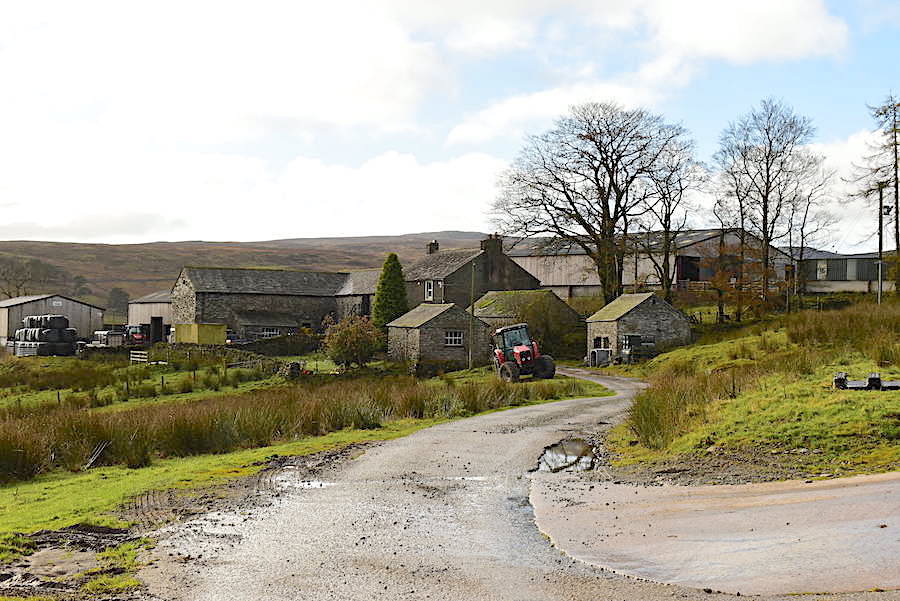 Passing Green Farm as we continue along the tarmac lane on the right. 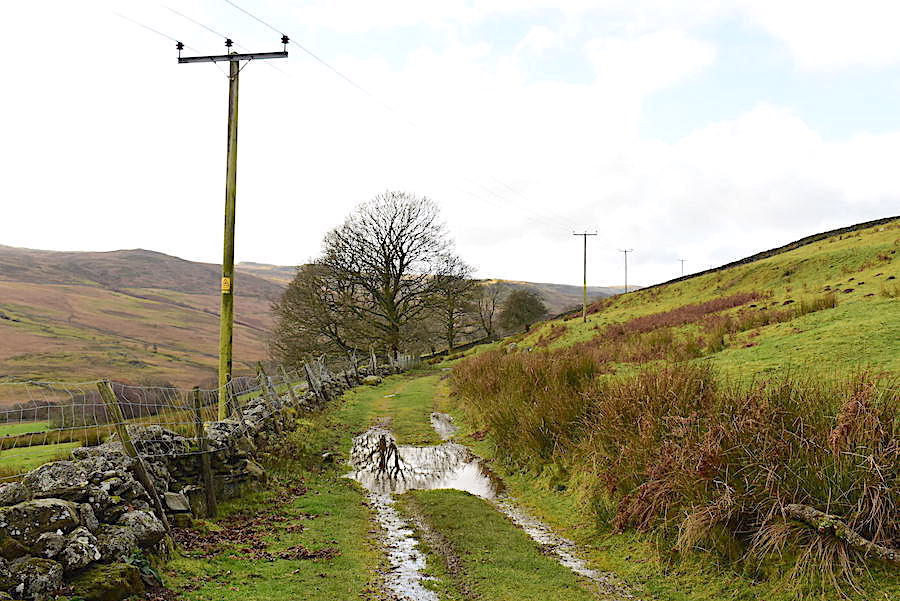 Sleddale Grange, where the tarmac comes to an end, is just behind me and the path now changes to a grassy green lane, with an abundance of puddles along the way. Mud, mud, glorious mud ….. as the old Flanders and Swann song goes. If you have no idea to what I am referring no doubt You Tube will oblige. 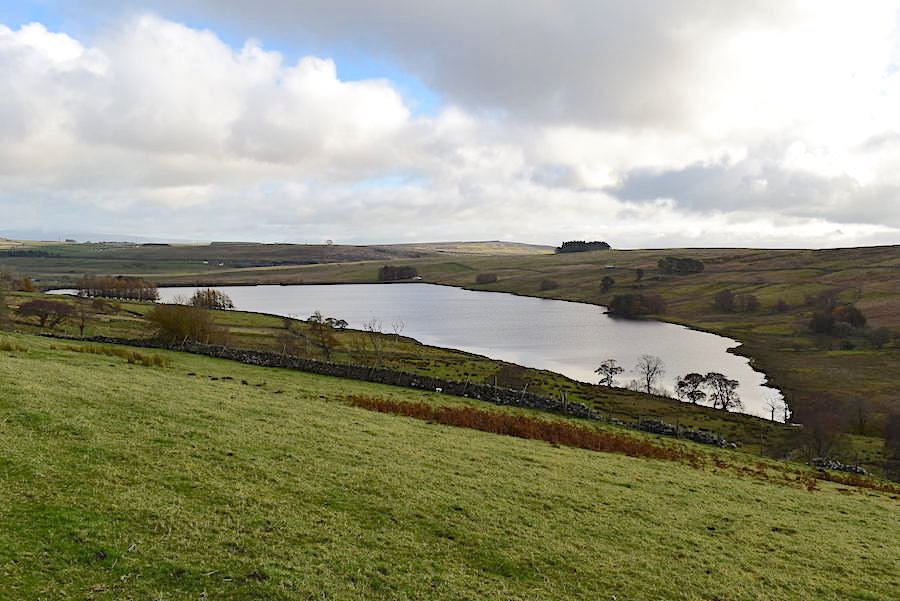 Despite the grey woolly blanket breaking up lots of very large clouds were still drifting around so we had quite a few duller periods as well as the sunny spells. Here’s a view of Wet Sleddale reservoir as we walked the path beyond Sleddale Grange. 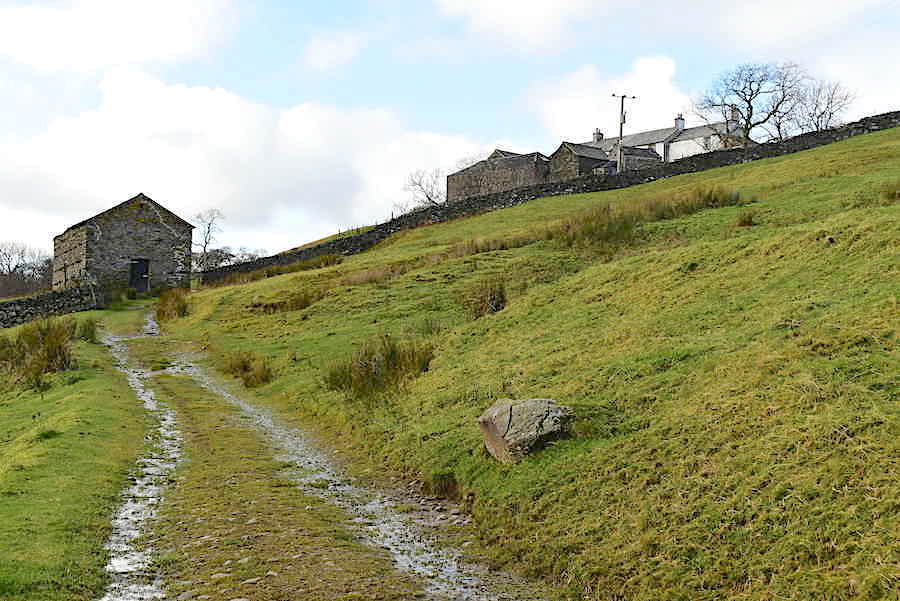 A little further along and Sleddale Hall comes into view. A car was parked in the flat area just to the right of the barn ahead so perhaps the owner is in residence at the moment. He lives in Kent, or did at the time he bought the property, so perhaps he’s decided to sit things out in Wet Sleddale for the duration. 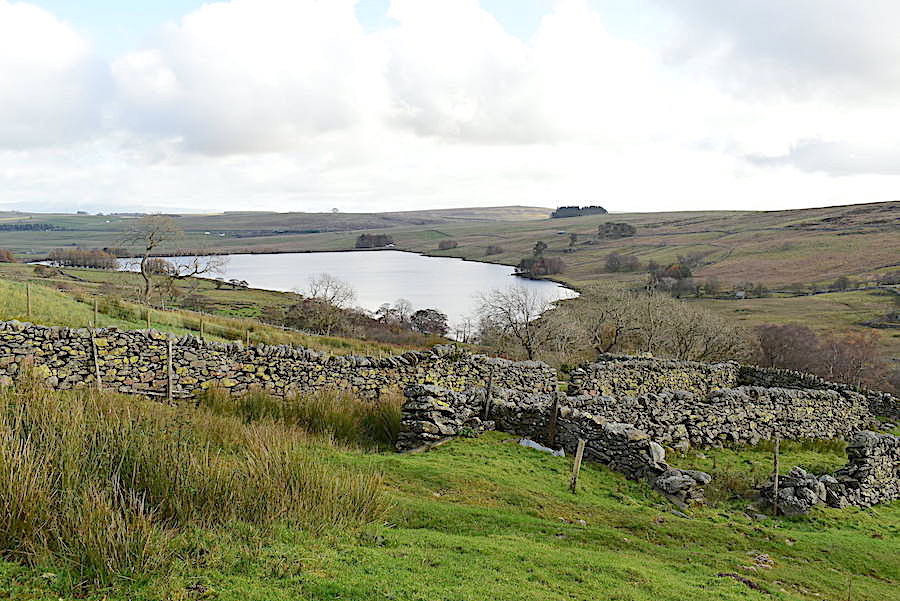 We’re just beyond the Hall at this point and the clouds refused to move away so its a rather gloomy shot of this look back at the reservoir. 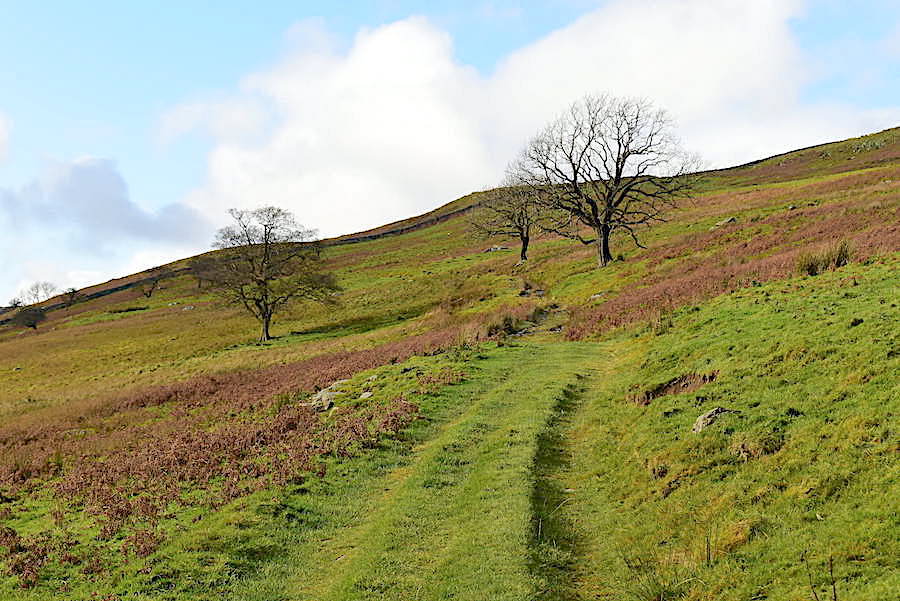 The view ahead as we continue along the green path ….. 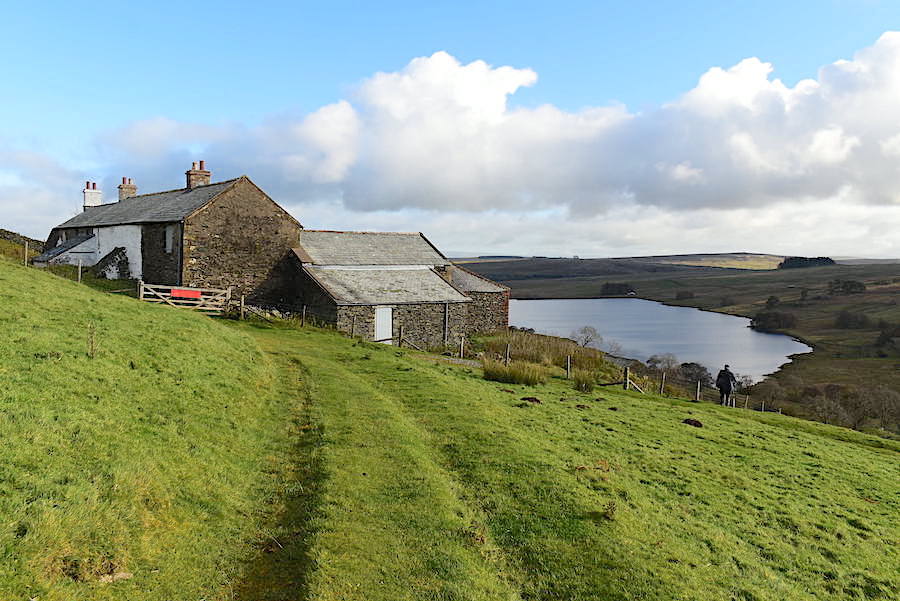 ….. and the view back from the same spot. 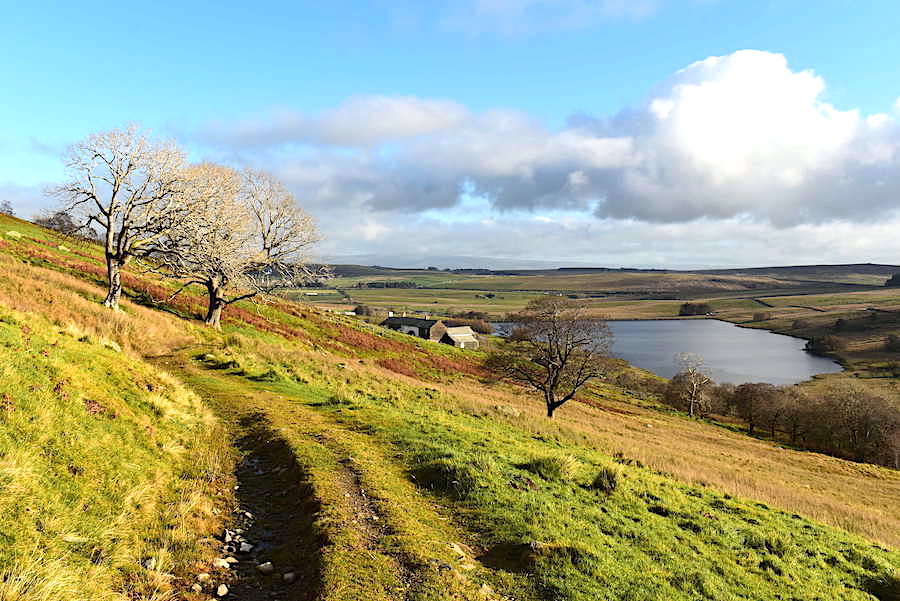 We’re much further along the path at this point and enjoying the sunny spell which, unfortunately, did not extend across the reservoir as I took a look back. 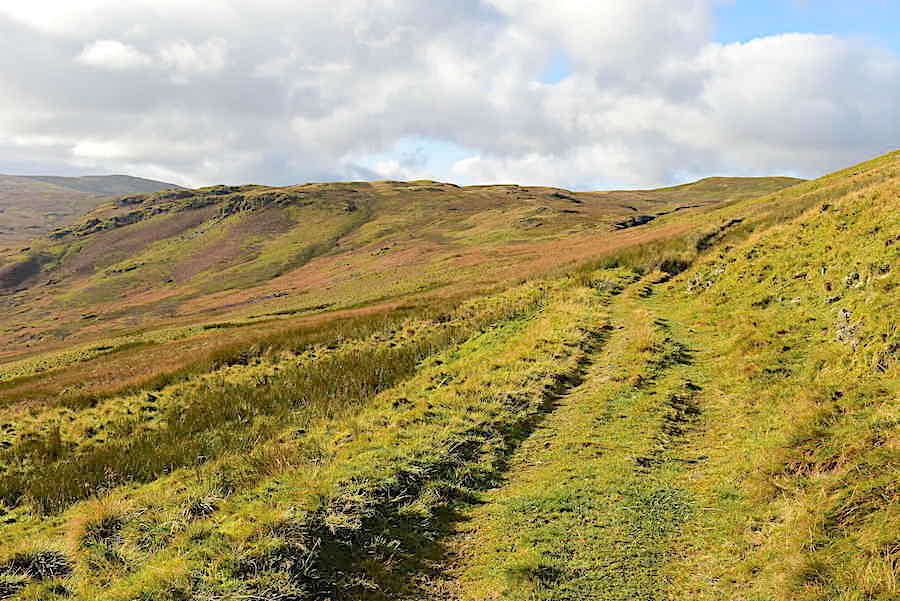 Looking ahead towards Todcrags, the flat topped hill to the left, with Scam Matthew over on the right. 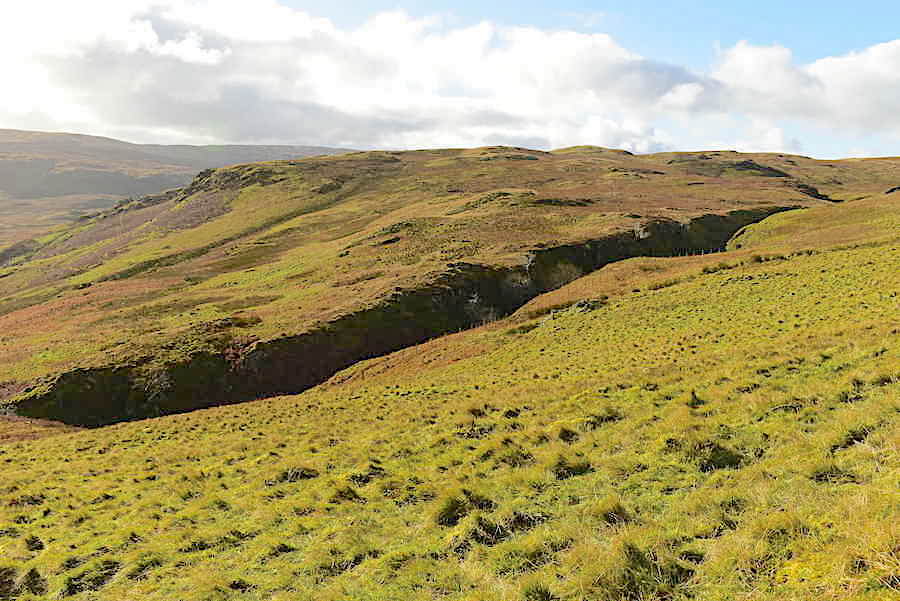 Todcrags again, and in the deep ravine between it and us is Sleddale Beck making its way down to the reservoir. So much water was pouring over the waterfalls in this  beck ,and Tonguerigg Gill on the other side of the crags, that the sound could be heard all the way along the valley. 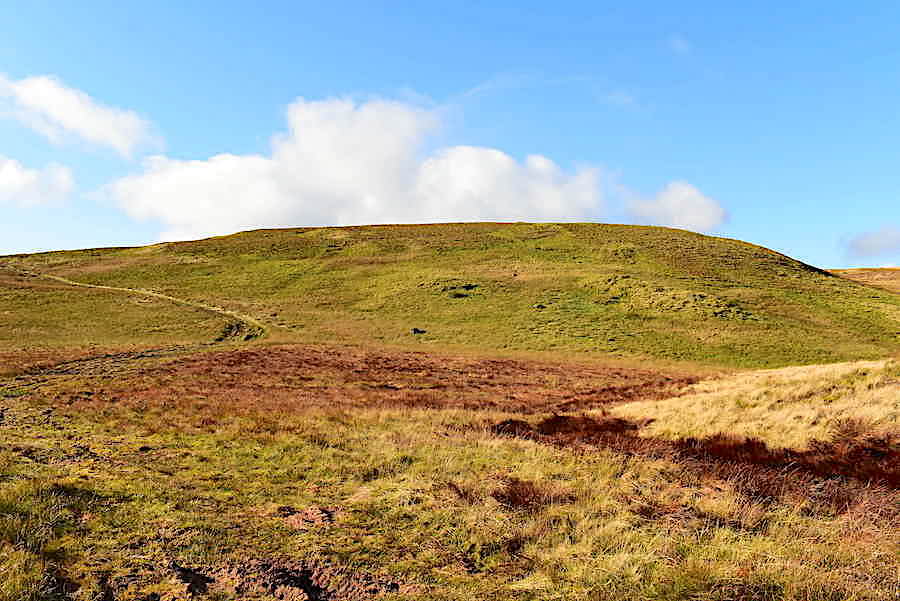 Heading over towards Scam Matthew. The grassy path eventually gives way to something very soggy and very spongy after passing through a gate in the last wall before meeting the open moorland. It is nothing other than a route over some very churned up moss and long coarse grass, it is not a path in any true sense of the word. 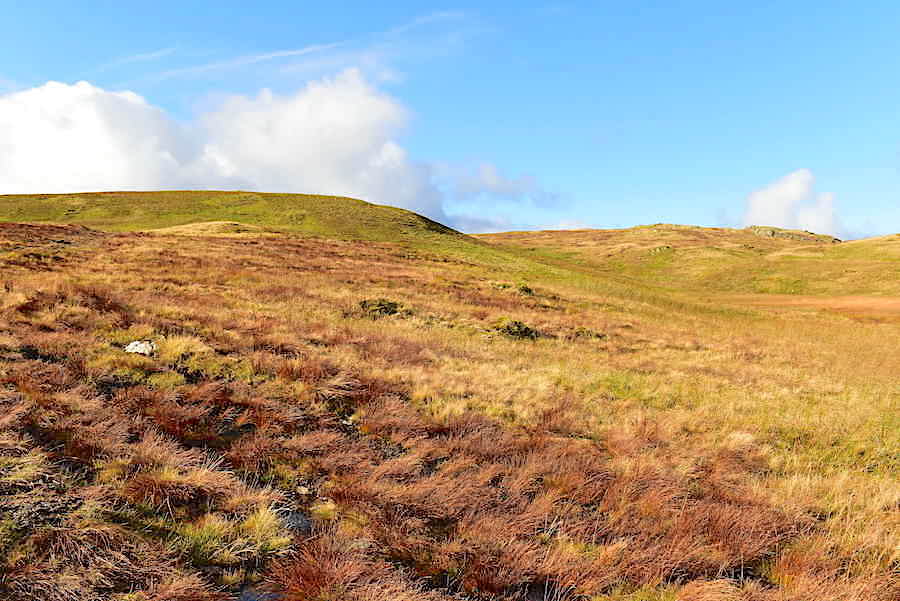 Left is Scam Matthew, right is High Wether Howe. Taken from the ‘path’ which as you can see has only a very slight incline and would not even be noticed ordinarily. Its a very different kettle of fish altogether though when the ground underfoot is covered in saturated moss, grass and mud and the foot you’re standing on sinks further in at the same time as you’re attempting to pull the other one out. Squelch, slurp, curse, best describes our progress along here! Well, it is Wet Sleddale after all. 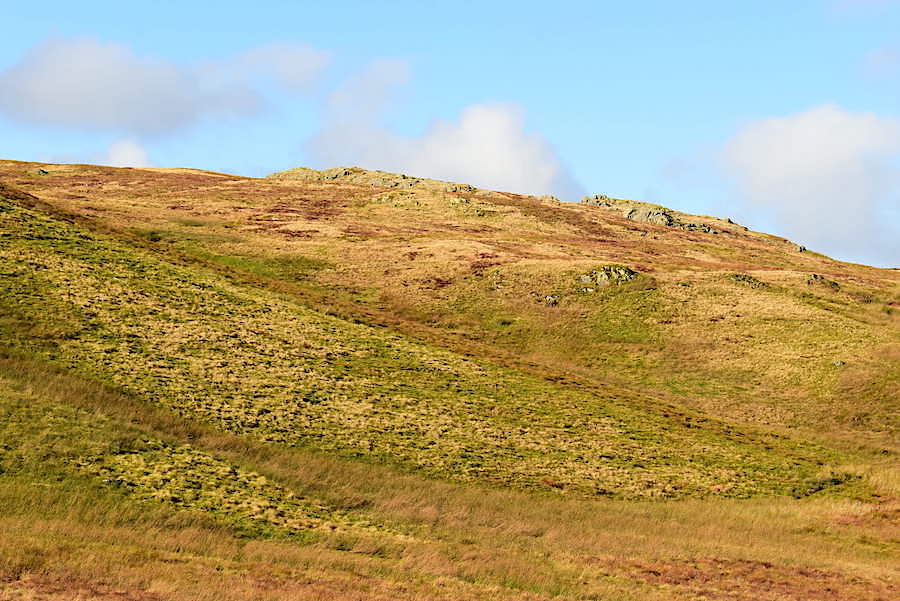 A look over towards High Wether Howe as we make our way towards Scam Matthew. Perhaps Scam Matthew is an appropriate soubriquet for our current Secretary of State for Health and Social Care? 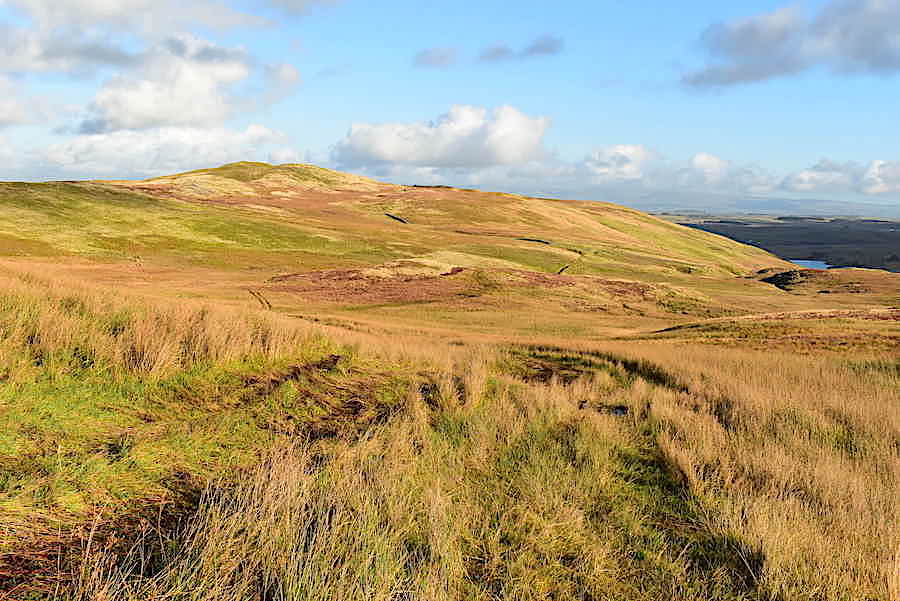 A look back at Seat Robert as we make our way up alongside Scam Matthew. 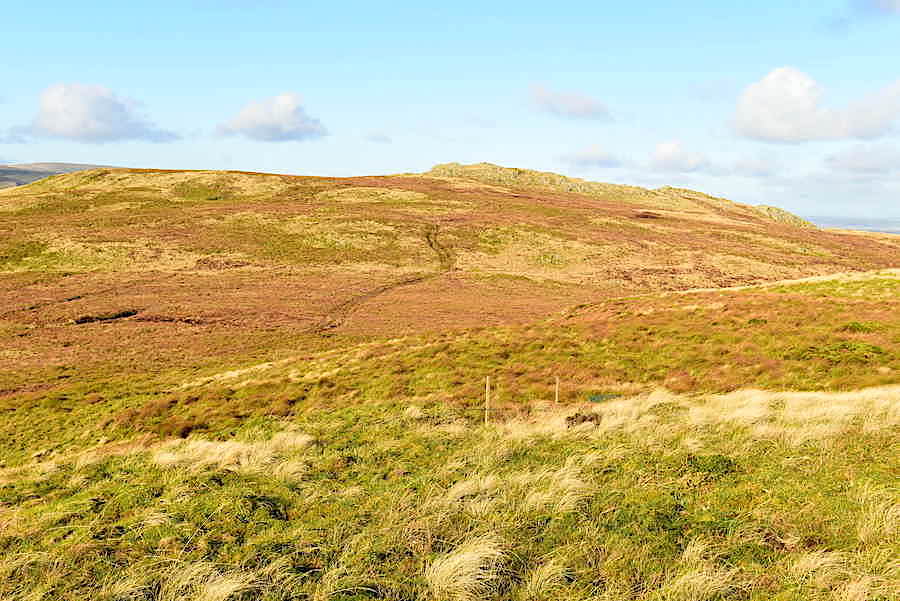 High Wether Howe from Scam Matthew. We were over there on 19th April this year but we’d had quite enough of the battering we were taking from the very cold east wind so we didn’t bother crossing over to visit Scam Matthew on that occasion. 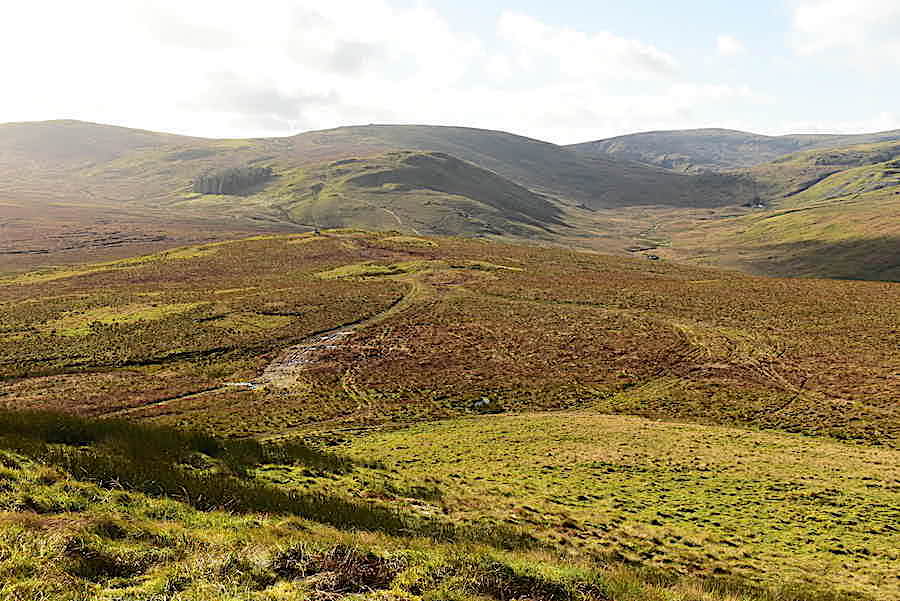 Looking south west into Mosedale from Scam Matthew and a zoom in will just about reveal the white buildings comprising the Mosedale Bothy over on the right of the valley. On the skyline from left to right are: Harrop Pike, Tarn Crag and Kentmere Pike. 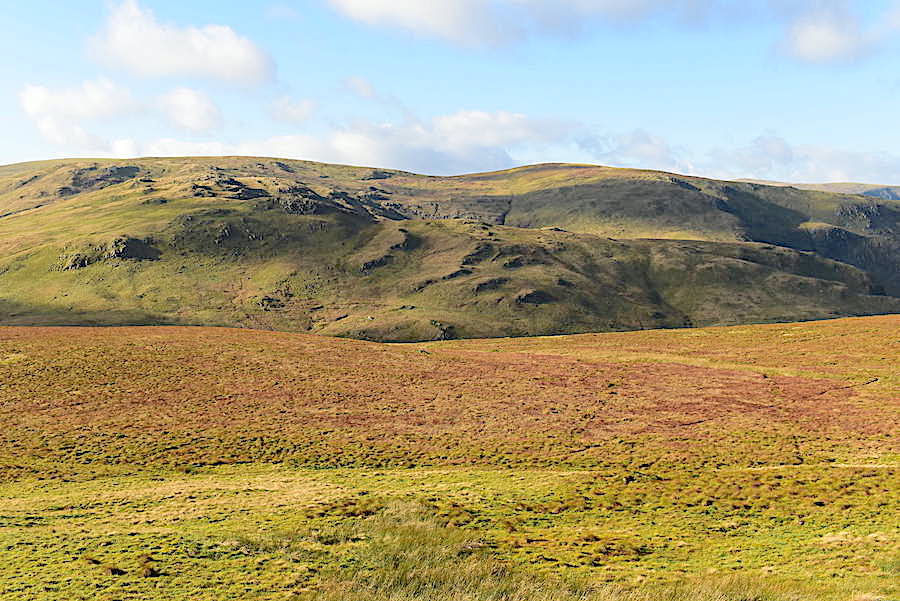 Scam Matthew is only a low hill so it doesn’t take much climbing and there isn’t a cairn, or anything else, marking the summit. Here I’m looking across Swindale Common towards Nabs Moor and Howes and between them and us Mosedale Beck will be making its way down to the very attractive Forces Falls in Swindale. 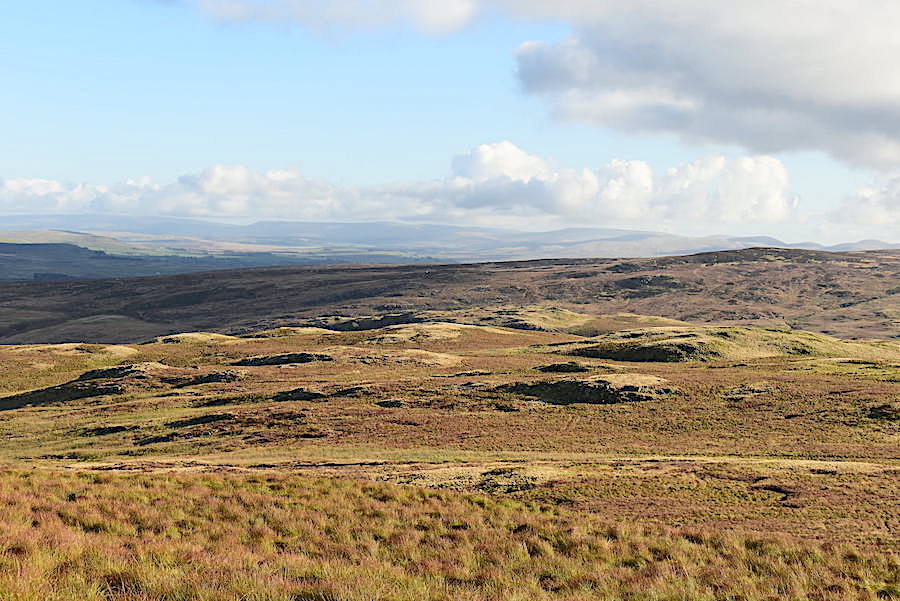 Dropping down from Scam Matthew you get a view of the humps and bumps across the top of Todcrags. The Howgills are on the right in the distance, Mallerstang Edge to their left. 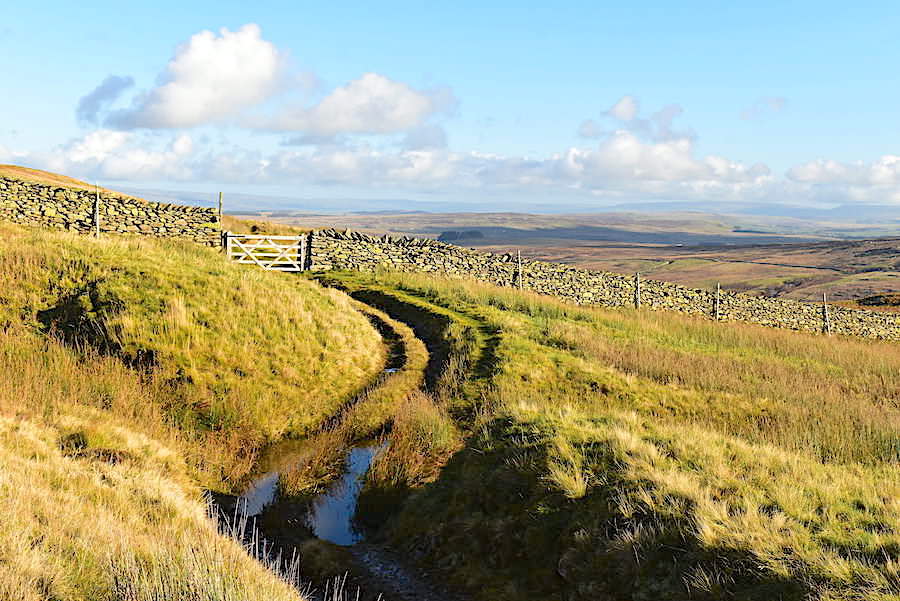 We rejoin the watery route back to the gate, beyond which a much firmer path awaits us. Firmer doesn’t mean that it was any drier but at least it meant we weren’t sinking into a morass with every step. Not that it mattered much as just about everything from the knees down was on the soggy side anyway. Do we care? Not at all, its just good to be out in some decent weather at last. 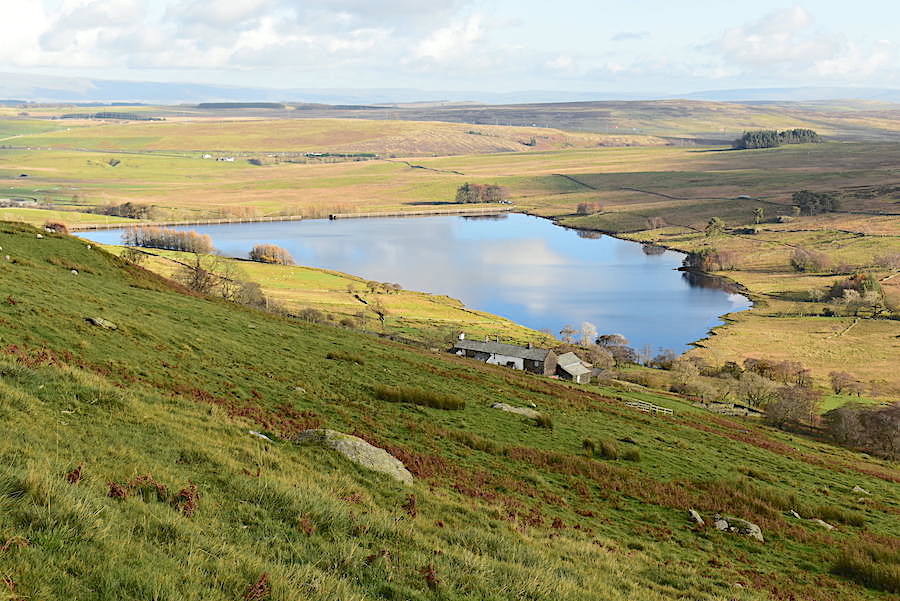 We’re well on the way back now as we pass above Sleddale Hall, where the cloud drifted away and I got a sunny shot of the reservoir at last. 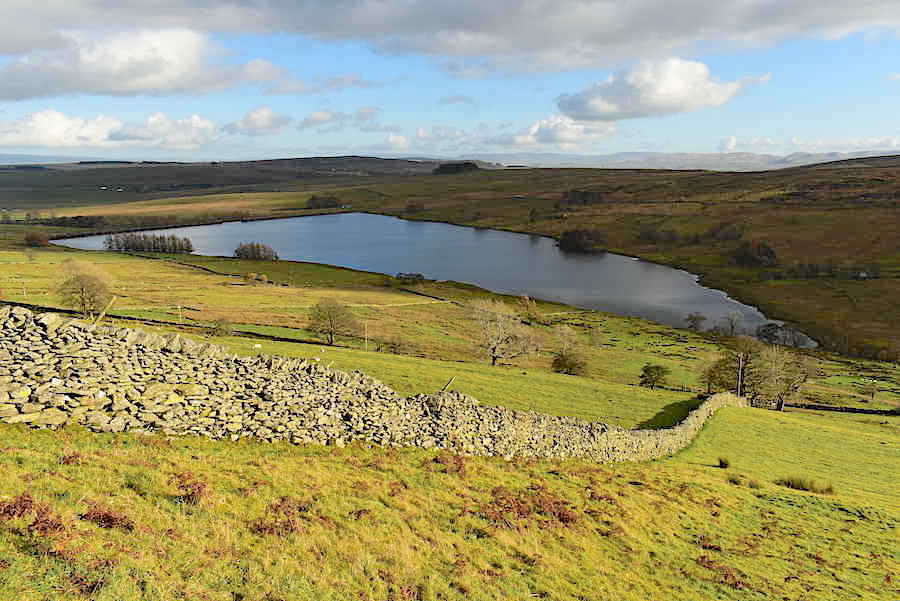 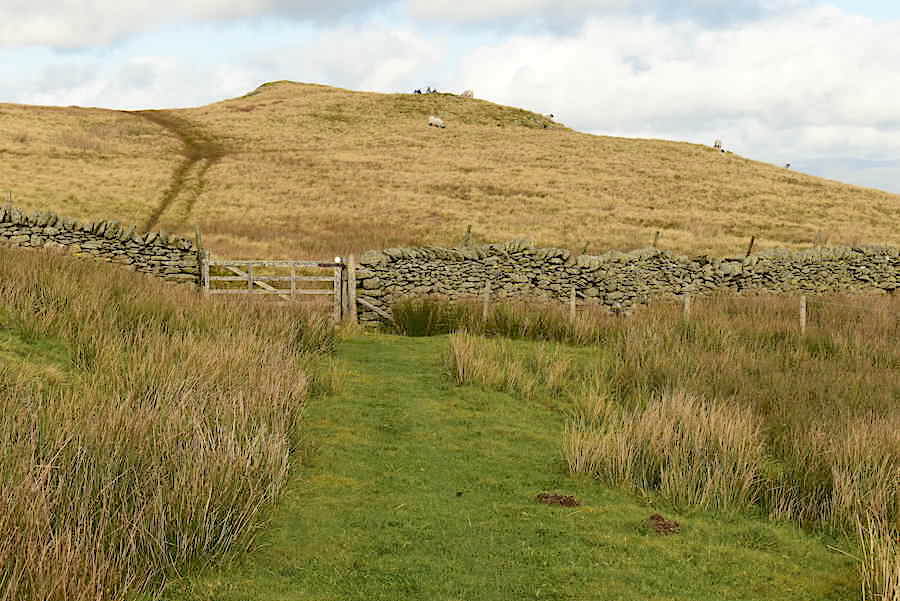 White Crag up ahead which a group of walkers were just beginning to leave. We followed the path up to the top and followed it around for a short distance as it began descending over on the right. We then turned right off the main path, crossed a wall at a low point (no gate or  stile) and made our way back down to ….. 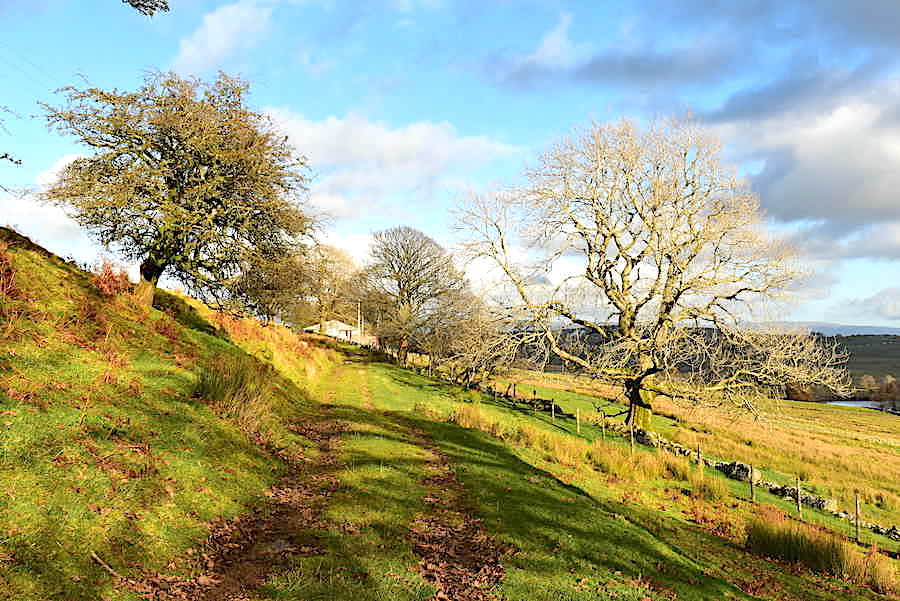 ….. the path we had used for our outward leg and headed towards the buildings at Sleddale Grange. Alas the recent gales have stripped the trees bare of their autumn leaves so we haven’t really had much of a glorious show of colour. The leaves were only just beginning to change colour before the strong winds came along and blew them away and that seems to have been the pattern for the last two or three years. It was a warm and sunny walk back for the most part, warm enough to have been down to short sleeve level if we could have been bothered to remove our jackets. 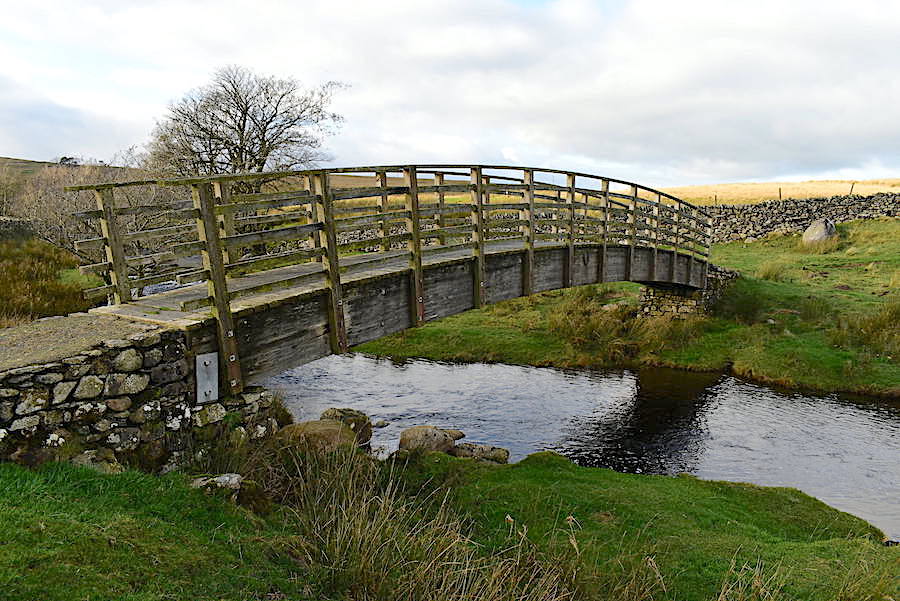 Back at the bridge where we were still talking about an amusing little incident which had take place about ten minutes beforehand. We were walking along the narrow tarmac lane and just past Green Farm we stepped aside to let a car go by. It stopped next to us and we could see an elderly couple inside. Down came the passenger side window and the driver asked if he was on the right road for Pooley Bridge. He explained that in his youth he’d cycled to Pooley and remembered turning left off the A6 and going on to Pooley, but the lane he was now on didn’t look quite as he remembered it. This took me aback somewhat as I had expected something along the lines of ‘Is this the way up to Sleddale Hall?’ We told him that he needed to drive back to the A6, then turn left as if heading for Penrith, and then at the mini roundabout at Eamont Bridge take the left turn for Yanwath and from there head straight on for Pooley Bridge. He thanked us, put the car into reverse and started to back up all the way along to the A6. I waved for him to stop, which he did, and I pointed towards Green Farm about 100 yards up the road where he could turn the car around very easily and drive back to the A6 in forward gear rather than reversing all that way. I hope they made it to Pooley (without any more erroneous left turns), I’m guessing they wanted to view the new bridge, that they enjoyed the rest of their day out and rounded it off with a nice cup of tea and a slice of cake in one of the village tea rooms. The bridge is now in place and can be driven over, although the landscaping and minor finishing touches to the bridge still have to be completed. Next month, on 5th December, it will be five years to the day since the old bridge was washed away during Storm Desmond, an event which still raises a lump in our throats.