The forecast wasn’t good for today but we’ve been confined to barracks for the last week or so thanks to the snow, sleet, strong winds, low cloud and even lower temperatures, plus my back problems, so we were keen to get outdoors again if only for a short walk. Some fresh air and a low level walk would do wonders for morale and provide a moderate amount of exercise for me and my piriformis muscle. No, I hadn’t a clue what it was either, or even that I had one. To be strictly accurate I have two, as we all have, one on the left side and the other on the right. Its quite a small muscle but it plays an important role in rotating the femur and keeping the body in balance as we move around. Its big drawback is that it lies directly across the sciatic nerve so any tightness in the muscle can lead to the sciatic nerve being compressed when walking, climbing or sitting which results in the piercing pain I’ve been experiencing. So after another session of deep massage last week and sticking to a thrice daily round of stretching exercises things are at last beginning to improve. A steady walk along the Thirlmere shore with a return route over the lower slopes of the Helvellyn range should provide just about the right level of exercise so, with the microspikes and wet weather gear packed, off we went. 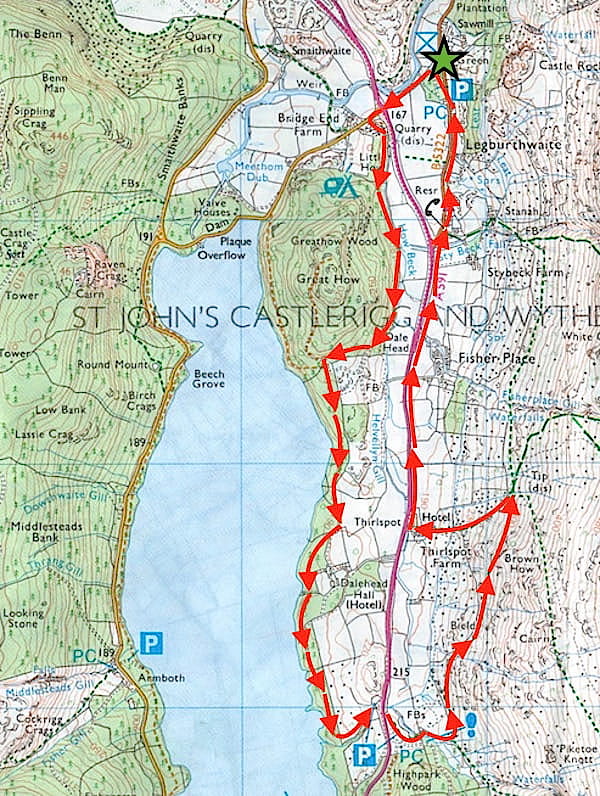 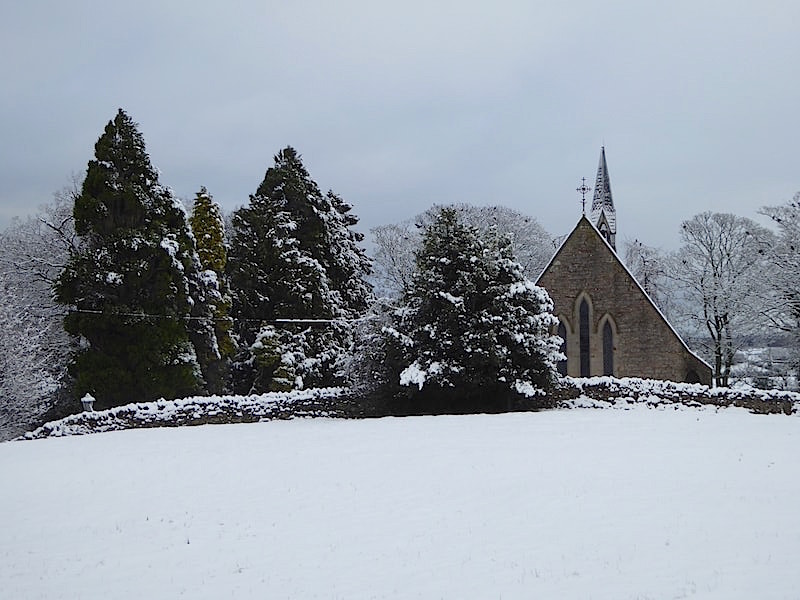 Heavy snowfall overnight created this pretty scene which awaited us when we opened the back door this morning ….. 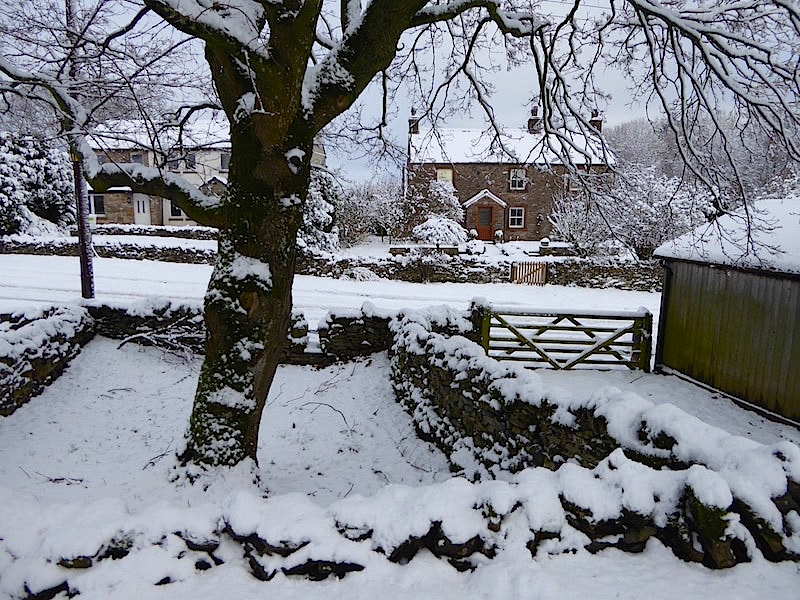 ….. together with this one, taken from the front of the house as I waited for a good three inches of snow to be brushed off the car before we could get under way. Then there was just the little matter of which snow bound back lane we should use to get ourselves out of the village and onto the A6.  All the main roads had been gritted so once out of the village we had a clear run to the A66 and over to St John’s in the Vale and Thirlmere. 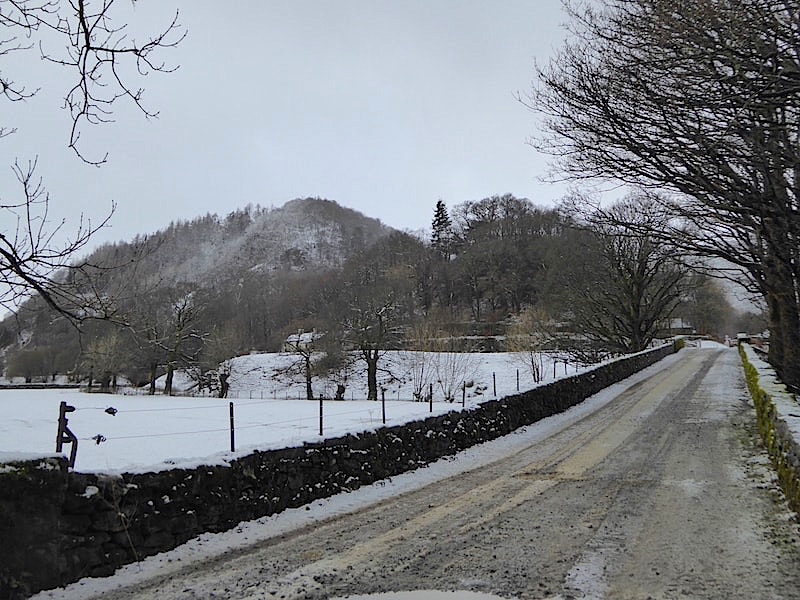 We weren’t surprised that there wasn’t another car parked in the United Utilities car park at Legburthwaite, its not a great morning to be out and about. Its overcast, damp and clammy and the snow is soft, slushy and beginning to melt. Ahead of us, as we walk along the lane from the car park, is Great How over on the left of the shot. At the end of the lane we will cross the A591 and continue straight ahead on the lane immediately opposite. 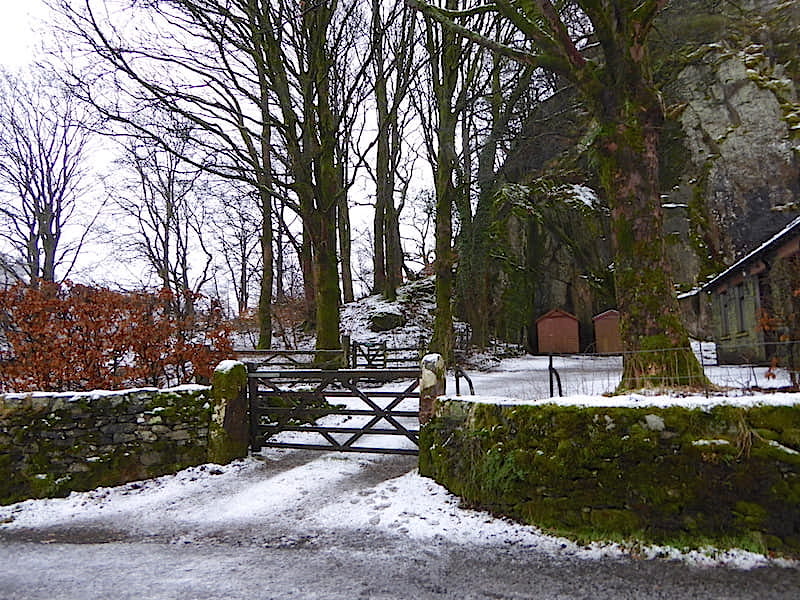 We walked just a few yards along that lane until we reached this set of gates. Just as we got here the first of many sleety rain showers began to split-splat heavily onto our jackets so we stopped to put on the waterproofs. Then it was through the first gate and across to the smaller handgate which gives entry to the permissive path below Great How. 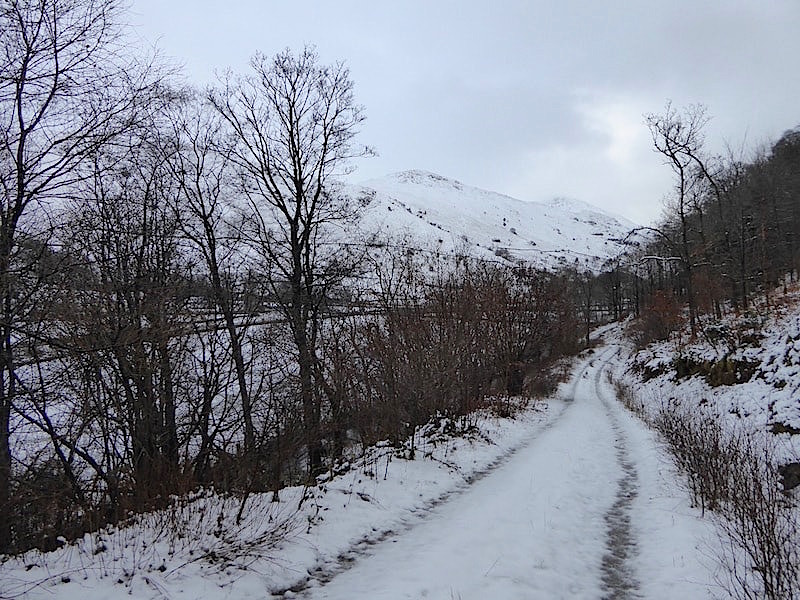 The narrow path between the gates and this point was wearisome to say the least. Gone was the hard frozen ground of recent days and in its place was soft muddy earth beneath a good few inches of wet and slushy snow. It was difficult to judge what you were putting your feet on, and whether it would hold beneath you when you did, so quite a bit of slip-sliding around ensued, as did a whole load of cursing. It was tedious and laborious and the forest track was more than welcome when it eventually appeared. Progress improved along here as we tramped along with a view of Browncove Crags in the distance. 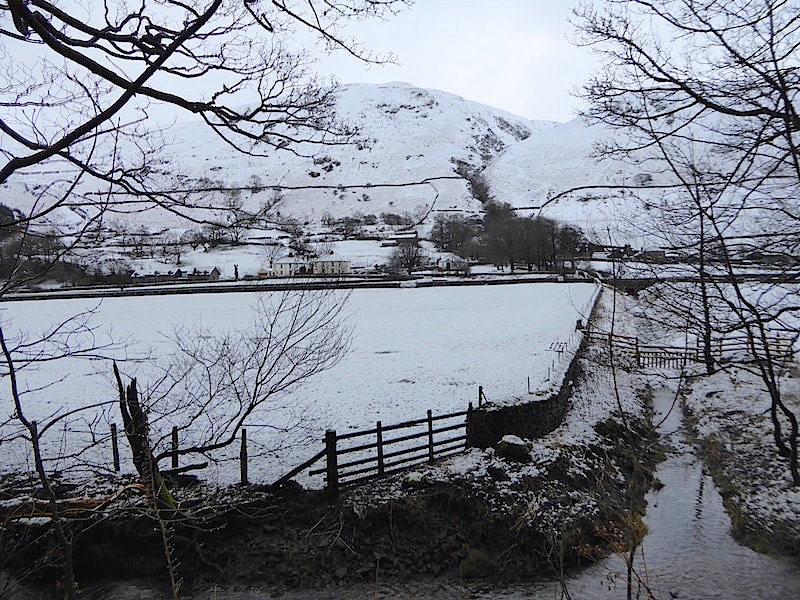 Difficult to distinguish in the snowy surroundings but in the middle foreground is the little hamlet of Stanah with Stanah Gill, above the trees to the right of it. How Beck gurgles along below us. 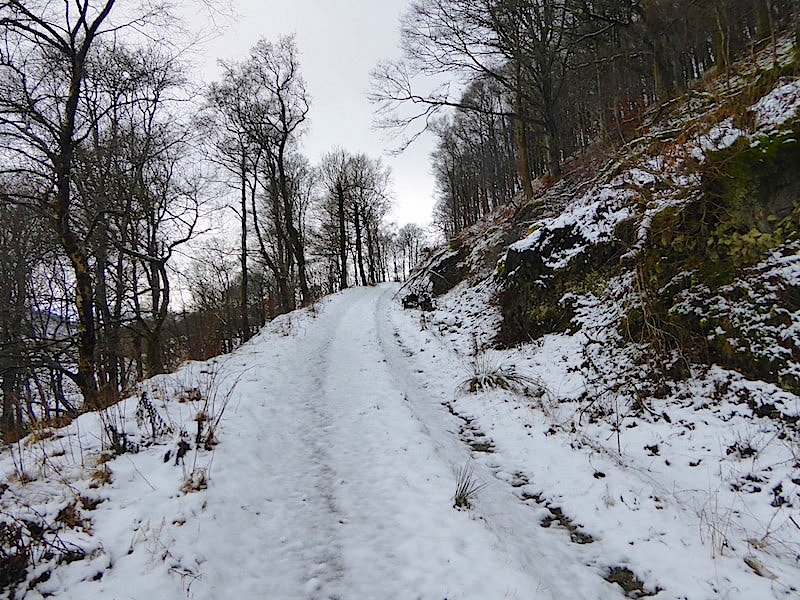 The forest track starts to rise from the valley bottom and begins to curve around Great Howe ….. 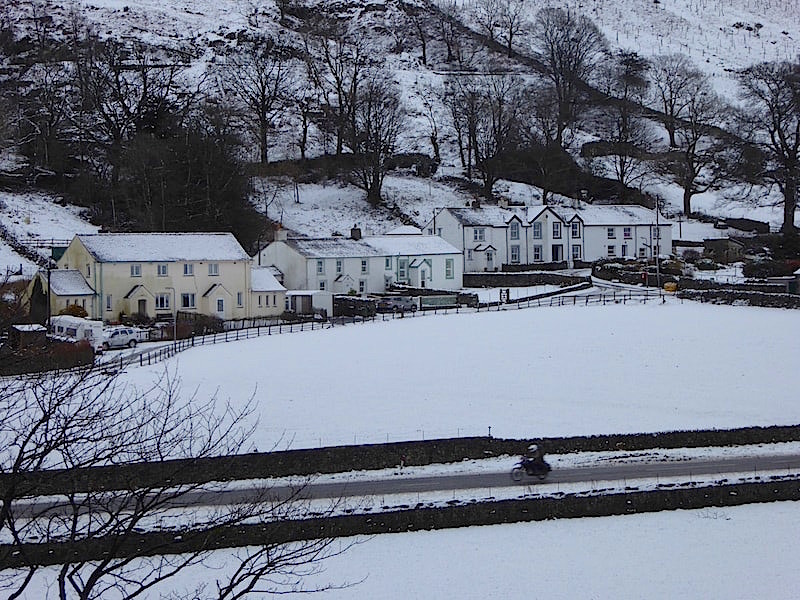 ….. and from the top of the curve a close up view of Fisher Place across the A591. A motor cyclist braves the slushy road conditions, rather him than me I thought. 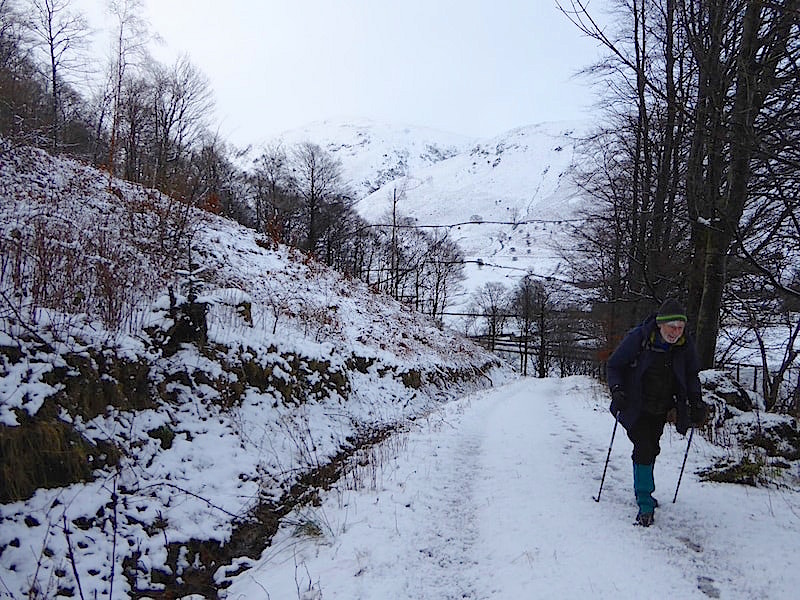 From the bend the track continues to rise and the spikes were a big help in maintaining grip on the melting snow. The bitter chill of recent days has gone, the air is much milder and a whole lot damper and the snow dropping from the branches above us hits our jackets with fat, wet splats. It had stopped raining by now and we endured sauna like conditions in the waterproof jackets while walking up here but we kept them on until we were clear of the trees. 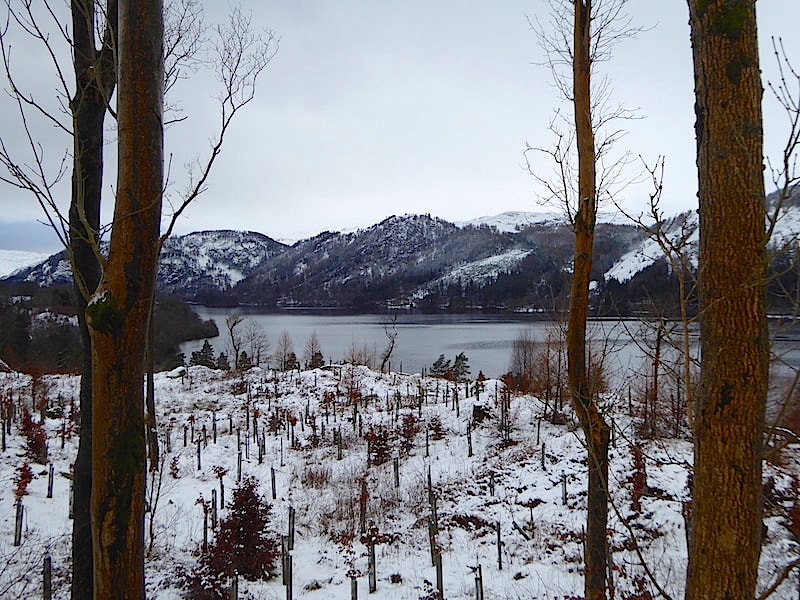 We reach the crest of the rise and have a view of Fisher Crag across Thirlmere. A little way out of shot to the right is a path leading up to the top of Great How but we didn’t go up to the summit today. 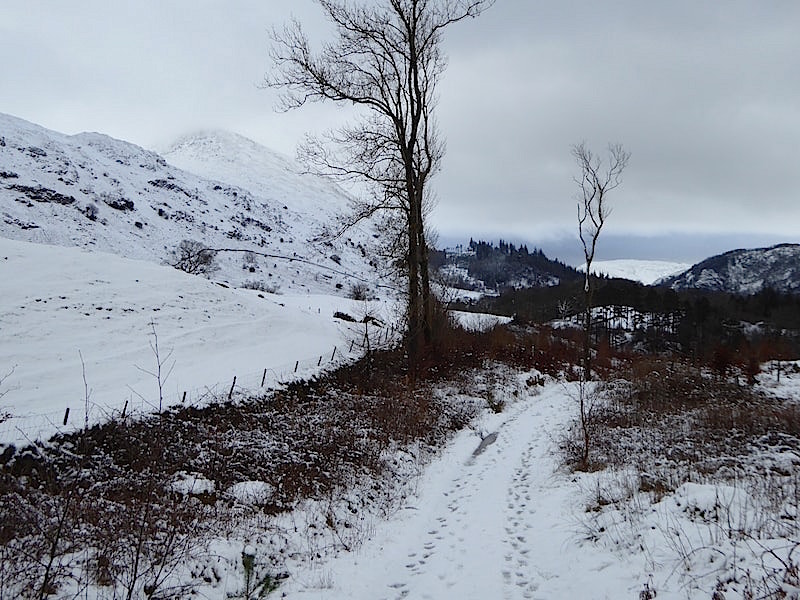 Browncove Crags, on the left, as we follow the track which is leading us down towards Thirlmere. Plenty of foot and paw prints in the snow so quite a few people and their dogs have been along here this morning. 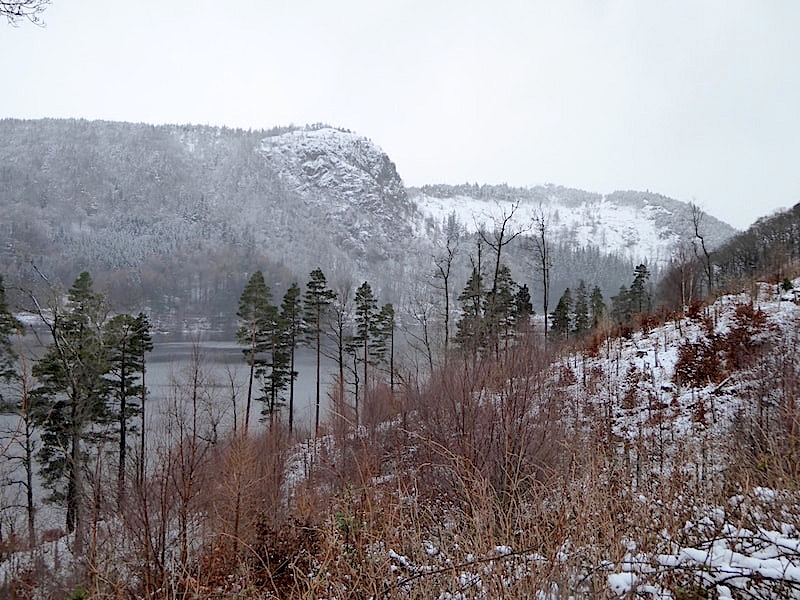 A look over my shoulder at Raven Crag across Thirlmere as we drop down towards the shore. 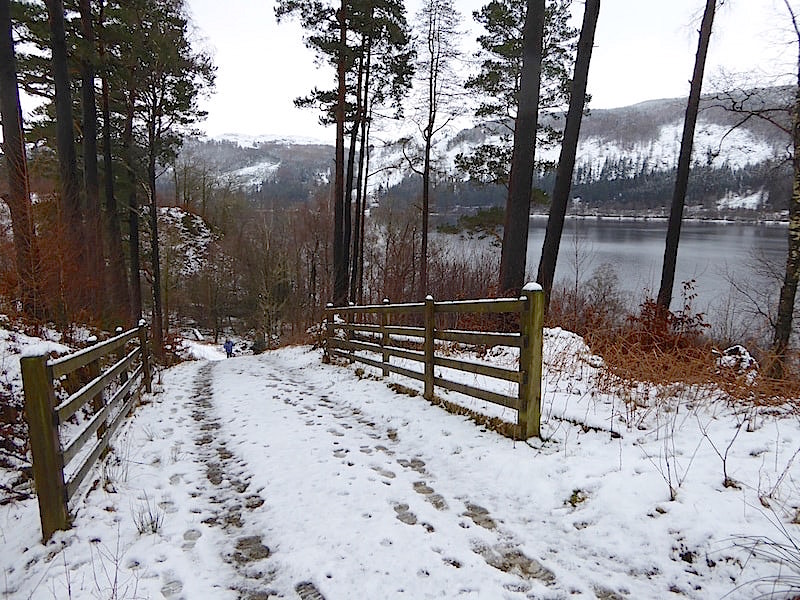 Coming towards us along the track is one of a pair of walkers. When we met up with both of them we had a longish chat, they were either from the USA or Canada, most probably the latter I think although I didn’t ask. They were planning on calling in at The King’s Head for a coffee on their way back and asked us what the pub was like but as we have never been inside it we were unable to enlighten them, other than to say it always seems to be well frequented so it couldn’t be too bad. A very nice couple and the first, and only, walkers we met today. 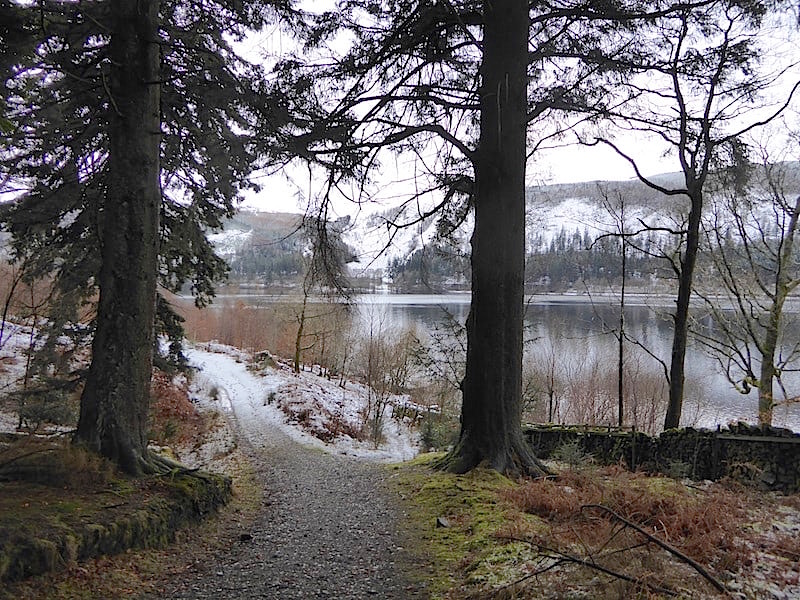 At the junction just below us the forest track continues on over to the left while the smaller track, on the right, leads down to the shoreline. We followed the shoreline path but by the time we reached the end of it, as it rejoined the forest track, we wished we hadn’t bothered. It was very much like the one at the beginning of our walk, narrow, wet, muddy and boggy with bushes and brambles overhanging it all along its length. 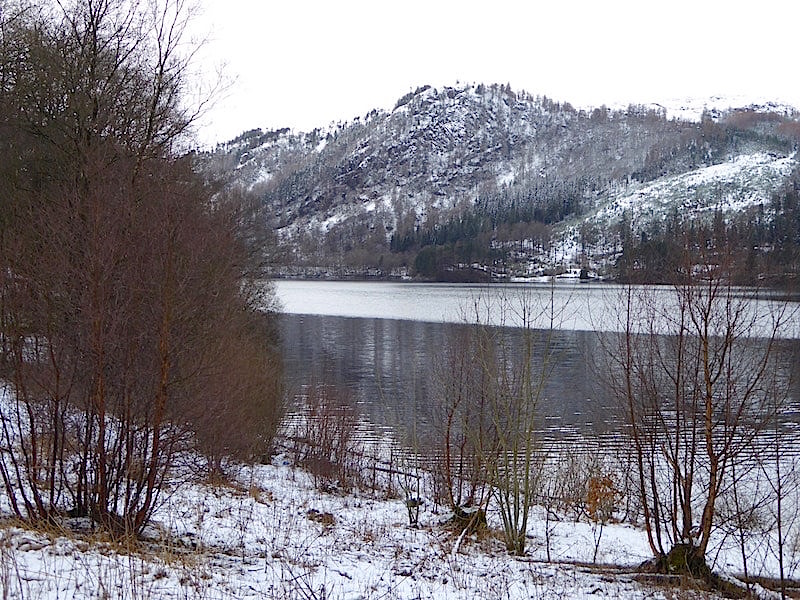 Fisher Crag across Thirlmere as we approach the end of the forest track and turn up alongside ….. 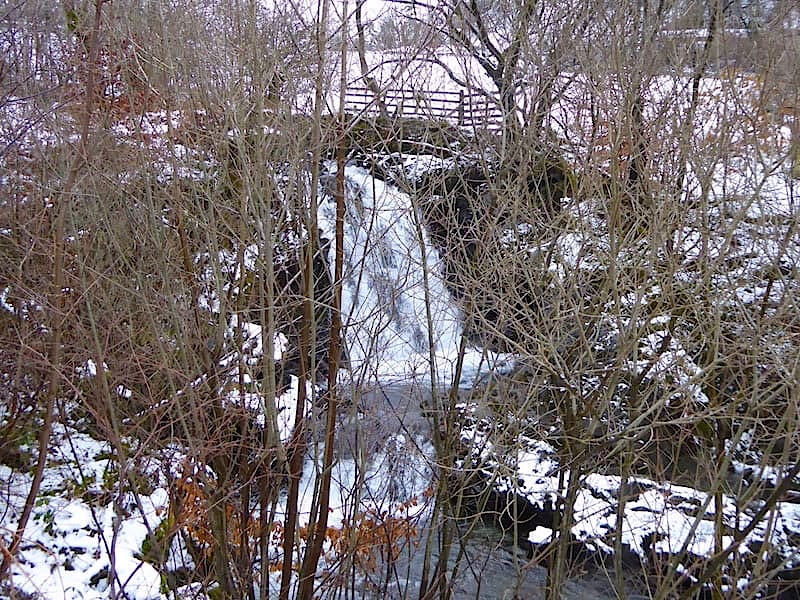 ….. Helvellyn Gill, where gallons and gallons of melt water were dropping down into Thirlmere. 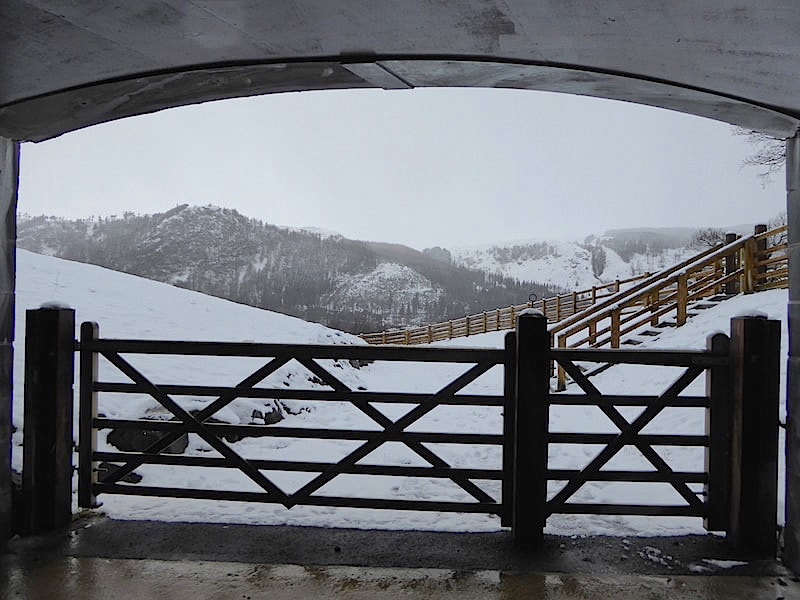 By now it was raining heavily again so we took shelter in the underpass below the A591, got out the hot coffee and took a short break. 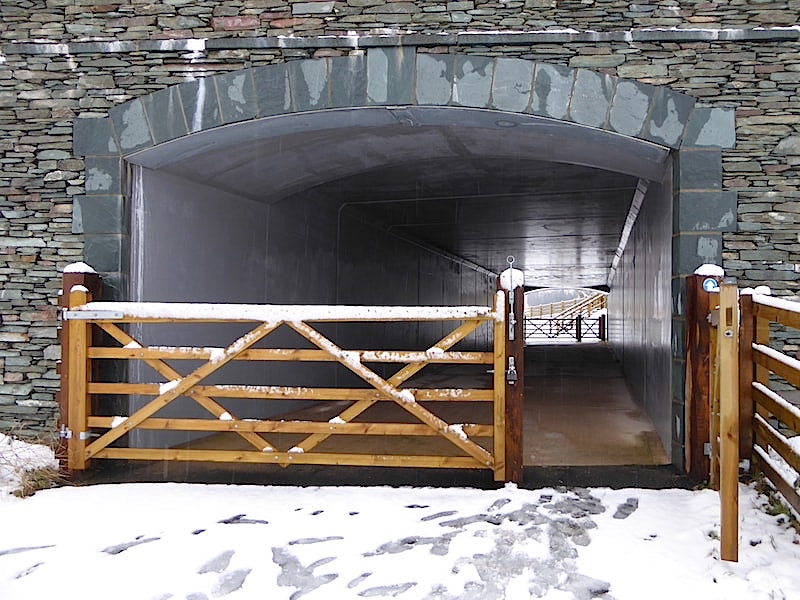 Refreshed and ready to go again we emerge from the underpass and follow the snow covered path to Swirls car park. 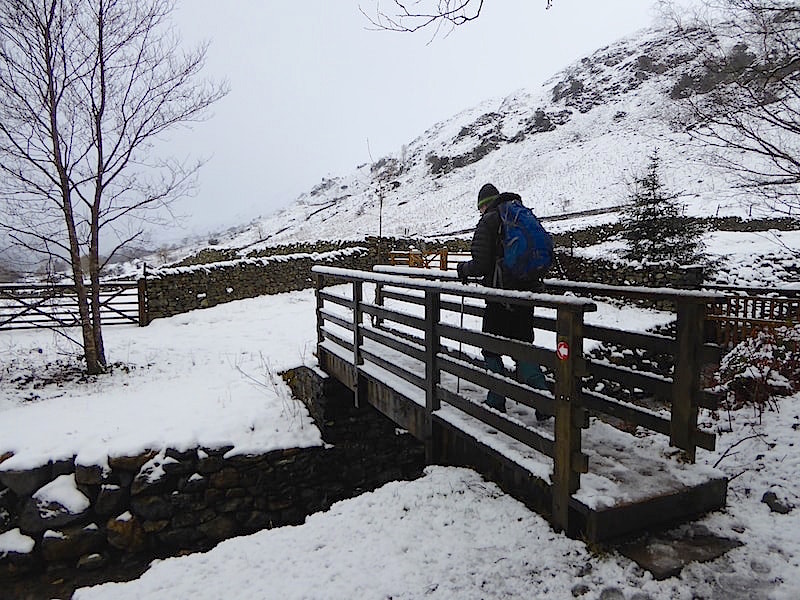 From the car park we cross Helvellyn Gill and follow the initial stages of the path up to Helvellyn. 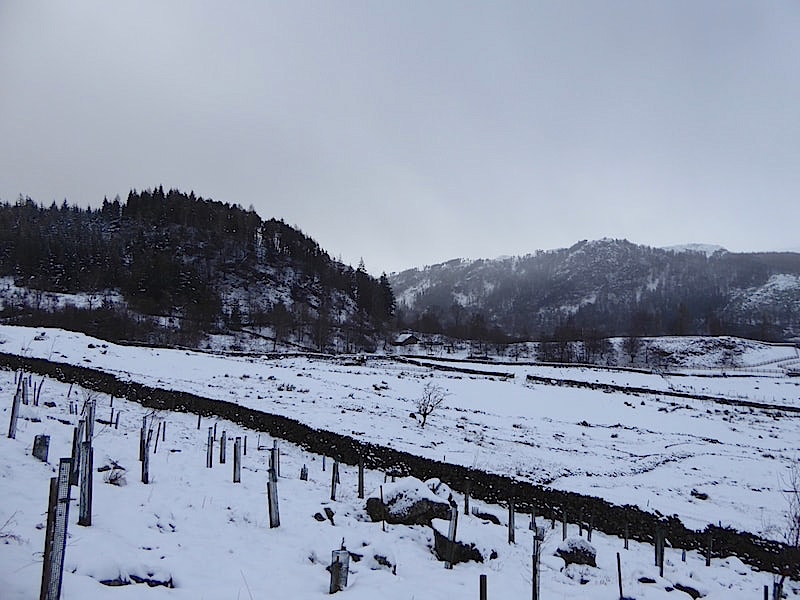 We leave the Helvellyn path and branch off to the left of it to take the scenic route along the slopes below Brown How. For the moment the rain has stopped but as I take a look back at Highpark Wood and Fisher Crag I notice that the sky is darkening so the waterproofs may have to come out again. 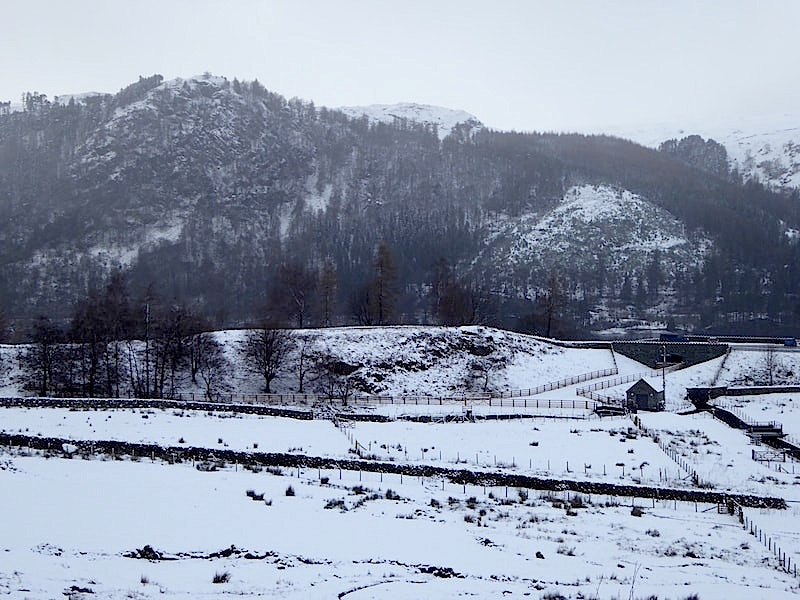 Fisher Crag on the left and over to the centre right you might be able to pick out the underpass, carrying the A591 above it, which we walked through a little earlier. 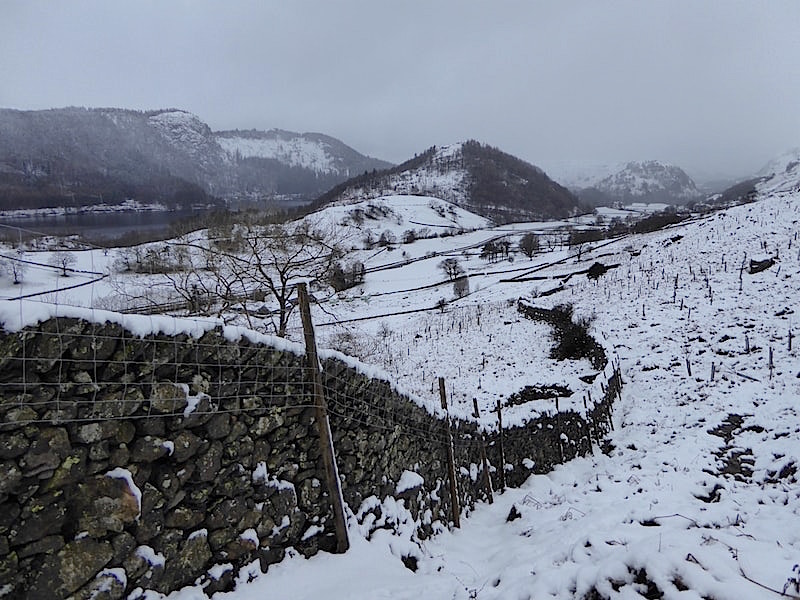 Looking ahead at our route above the wall through the deep snow over the rough terrain. There is a path but its hidden beneath the snow and difficult to navigate, there’s more slipping and sliding as the snow slides away under our feet, and the rocks and stones hidden under mounds of snow are just waiting for you to unwittingly step on them. Slow progress once again. 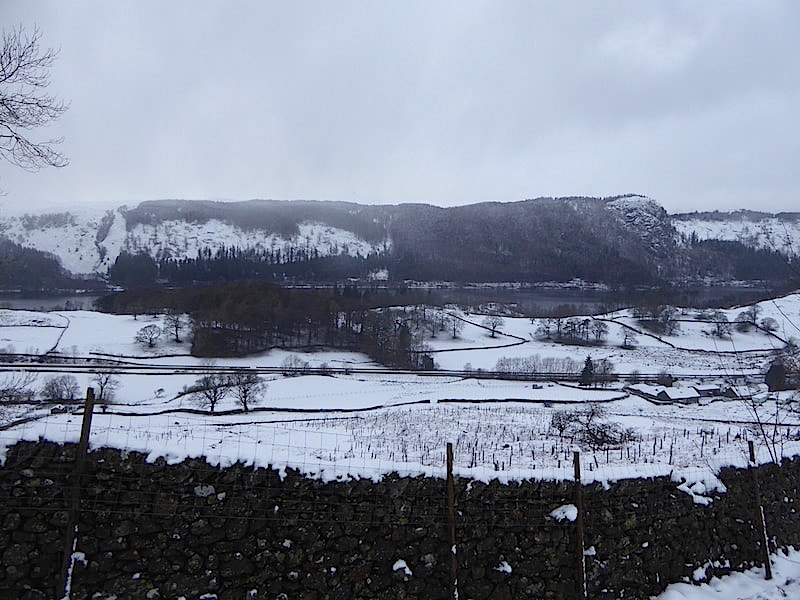 A tiny glimpse of Thirlmere across the middle of the shot with Raven Crag, on the right, rising above it. 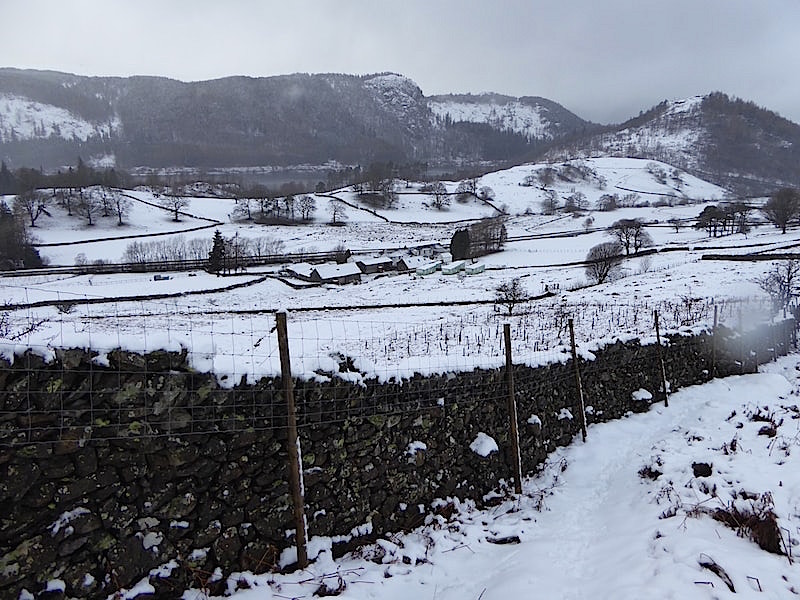 Its raining heavily again, hence the water blob over to the centre right. The sky is getting darker ahead of us and when Thirlspot Farm appears in the centre of the shot we decide to leave the scenic route for a better day and head down to the road and hotfoot it back to the car. 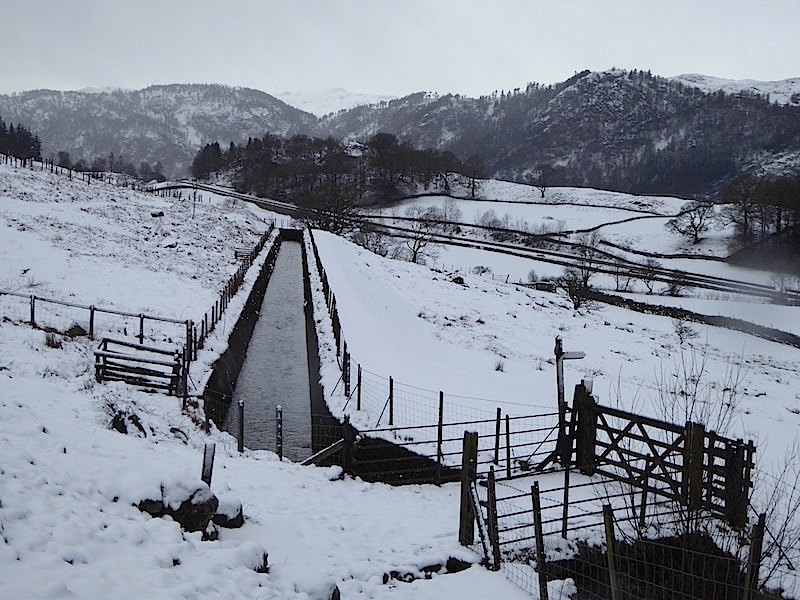 Close by the gate leading down to Thirlspot is part of the Thirlmere Aqueduct which carries water from Thirlmere down to Manchester. 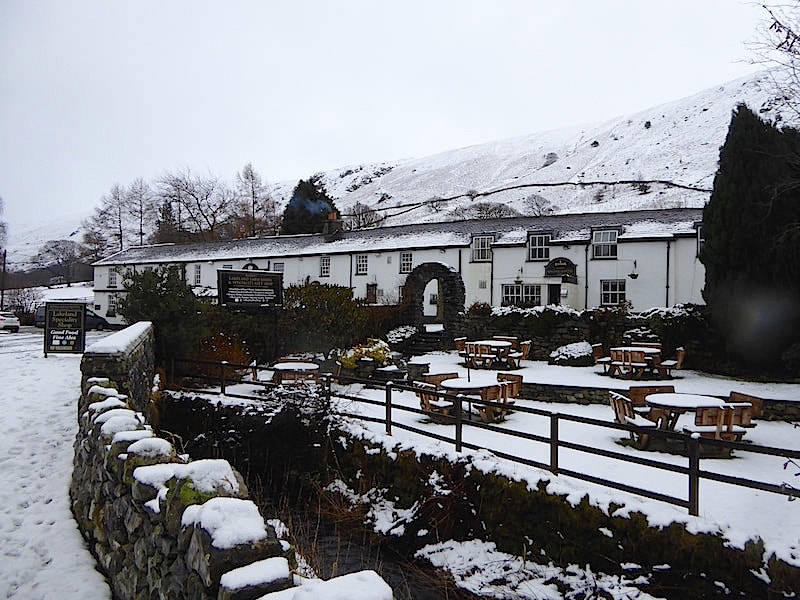 Close to the farm is The King’s Head Inn, the one which the two walkers we met were asking us about. Its not well frequented today, at least not in the garden, there’s not a lunchtime diner to be seen. Its now raining very heavily so we press on ….. 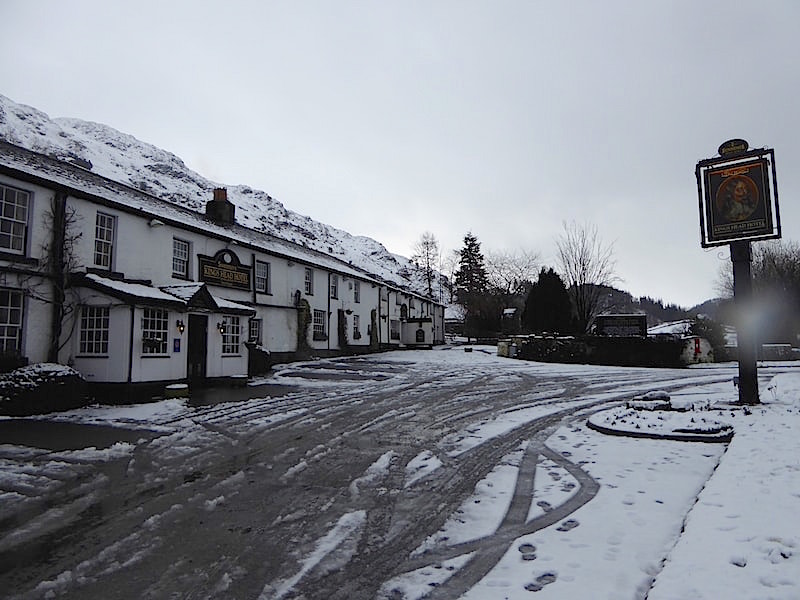 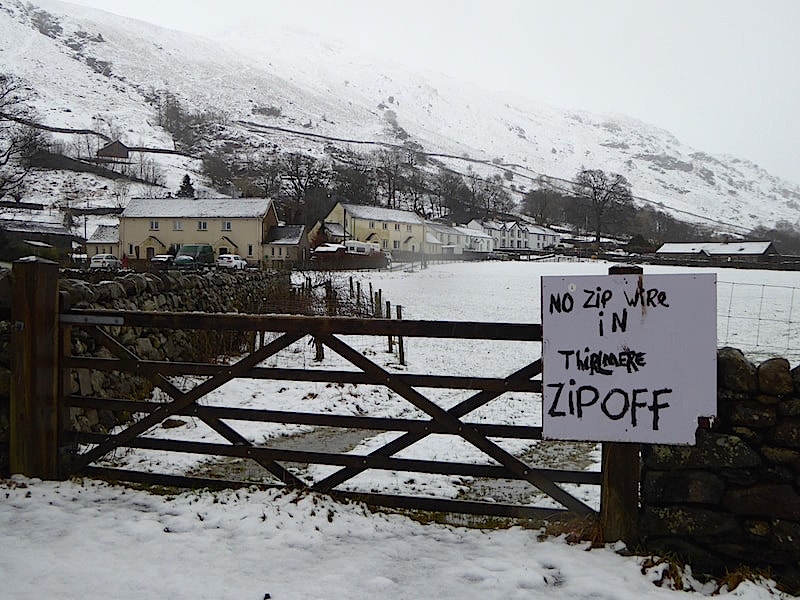 Passing by Fisher Place where there’s no support for the proposed zip wire. 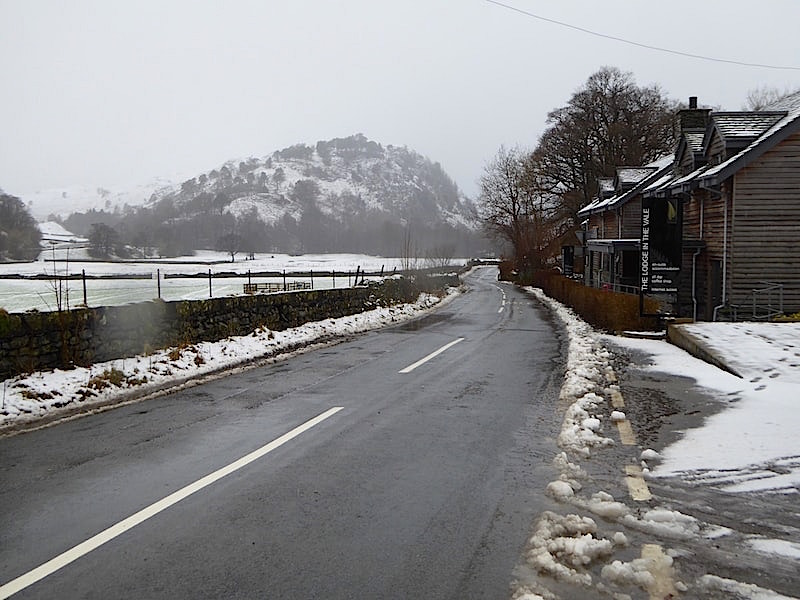 Back at Stanah and The Lodge in the Vale. From here its just a short walk along the road back to the car park at Legburthwaite. Its still bucketing down, water is splashing off us in showery sprays with every step we take, and we can’t reach the car park quickly enough. Ah well, we’ve had some fresh air and exercise which, after all, is what we came out for. Better weather would simply have been a bonus. In case you’re wondering, that piriformis muscle gave me absolutely no trouble whatsoever today, and for me that’s an even bigger bonus. It looks as though all those tedious stretching exercises have been worthwhile.