A short walk this afternoon in very dull and overcast conditions, conditions which have been prevalent since our last outing. The fells have been shrouded in very low cloud and we’ve had a distinct lack of sunshine. Not the sort of weather which makes it worth while to go out onto the fells taking photographs, especially when the light is so poor. Anyway, here are a few shots from our walk along Borrowdale Beck and although the route map appears to show that we were actually walking in the beck for a good deal of the way I can assure you that we weren’t, we’re not that keen on having wet feet. Either the mapping of the beck is wrong or over time the course of it has changed. More than likely its the latter given the episodes of flooding it has been subjected to and the widespread erosion of both banks over the years. 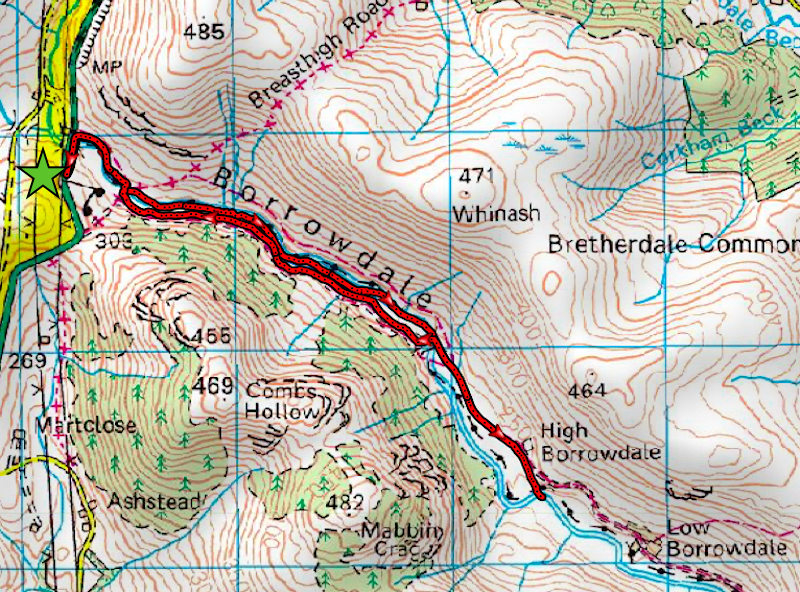 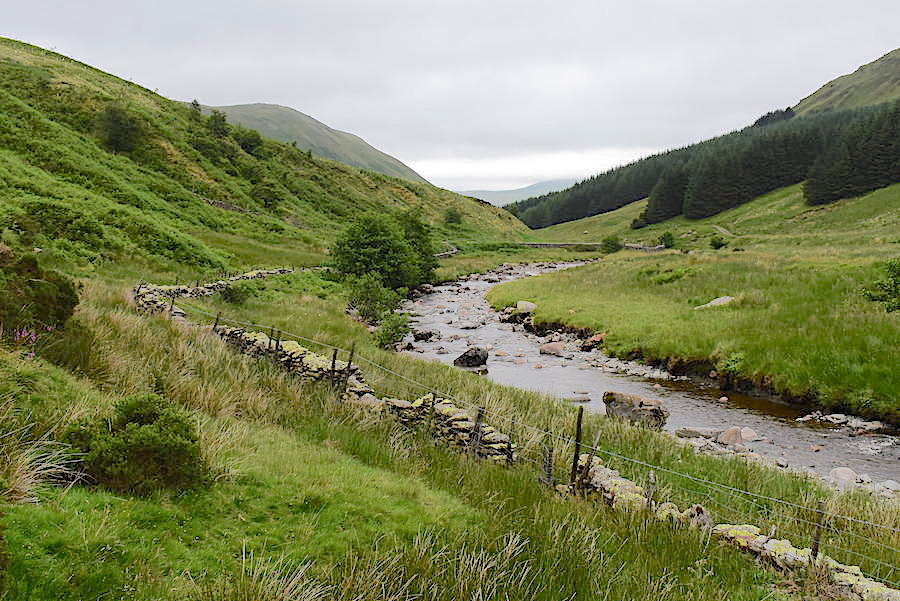 View along Borrowdale. We walked close to the beck on its northern bank. The wall and the fence above it continue all the way along to the footbridge so there was no possibility of us walking in the beck, even if we had wanted to. There isn’t an established path along this bank so its quite rough underfoot but there are plenty of sheep trods along the way which provide sections of rather easier walking. 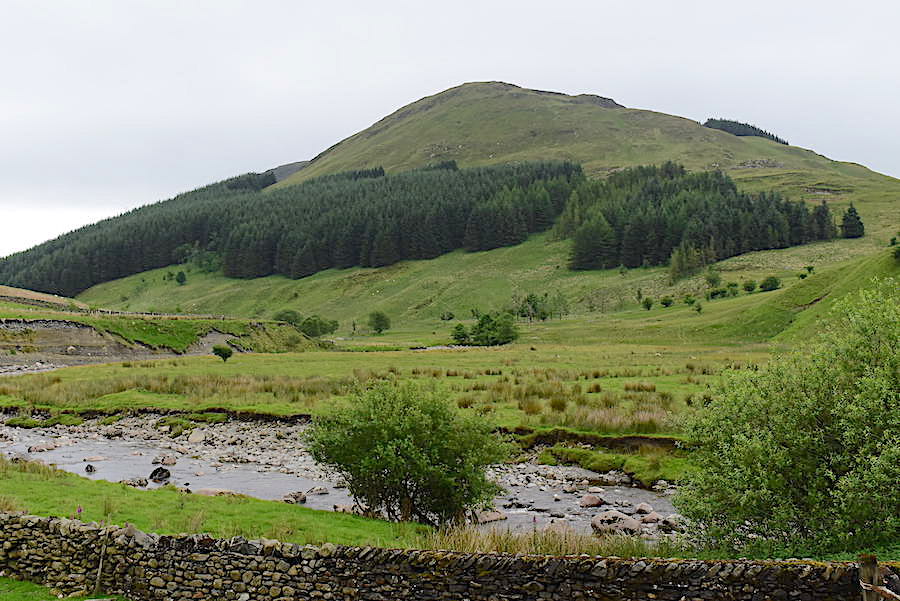 Over on our right is Ashstead Fell, a steep climb but not a very long one. 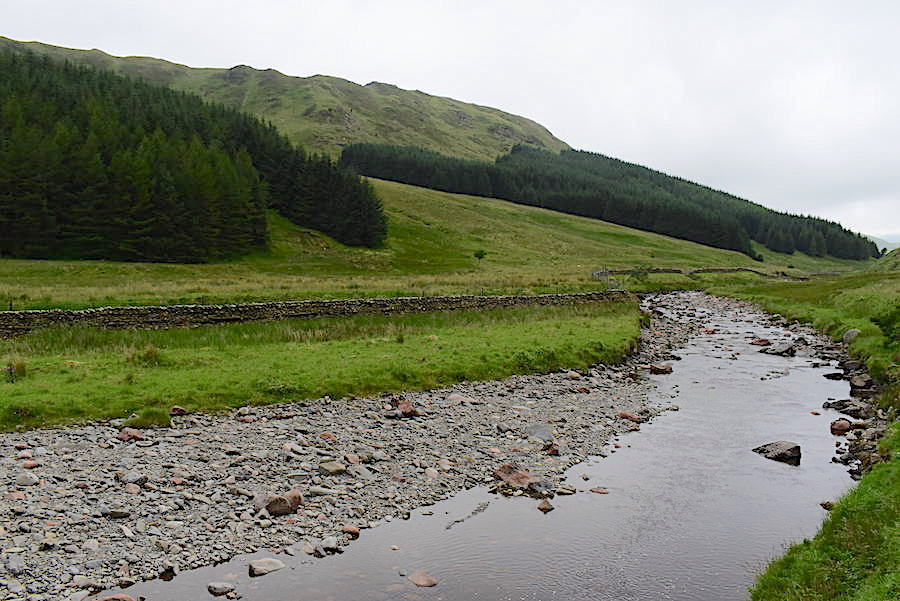 From the beck a look back towards Ashstead Fell. 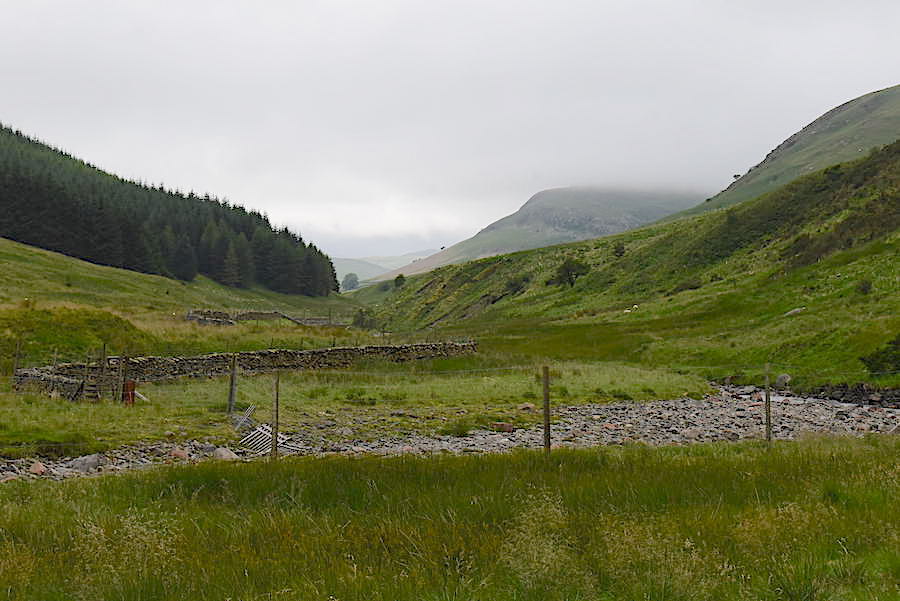 A little further along and another look back as I noticed that even the lowly top of High House Bank, at 1624′, has low cloud drifting across it. 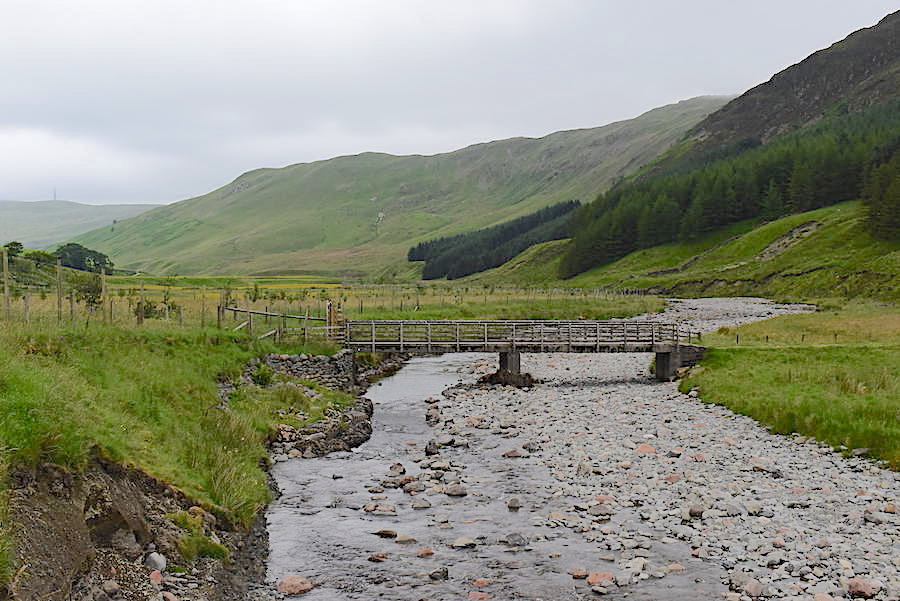 Approaching the footbridge with the slopes of Whinfell Beacon across the skyline. 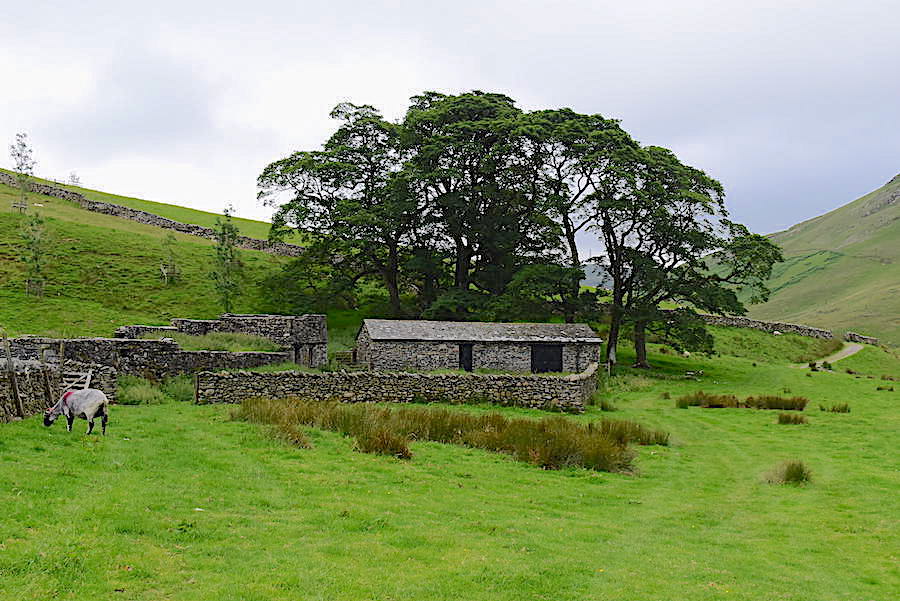 From the footbridge we join the established path through the valley and make our way through the meadows over to what remains of High Borrowdale farm. 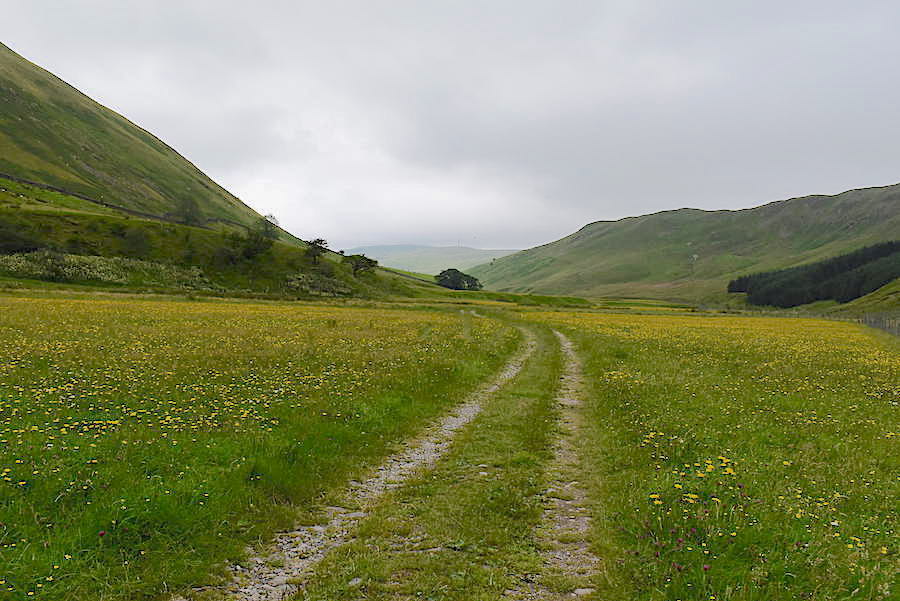 We continued on a short distance from the farm for another view south along the valley. Hidden amongst the little stand of trees in the centre of the shot are the buildings of Low Borrowdale farm which is still inhabited although I don’t think its a working farm now. 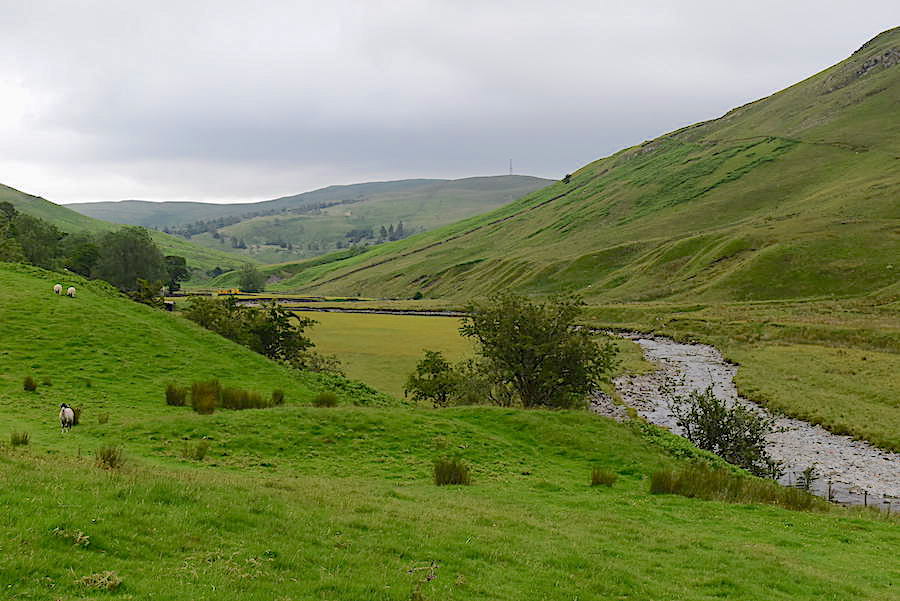 Heavy cloud looms over Grayrigg Common and its communication mast. 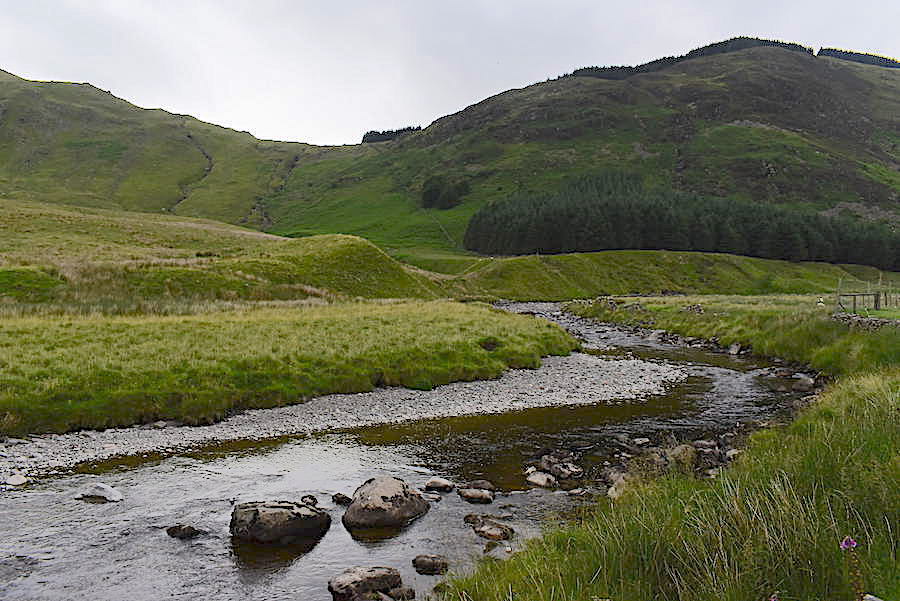 Whinfell Common on the left and Mabbin Crag on the right. 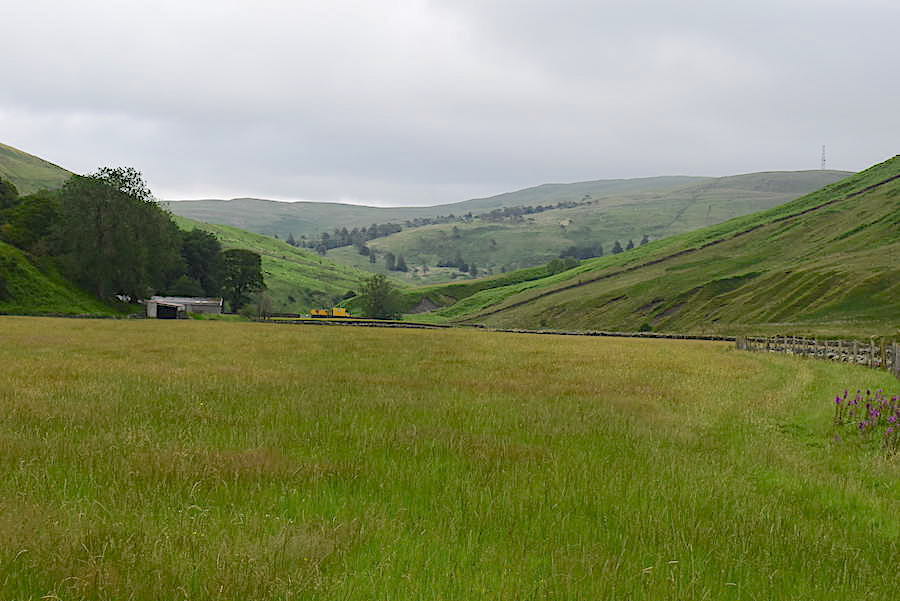 The buildings of Low Borrowdale farm come into view beyond the meadows and at this point we turn around and begin the walk back along the established path on the south side of the beck. 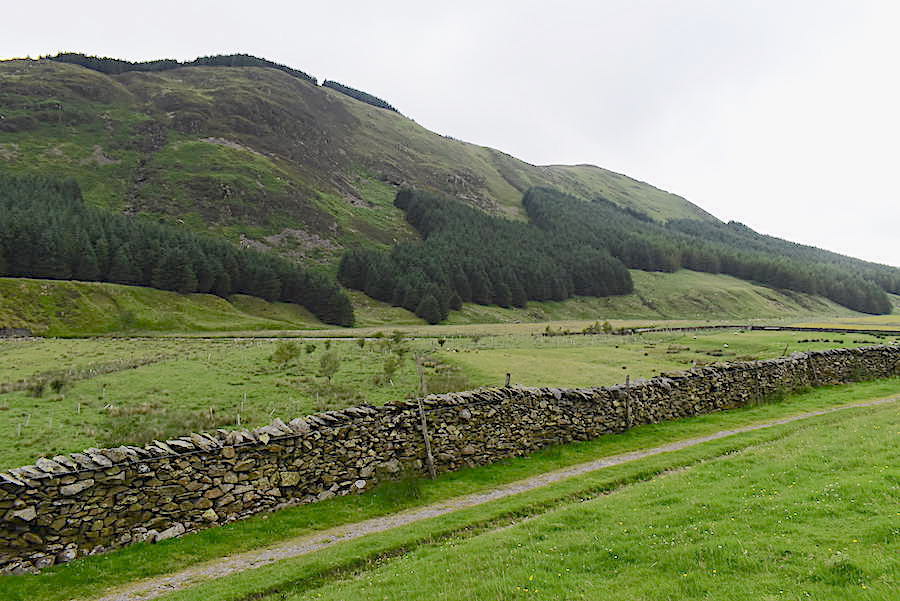 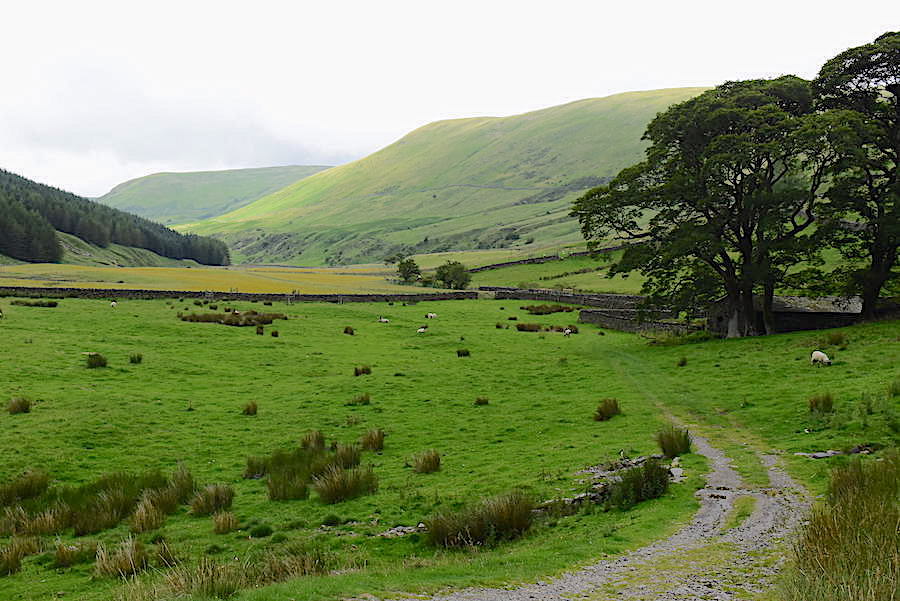 A glimmer of light lands on Whinash as we make our way back to HIgh Borrowdale farm ….. 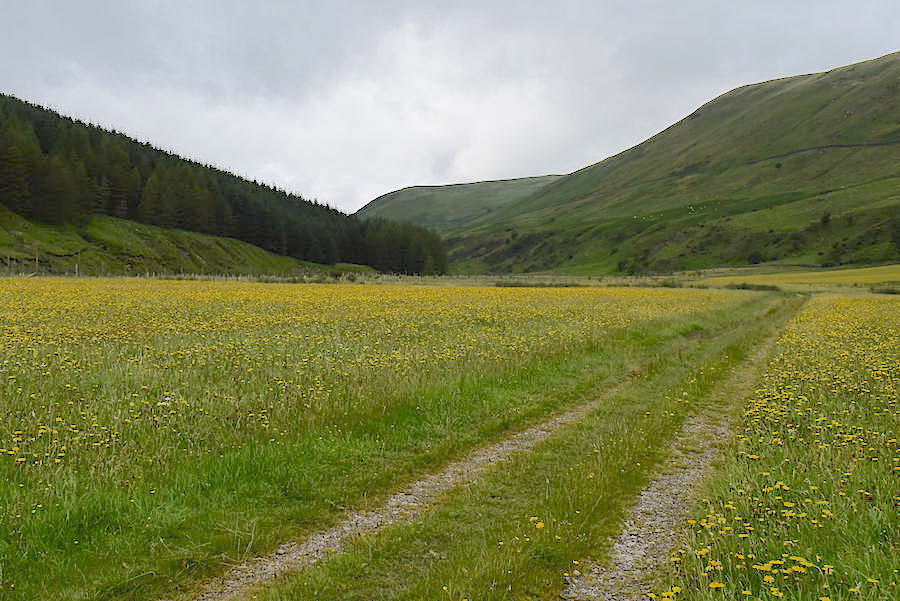 ….. but it was short-lived. The meadows had a sunny appearance though thanks to the buttercups and dandelions. These meadows are at their best in June so they largely ‘gone over’ and any gardeners among you will know what I mean by that. Still, they were very pleasant to walk through. 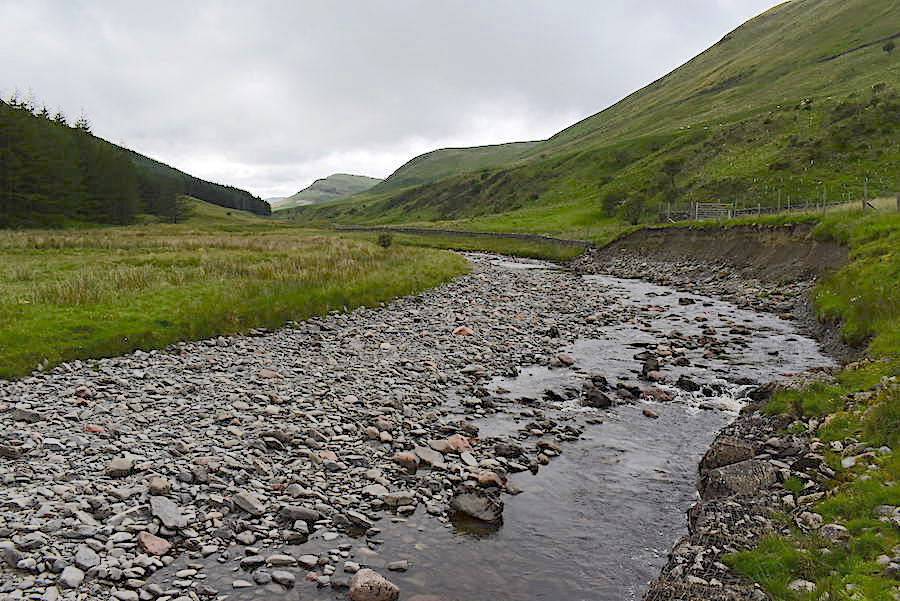 The view upstream from the footbridge where a little brightness is appearing over High House Bank and Greenside Crag on the centre skyline. 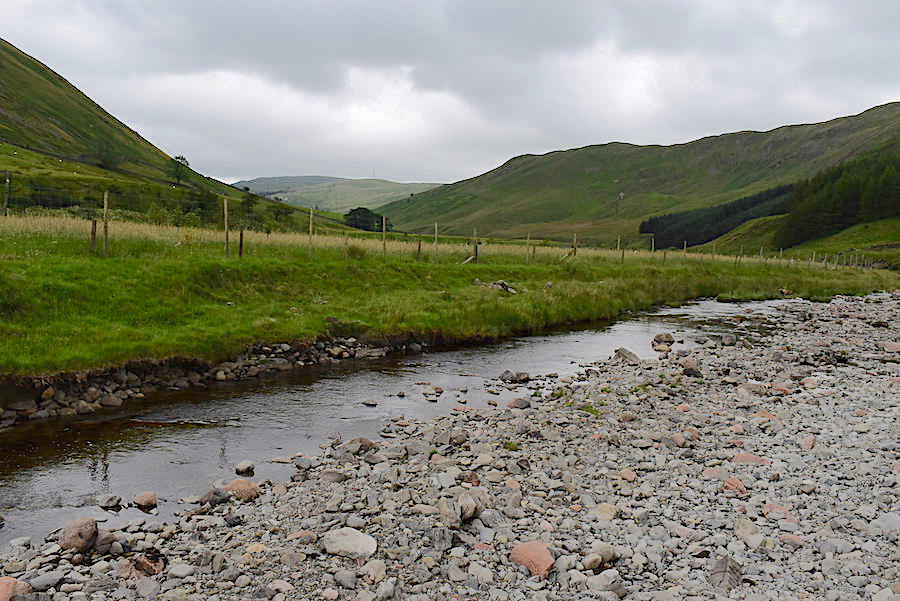 The view downstream from the footbridge. 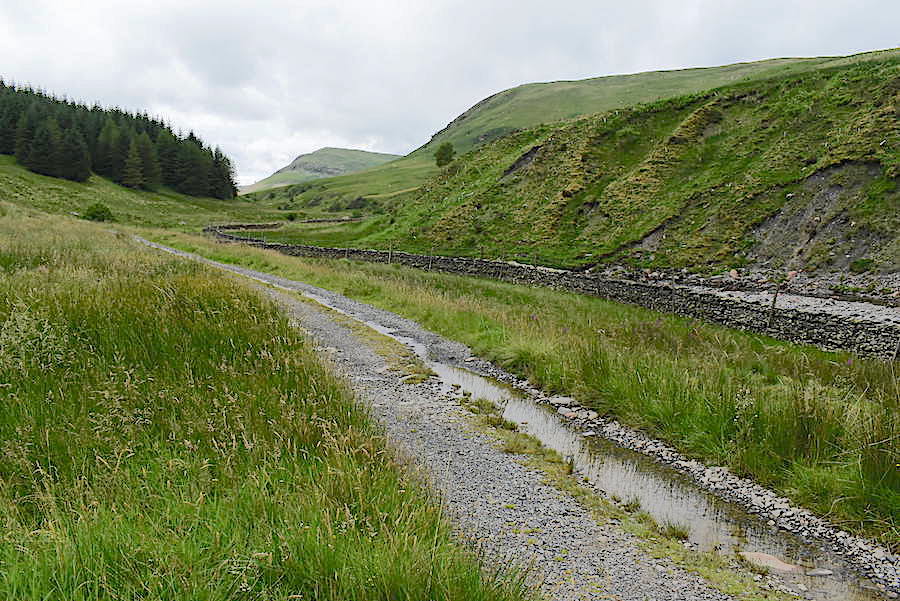 Lots of puddles on the established path. These were easily avoided, others had taken over the path completely, some of them several feet long and ankle deep. We didn’t walk in them either. 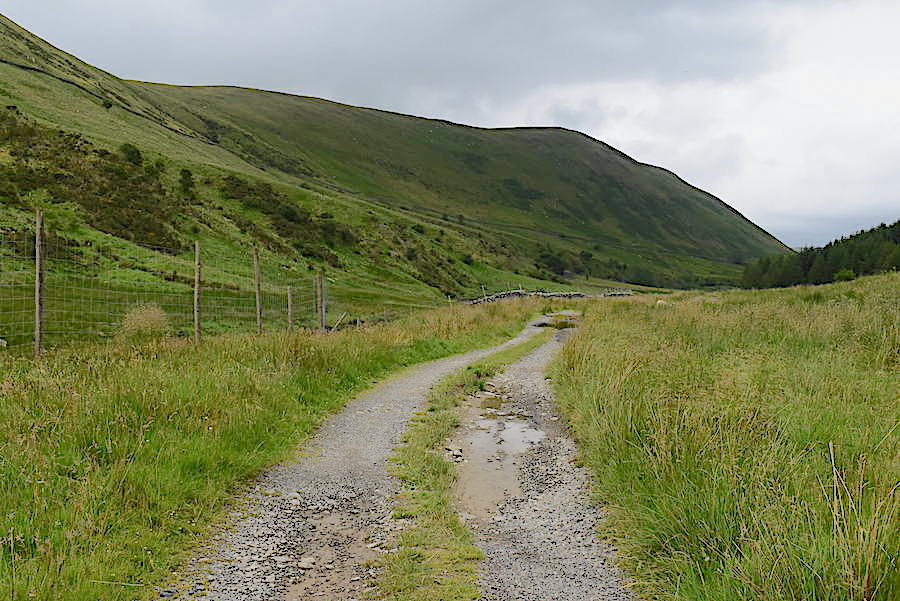 A look back to Winterscleugh Fell. 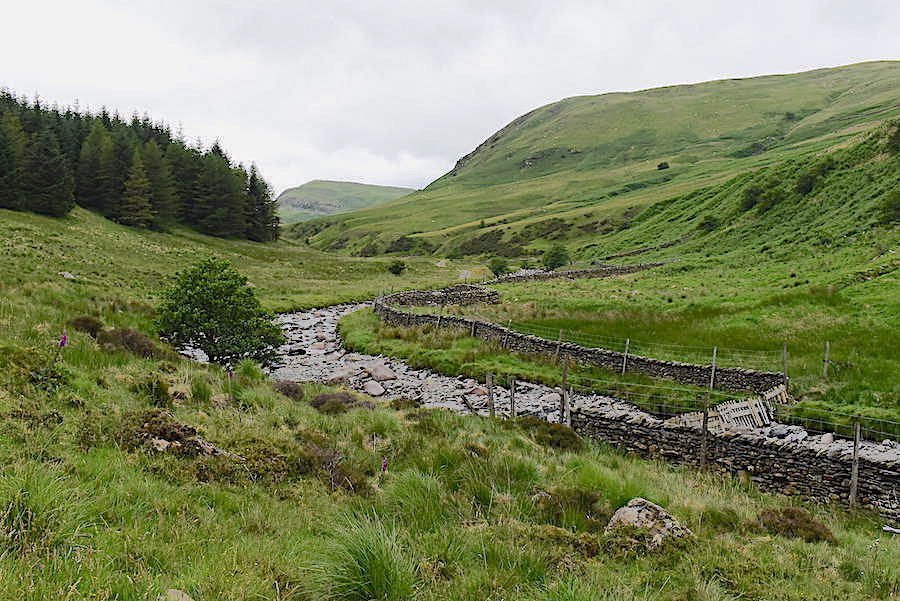 High House Bank in the distance with Greenside Crag over on the right. 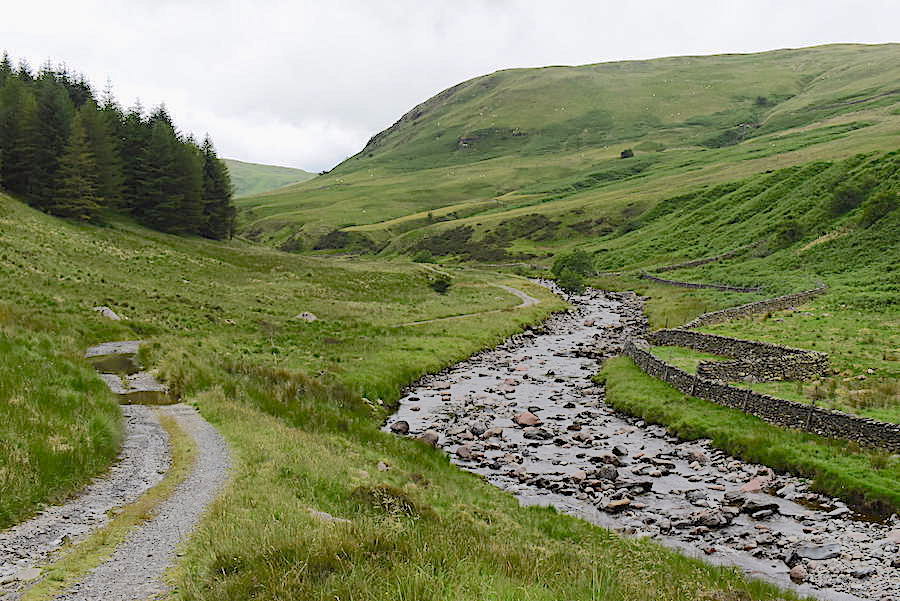 The path keeps close company with the beck and the music it creates is nice to have as you walk along. Very soothing. 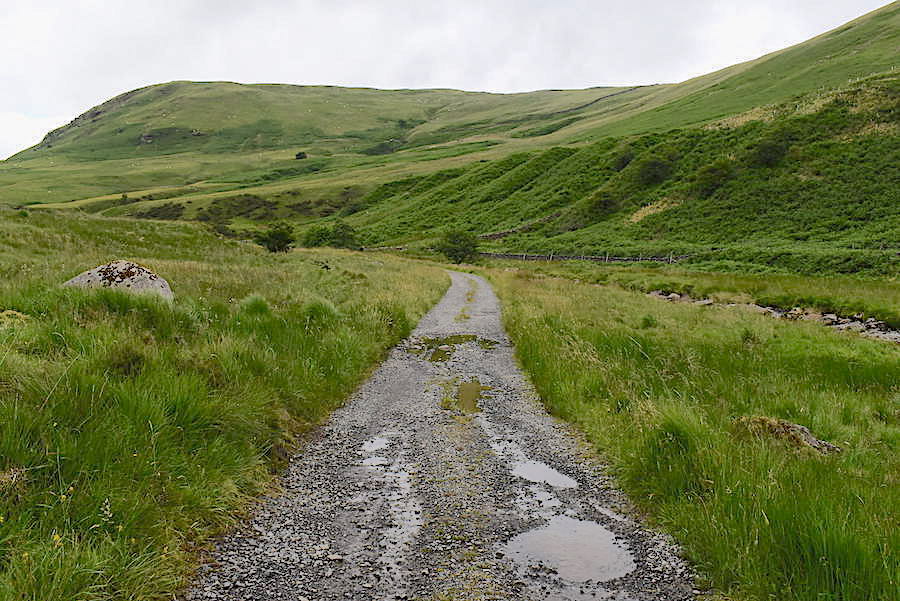 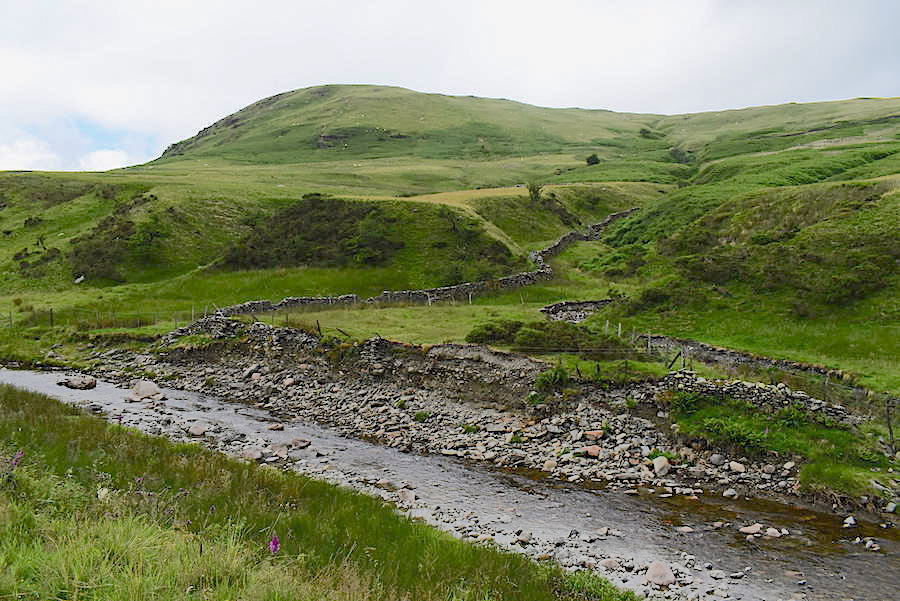 Some of the erosion along the banks which I mentioned to begin with. The bank we were walking on has been very deeply undercut in many places so those too will eventually give way. 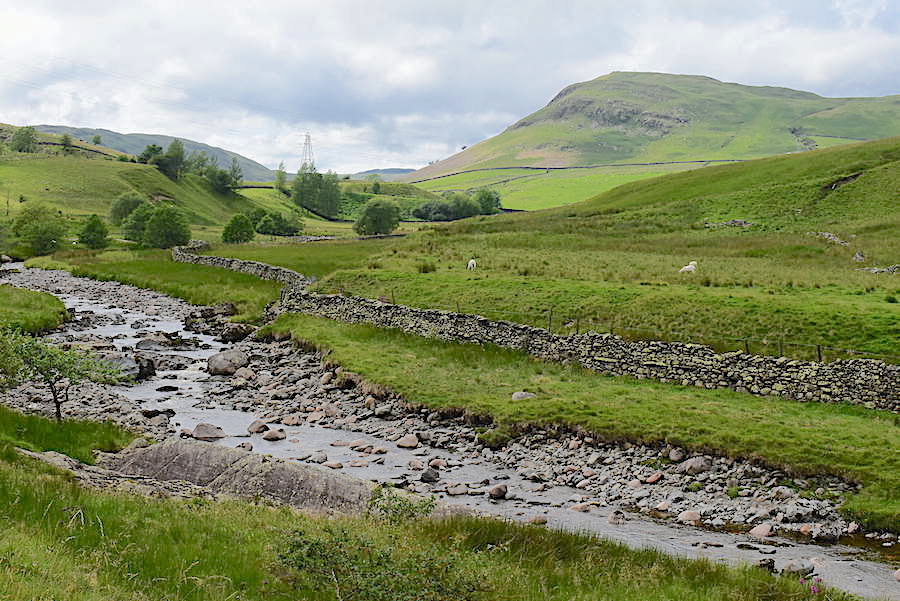 High House Bank gets a faint glimmer of sunlight through a gap in the cloud. 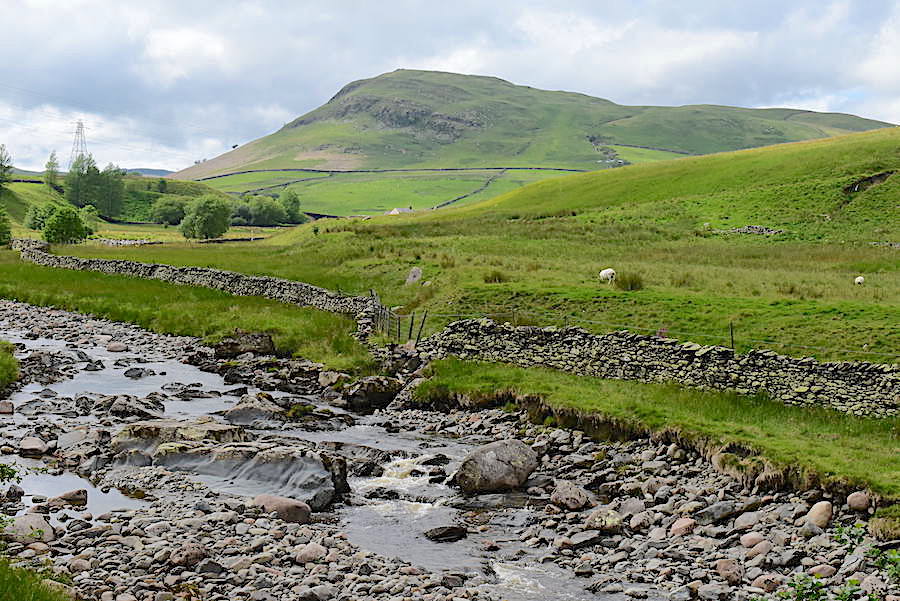 High House Bank again. The A6 is hidden between it and us. 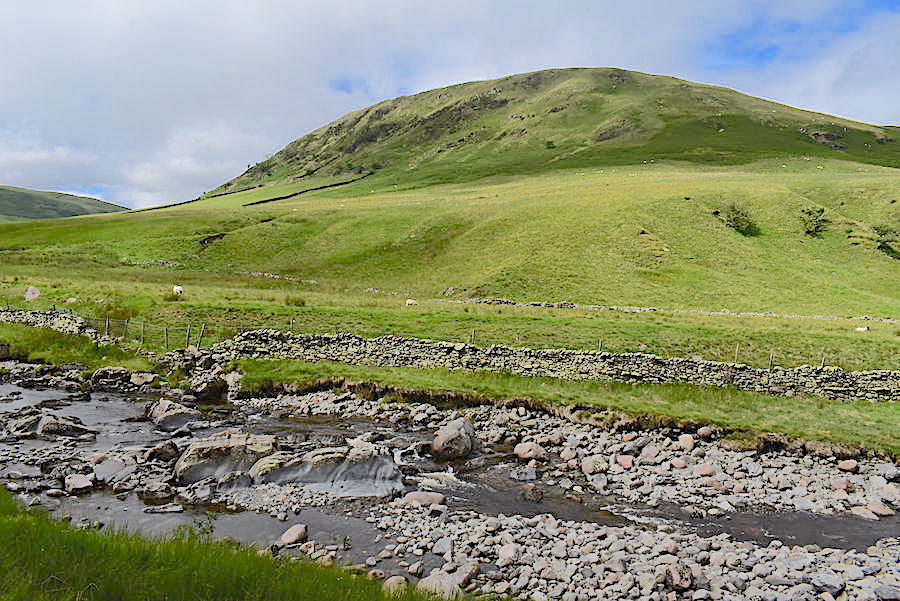 Greenside Crag also gets a glimmer, and we get to see some hints of blue sky above it ….. 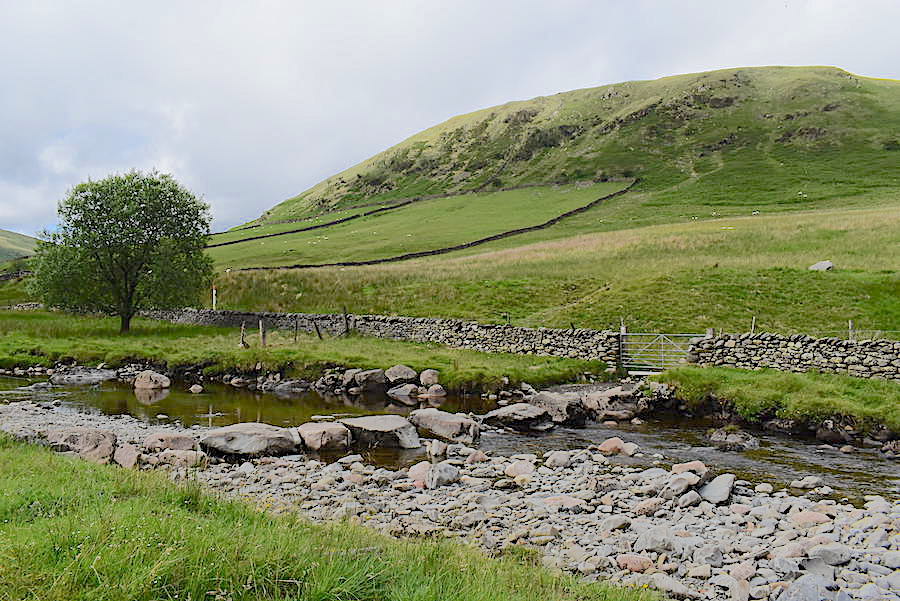 ….. but by the time we had reached the stepping stones the blue bits had gone somewhere else ….. 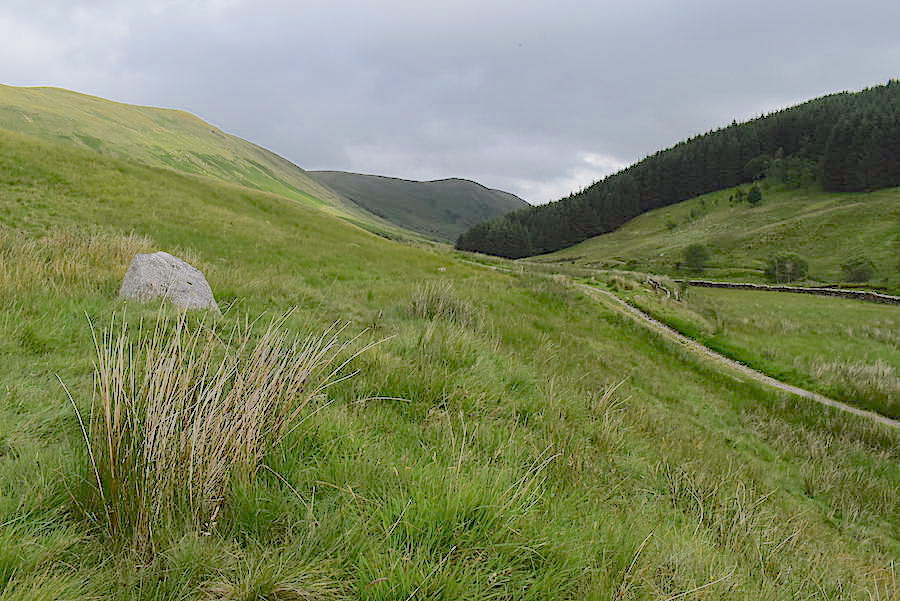 ….. although looking back along the valley after crossing the beck the blue bits hadn’t gone south. 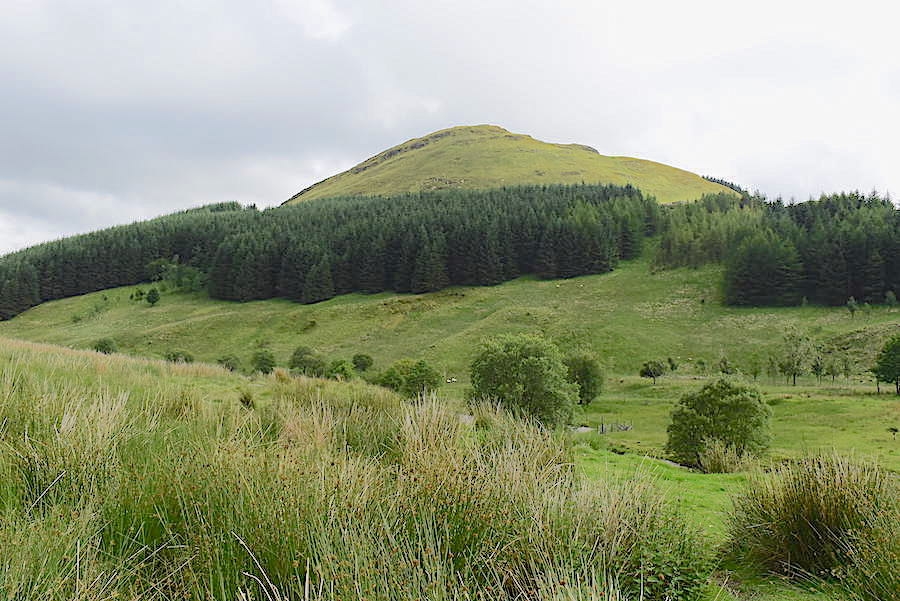 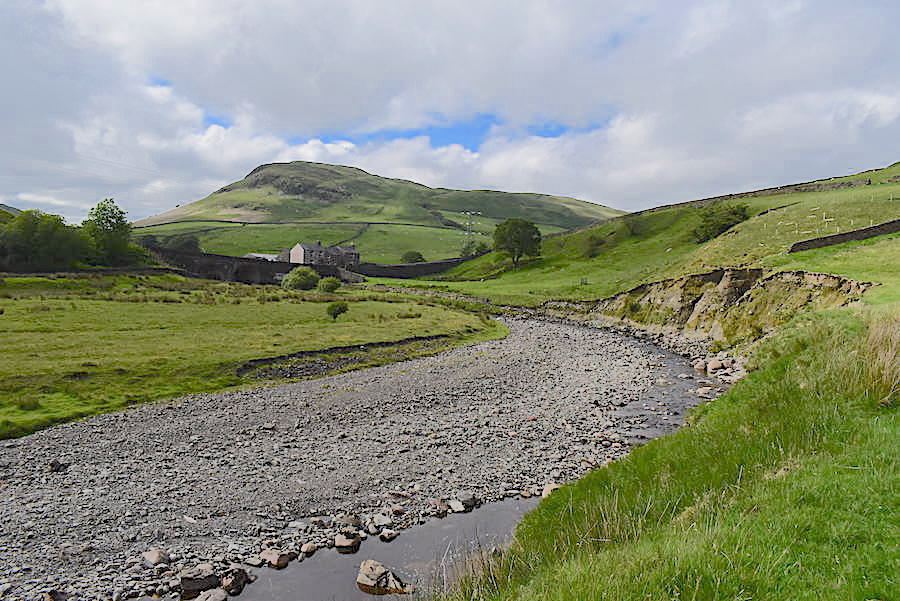 So that’s where the blue stuff went, on its way north west over High House Bank. Oh well, it was nice while it lasted. 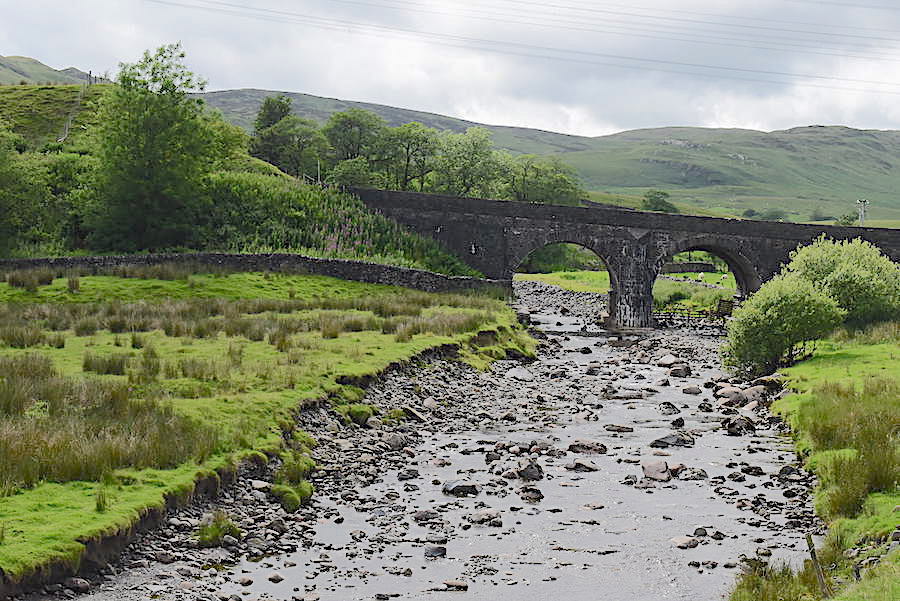 Hucks Bridge at the end of our walk. The path leads over to the right to a field gate and out onto the A6. Then there’s just a short walk back across the bridge and up the hill to the lay-by. So not a long walk today, or a very bright one, but  as ever it is always enjoyable to get outdoors for a couple of hours and leave the world behind.