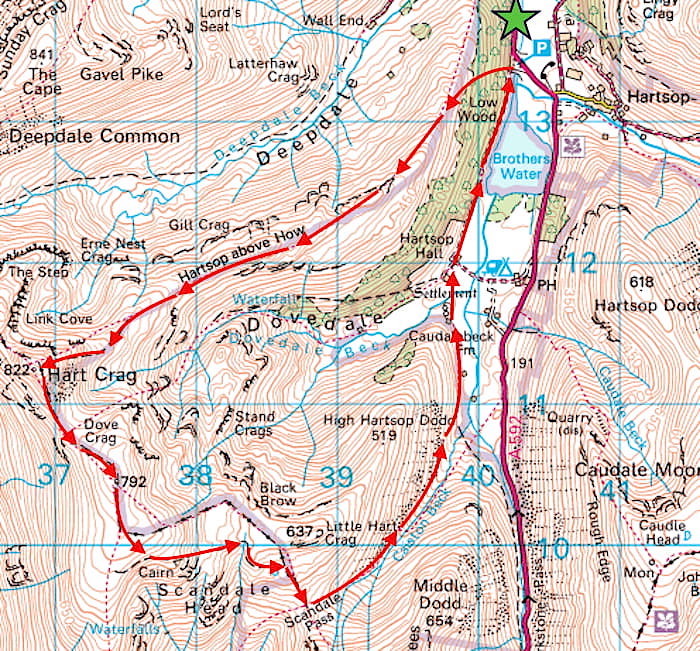 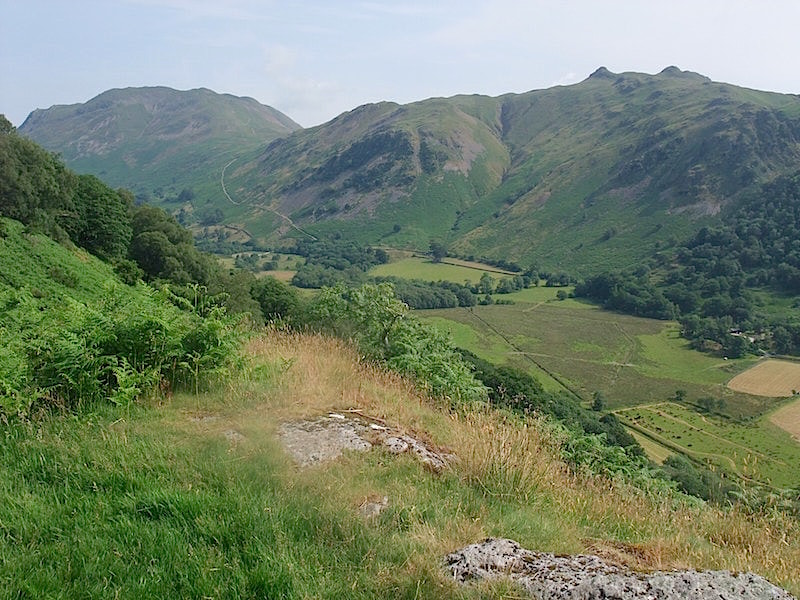 We walked through the gate at the end of the car park at Cow Bridge and then turned right up the path which is just to the right of it. Its a steep climb, through trees to begin with, which combined with a very warm and muggy morning, made the initial stages of the walk very warm work indeed with lots of brow mopping. 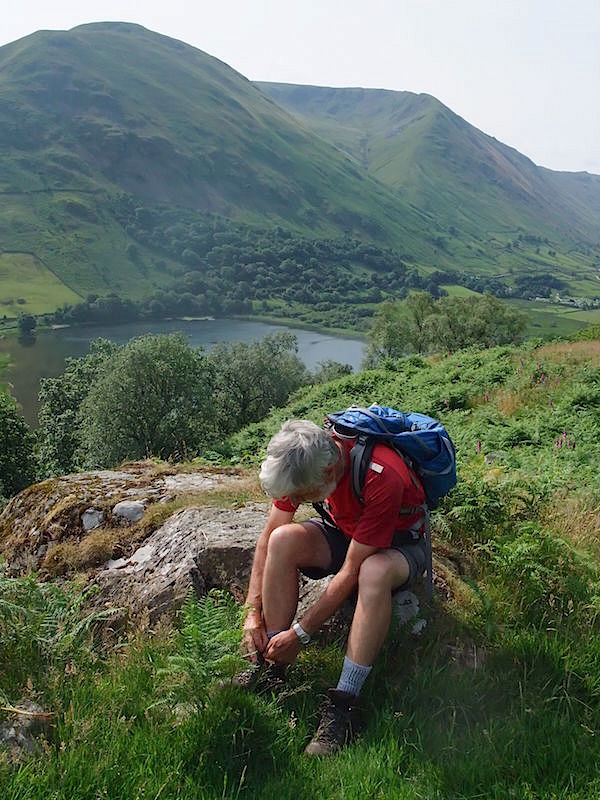 One of those times when you just have to get that bit of twig out from between your boot and your sock. Its been niggling away all the way up to the ridge 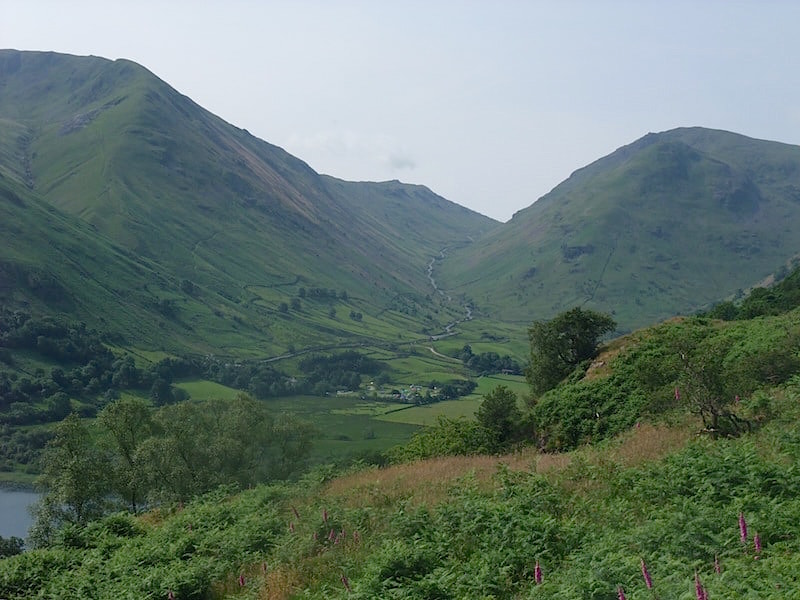 Comfort restored so we continue along the ridge watching the traffic making its way along the Kirkstone Pass between Caudale Moor, on the left, and Red Screes on the right. 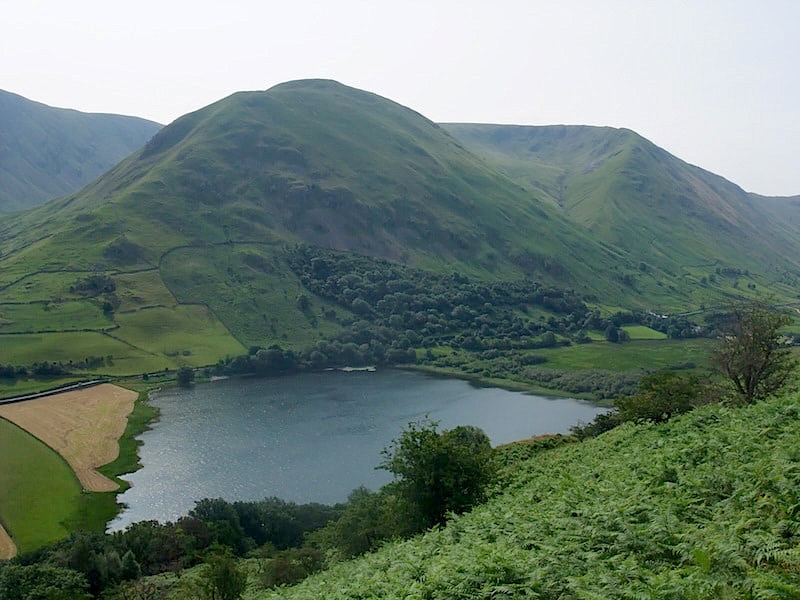 Just below us is Brothers Water nestling below the very steep slopes of Hartsop Dodd. 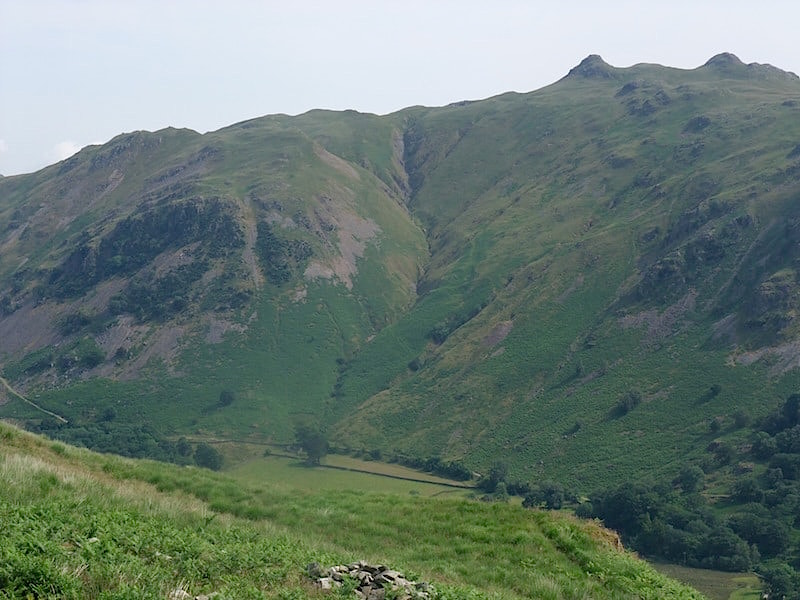 A view of Angletarn Pikes behind us as we sweat our way up. 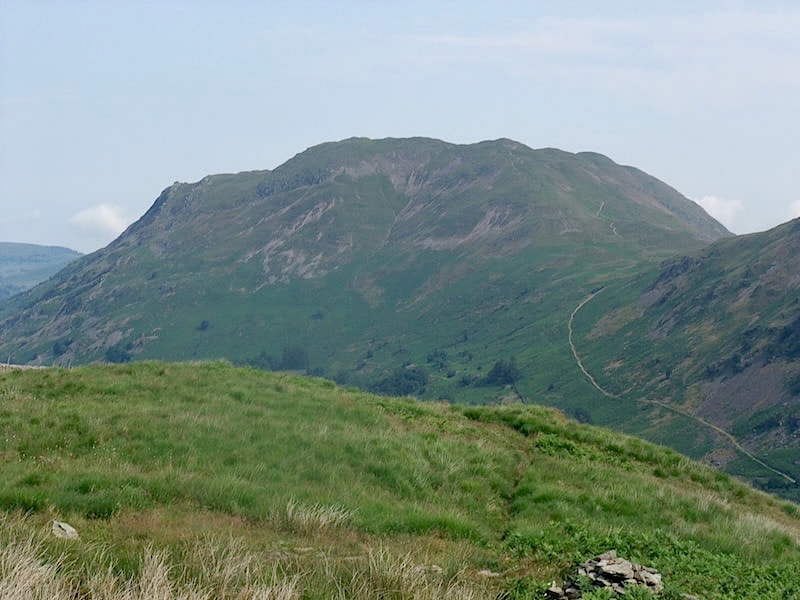 Another brow mopping pause gives me a chance to look behind for this view of Place Fell. 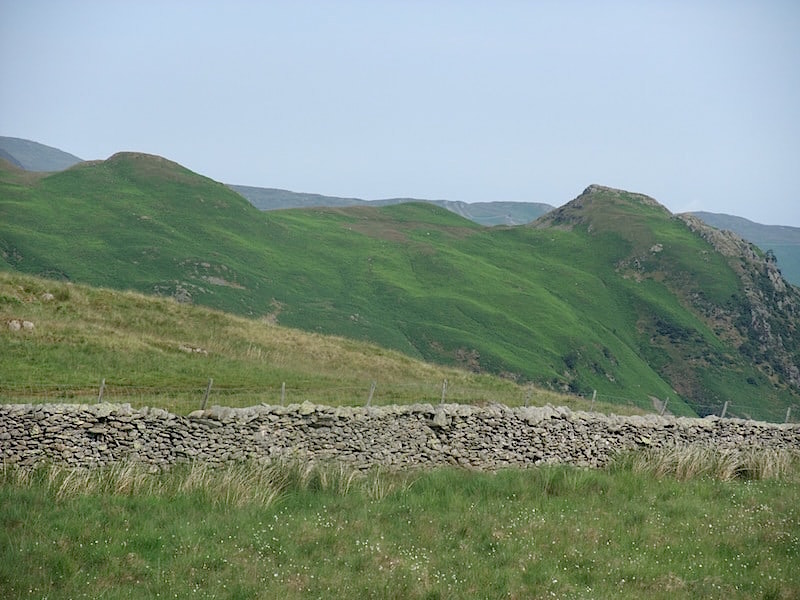 Across the wall is the knobbly top of Arnison Crag. 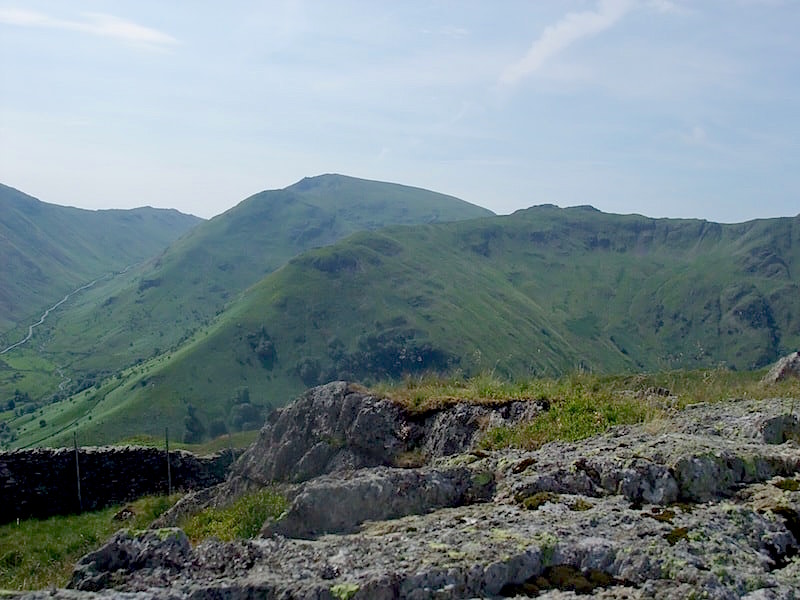 The ridge across Hartsop above How is very long but the view ahead offers plenty to look at as you tramp across. The two lumps to the right of centre are the two tops of Little Hart Crag, which eventually sweeps down to High Hartsop Dodd in the middle foreground. To the left of the two high points are Red Screes with Middle Dodd just in front of it. 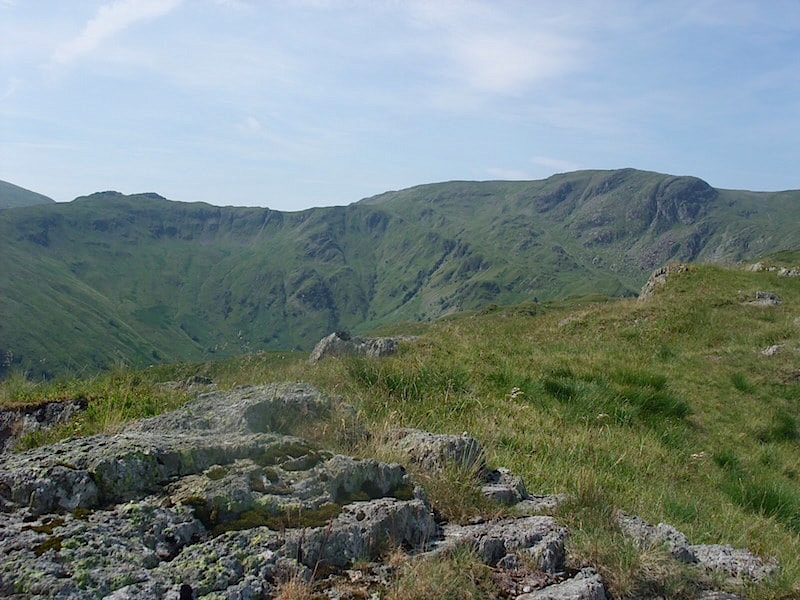 Over to the right of the tops of Little Hart Crag are the bulbous slopes of Dove Crag ….. 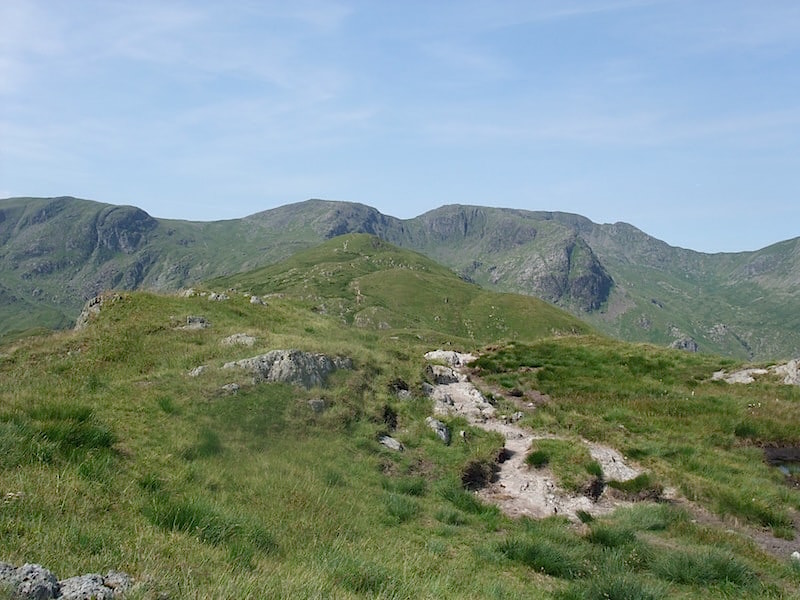 ….. and looking along the ridge ahead, with our summit at the end of it. On the skyline to the right of Dove Crag, on the left now, is Hart Crag and then Fairfield and Cofa Pike followed by the long sweep across to ….. 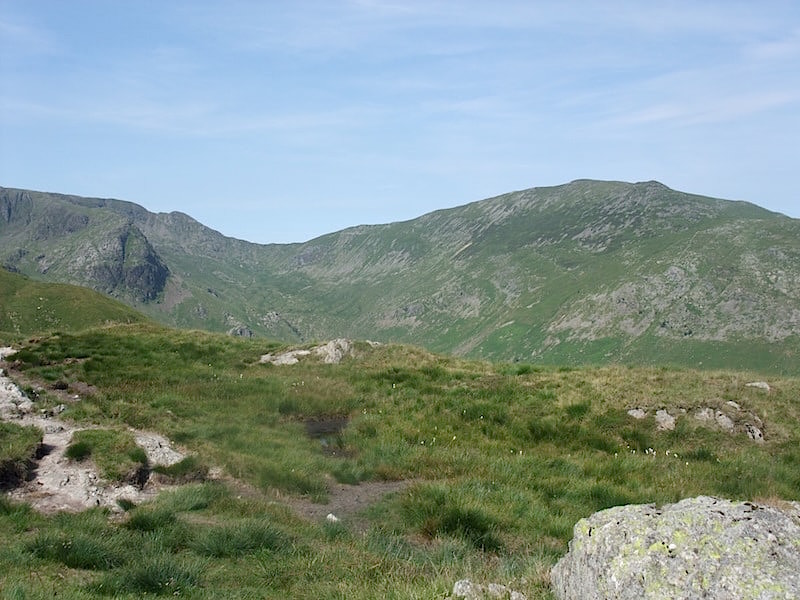 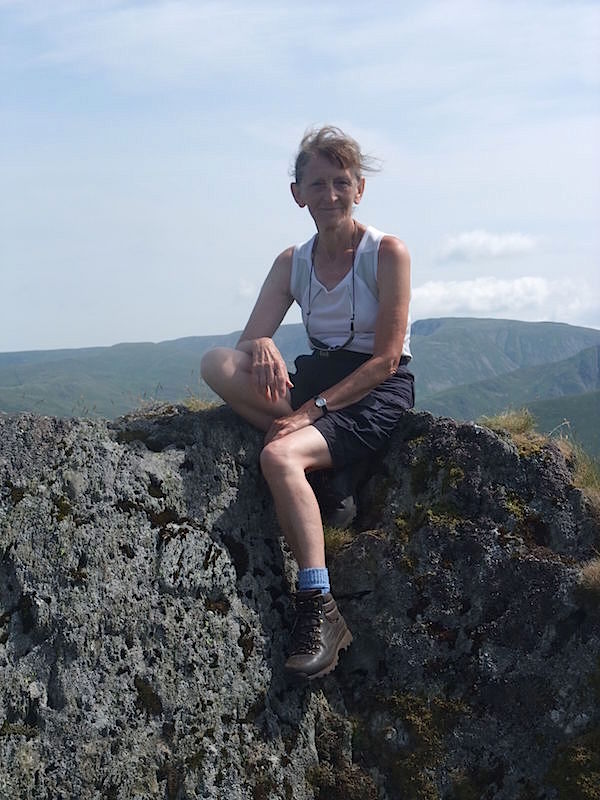 Time for a lunch break on the summit of Hartsop above How. Just as we were packing our gear to continue on up to Hart Crag a large group of walkers came past us along the path, all of them twittering away like a bunch of sparrows. We sat down again for ten minutes and let them get well ahead so we wouldn’t be mithered by the constant chatter. 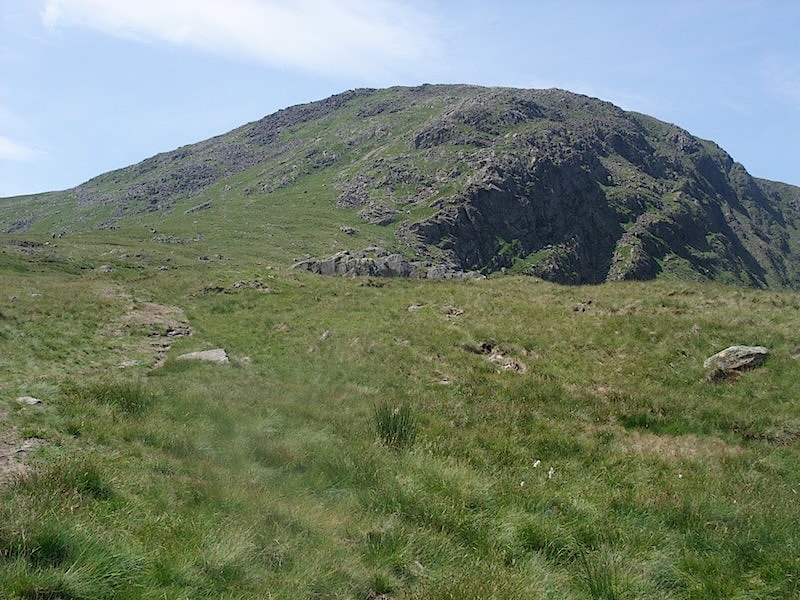 Off we go again and make our way over to Hart Crag. The path across is fine until the last steep section which is full of loose rocks and stones which slowed the pace quite a bit. You might be able to pick out some of the walking party ahead of us on the extreme left of the shot. 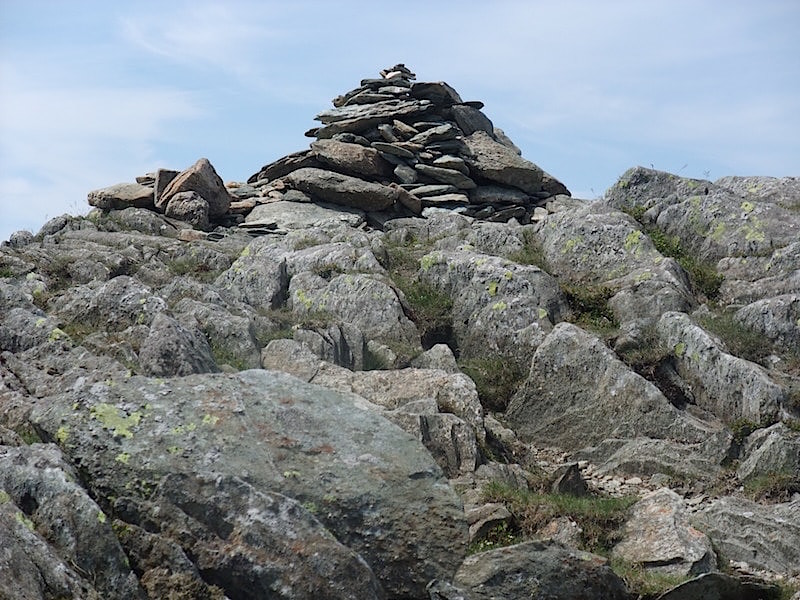 Hart Crag was very busy so I dropped a little below the cairn to get a view of it free of the summit clutter. 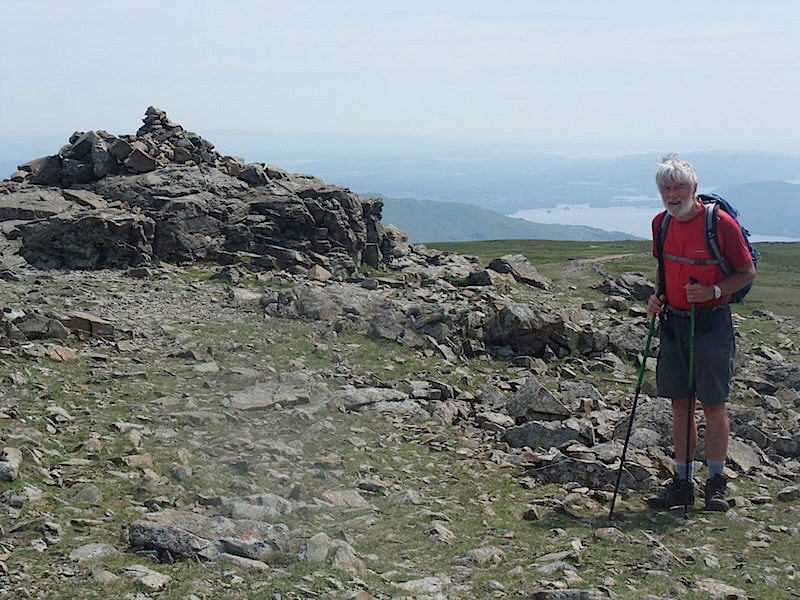 There were constant coming and goings on Hart Crag and it became much too busy to hang around so we continued on to Dove Crag. It wasn’t much different here but I did manage a shot of the cairn by chopping off the luncheon party to the left of it. 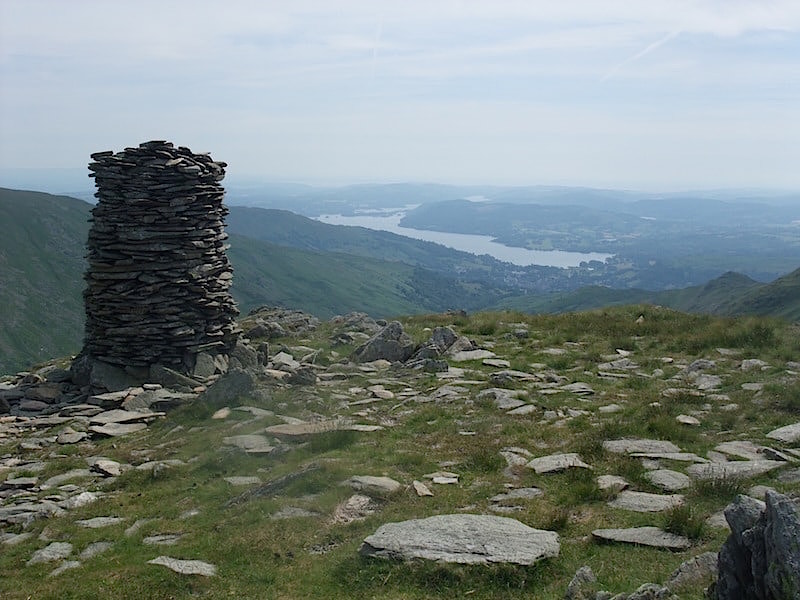 Peace and quiet were in short supply today so from Dove Crag we headed over to High Bakestones which we hoped would be a little more peaceful. It was, and it was a relief not to have all that endless chatter going on around us. 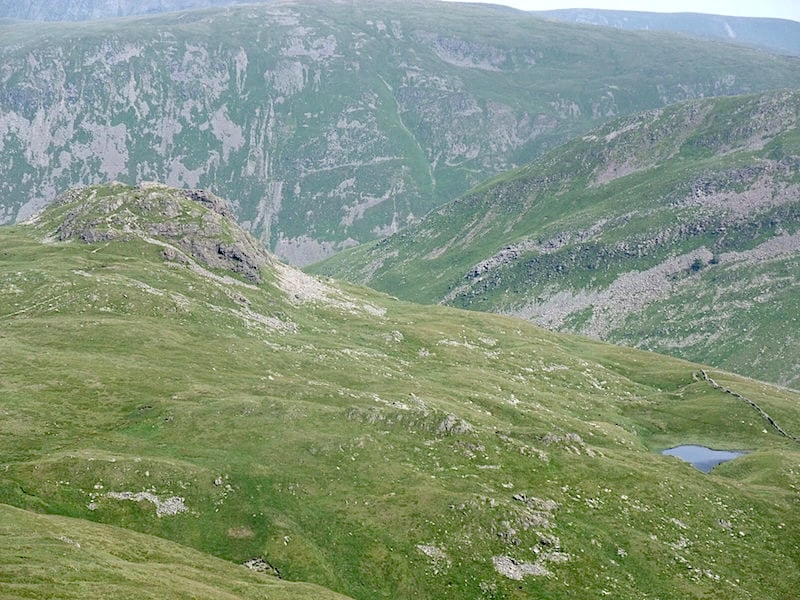 A look down at the rest of our route from High Bakestones. We’ll follow the path down to the tarn and from there walk down the Caiston Glen path and back to the car at Cow Bridge. 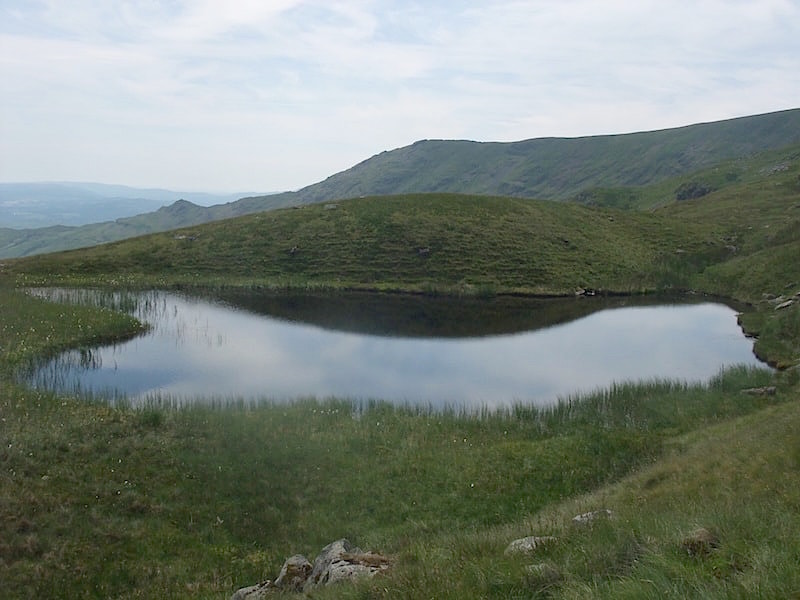 Here we are at Scandale Tarn and behind it a view of High Pike dropping down to Low Pike. 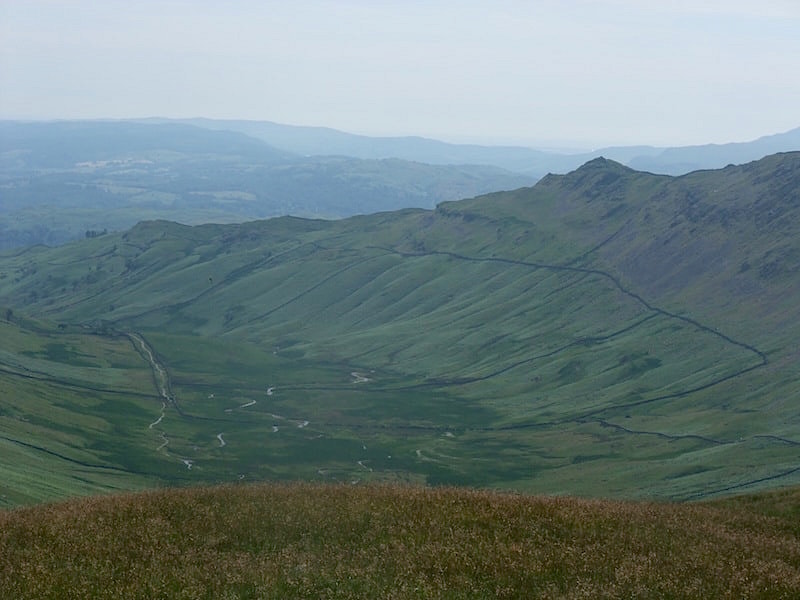 The distant fells are very murky now so not a lot to see. From the tarn area there’s not too bad a view down to Scandale with Low Pike high above it on the right. 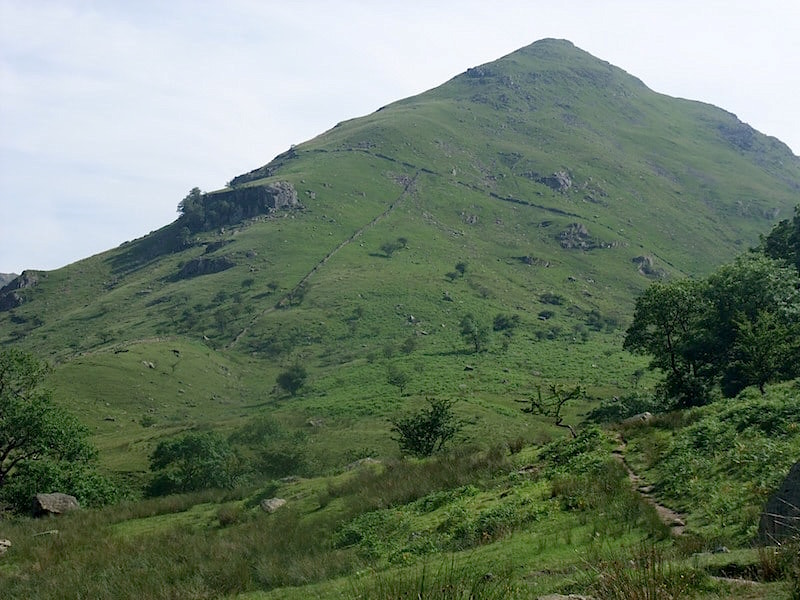 The path begins to turn away from Caiston Beck, flowing between here and Middle Dodd over yonder, and begin to curve around the foot of High Hartsop Dodd ….. 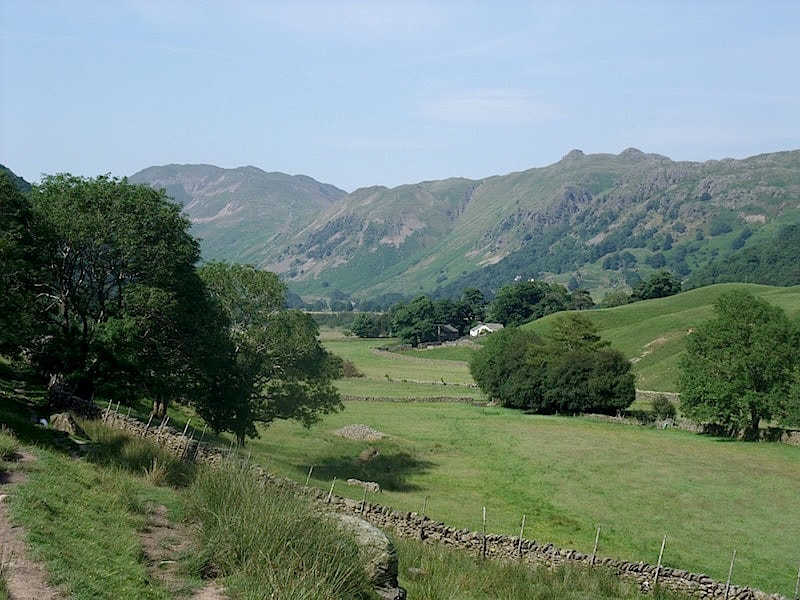 ….. alongside some very pleasant valley fields, beyond which we have a constant view of Place Fell and Angletarn Pikes. 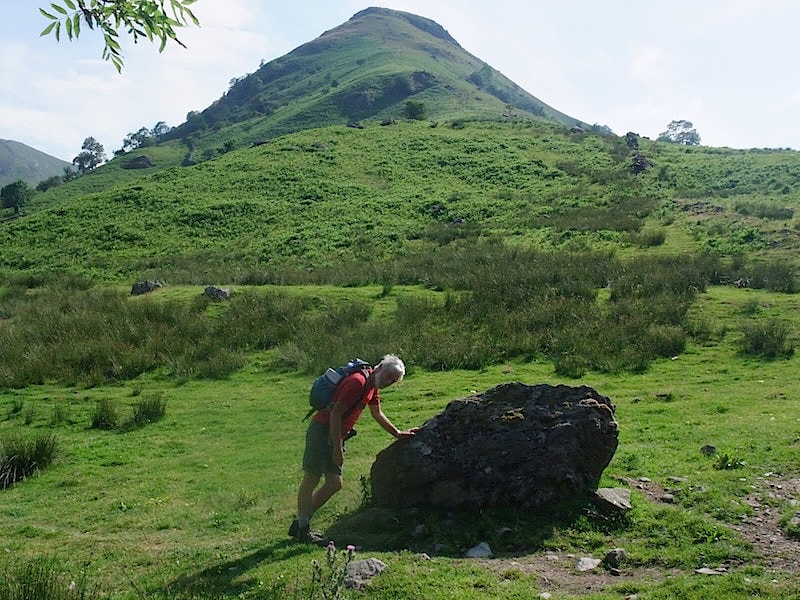 One weary walker (or pretending to be, I wasn’t sure which) at the foot of High Hartsop Dodd, another very steep climb if you start it from this direction. The angles of the old barn’s roof almost matching those of High Hartsop Dodd’s slopes behind it. AW didn’t include a drawing but he did make mention of it in his guide to this area. 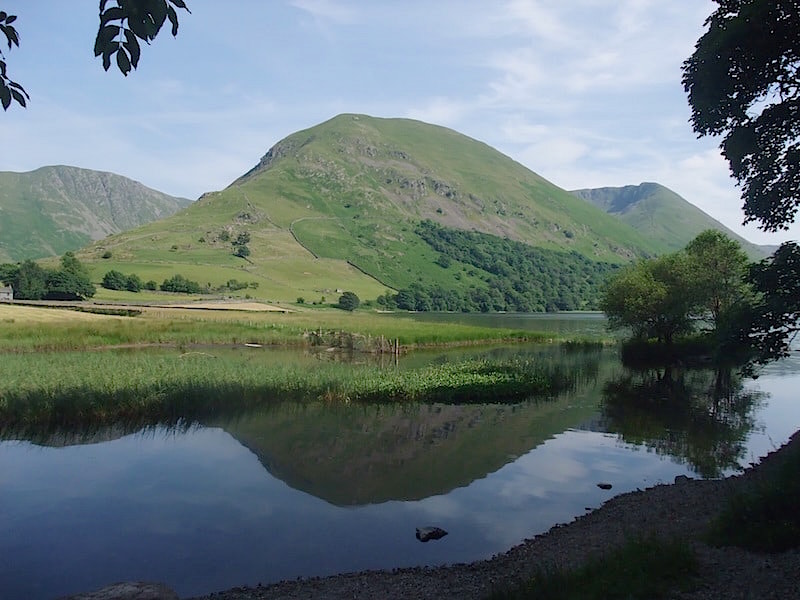 From the old barn near Hartsop Hall its a pleasant and easy walk back alongside Brother’s Water to the Cow Bridge car park where today’s walk comes to an end. Now there’s just the simple matter of extricating the car from the overcrowded car park, where some drivers needed a few lessons in considerate and good mannered car parking.