The weather has been awful since we were out last, high winds, lots of rain, and over the last week or so, snow showers and freezing temperatures, it hasn’t been the sort of weather to be out for a walk in. Today the forecast was for a cold dry day with sunny spells so we just had a short afternoon walk from Burnbanks along the Haweswater path as far as Measand Beck and back again, simply to take advantage of the break in the weather. 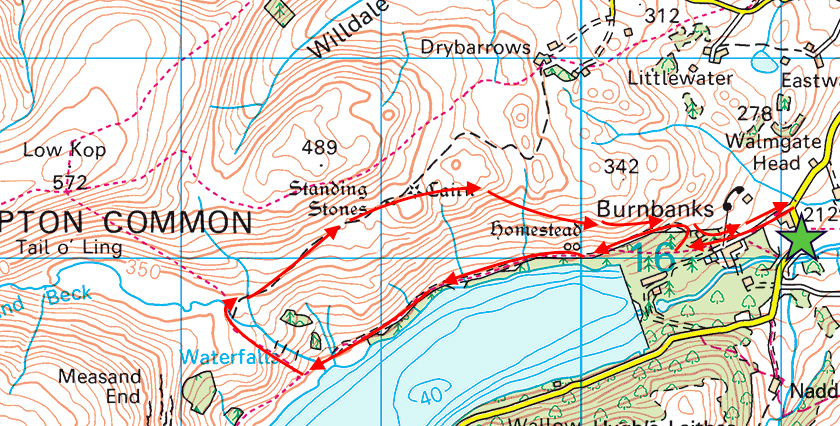 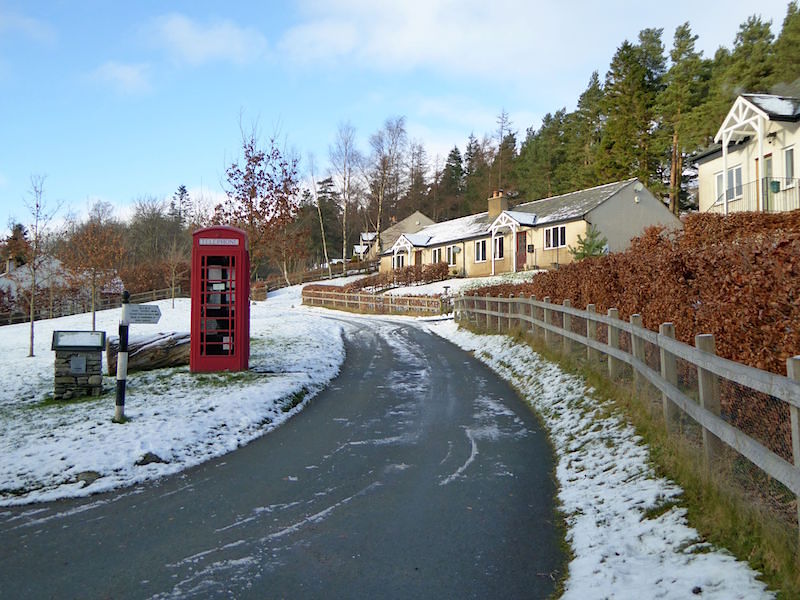 The familiar red ‘phone box in Burnbanks at the start of our walk. 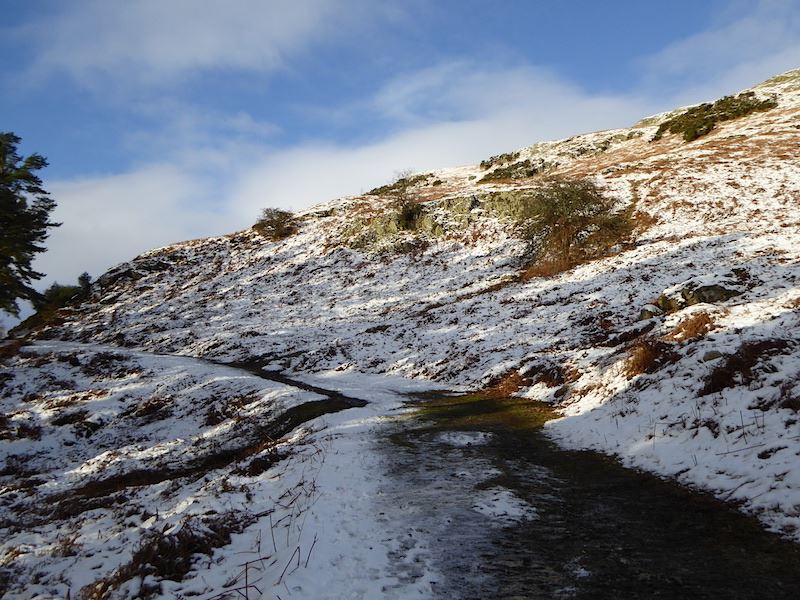 Following the path out of Burnbanks. 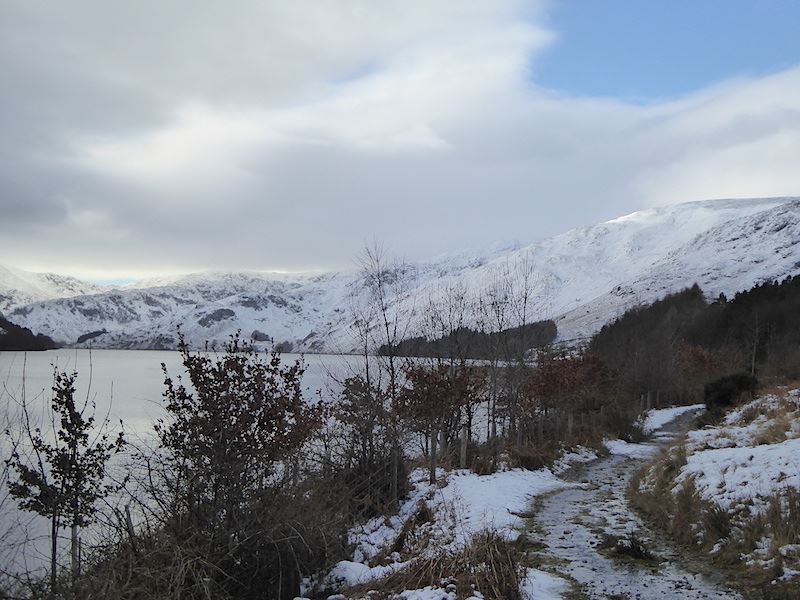 Looking towards the southern end of Haweswater from a very slushy path, there’s a slow thaw taking place and the snow has lost its crispness. 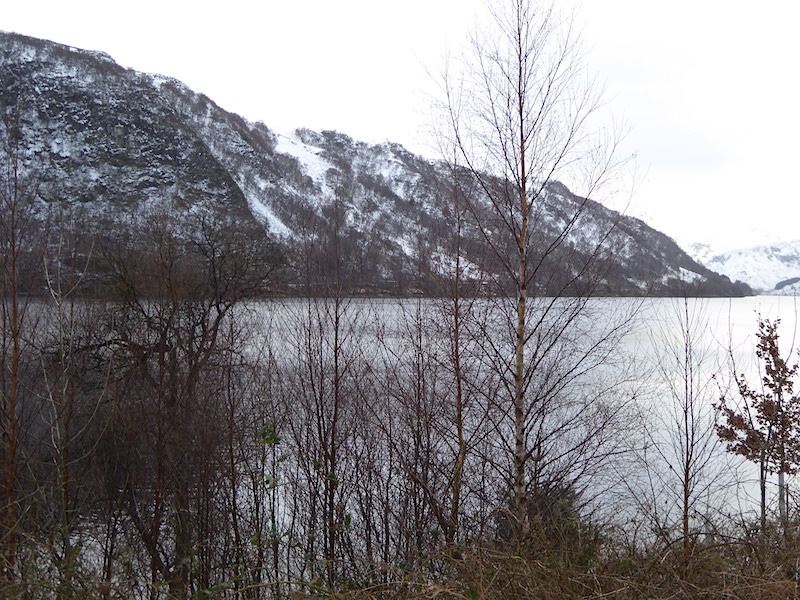 Its looking a lot gloomier on the other side of the water. 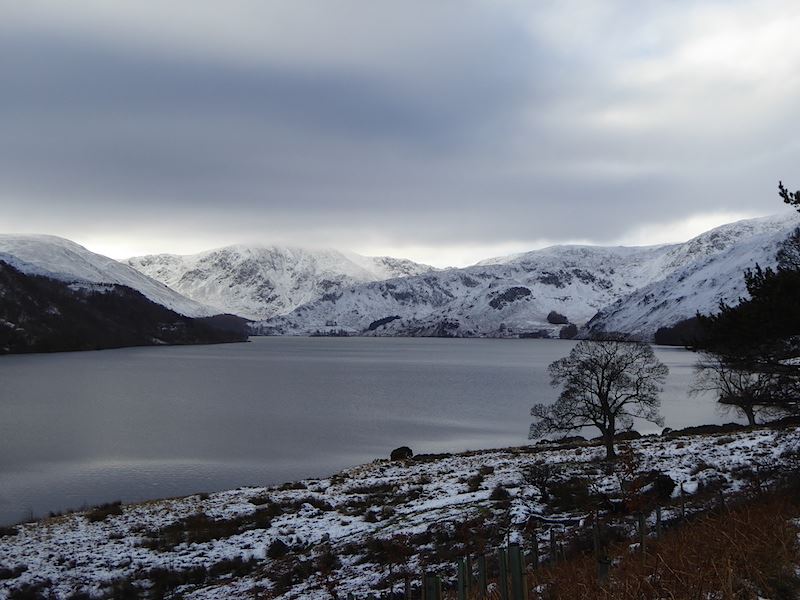 Harter Fell, in the centre, still has a covering of cloud, it wasn’t as cold as it looks. 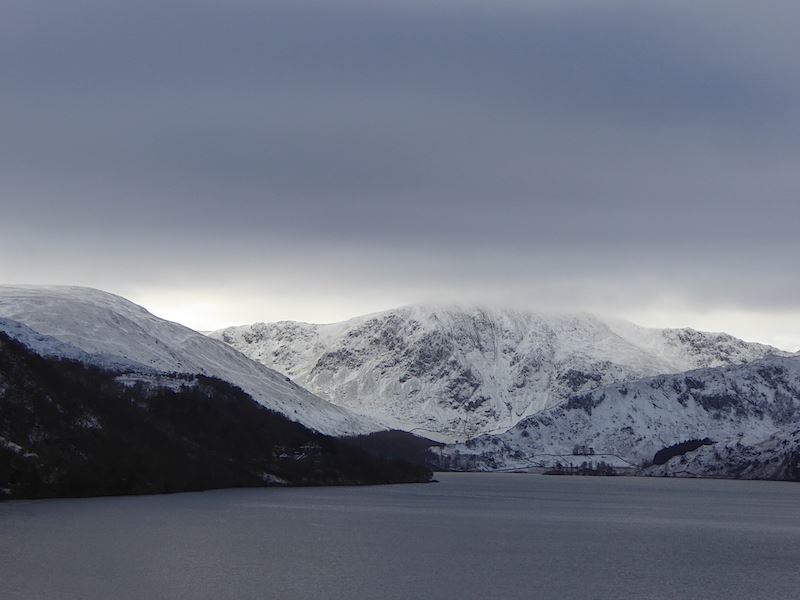 A close up of Harter Fell in the centre. This very dark and overcast weather  always makes me feel as if I’m watching one of those ‘aliens take over the earth’ type of films, you know the ones – the shadow of a huge machine from outer space slowly envelops the earth, everybody screams and looks terrified, the alien force takes over, and then its down to some muscle bound bloke, plus the obligatory female with a big gun and a small child, to save us all. Still we’re safe enough today, there’s only the two of us splashing through the puddles, the aliens must have thought better of it today. You can’t blame them given the lousy weather. 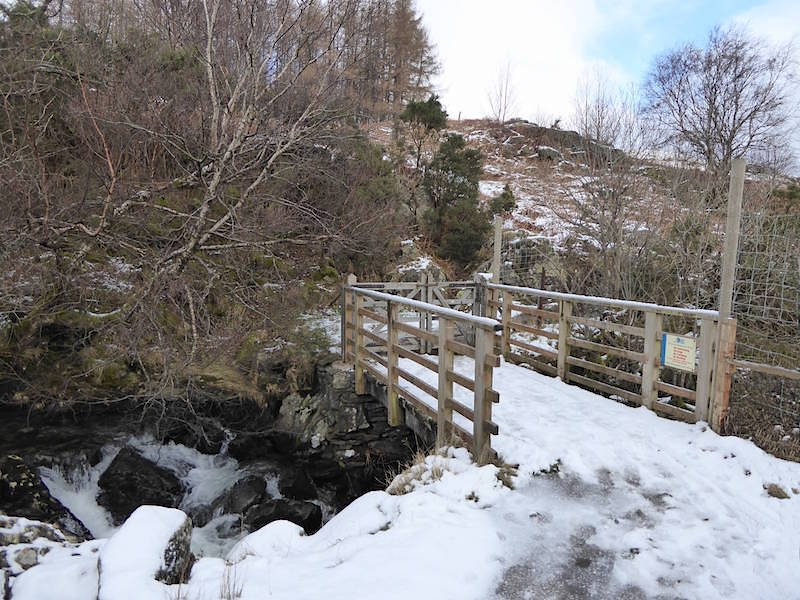 The first bridge over Measand Beck. 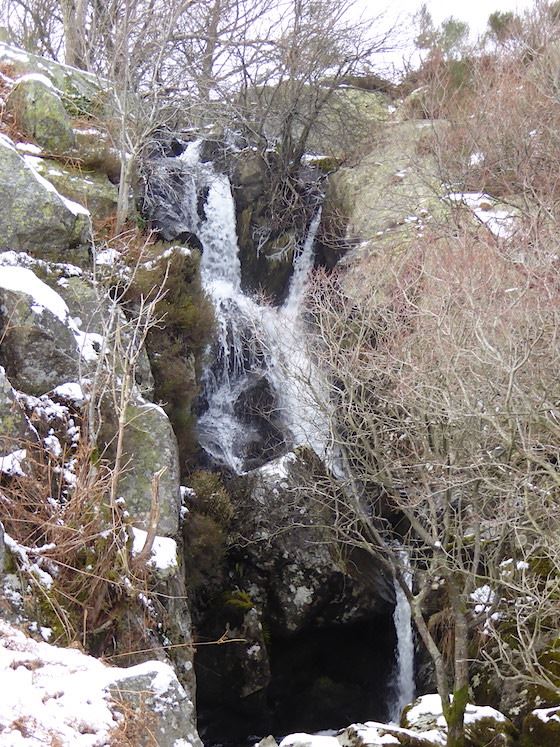 One of the many falls in Measand Beck. 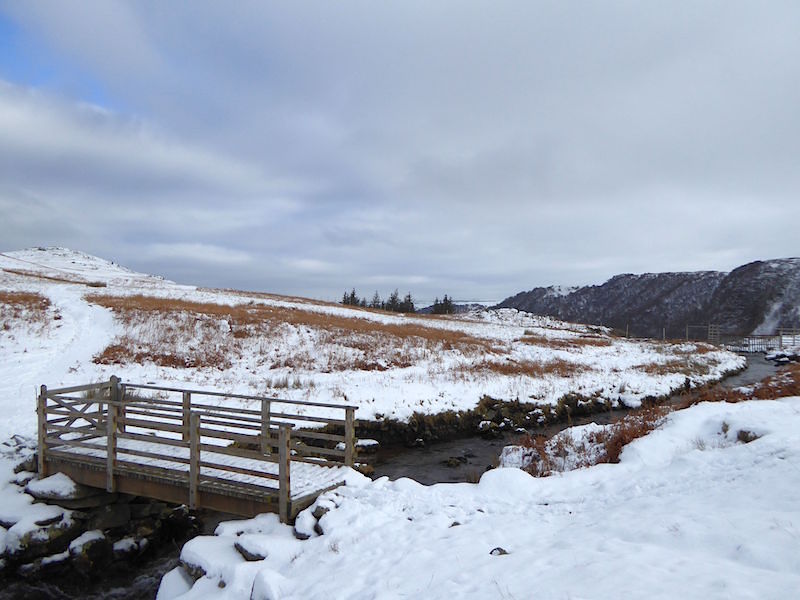 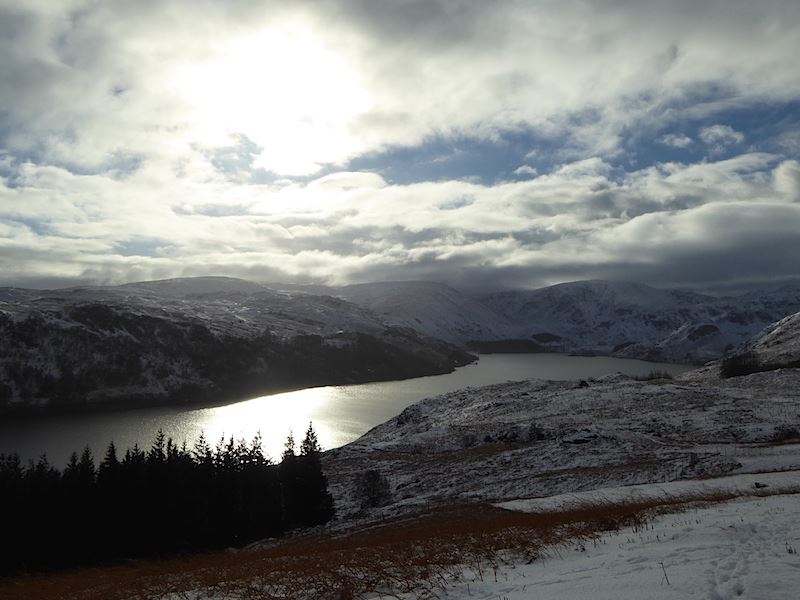 Moody blues over the southern end of Haweswater from our return path to Burnbanks. 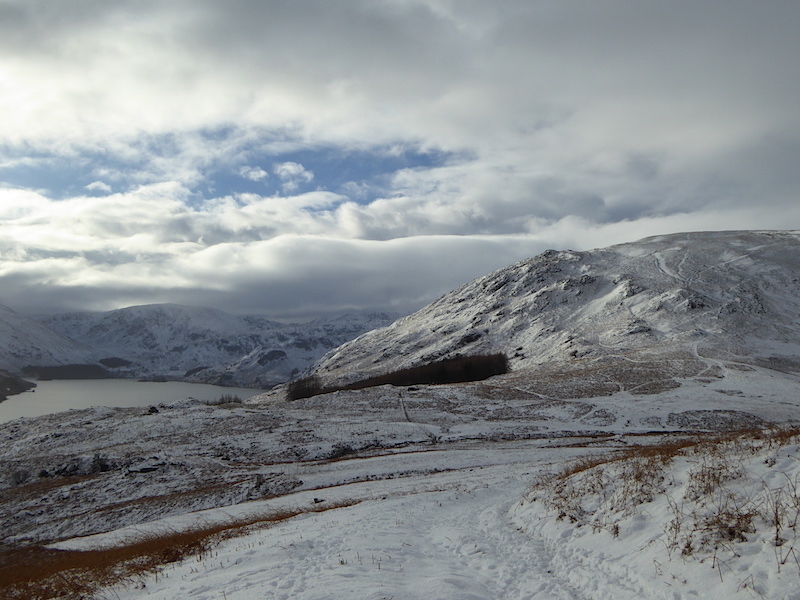 Looking back at Measand End,  the paths running up it eventually leads over to High Raise (the Mardale one). 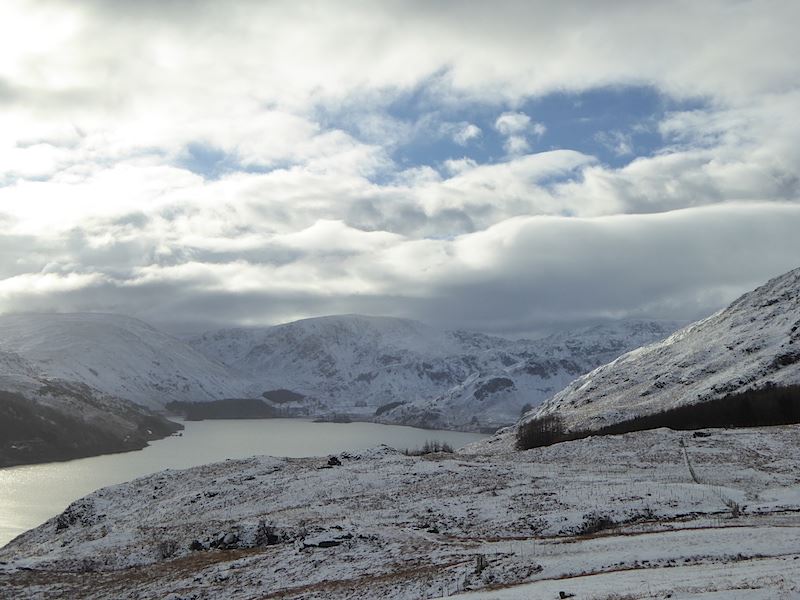 There weren’t many breaks in the clouds, but it was very pleasant when one came along. 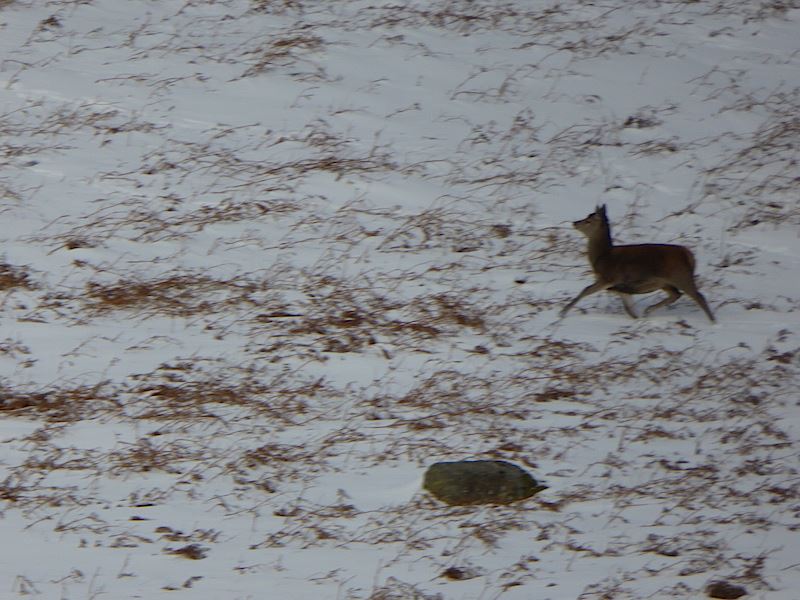 On maximum zoom to capture this shot of the deer scampering away from us. We were quite a distance from it but it ran like blazes the minute it spotted us. 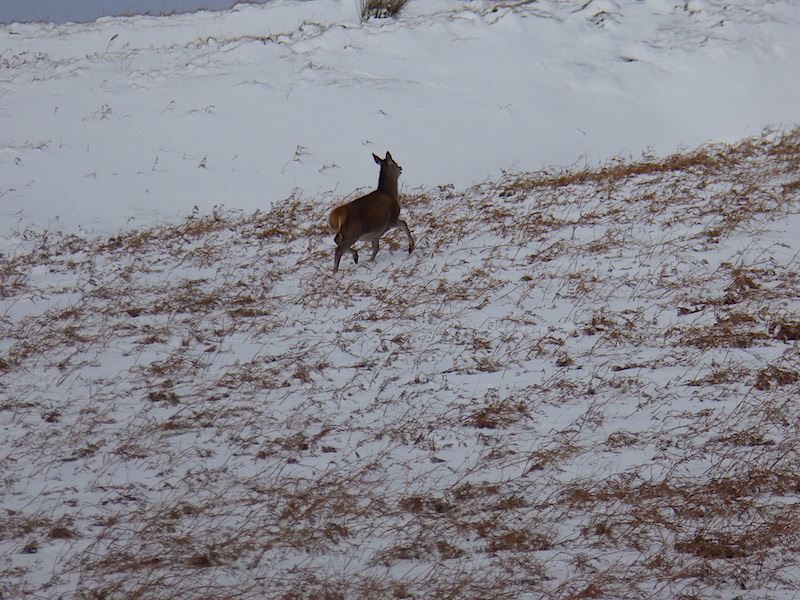 Up the hill it went and then disappeared from view. There must be a lot more deer around than this one judging by the amount of deer tracks we saw in the snow. 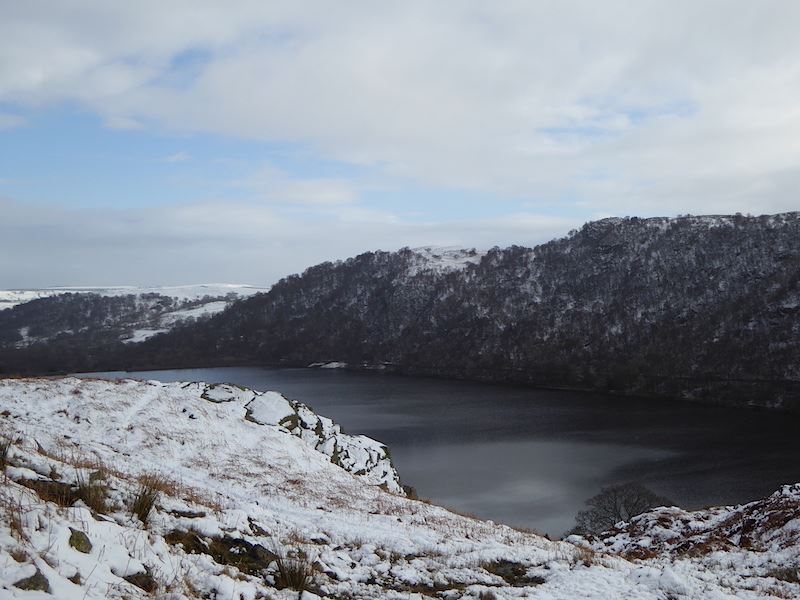 The skies begin to brighten as we head back toward Burnbanks. 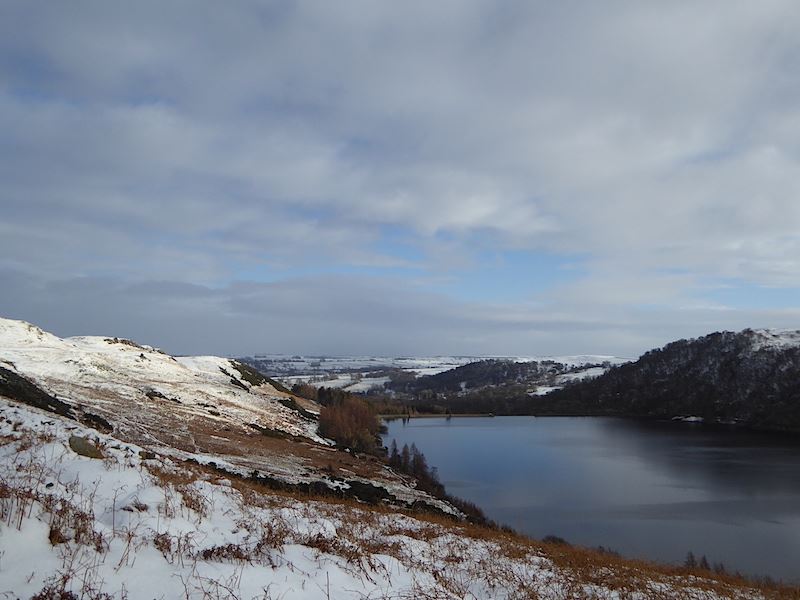 Looking towards the northern end of Haweswater. The dam can just be seen at the far end of the water. 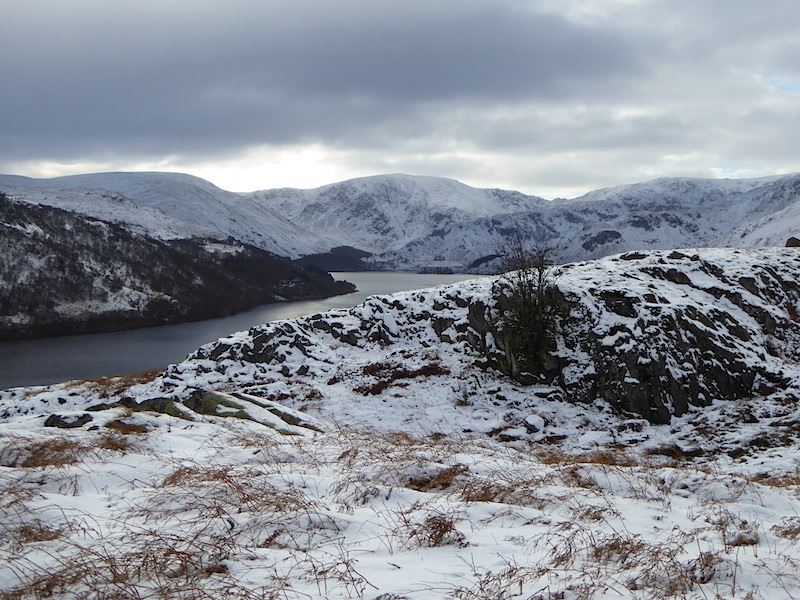 The skies are still gloomy over the southern end of Haweswater, but Harter Fell, in the centre, is finally free of cloud. 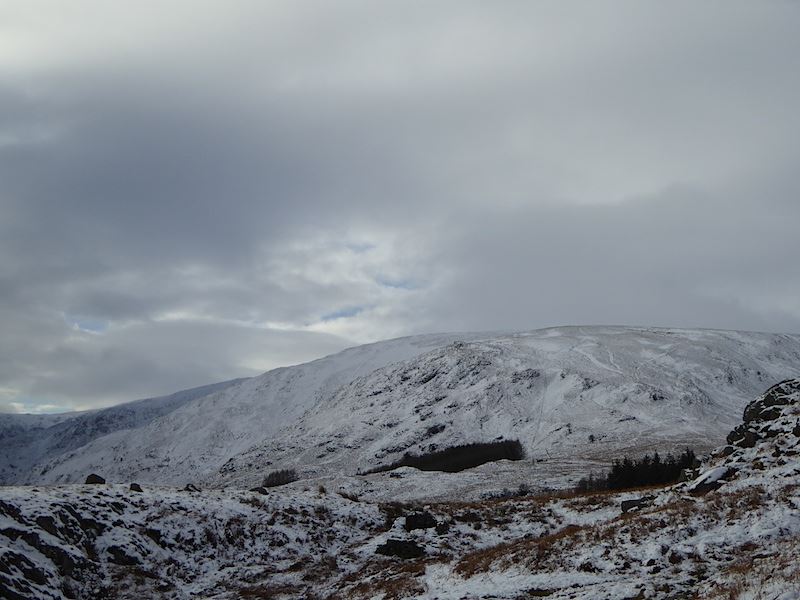 Another view of Measand End. When we returned to Burnbanks we decided to drive around Haweswater up to Mardale Head so I took a few photos from the roadside while we were there ….. 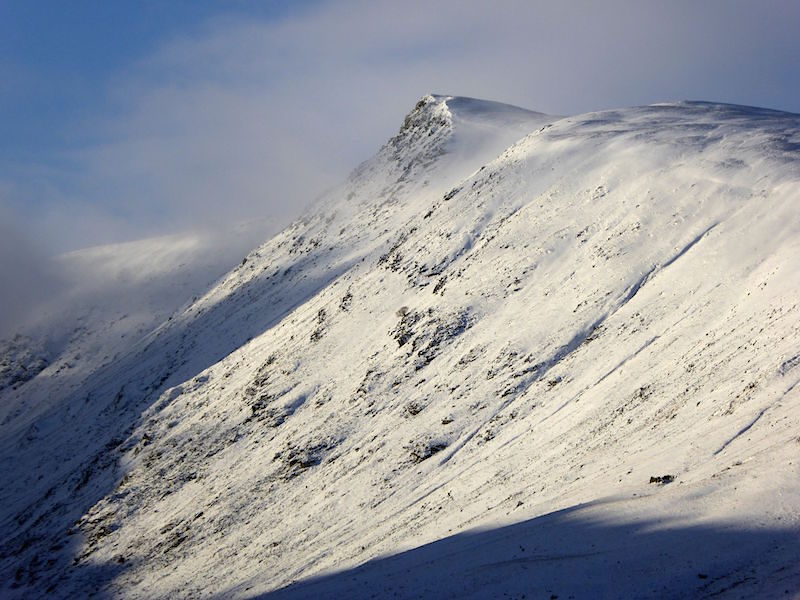 A close up of Kidsty Pike. 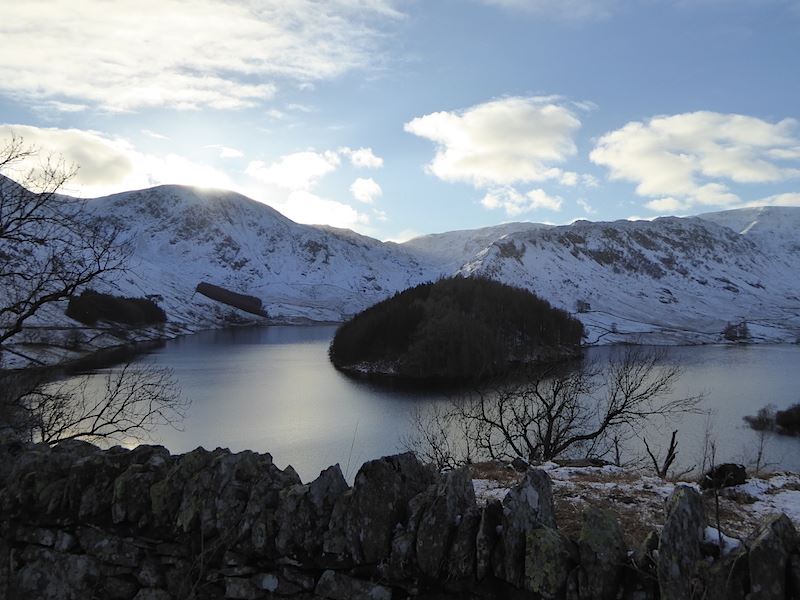 Haweswater and The Rigg, which is the tree covered promontory in the centre. 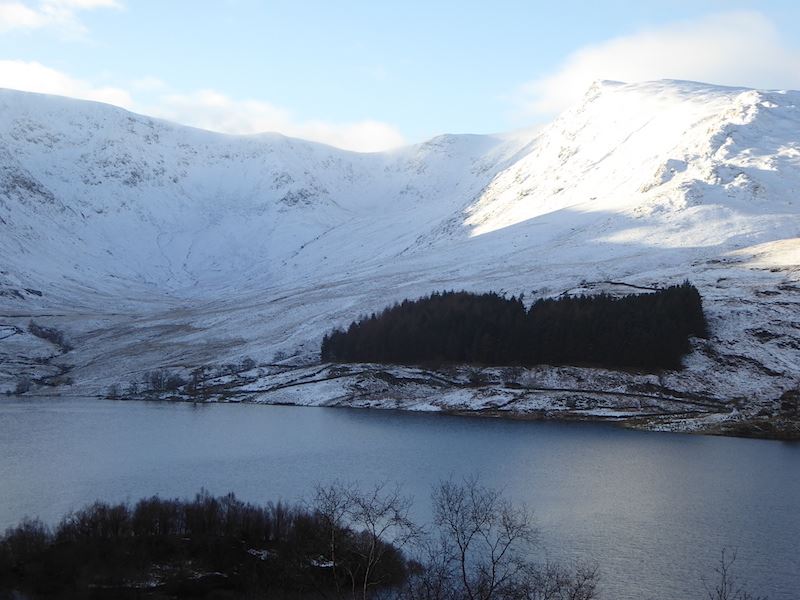 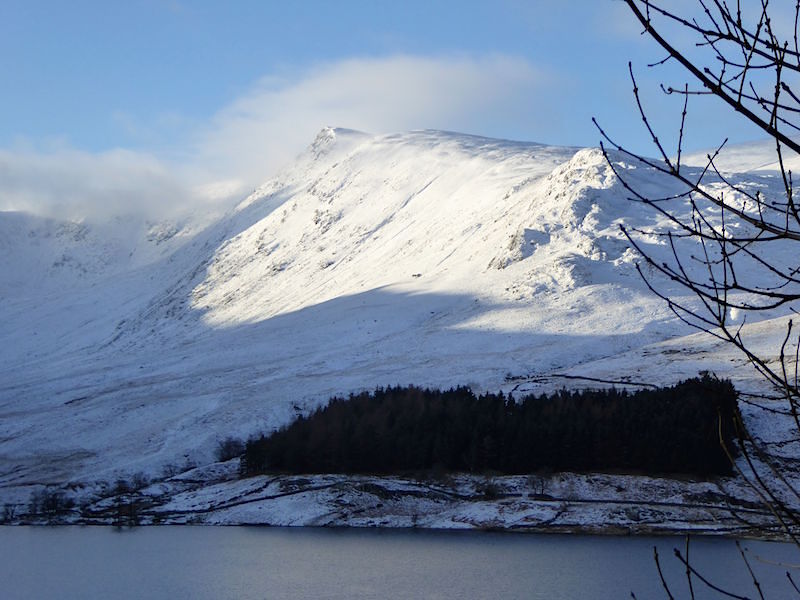 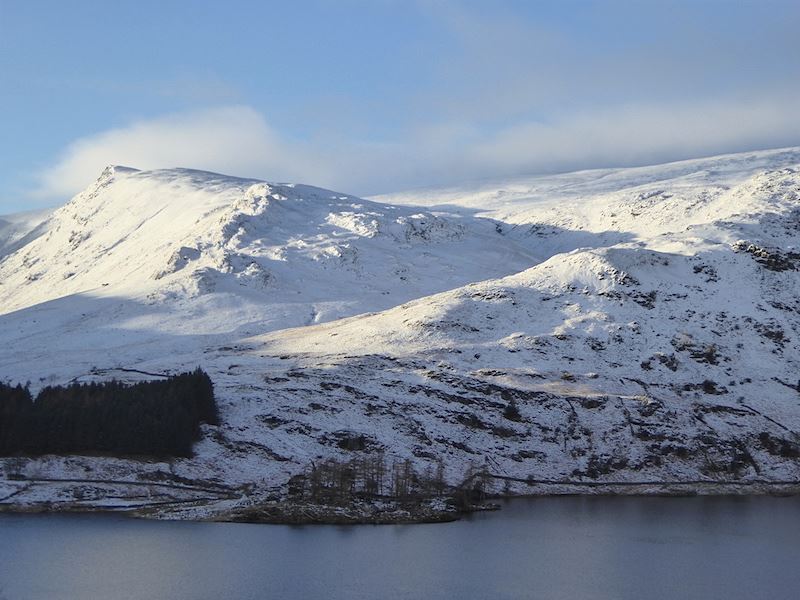 Kidsty Pike on the left, and somewhere under the cloud on the right is High Raise. 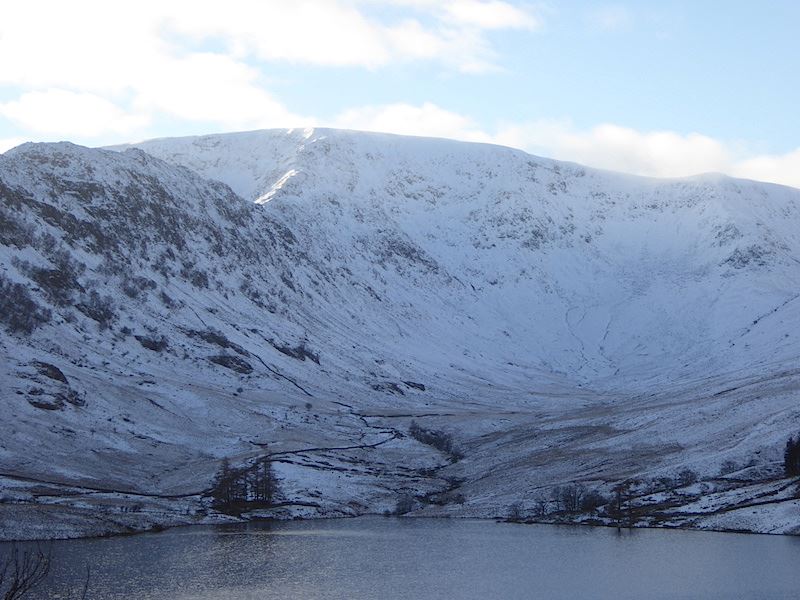 Looking up Riggindale to High Street. Only the higher fells have any light on them now that the sun has gone down more, and its quite gloomy down at valley level so its time to put the camera away and head for home.