Its been a while since I posted a walk report thanks to the grim weather and poor light conditions. We have been out for short local walks but the weather has been so gloomy and the light so dim that it hasn’t been worth taking the camera, especially as we only repeated many of the same walks we did earlier in the year so there seemed little point. This morning was just as gloomy but about 1.15 p.m. the low cloud vanished and blue sky began appearing, and that hadn’t been in today’s forecast. As there were only a couple or so hours of daylight left we decided to take a drive over to Orton, on to Kirkby Stephen and Nateby, follow the River Eden along the valley between Mallerstang Edge and Wild Boar Fell as far as the Moorcock Inn and then head for home via Sedbergh. We woke up to snow yesterday morning so here are a couple of shots I took from the garden – 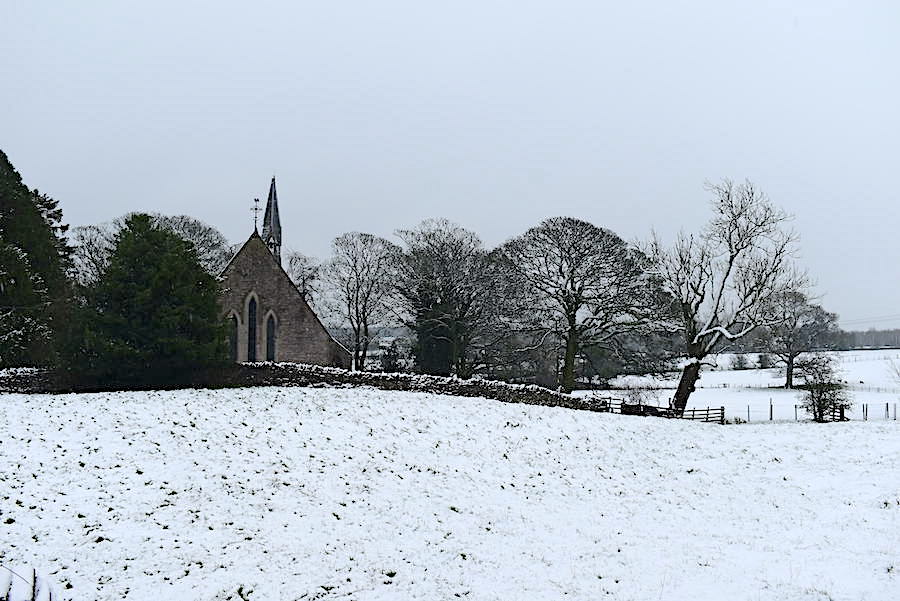 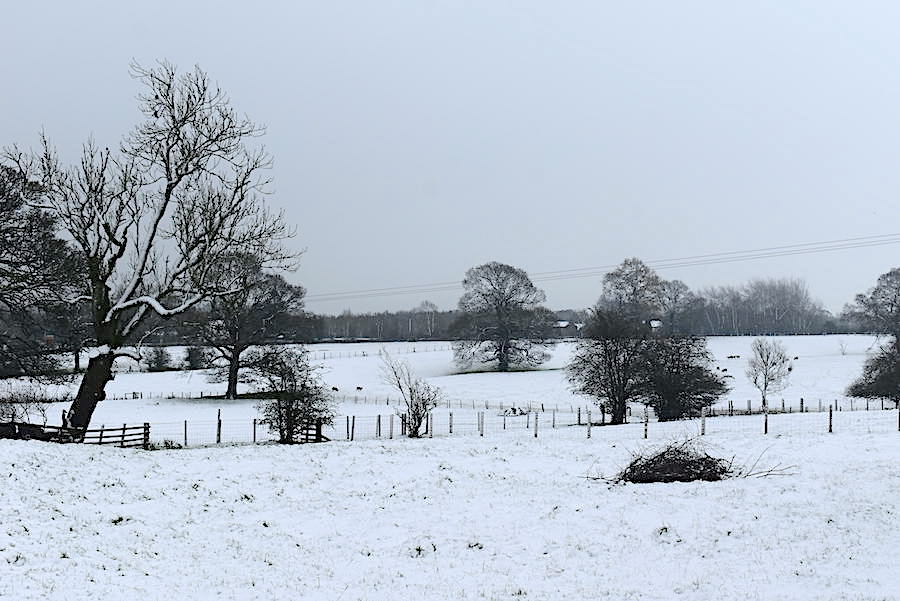 The snow was very wet, the skies remained grey, the falling snow eventually turned to rain and by the end of the afternoon the snow had vanished. There have been many days recently when the cloud has been so low even the trees haven’t been clearly visible. Its been a very wet and gloomy autumn up here for the most part so we were grateful for the couple of hours of sunshine we enjoyed during this afternoon’s drive. 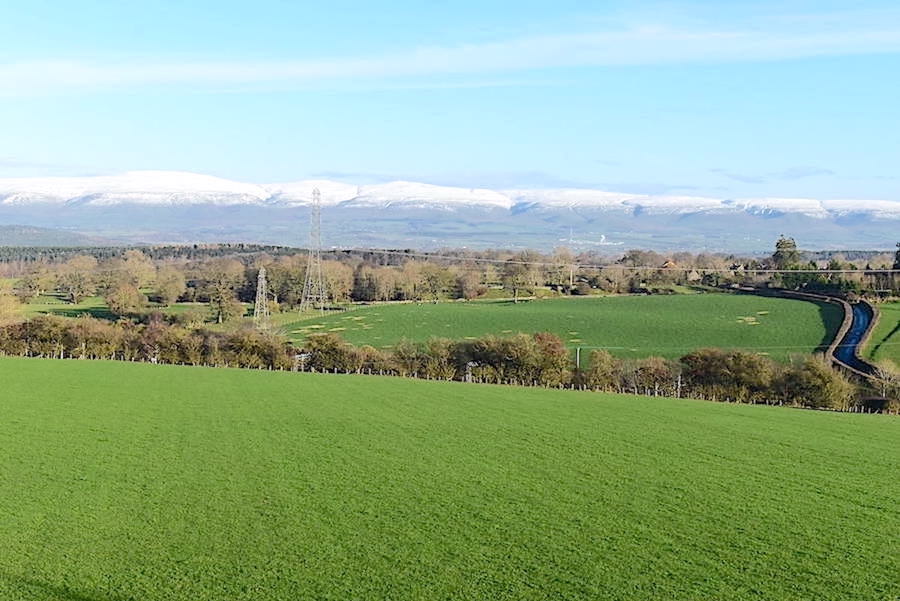 Well, the snow may have gone from  just about everywhere else so it was a lovely surprise to see that the north Pennines, cloud free at last, now have a substantial covering. We’ve just driven out of the Eden Valley via the little lane to the right and before turning on to the A6 towards Shap my driver (J) very kindly stopped so I could take this shot. He was to do that quite a few times today. 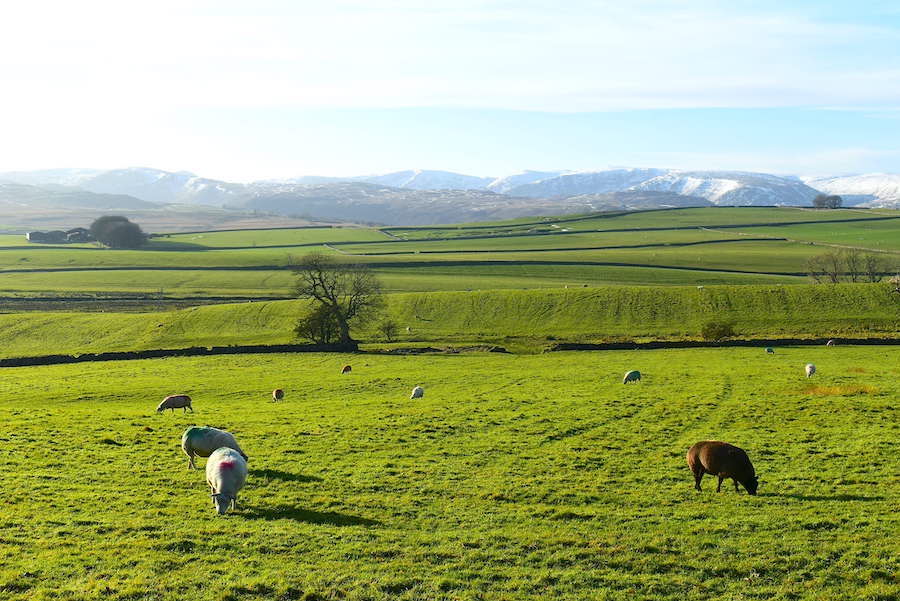 On the A6 now and heading for Shap with a brief stop in a lay-by for a look across at the partially snow covered Far Eastern fells. On the centre skyline is High Street with Kidsty Pike and High Raise to its right with the Shap fells in between us and them ….. 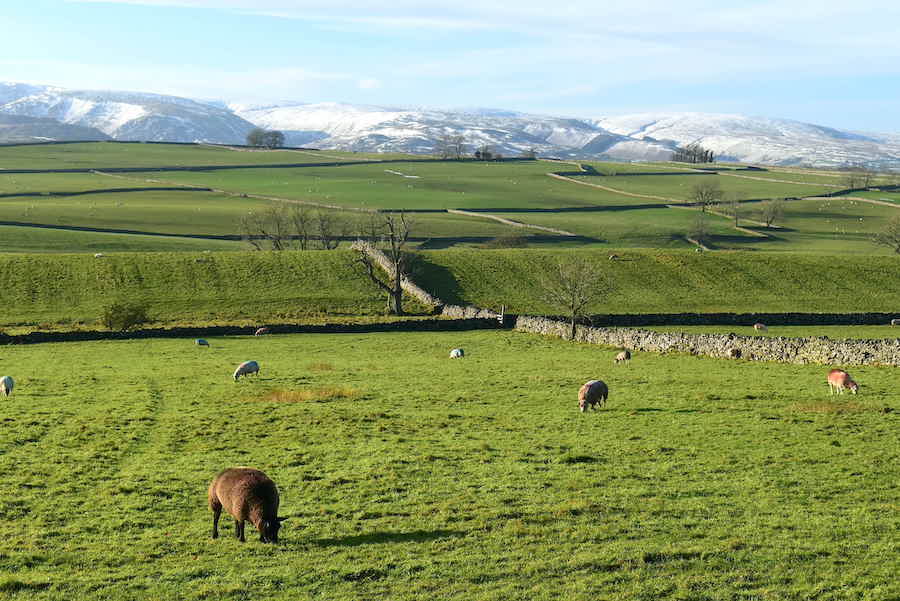 ….. then a little further to my right for this shot of the various humps and bumps of Bampton Common. 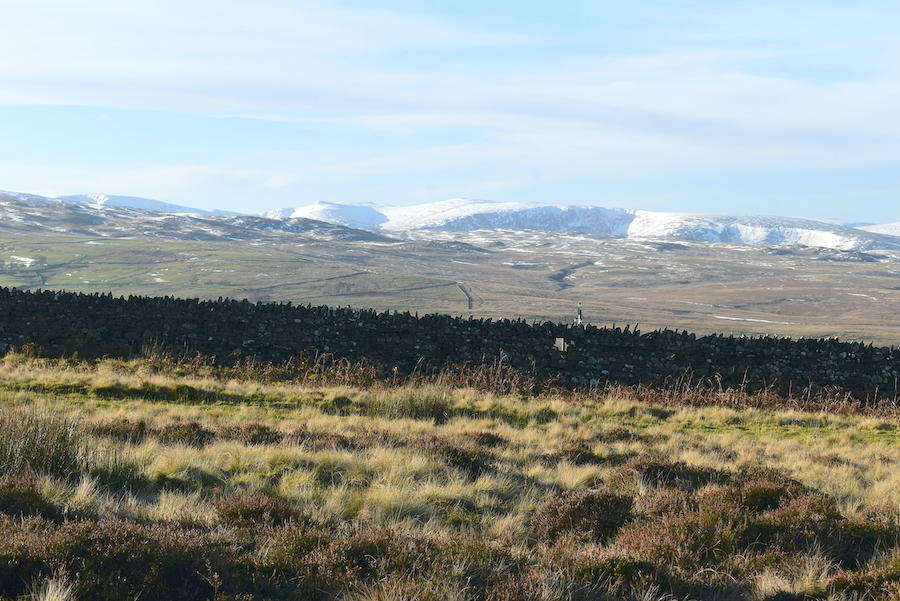 On the skyline from left to right – High Street (just), Kidsty Pike looking a bit more pike like from here, High Raise, Low Raise and Long Green. The shaded area below Low Raise is the steep craggy area known as Whelter Bottom. We carry on through Orton, Kirkby Stephen and Nateby without any further stops and eventually reach ….. 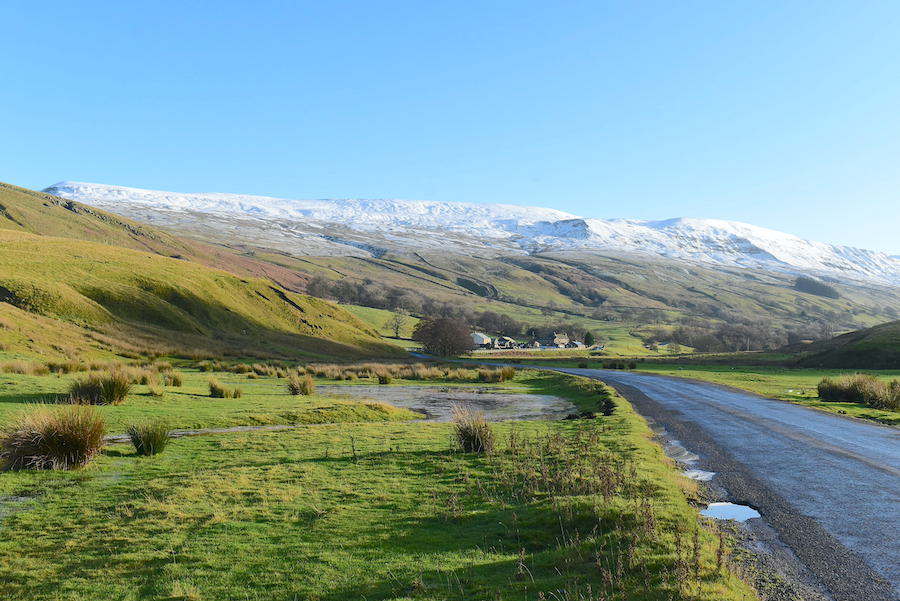 ….. the flat valley bottom which the river Eden is winding its way through over on the right. On the skyline are the very snowy Mallerstang Edge and Hangingstone Scar where it will be a whole lot chillier than when we were up there on a hot day in June this year. This part of the valley is very popular in summer, there’s plenty of space to park, camp, have a picnic and a paddle or just get the folding chairs out and let the world go by for an hour or so. A bit too chilly today though for any of that and there wasn’t a soul around. 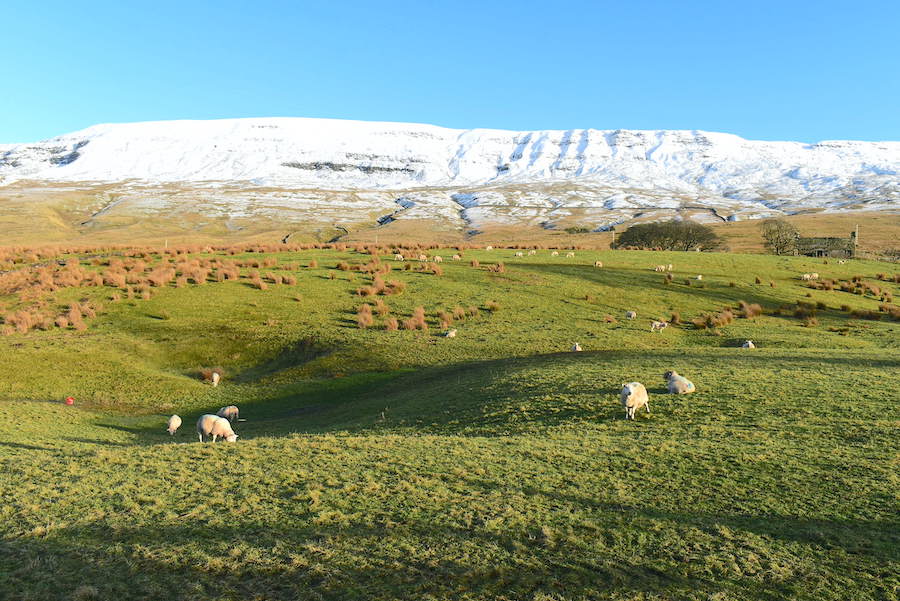 Another shot of Mallerstang Edge ….. 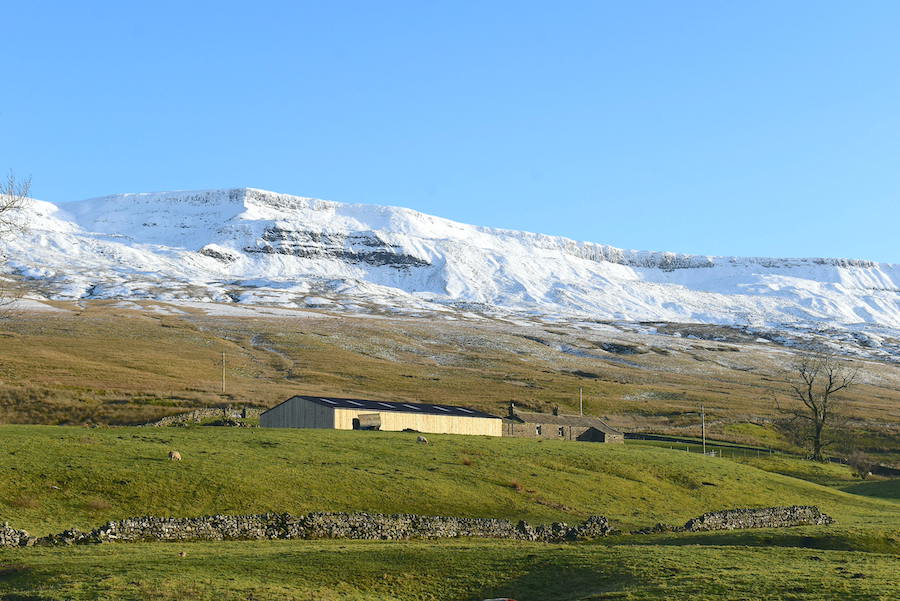 ….. followed by this one of Hangingstone Scar. 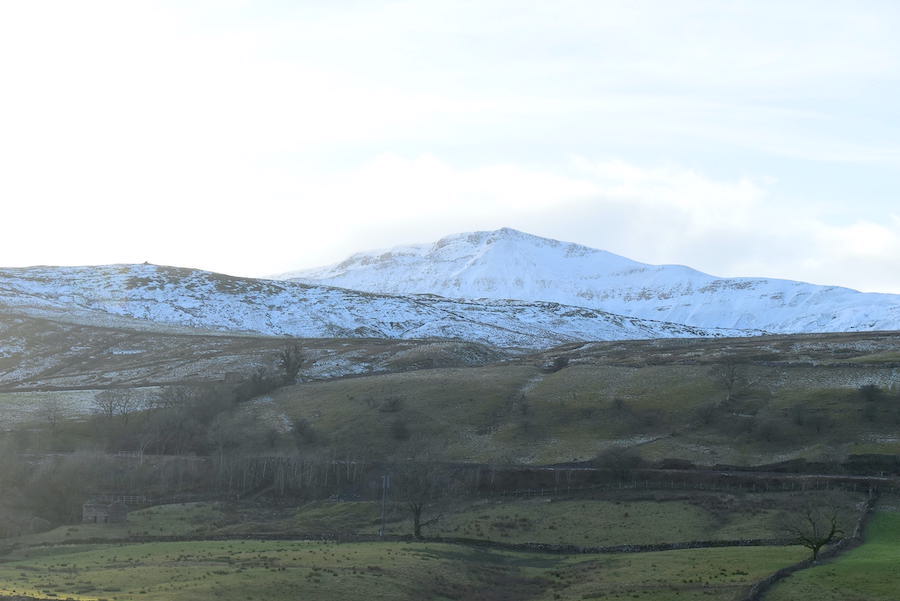 From the parking area at The Thrang a view of Wild Boar Fell. We parked here on that hot day in June this year I’ve just mentioned and it was good to see that the two yellow abandoned cars have been removed. If you have a look at our 1st June 2020 walk and you’ll understand what I’m referring to. 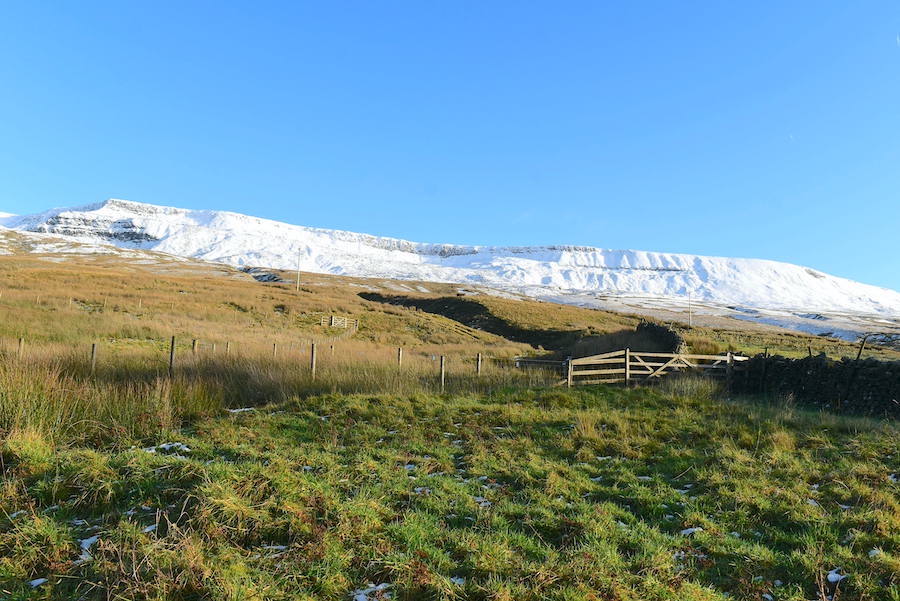 From the parking area another shot of Hangingstone Scar. 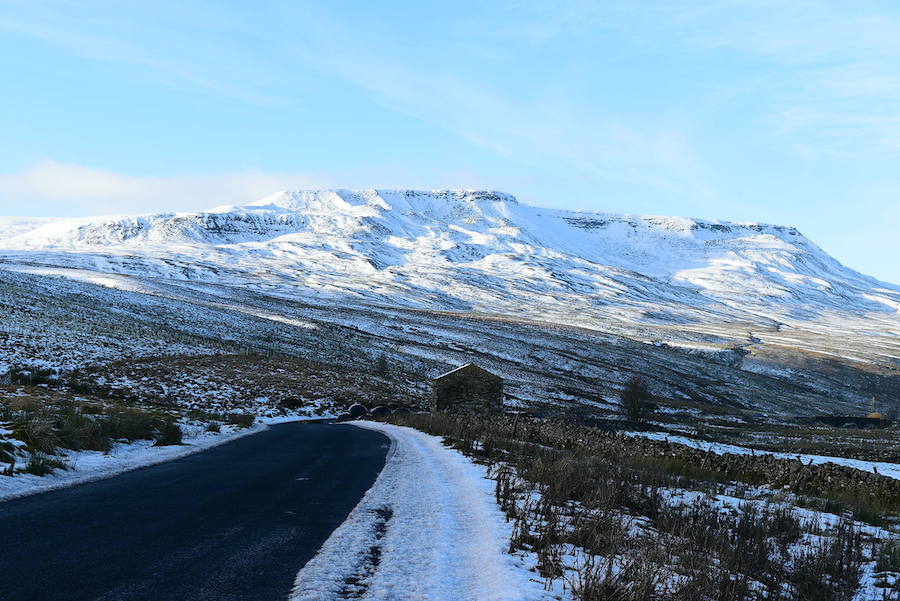 Climbing out of the valley now with a stop for a look back at Wild Boar Fell, looking superb in the afternoon sunlight. Very cold up here of course and the snow beside the road was frozen solid. 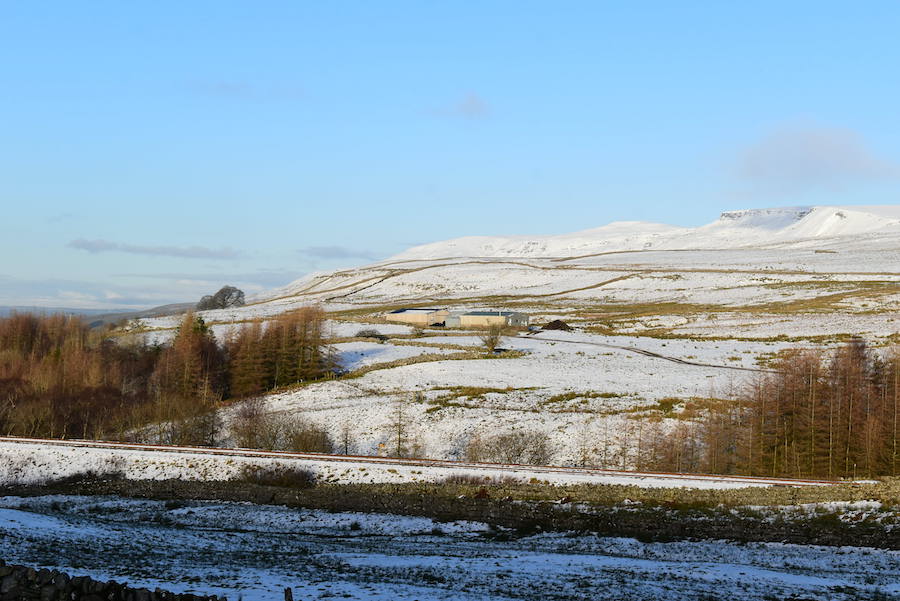 Looking across the railway line over to the snow covered fields below Hangingstone Scar. 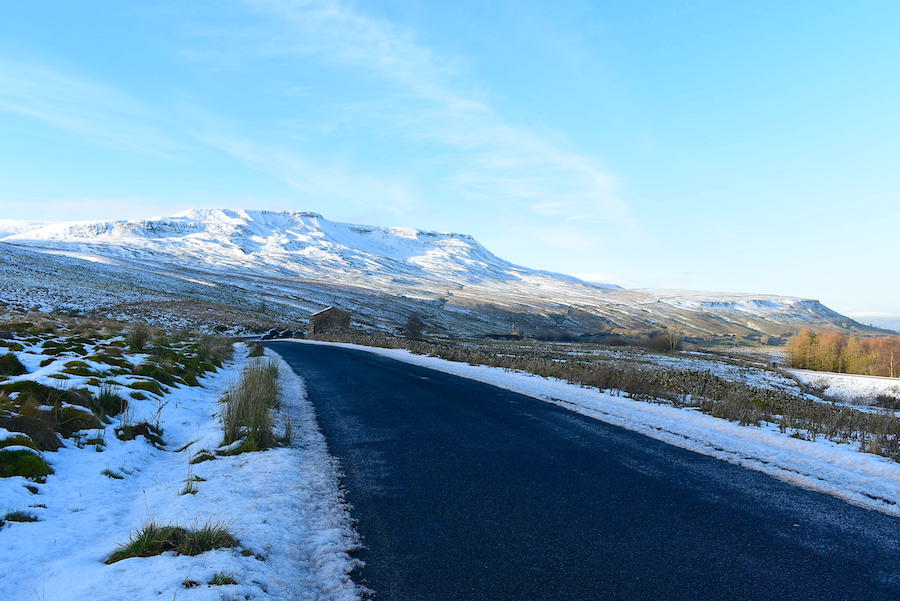 Another look back at Wild Boar Fell ….. 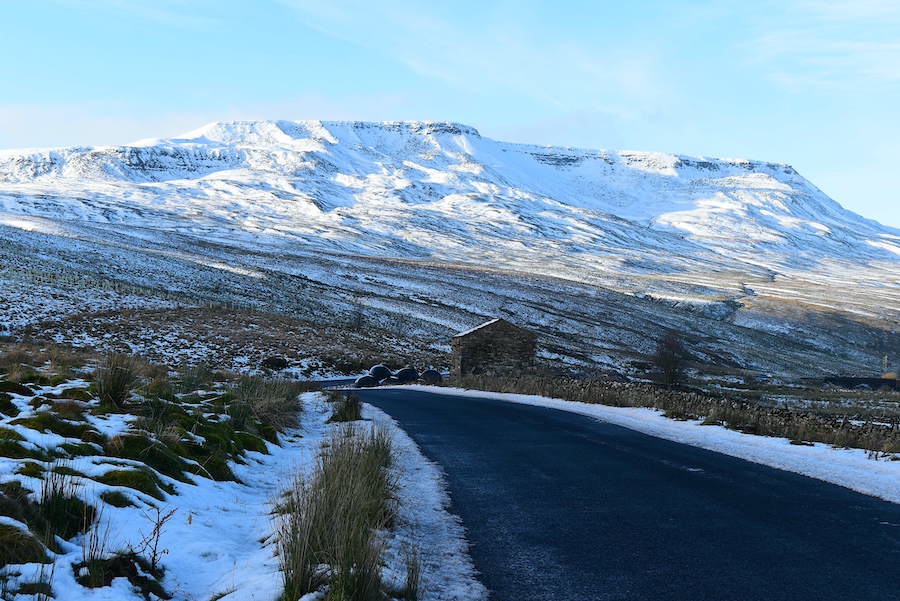 ….. and then a zoom in for a closer look at it. Fabulous. 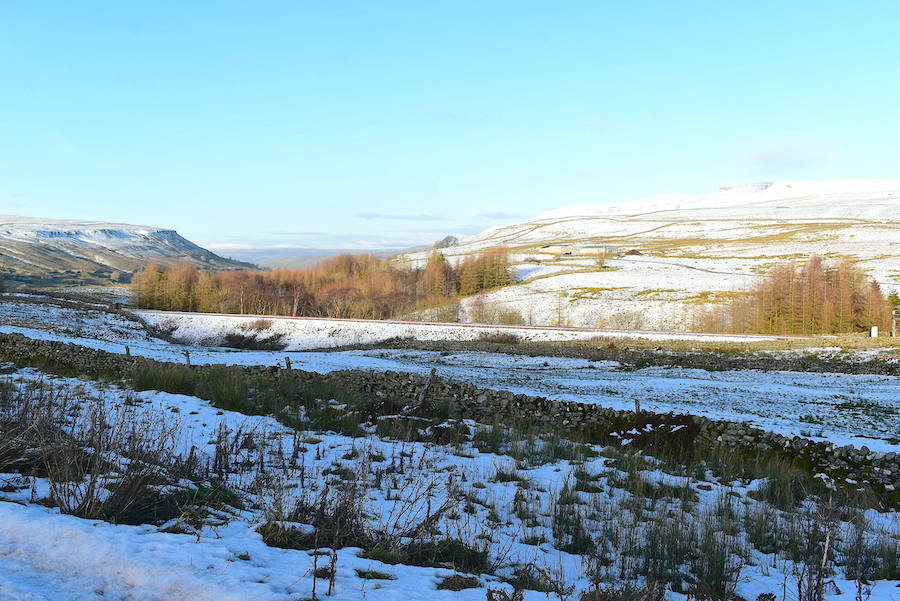 A retrospective view along the Eden Valley. We carry on to the Moorcock Inn where we turn right at the junction to make our way over to Sedbergh. 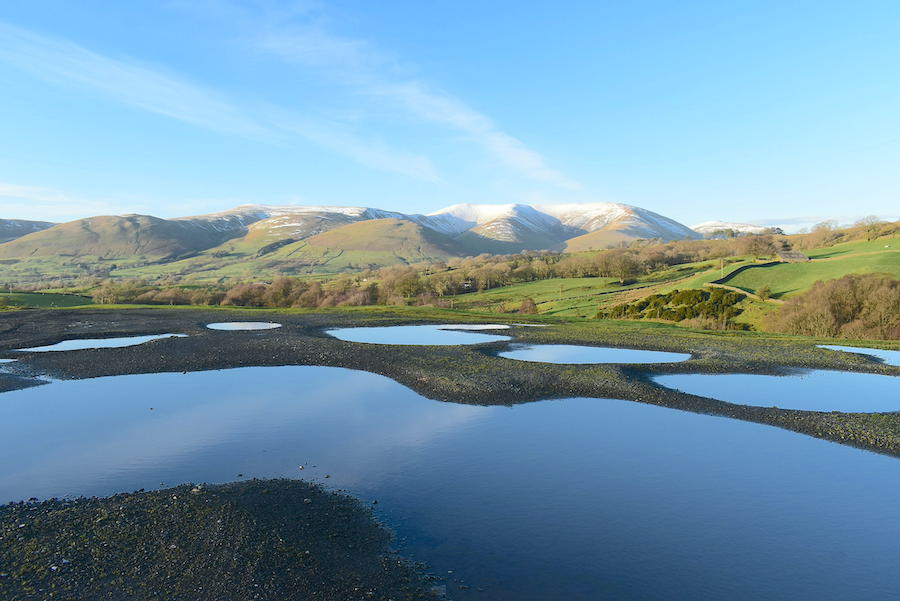 There is a large parking area along the way which is a convenient spot to pull in for a view of the Howgills. We’ve never known this parking area to be puddle free. I took a few more shots from the car park ….. 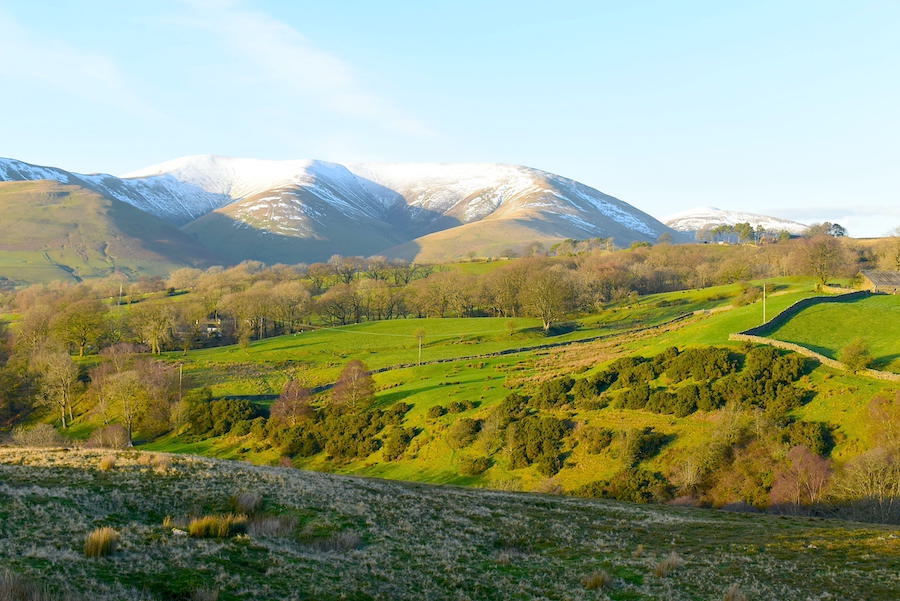 The Howgills big three, The Calf, Bram Rigg and Calders, on the skyline. 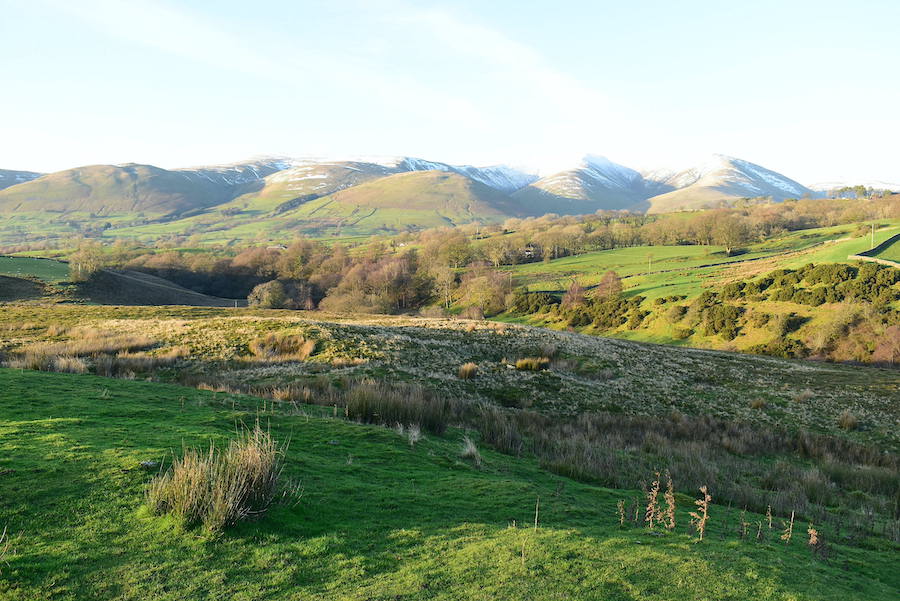 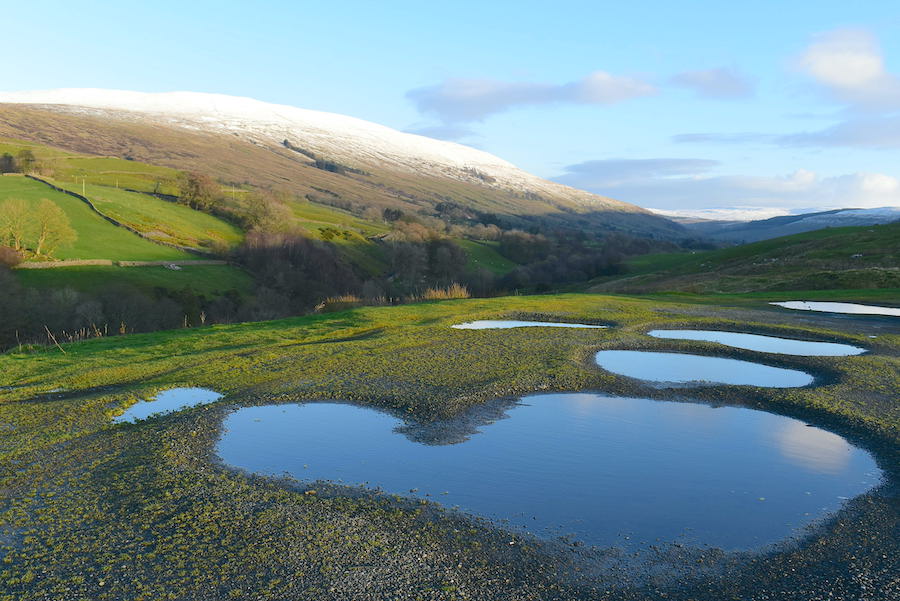 The view south along Garsdale with Baugh Fell on the left. 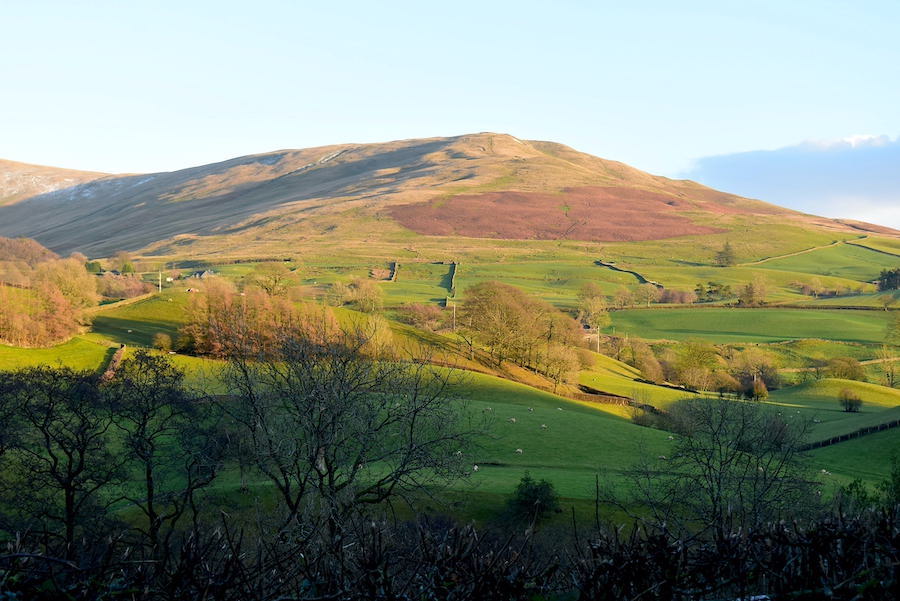 Beyond Sedbergh now and a passing place a little higher up the narrow road provided an opportunity to take a look back at Winder, one of the lower Howgill fells just to the north of Sedbergh. Looks like we’ve reached ‘the golden hour’ as the sun starts to set and gives Winder a lovely glow. 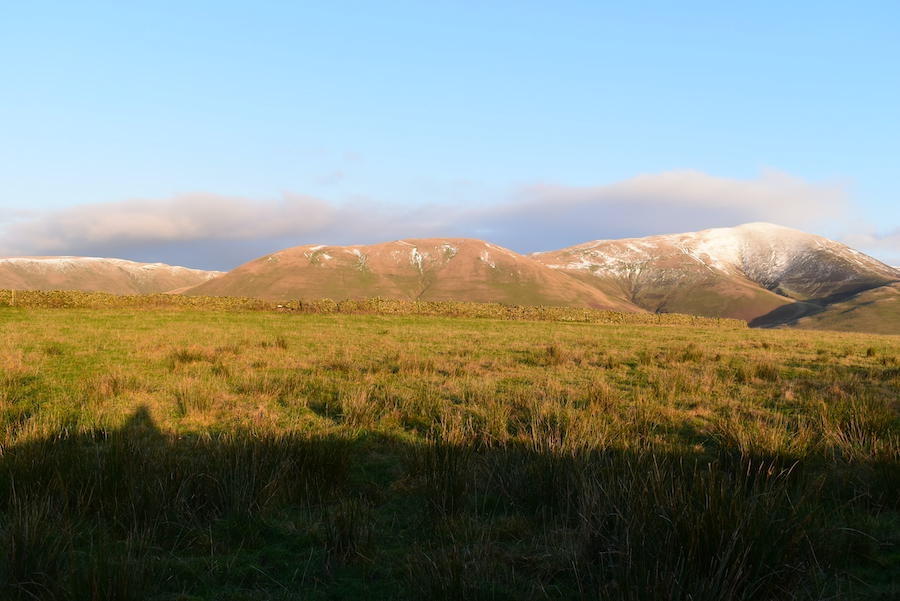 Beyond the viaduct at Lowgill now where clouds are building again behind Linghaw and Fell Head. 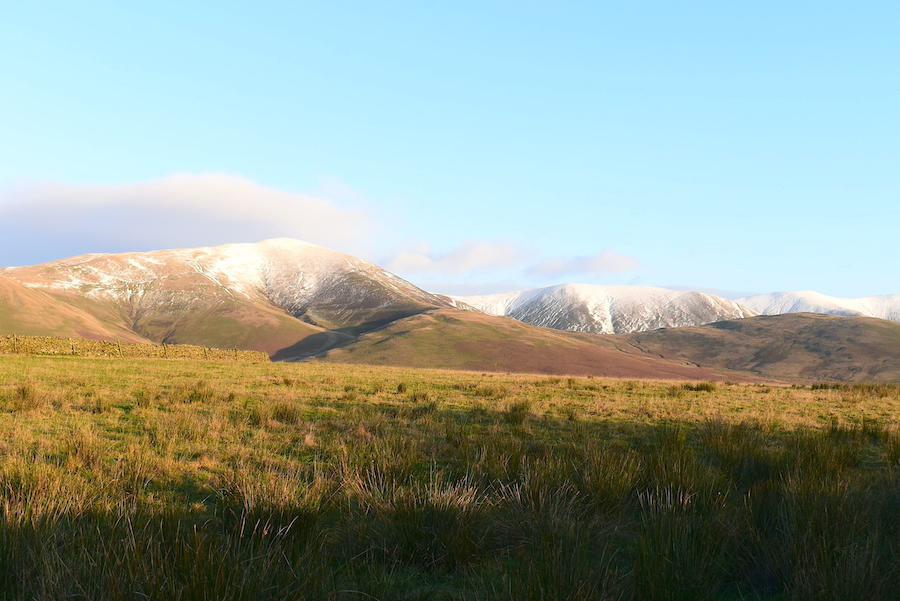 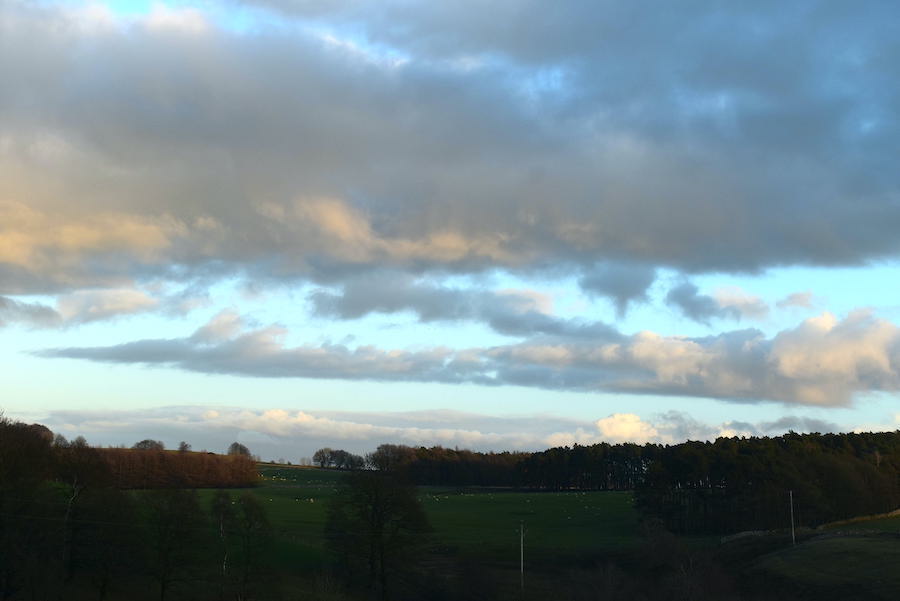 Approaching Orton and the cloud build up continues ….. 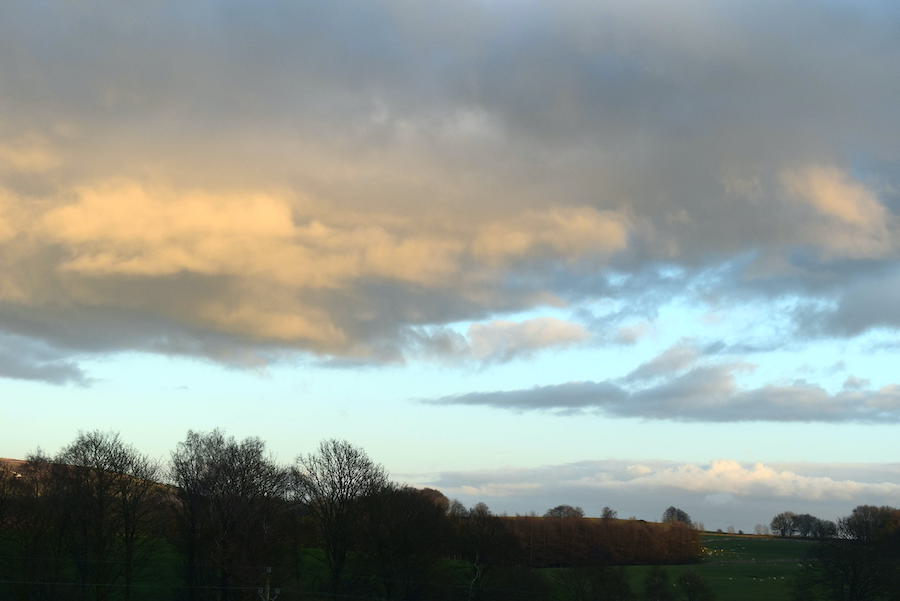 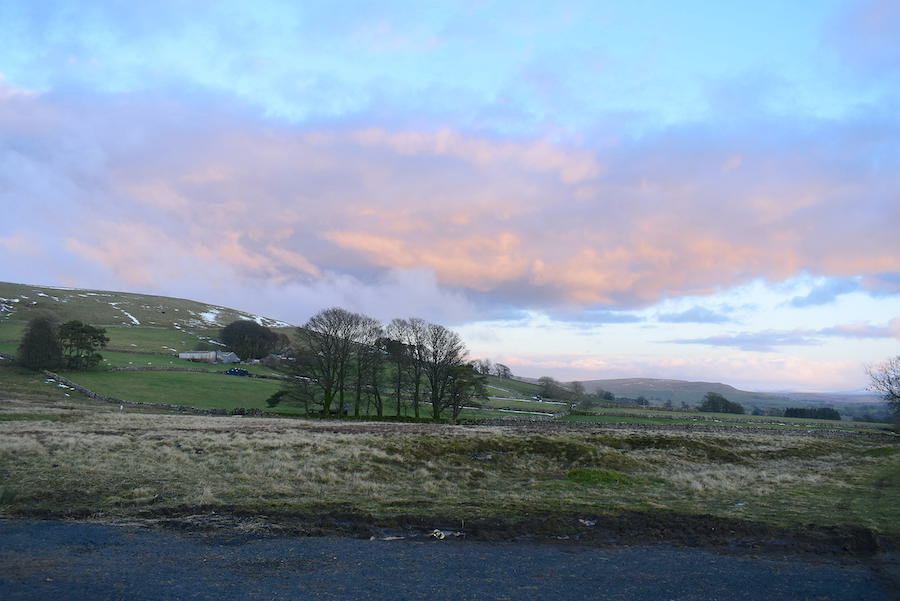 ….. and at the old quarry near Orton the clouds begin to take on a more fiery look. 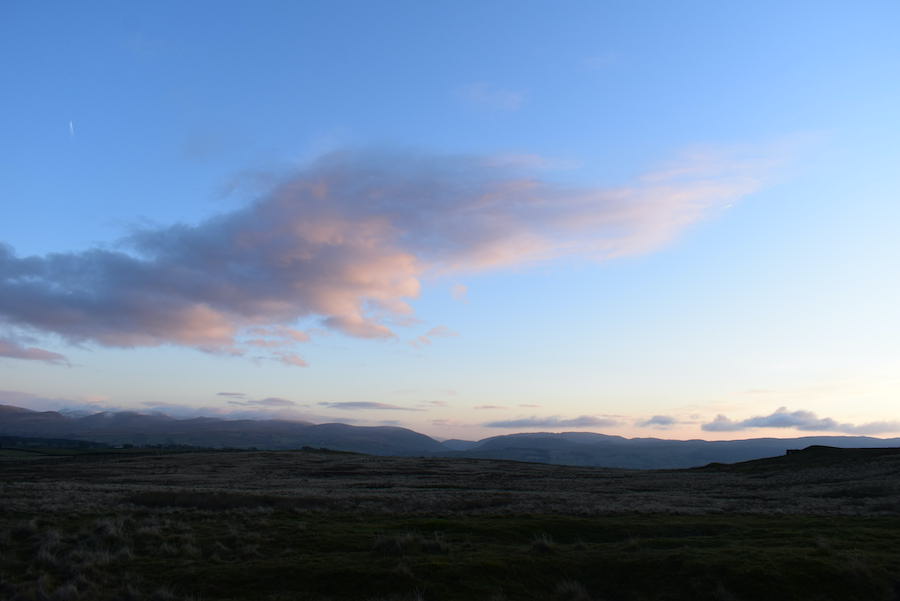 3.25 p.m. The sun is going down and the light is fading rapidly, we begin to entertain hopes of a spectacular sunset as we watch the changing colours of the clouds. 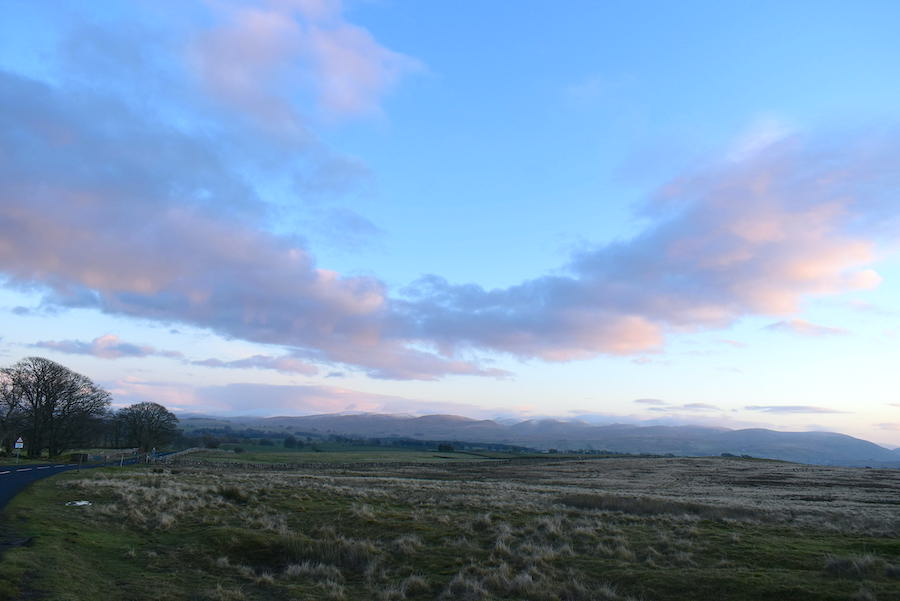 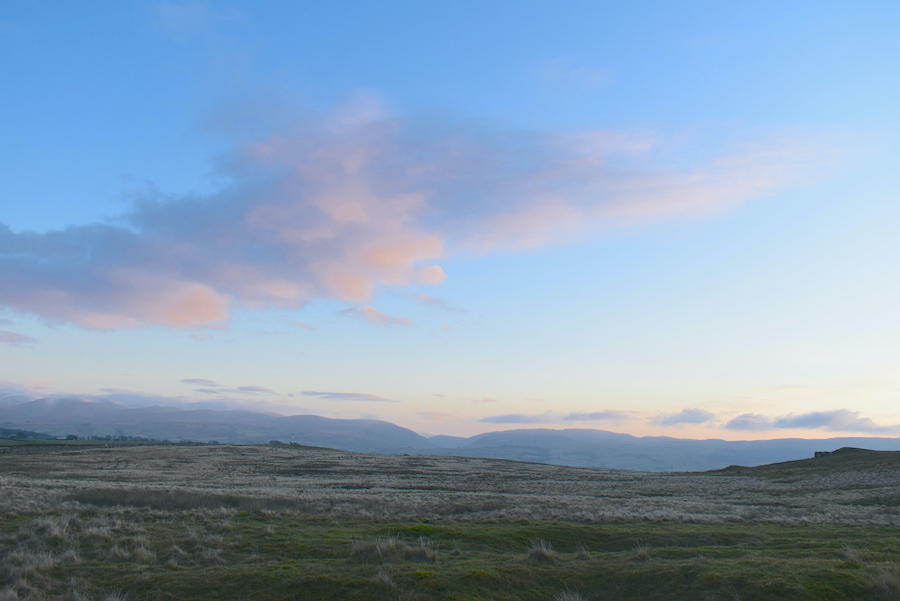 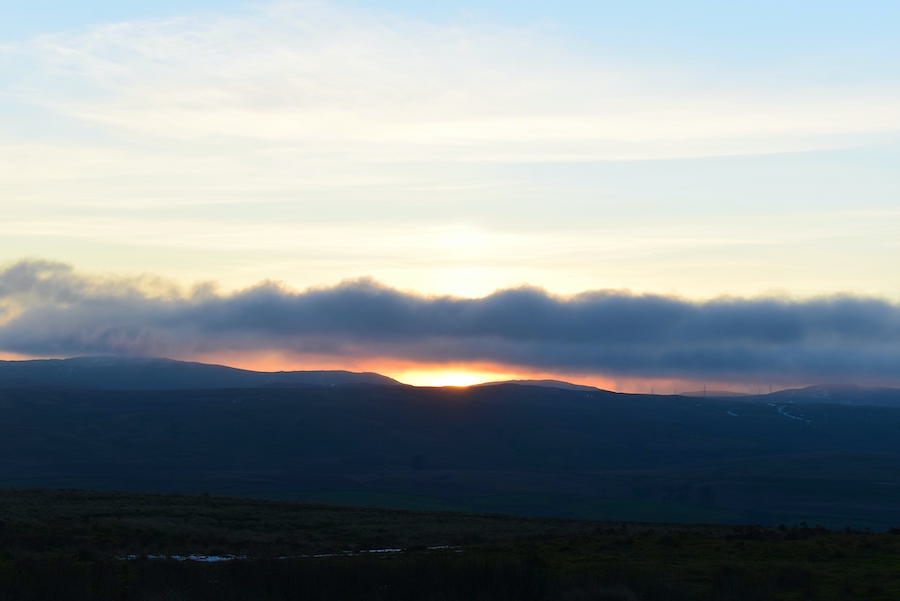 Alas, it wasn’t to be. A thick bank of cloud had developed, and continued to build, over the Lakeland fells which blotted out any hopes we had had of a decent sunset. This was as good as it got. At this point we were about to get back on the A6 at Shap and by the time we got to Shap the sun was nowhere to be seen. When we reached home a short while later it was almost dark. We’ve only been out just over two hours but its already time to turn on the lights, close the curtains and get the kettle on. However, there’s only another sixteen days before we turn the corner and the hours of daylight start to lengthen once again. That’s one thing that will definitely happen during this current atmosphere of uncertainty, so there’s something to look forward to at least.