Rain pelted down all morning but eventually eased off just after 1.00 pm so we spent a couple of hours walking around Lowther Park. A break in the heavy cloud provided a brief spell of sunlight to begin with but it was short-lived and the weather was very dull for the remainder of our walk. As we reached Whale Farm it began to rain so that became our turn around point and we made the return journey using the back lanes rather than plough our way across any more very wet and extremely muddy field paths. I took the camera knowing the light would be poor but thought the photos might show why we haven’t been hitting the fells quite so much recently. Its very tedious to look out every morning to see the same low cloud, dull grey skies and rain pouring down the windows. 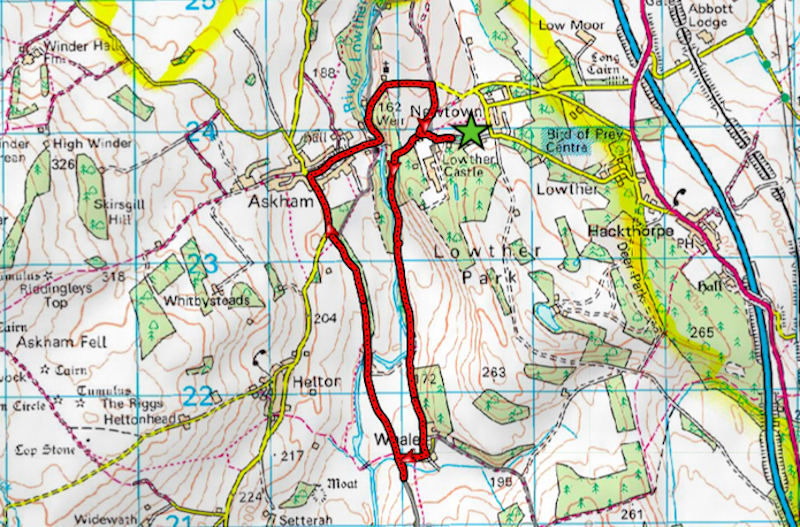 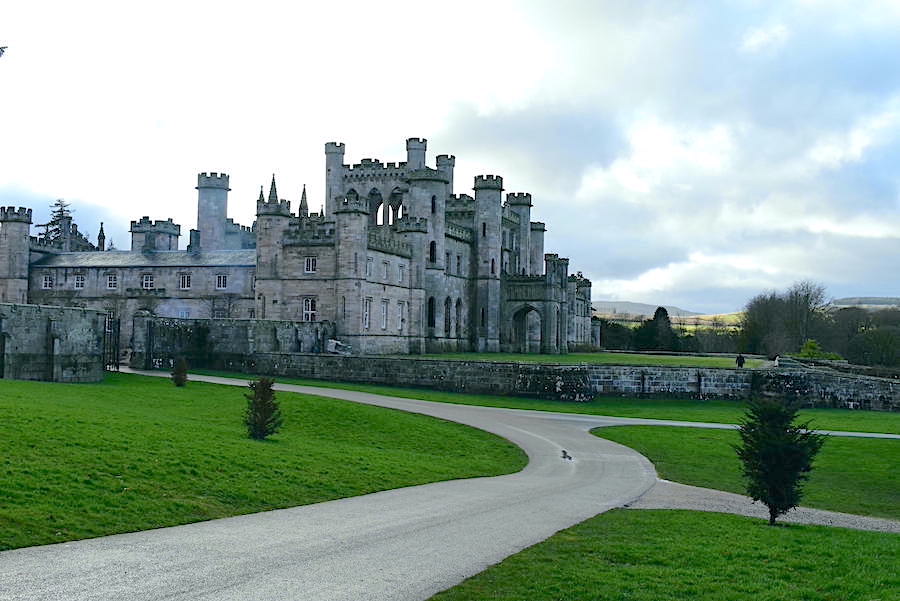 We parked in the car park here at Lowther Castle. The castle isn’t very far from where we live so we only had a short drive to get here. There are lots of paths and walks in the grounds of the castle so its a popular place for local residents and despite the poor weather there were plenty of cars in the car park and lots of folk just taking advantage of the break in the weather. 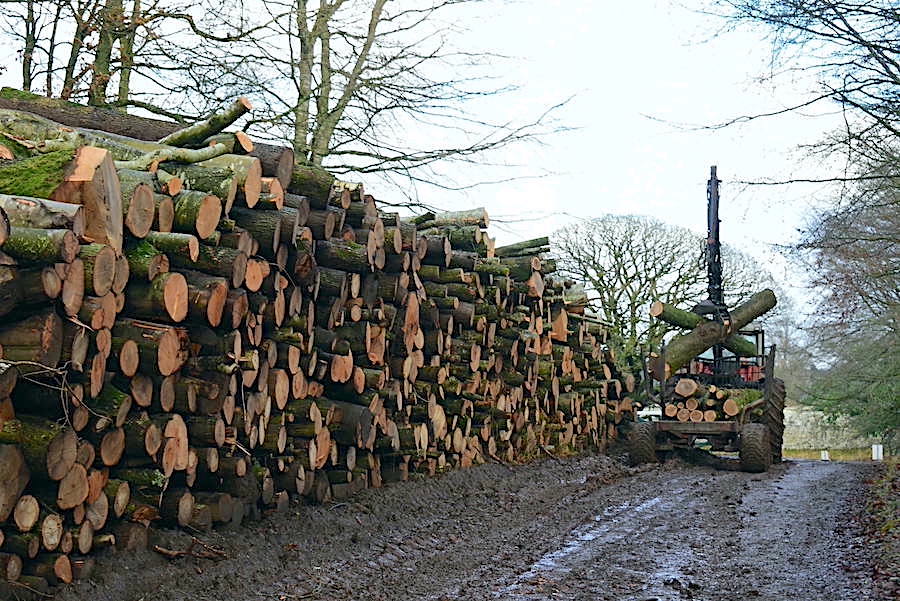 We pass around the front of the house and pick up one of the claggy trails where a workman was busy stacking logs to one side of it. He was having a bit of trouble with these two logs as they slipped and wobbled in the grabber. 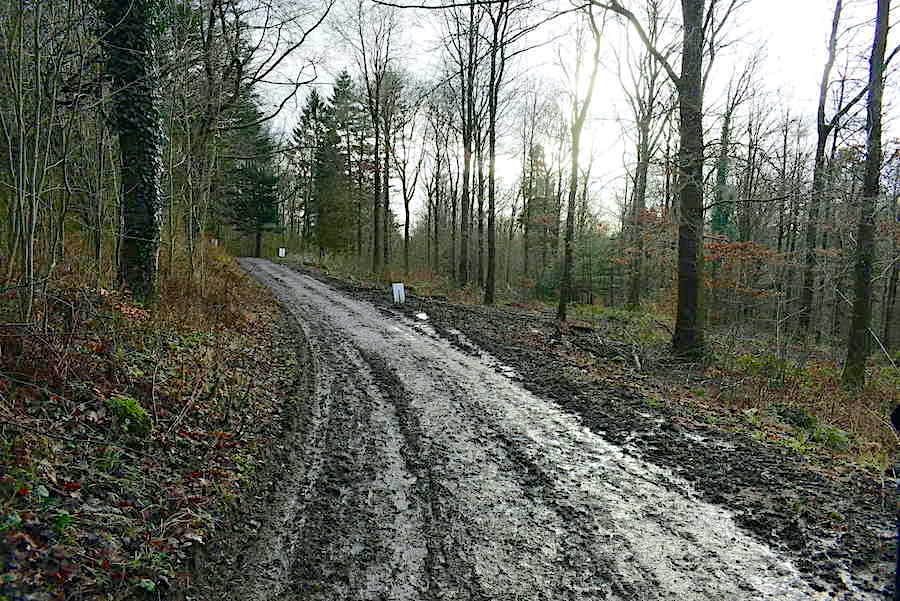 Further along the track and into the woodland above the river Lowther – claggy mud everywhere. 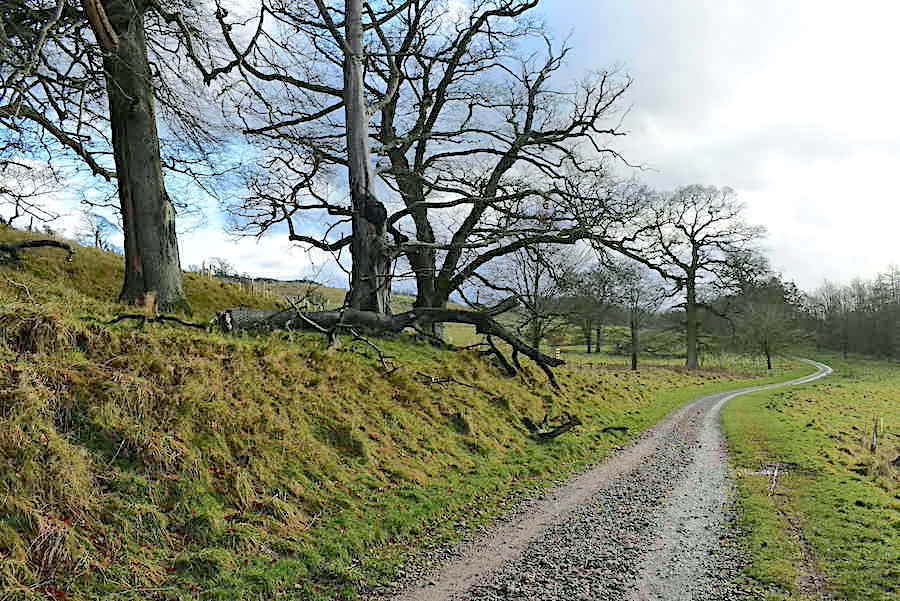 Out of the woodland now and walking through the open parkland so the paths were somewhat drier and more pleasant to walk along. 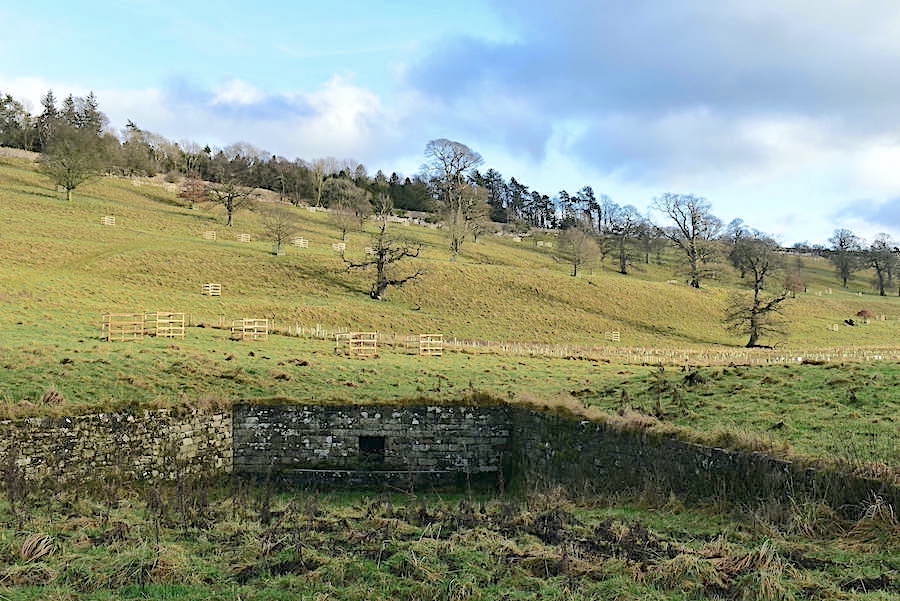 We’ve no idea what purpose this structure served although we’ve formulated various theories over the years, and probably none of them were accurate either. 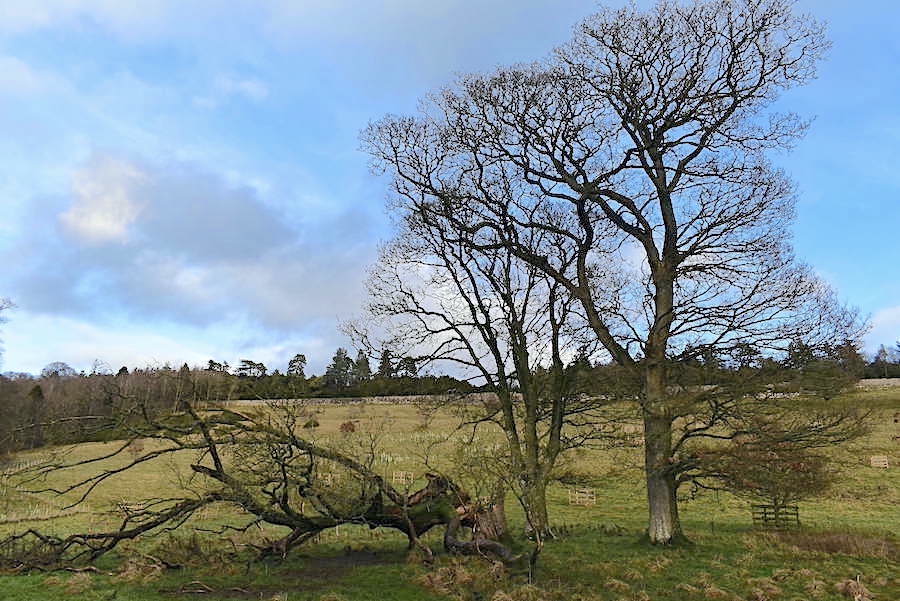 A wintry scene with a backdrop of blue sky helping to show off the silhouettes of the bare trees. 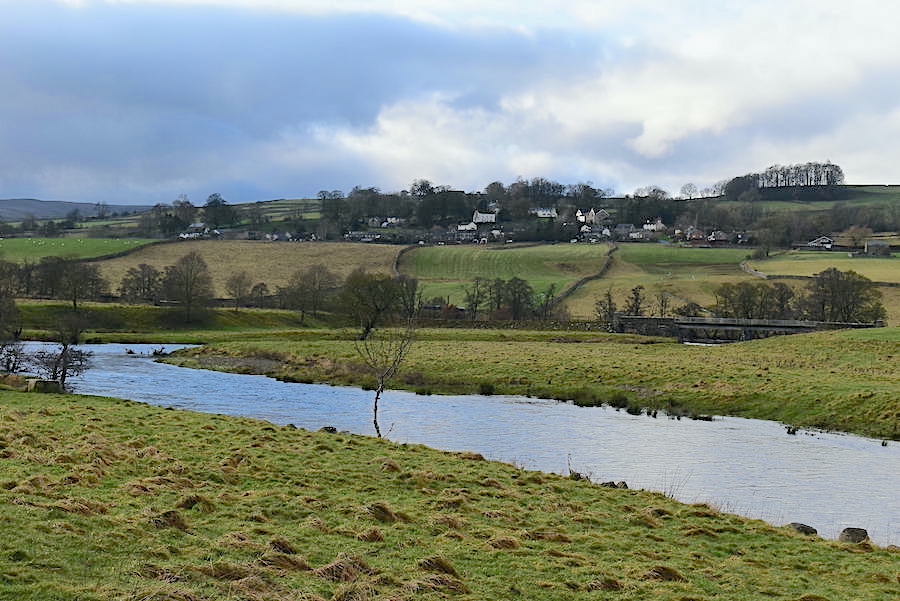 The path eventually runs close by the river from where there is this view of the little village of Helton. Around this point there is a path junction, the right hand path curves around a bend in the river eventually leads to the road we’ll be walking back on. The road bridge can be seen on the right of the shot. We take the left hand path at the junction, very, very muddy and more of a quagmire than a path, and carry on to Whale Farm. 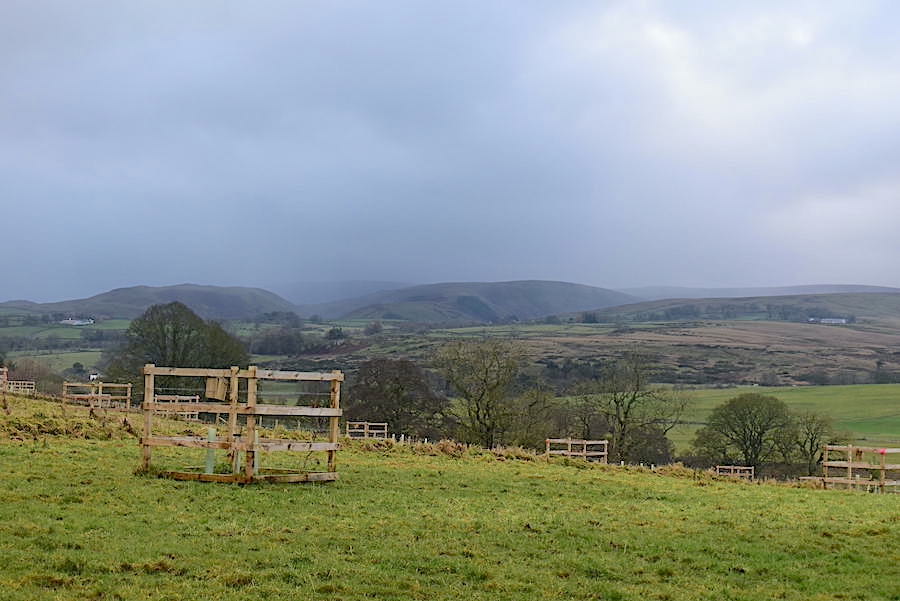 From Whale Farm we dropped down to the road from where I took a look over at the fells around Mardale. The MWIS forecast of 30% chance of cloud free summits seemed rather optimistic ….. 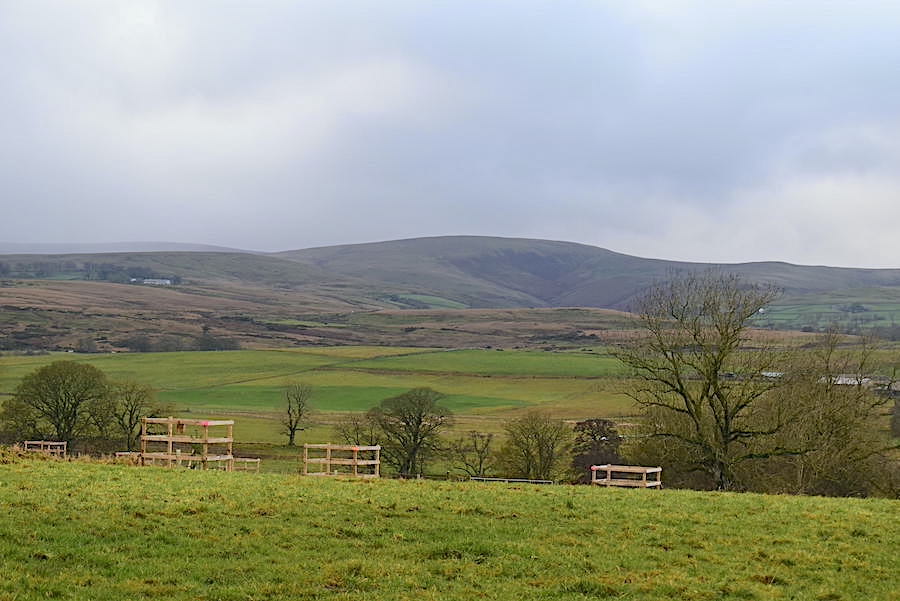 ….. although Loadpot Hill was cloud free for the time being. 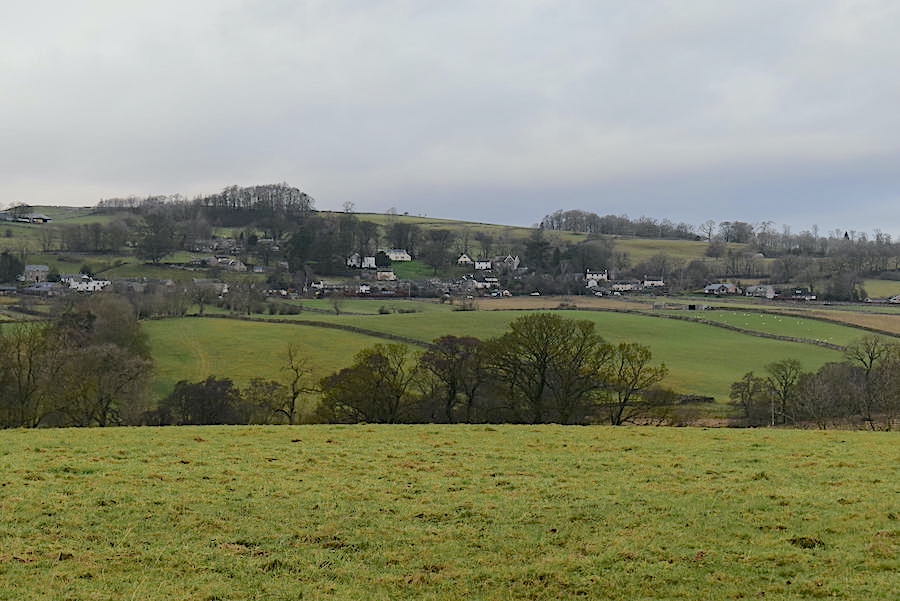 Helton village as we walk along the back lane to Askham. 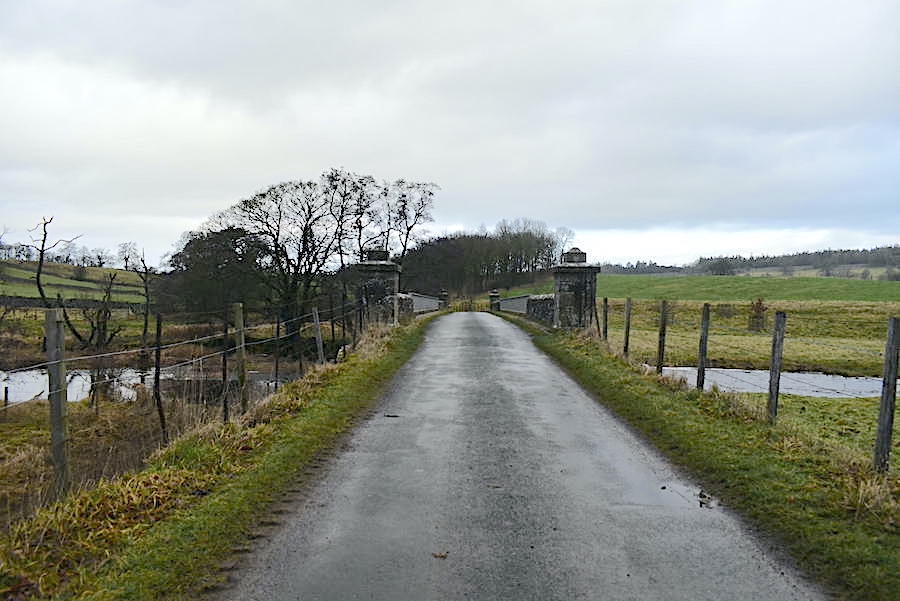 Approaching the bridge across the river Lowther. 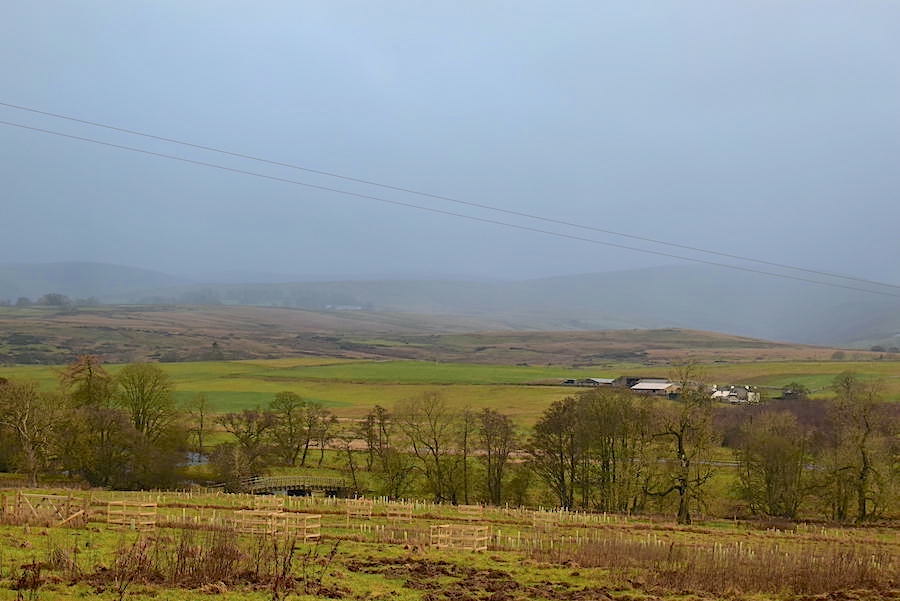 A look back at the Mardale fells although by now they are barely visible. There is little point in us visiting the fells when the cloud is down, since we do want to have some views to put up on the website. There’s quite enough gloom around as things stand, given the current situation. 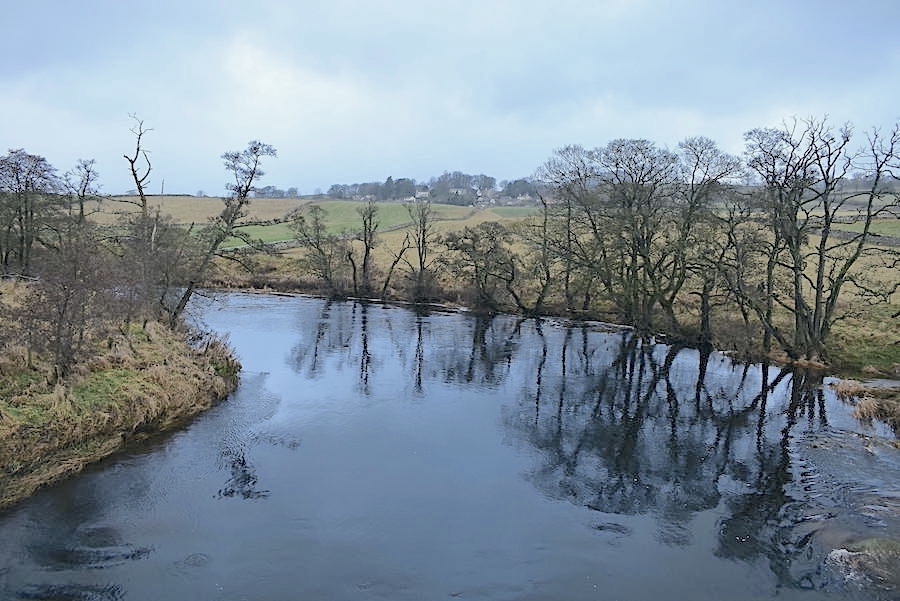 The view upstream from the bridge ….. 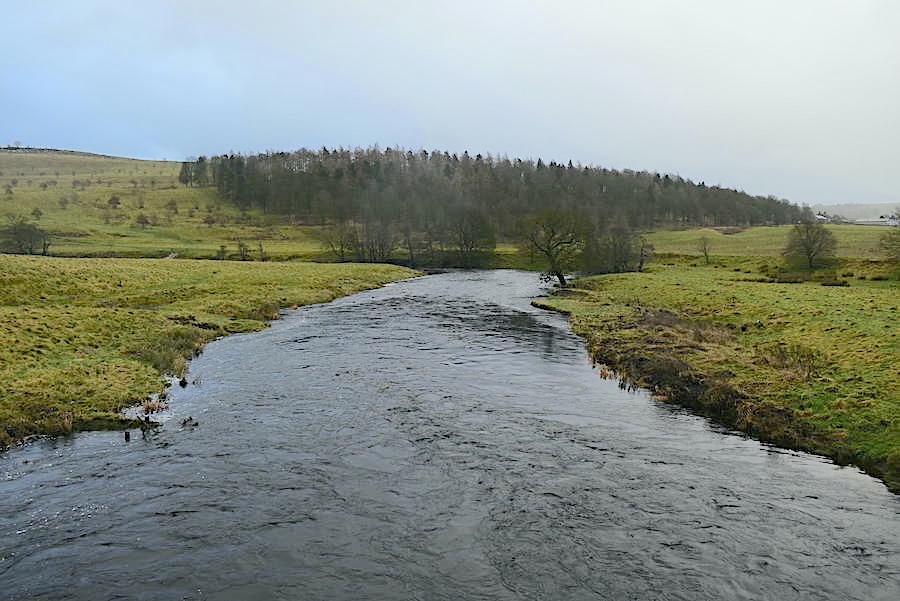 ….. and the view downstream. The river isn’t normally this full. 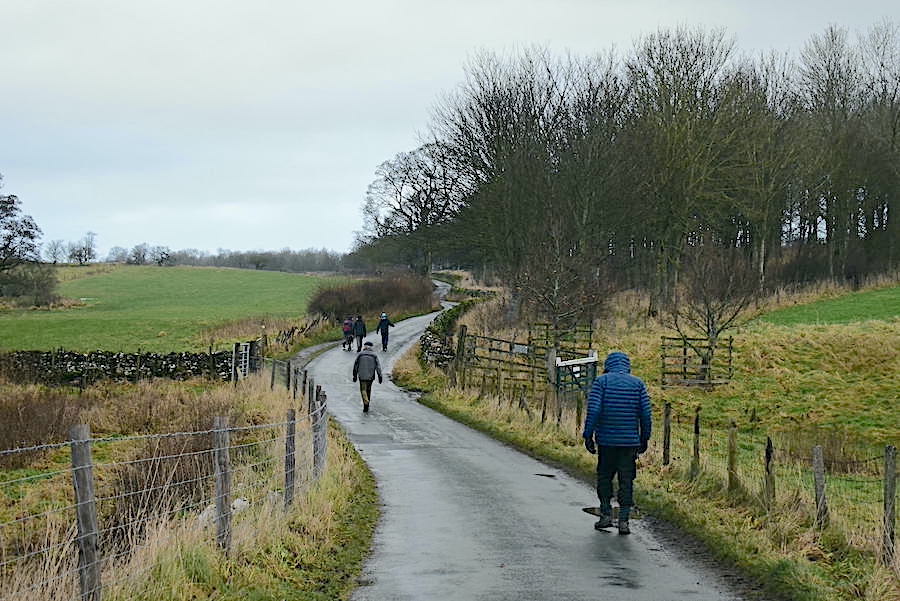 We are not alone. The group of three reached the lane via a field path and the solo chap reached it via the right hand path from the junction I mentioned earlier and passed us as I was taking the shots from the bridge. Further along the lane ….. 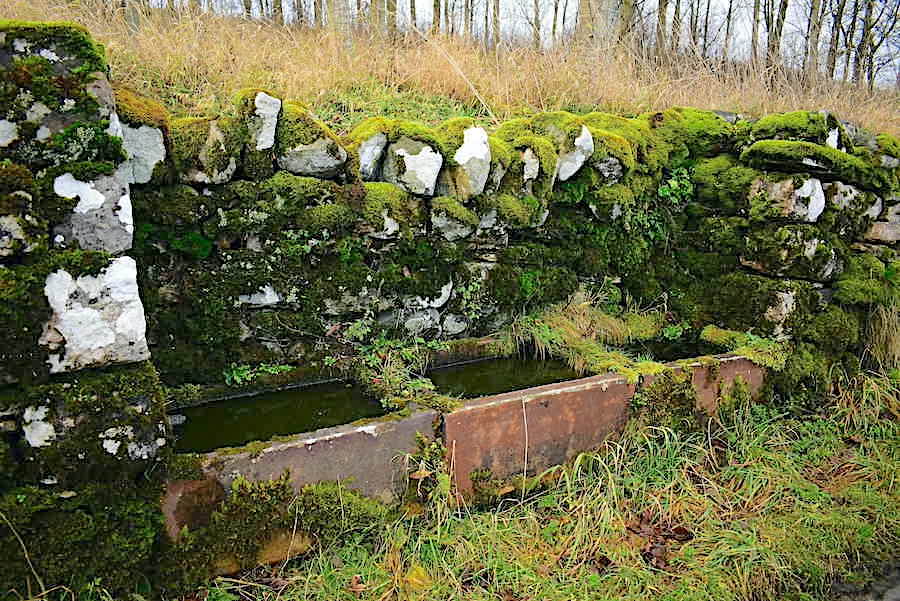 ….. we come to this old watering trough. There was one of these in the Yorkshire village where I was born. They were mostly used to give horses a drink as they pulled their carts and carriages along country lanes, but they would also have been used by livestock during a cattle or sheep drove. Nice to see that some of them still exist. 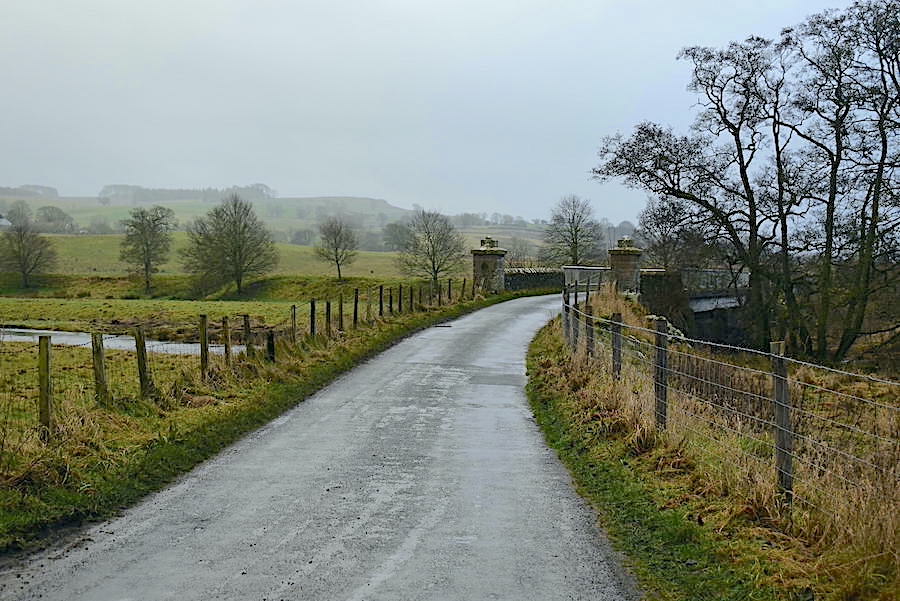 A look back at the bridge as we walk back in the rain. 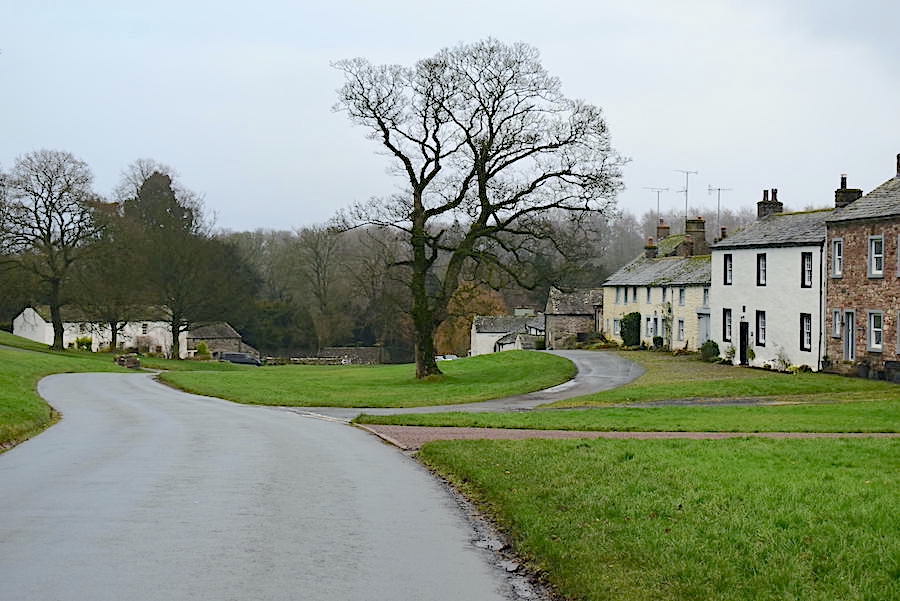 Walking through the pretty village of Askham ….. 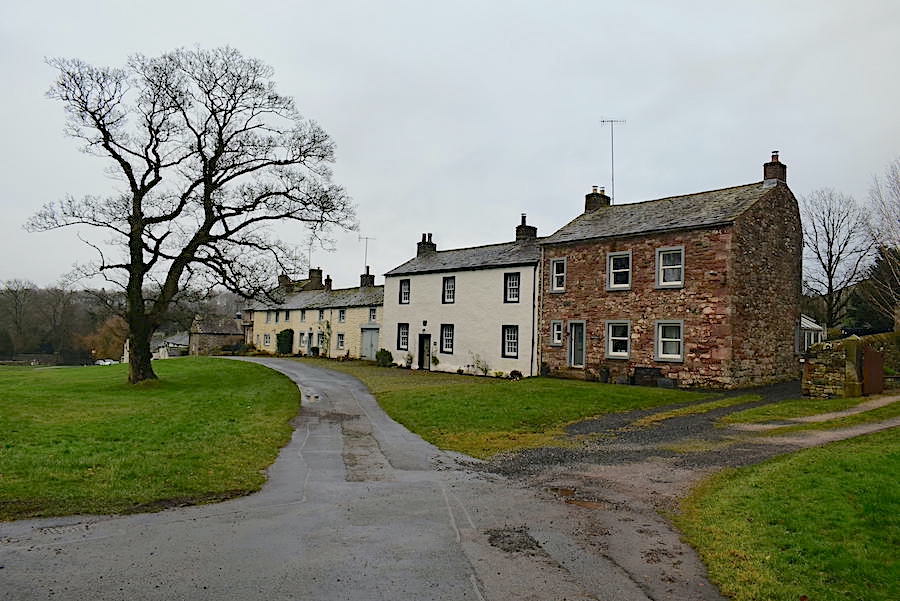 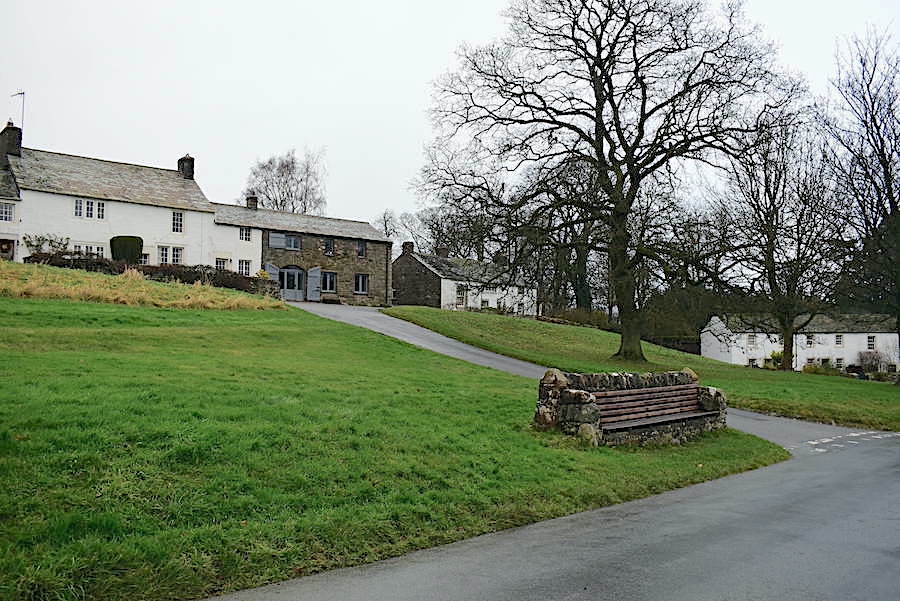 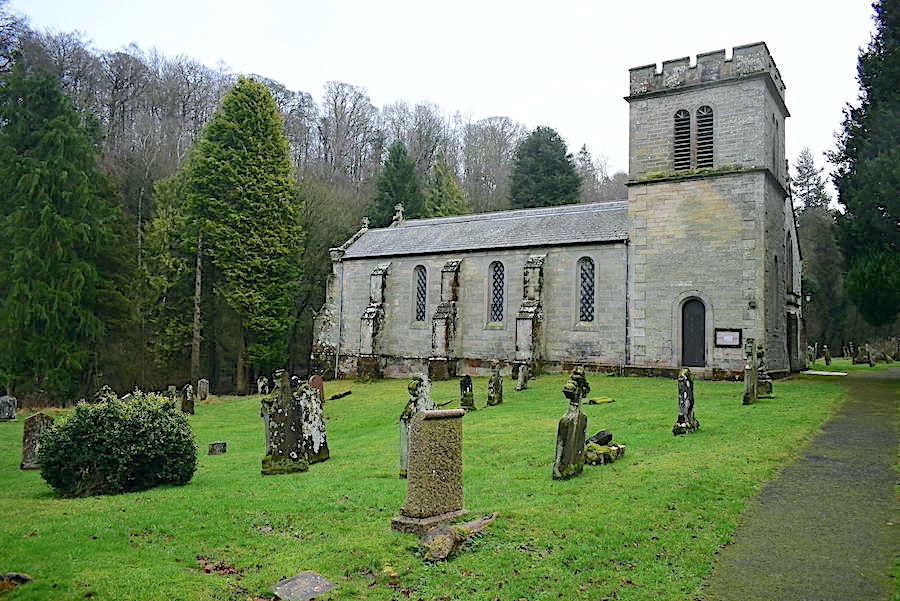 ….. and at the bottom of the village is the church of St Peter. Now a Grade ll listed building it was designed by the same architect who was simultaneously working on the design for Lowther Castle. The present building dates from 1832 although a church, dedicated at the time to St Kentigern, has existed on the site since 1240. 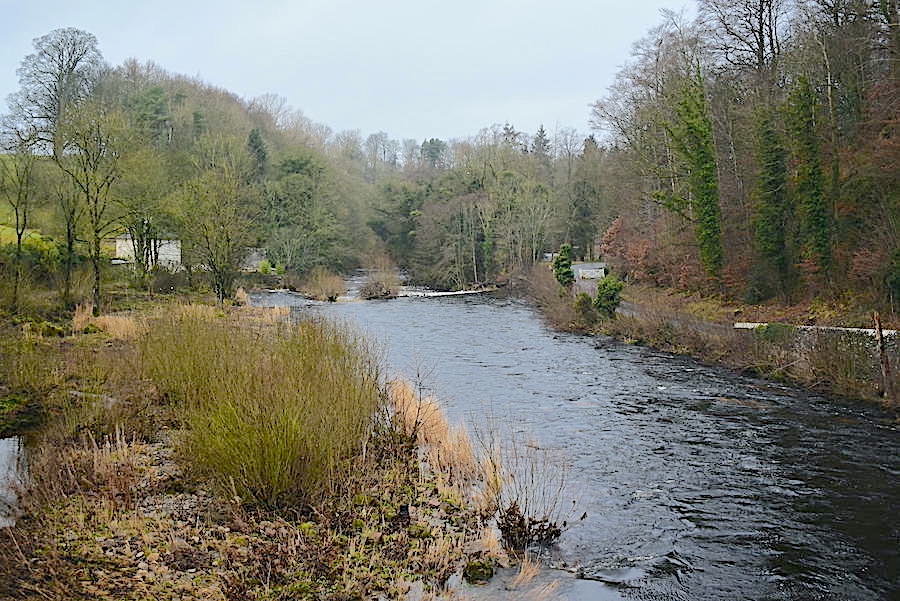 Just below the church we cross the river Lowther once again, normally the stony river bed is on view ….. 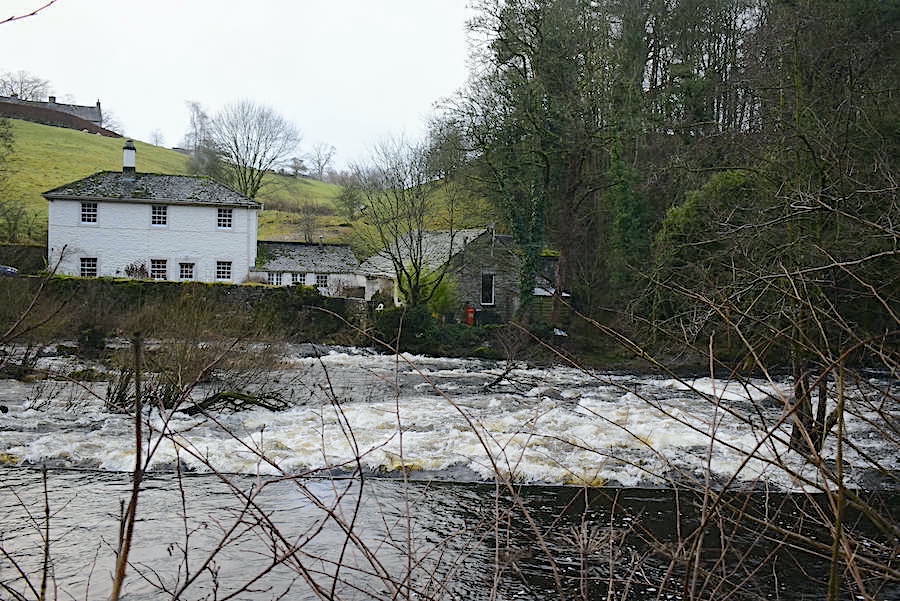 ….. conditions are different at the moment with water pounding over the weir and ….. 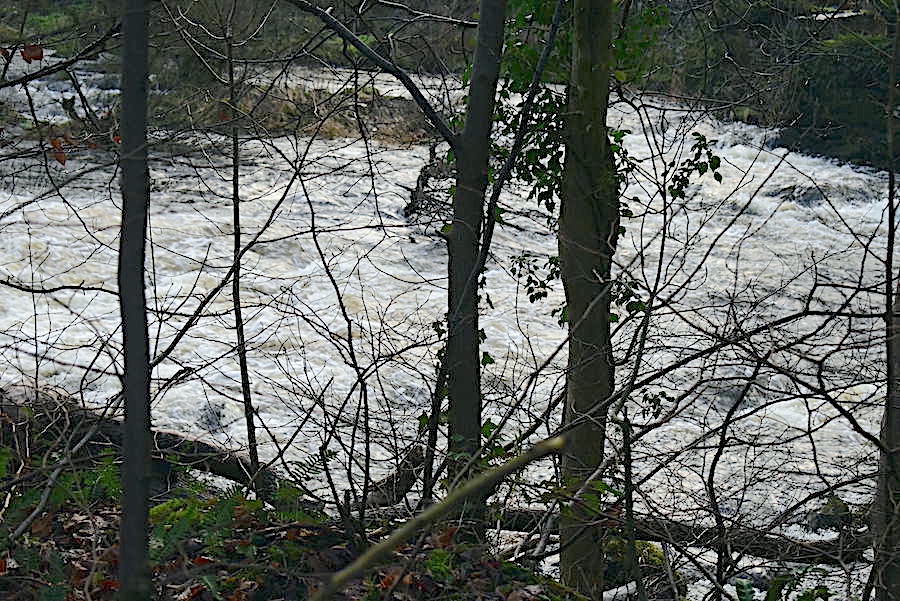 ….. an almighty turbulence taking place just beyond it. I can’t recall seeing it as full as this since Storm Desmond in December 2015. 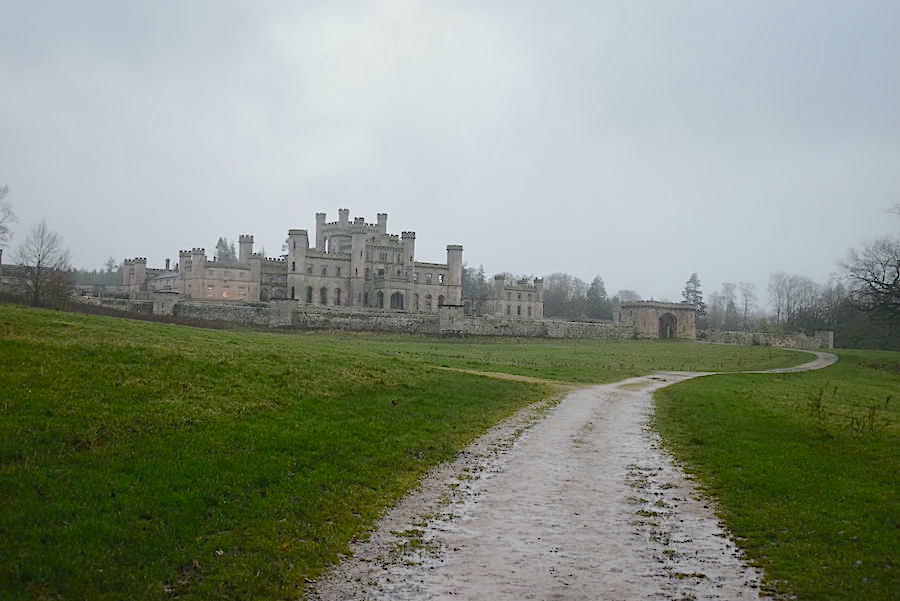 Back at Lowther Castle on a very wet and gloomy afternoon. That’s it for today then, there’s just a short walk back up to the car park over towards the left and then a short drive back home to dry out and have a cuppa. Maybe things will pick up a little next week.