Stormy weather has been the norm for a while lately with overcast and leaden skies, strong winds and heavy rain keeping us indoors for the most part. Today’s forecast was something of a mixed bag and the forecasting sites seemed unable to offer a consistent outlook, however they did all seem to suggest that it would be a dry day so that was good enough for us. As most of the forecasts mentioned that it was likely to be blustery at height we opted for doing a circuit of Derwentwater. No blustery wind to deal with, a long enough walk to give the legs a good workout and a walk we hadn’t done since 2018. The weather turned out to be one of those mild and sunny autumn days with not a breath of wind, at valley level anyway, and it was lovely to be out and enjoying some sunshine again. Of course the constant rain of the past couple of weeks has been needed but today it created quite a few problems for anyone walking around Derwentwater. 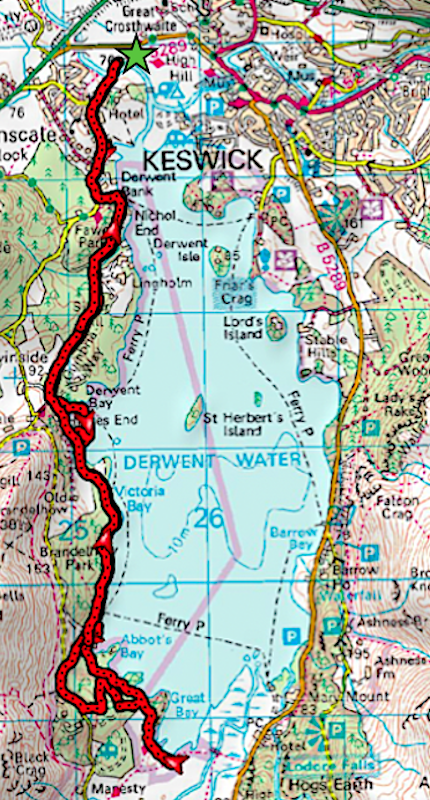 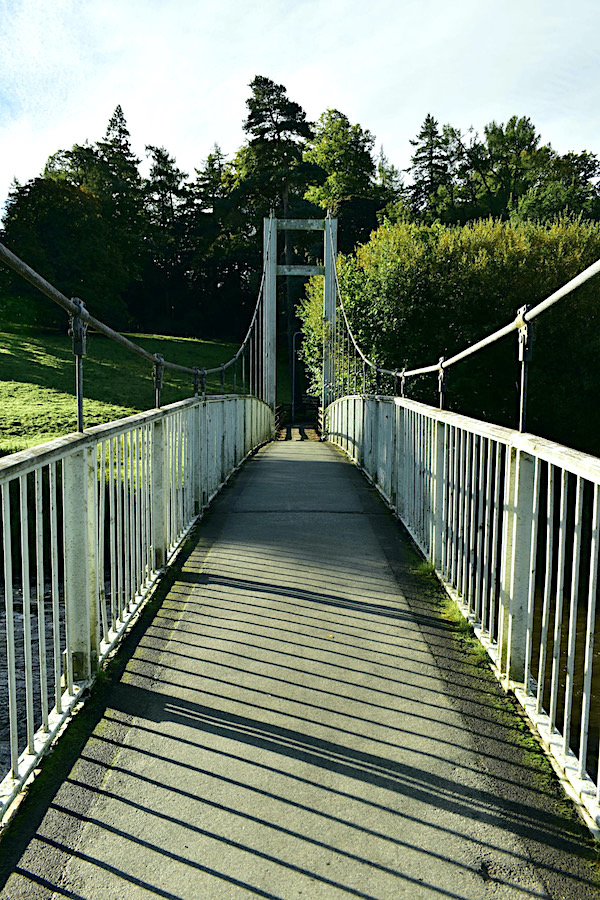 From the parking lane we start our walk with a crossing of the suspension bridge over the River Derwent. 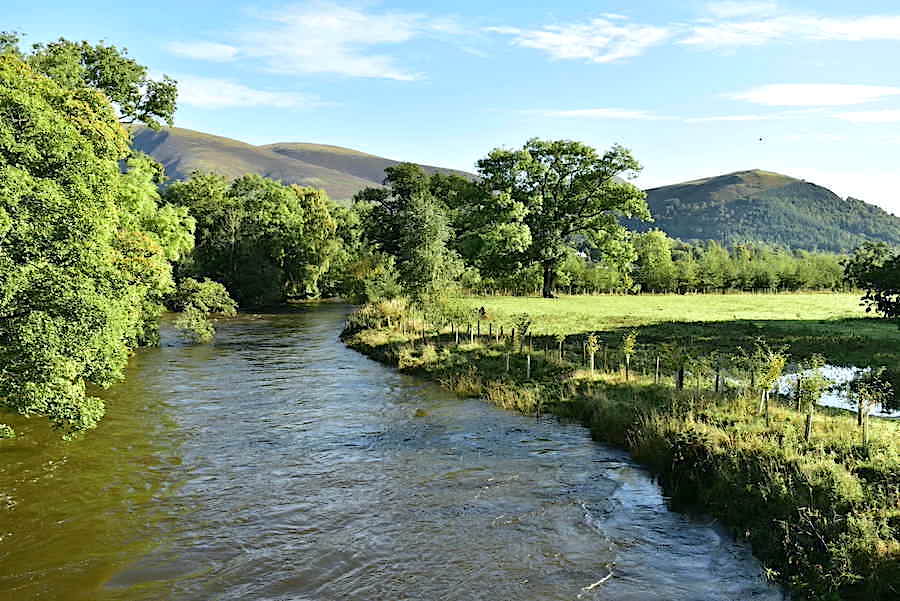 View down to the swollen and fast flowing river from the bridge. 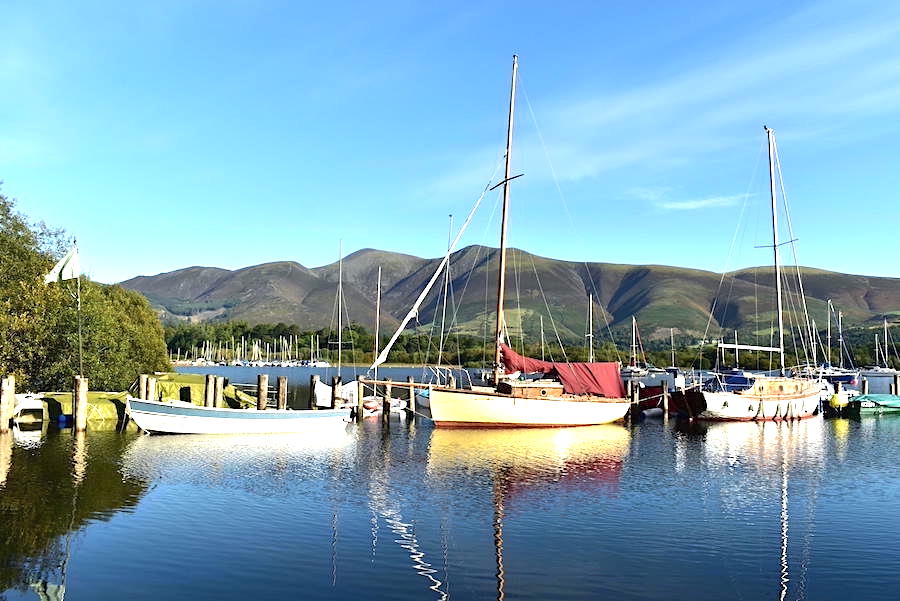 The Nichol End Marina was very quiet, the only sound came from the gentle tinkling of metal against metal from the occasional movement of the boats. From here we carried on through Fawe Park and Lingholm, a heavily wooded section and quite dark  so I didn’t take any shots as we walked through. 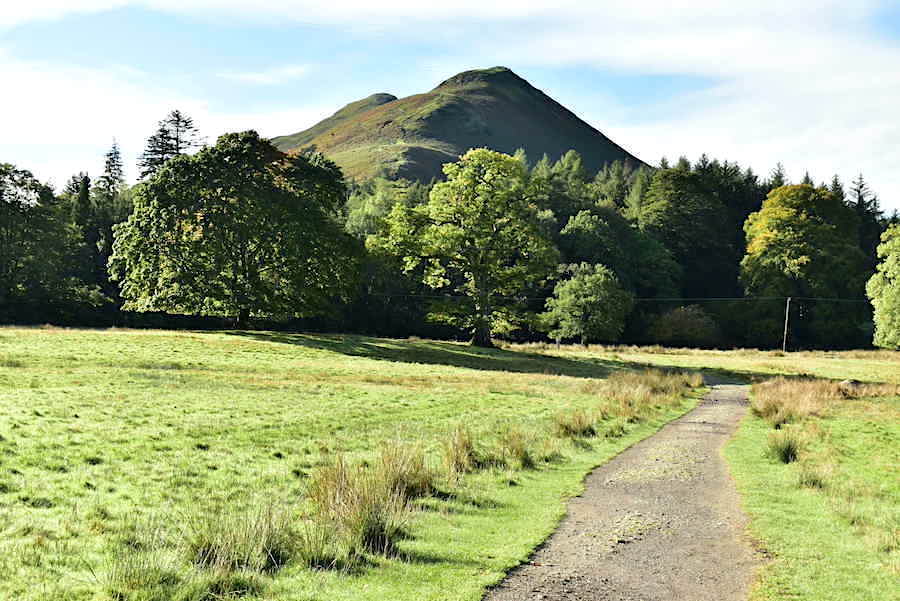 Out of the heavily wooded section now and leaving Fawe Park behind as we follow the Cumbria Way route across this open area known as The Park. Catbells is directly ahead of us. 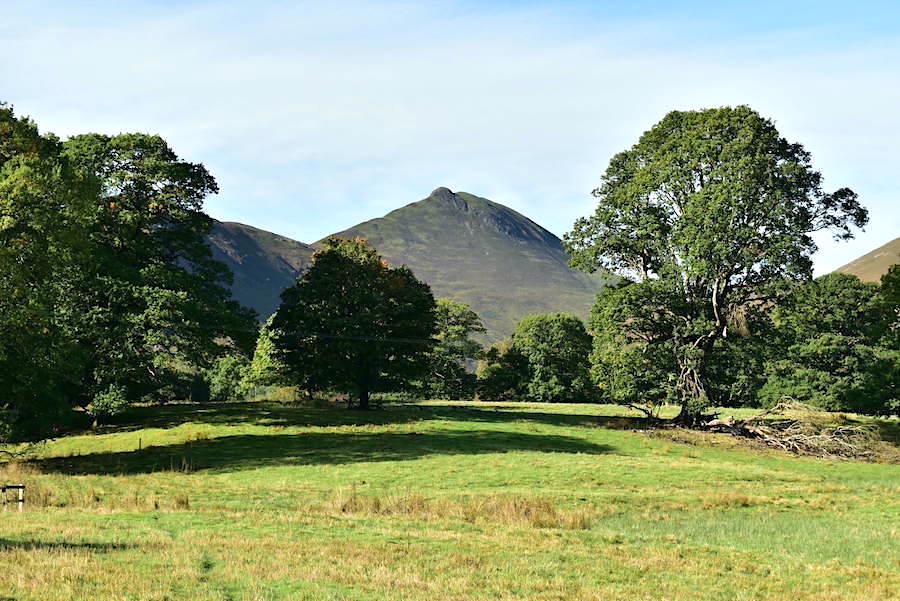 To our right is Causey Pike although its a completely different view from the knobbly one which is the most familiar aspect of it. 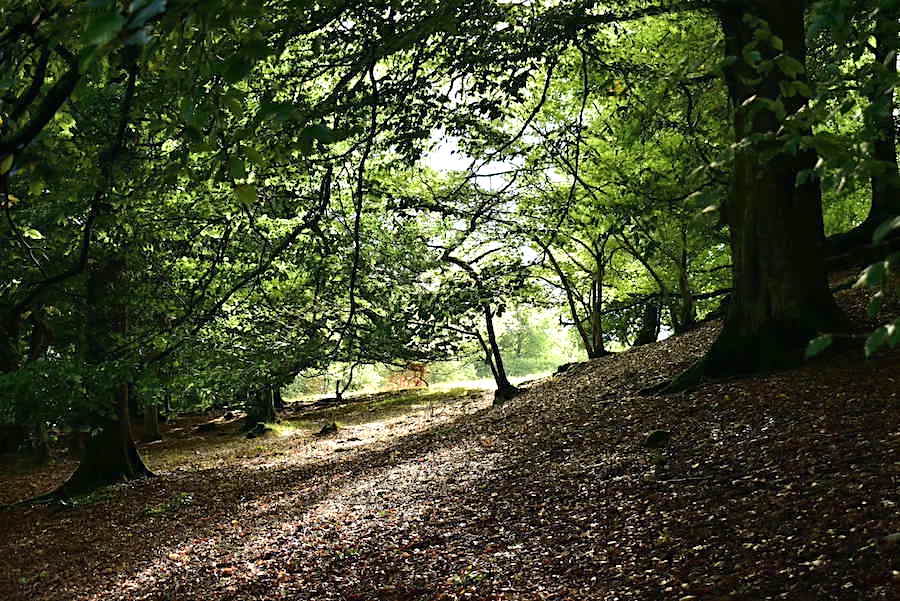 We enter woodland again as we drop down and head for the Hawes End landing stage. A distant clearing allowed a little sunlight through otherwise I wouldn’t have bothered taking a shot. Despite the leaf litter on the ground the trees haven’t yet started their leaf fall in earnest. 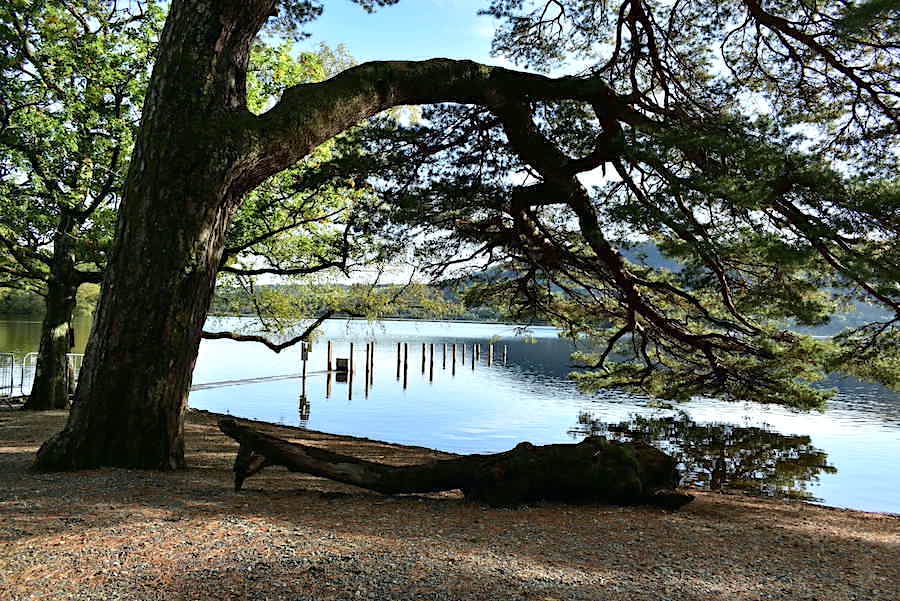 The Hawes End landing stage, impossible to use at present as the water level is very high. 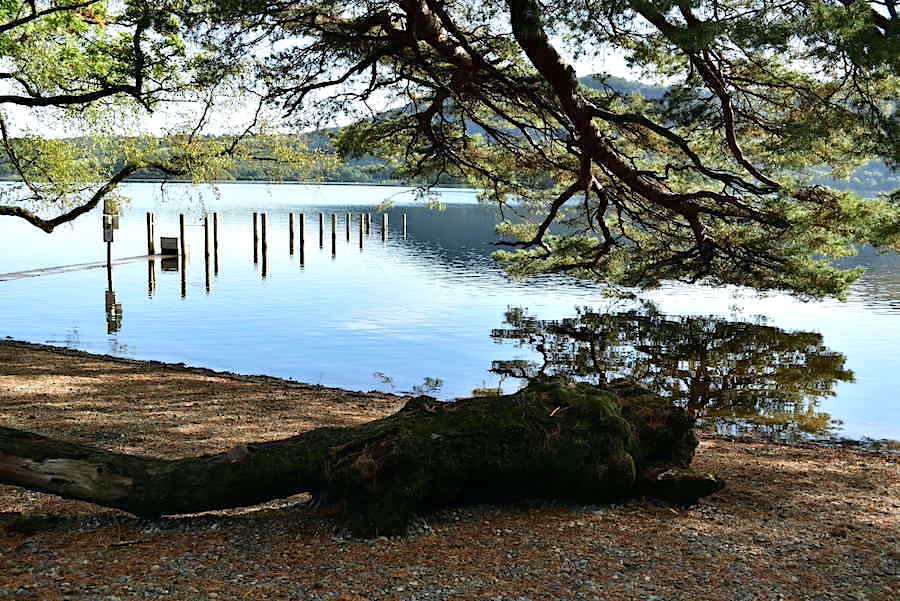 A closer look at the non-existent jetty. Our last walk around Derwentwater was 12th December 2018 and on that occasion this jetty had been completely demolished by an October storm. I’m not sure but I don’t think we’ve ever seen it in full working order. 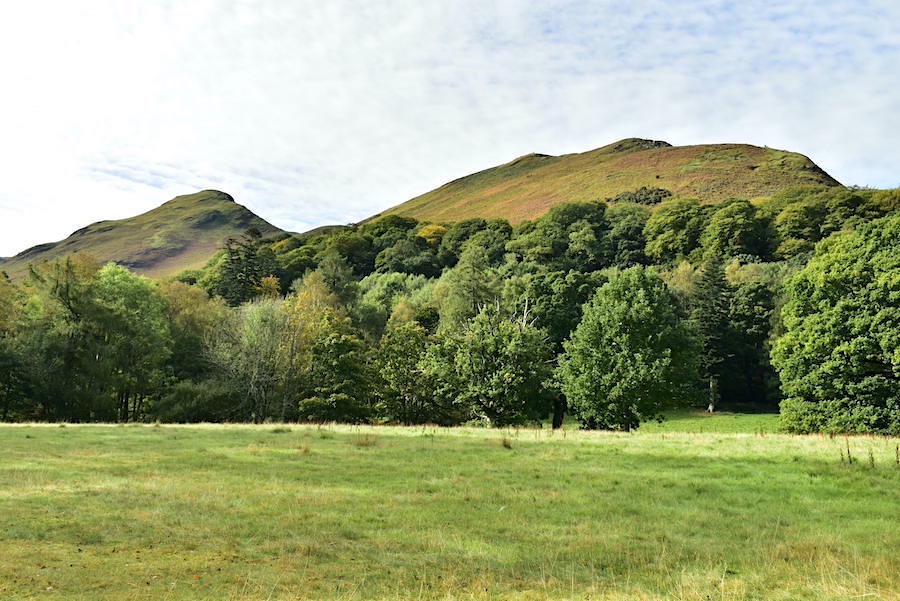 The shoreline path from Hawes End was flooded so we returned to the main path a short distance away. The open parkland gave us another view of Catbells.

Blencathra in the distance beyond Derwentwater. 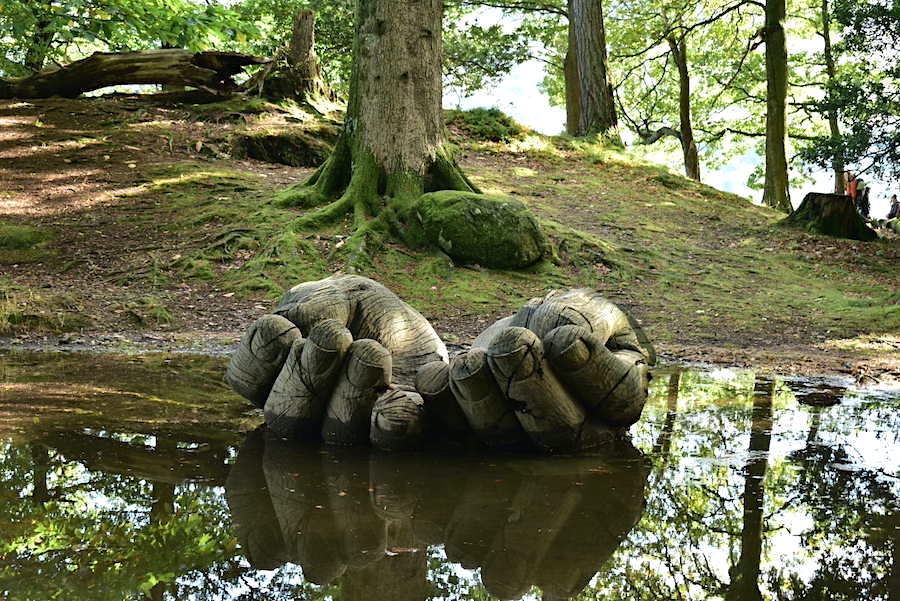 The hands sculpture, now completely surrounded by water, has turned into an unusual ‘island’ feature. 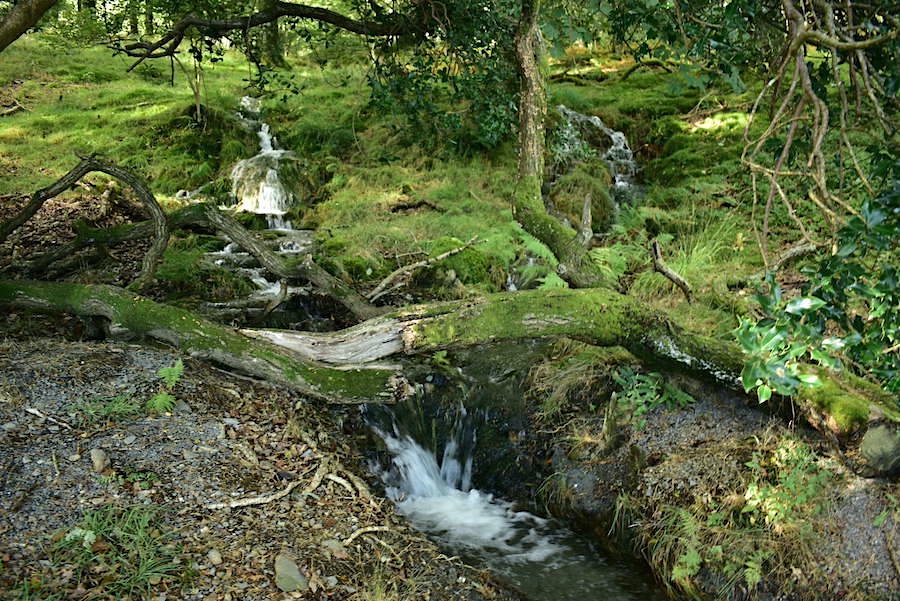 Every rivulet, beck, and stream along the route was in full flow, each one adding its own contribution to an already overflowing Derwentwater. 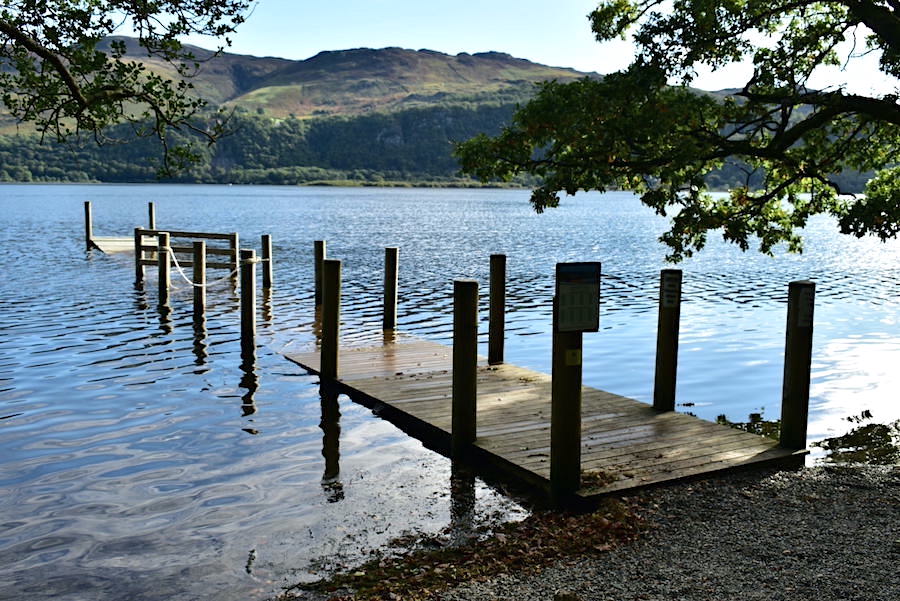 Another unusable jetty, this time at High Brandelhow. 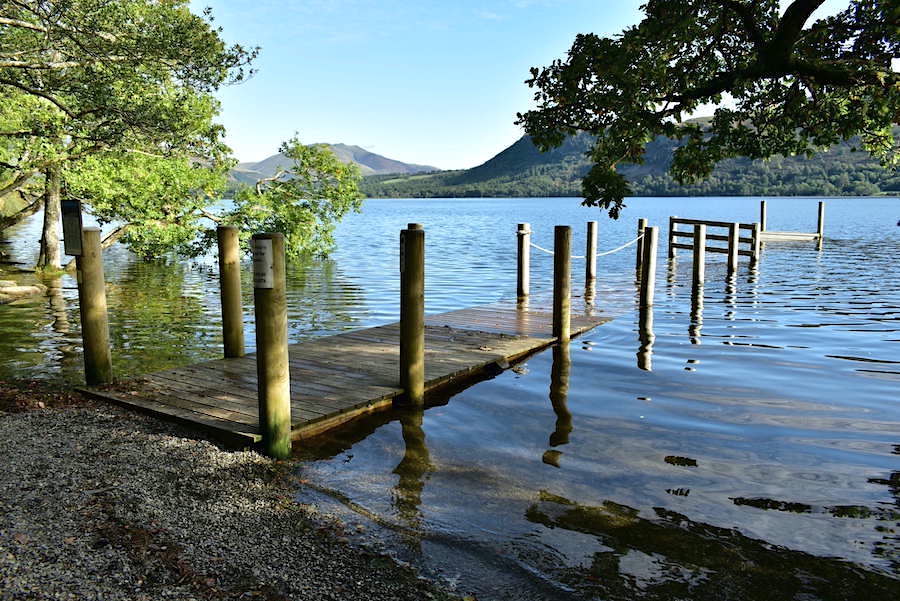 The same jetty from the other side. From here the path became more and more awkward to deal with so we gave up on dealing with all the flooded sections and took to higher ground. 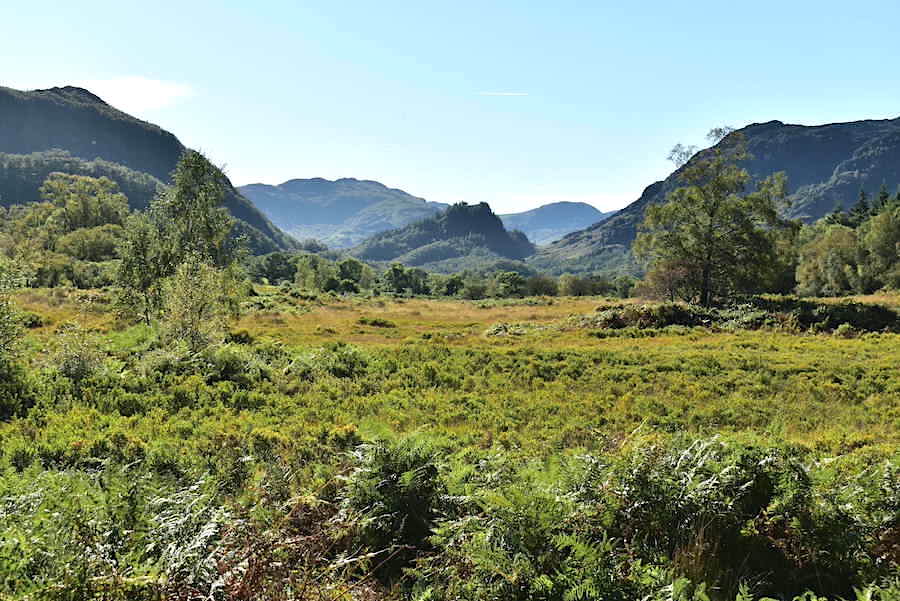 Back down in the valley again and crossing the boardwalks through Manesty Park. We were making our way around Great Bay and heading for the ‘Chinese’ bridge ….. 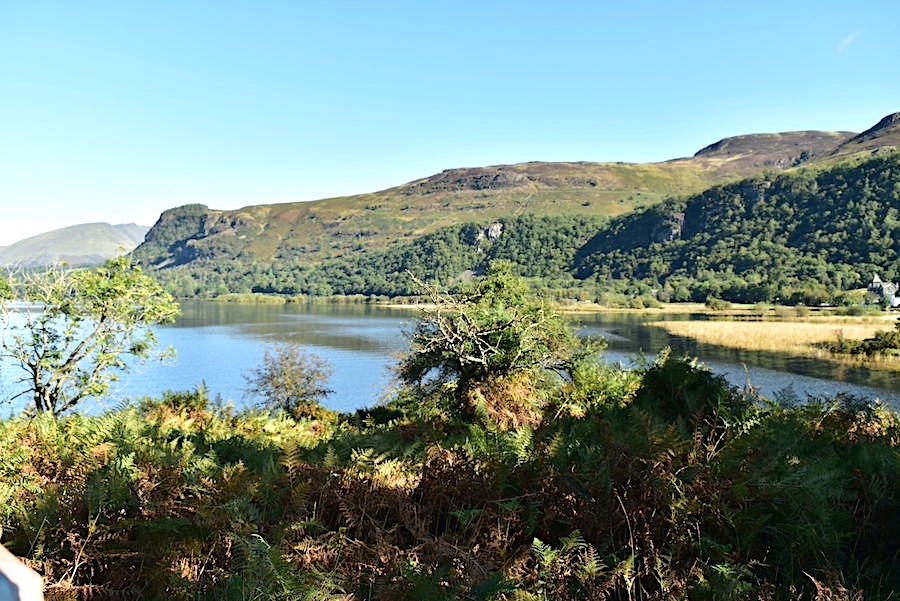 ….. but it just wasn’t possible as the path had disappeared beneath the waters of Great Bay. We hunted around for a possible workaround but all surrounding land was flooded. The only option was the very wet and churned up path leading back to the road at Manesty which we decided not to take. Instead we retraced our steps a little way, perched ourselves up on some higher ground and had a break. Lots of people were out taking this walk today so there was an abundance of disappointment when this point was reached. 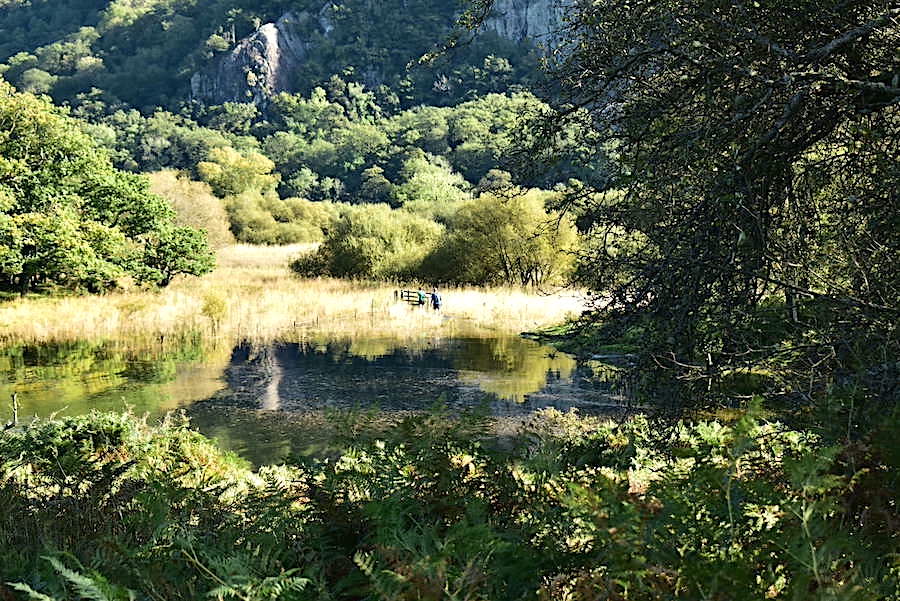 From our higher perch we noticed a couple of walkers who stopped when they reached the flooding and obviously had a chat about what to do next. Suddenly they went for it and plunged straight across, the water up to their knees within seconds. Progress became slower and slower and eventually came to a halt at the tree at the edge of the shot. We were ready to start our return by this time so we didn’t see what happened next. Whatever they decided to do they would have been drenched for rest of their walk. 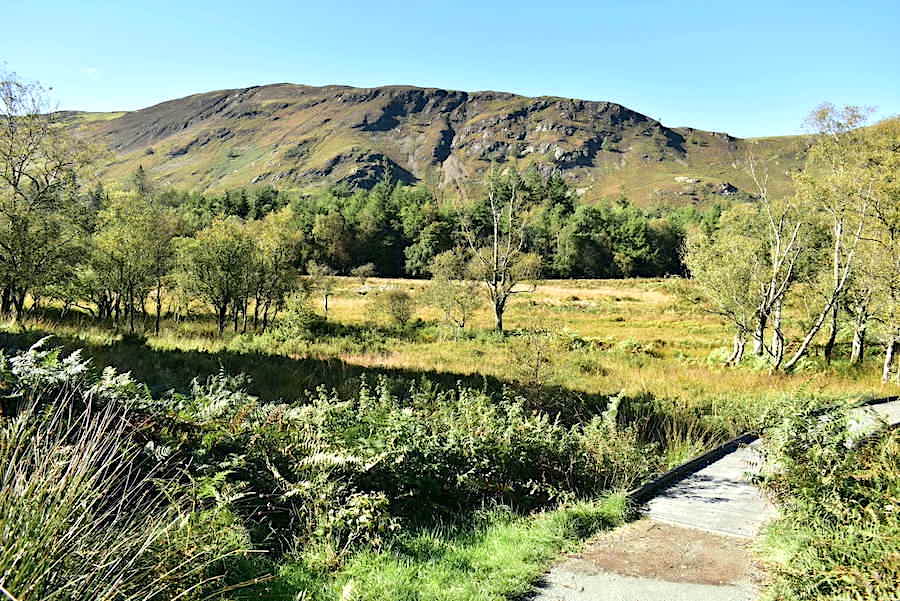 A view of Maiden Moor as we returned to the boardwalks through Manesty Park ….. 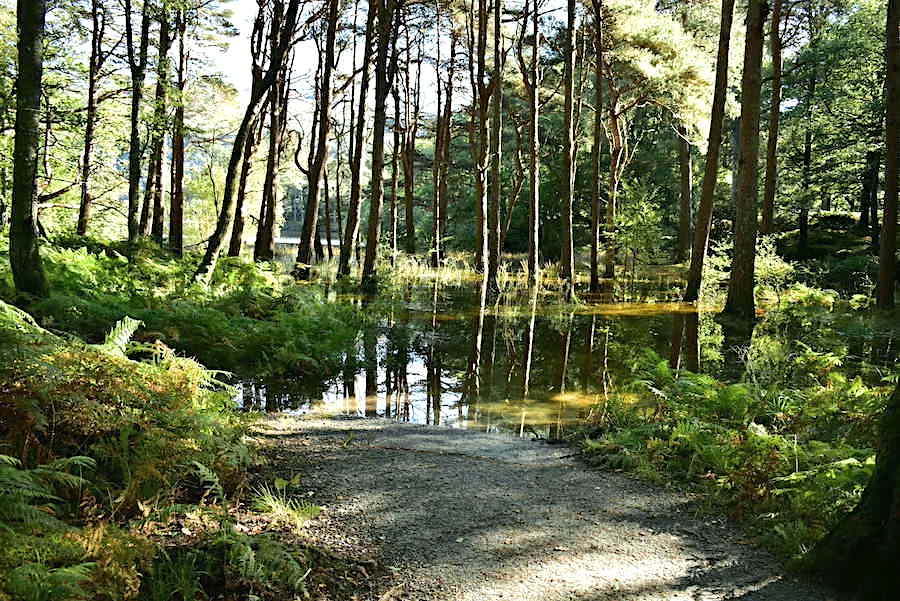 ….. and dealt with yet more flooded paths further on. 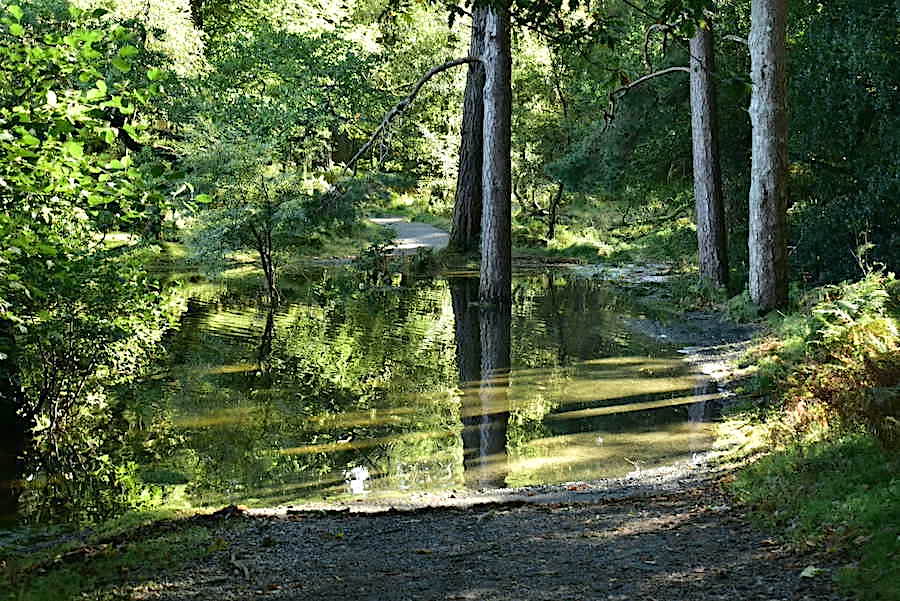 Lots of diverting having to be done today for obvious reasons. 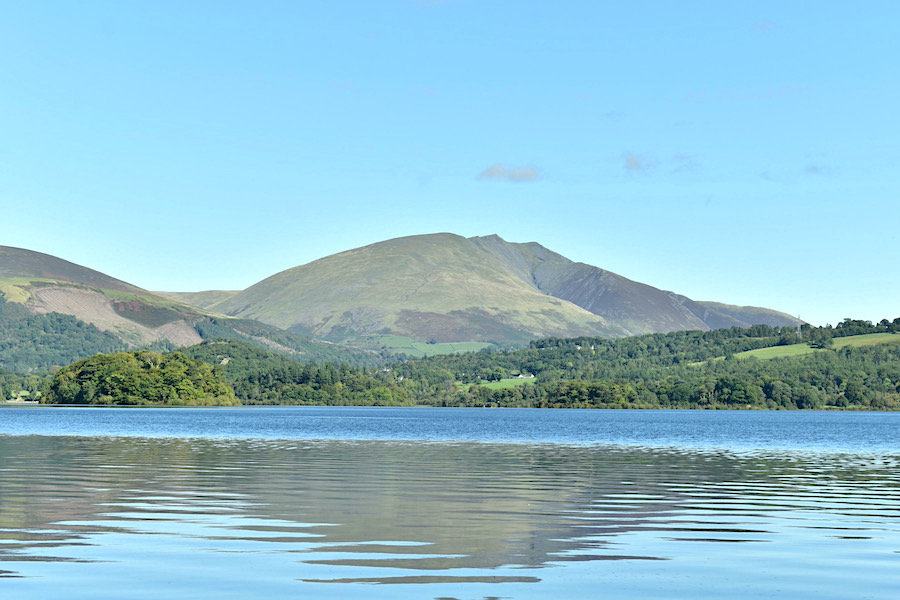 Blencathra from a section of dry path. 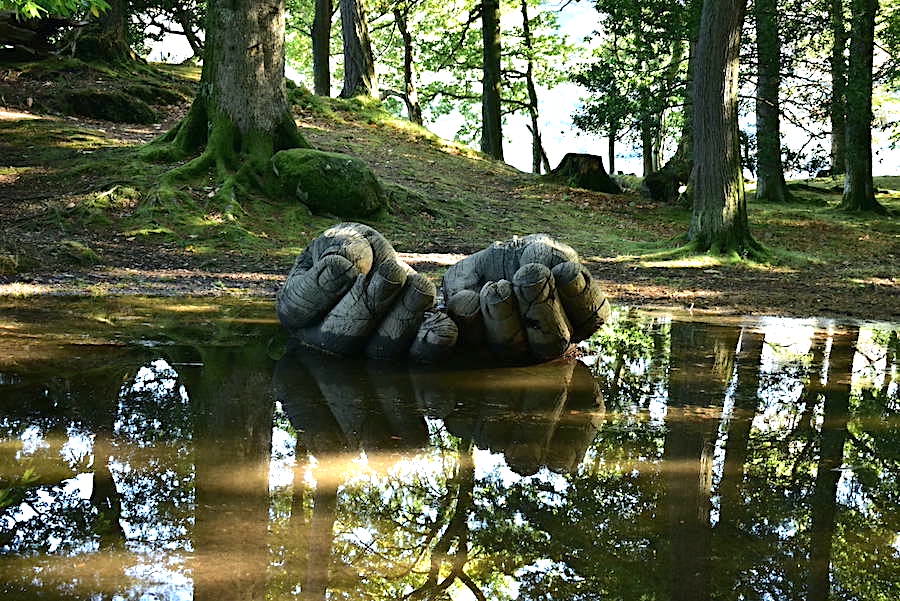 Back to ‘the hands’ island. The sculpture isn’t normally in the middle of a large pool of water. 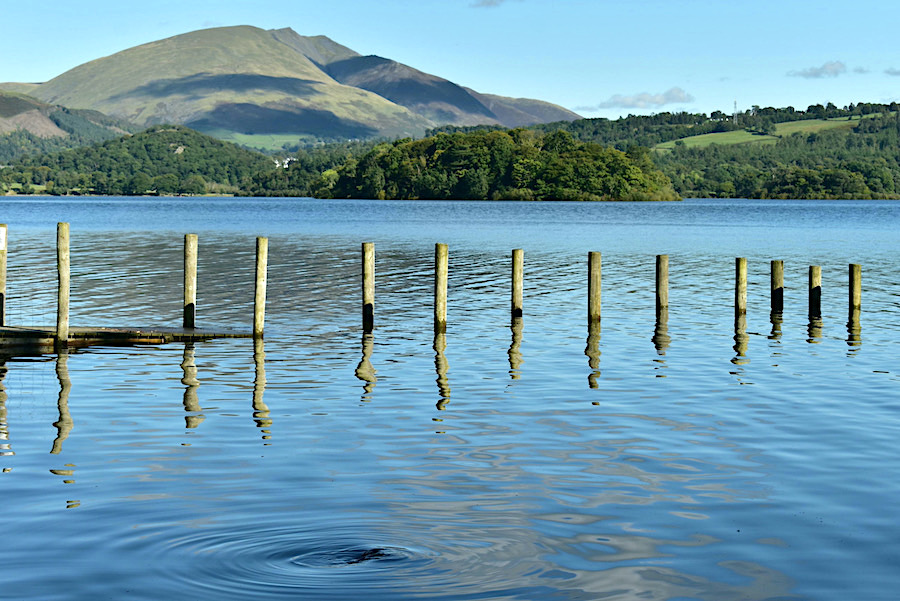 The jetty at Low Brandelhow has completely disappeared too. 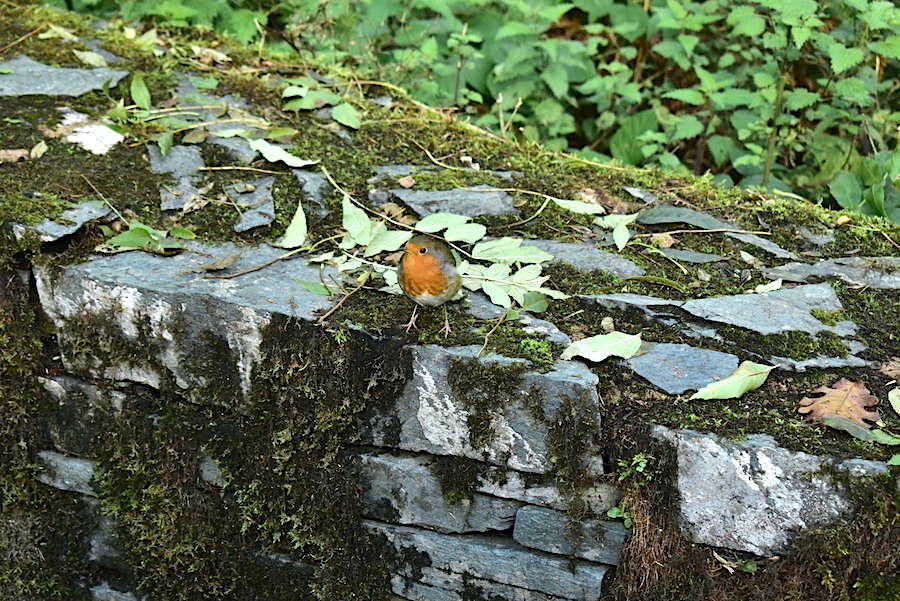 We stopped to remove a layer when it became quite muggy walking through the woodland. Robins seems to equate stationary human beings with food and within seconds one appeared on the wall beside us, although it was out of luck today as we had nothing left to give. 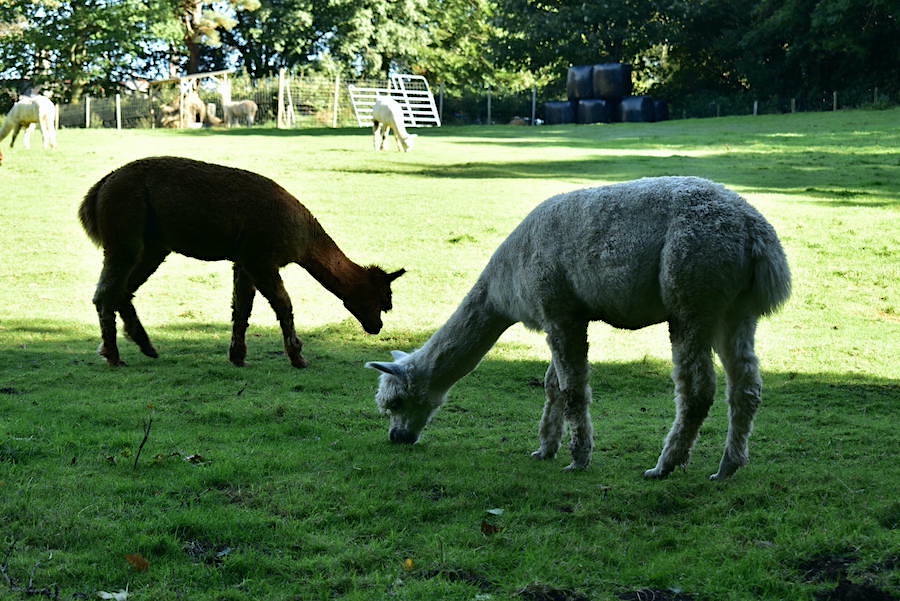 Alpacas quietly grazing as we passed alongside Lingholm. Plenty of people were visiting the Lingholm Kitchen and Walled Garden today and I guess that the alpacas are a big attraction too. 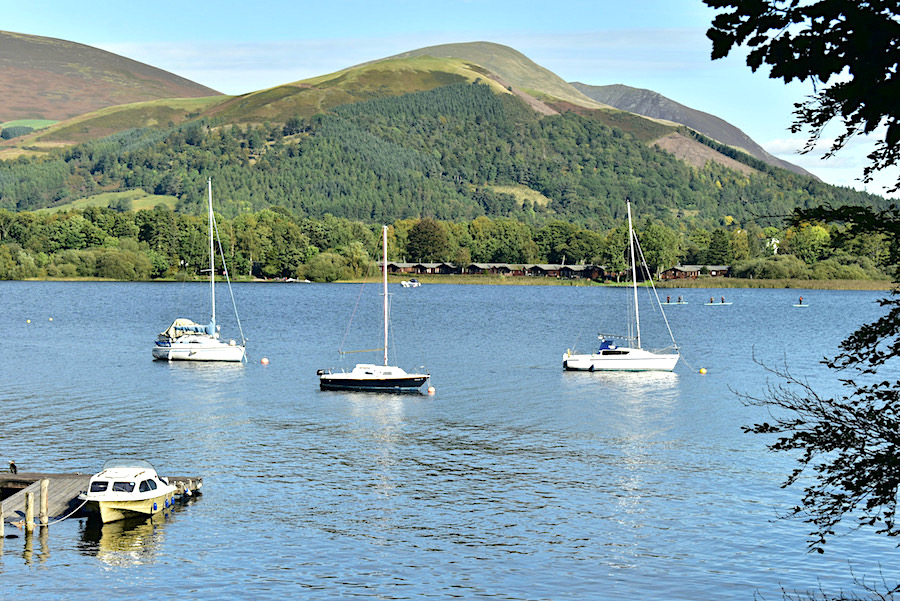 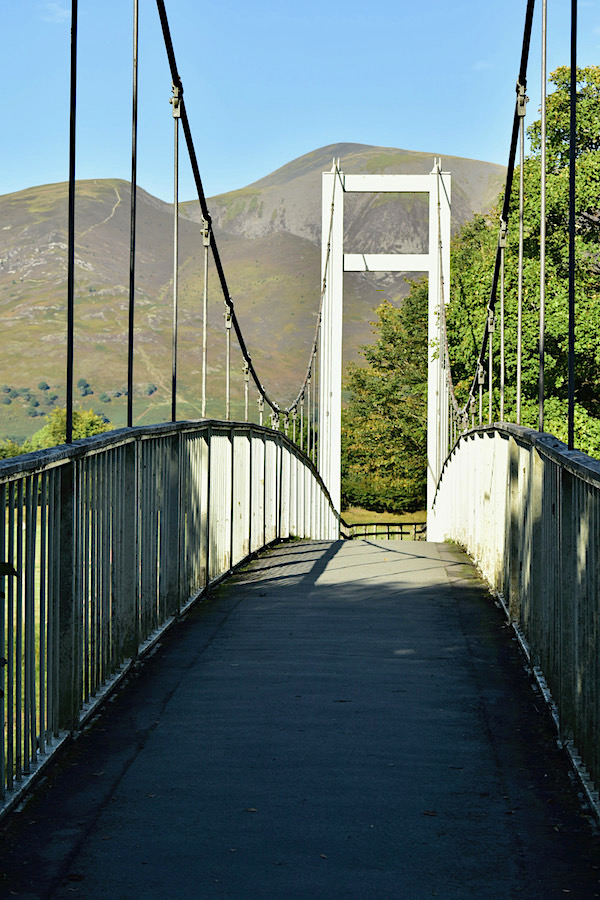 Back at the suspension bridge with the view of Carl Side and Skiddaw beyond. 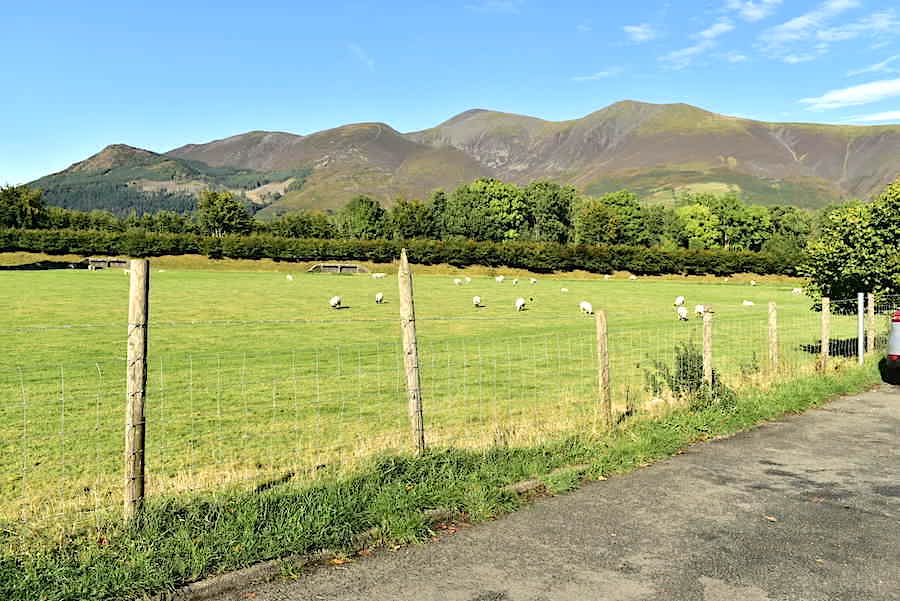 Back on the parking lane and the lovely view of the Skiddaw group on the skyline which means that today’s walk is at an end. Shame that we couldn’t do the whole circuit of Derwentwater on such a lovely day but the good weather more than made up for that disappointment, especially after the last couple of wet and windy weeks.