The old quarry car park was almost bursting at the seams when we arrived but we did manage to squeeze in eventually. More and more cars kept arriving, their drivers turning in hoping to find a space only to have to drive straight back out again. The grass verge on the opposite side of the road, once a lay-by but no longer since someone with misguided authority decided to have it removed a few years ago, was also being used by drivers anxious to find somewhere to park. The whole place oozed frenzy and desperation and as I looked across towards the wall rising up the slopes of Gowbarrow I could see a long trail of people trudging their way up. The sheer quantity of people was somewhat worrying and we began to have second thoughts about carrying on with our planned walk. We waited a while until most of the crowd had left the car park  to allow enough time for walkers to spread out along their various planned routes hoping to avoid walking in a queue along the narrow paths. It was a forlorn hope nevertheless because before too long we were caught up in the melee which eventually became even worse thanks to some type of fell event taking place. We only turned out because a decent day turned up and Gowbarrow is an old, and handy, favourite. Sometimes you just wish you hadn’t bothered. 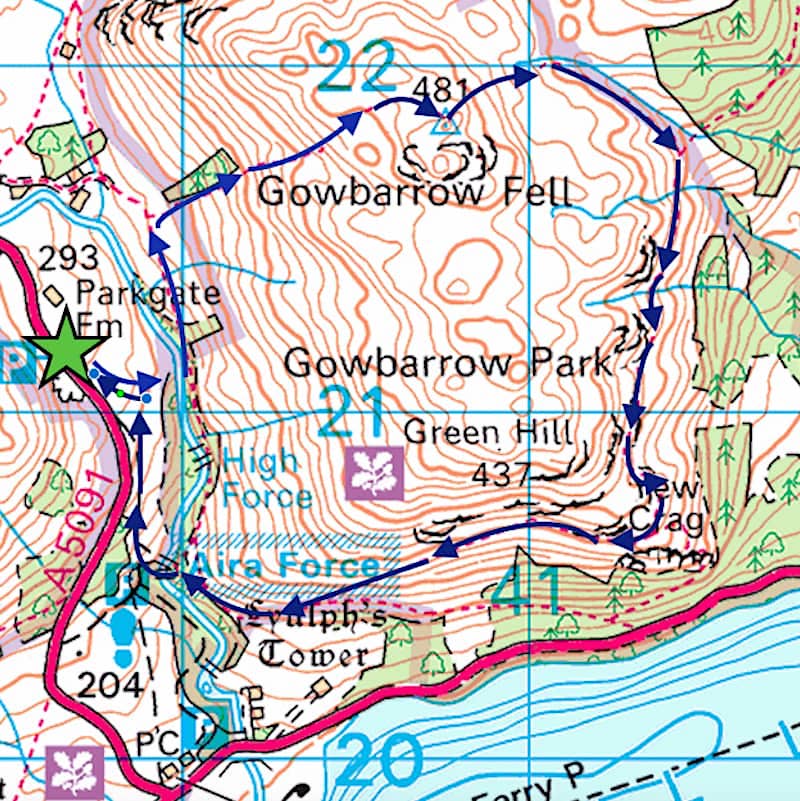 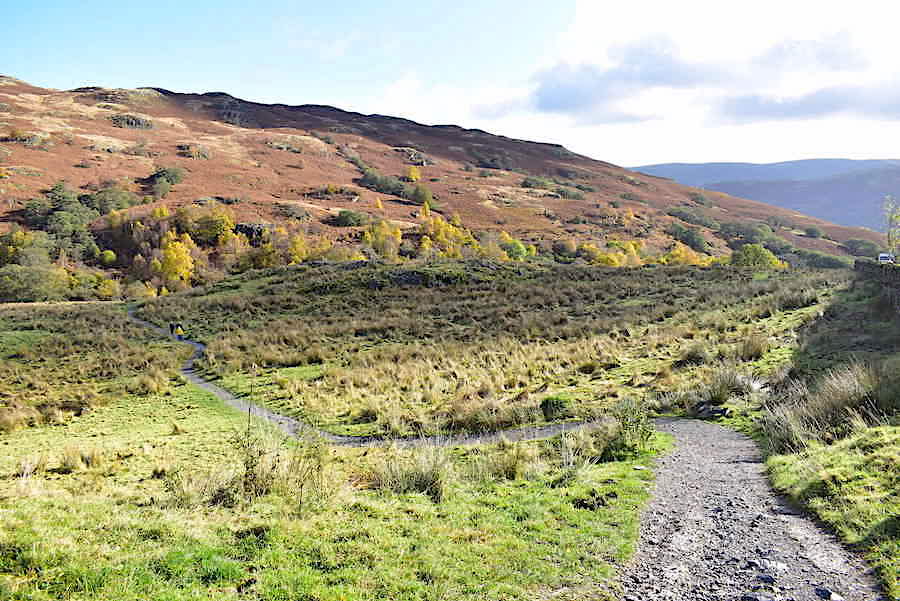 Heading down the path from the car park towards High Cascades bridge from where shouts, screams and barks are already reaching our ears, it sounds like bedlam. 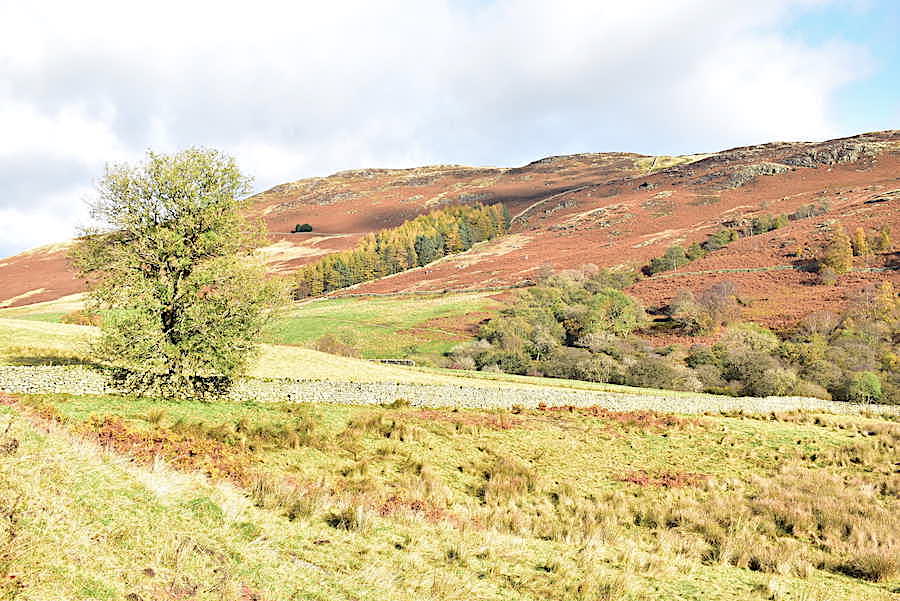 Looking over towards the wall, alongside which is the path we are intending to use. Seeing so many people making their way up it does nothing for my peace of mind but the lovely autumn colours offer some compensation at least. 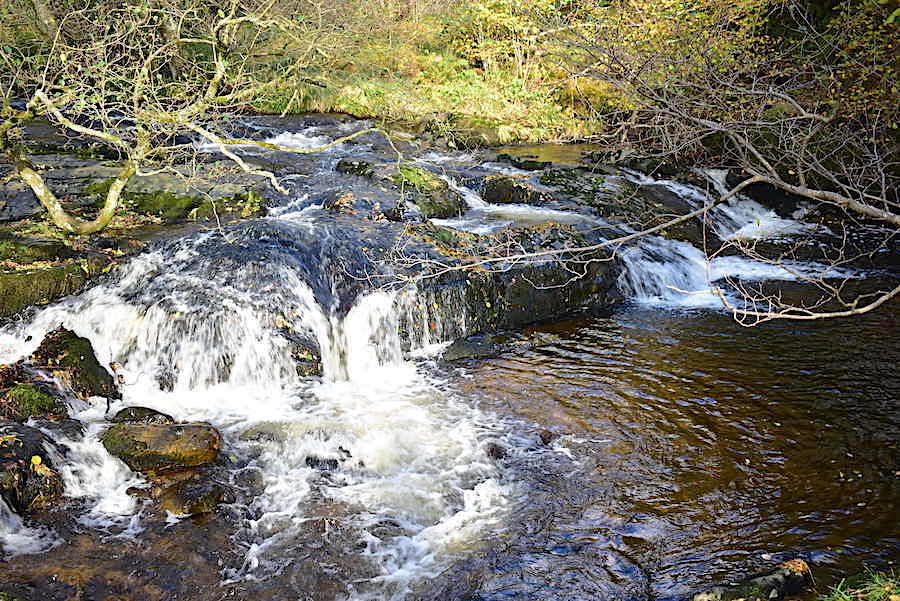 Looking upstream at Aira Beck from High Cascades Bridge. This was the only shot possible, the bridge was crowded as was the noisy area below it. 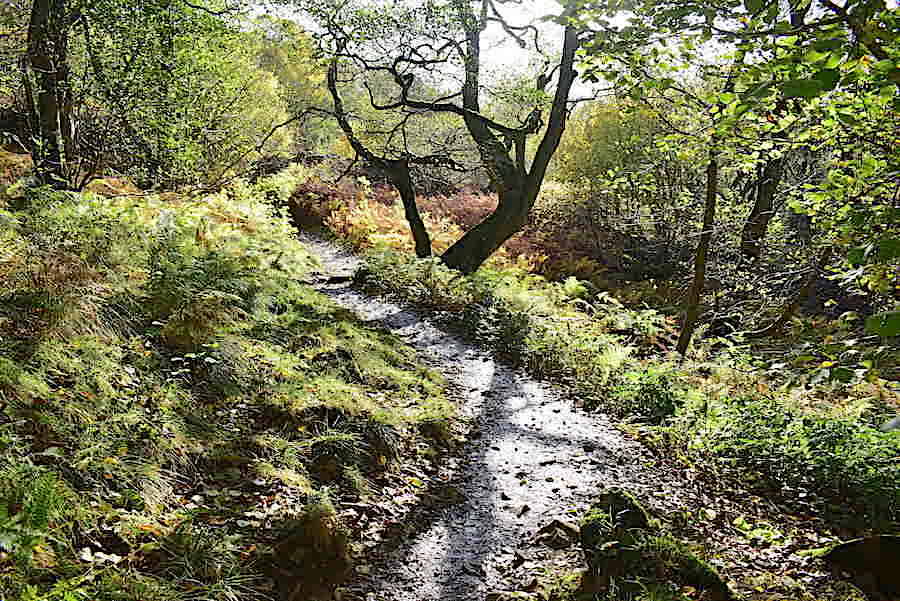 Looking back as we walked through the short stretch of woodland above the bridge, another snatched shot before the next set of walkers wandered around the corner. 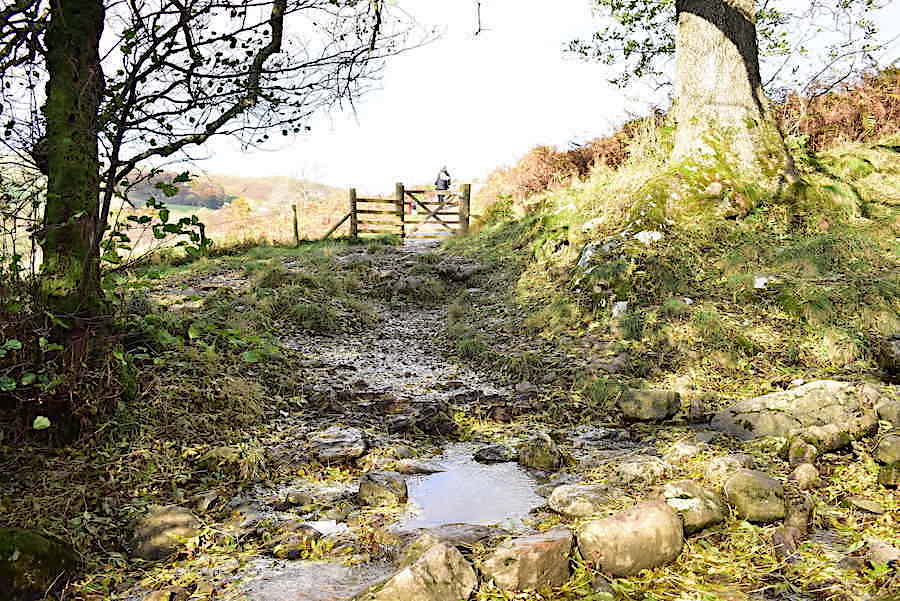 The stretch of woodland ends at this gate and beyond it the path crosses the open fell. The walkers beyond the gate passed by us as I stopped to take the shot. 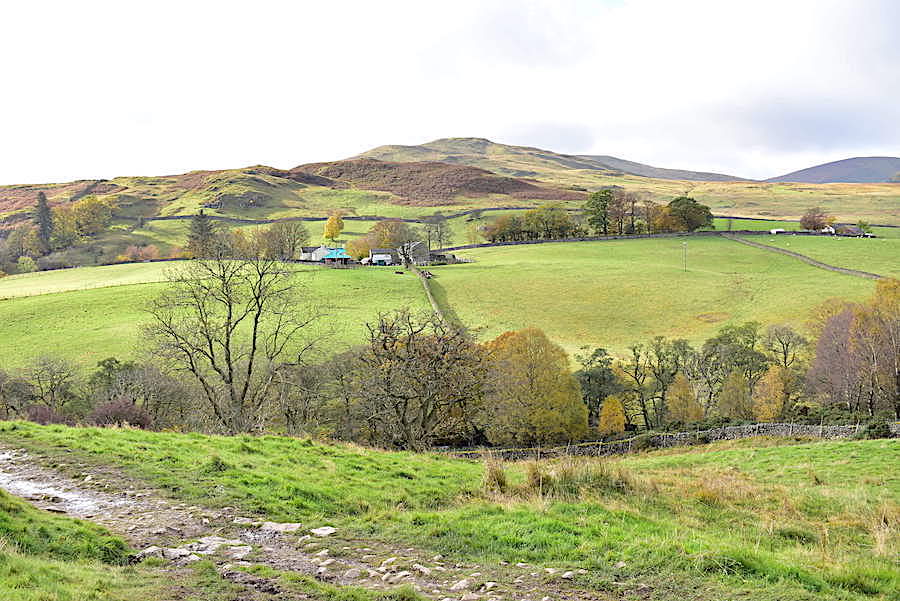 From the path a view of Watermillock Common beyond Parkgate Farm. 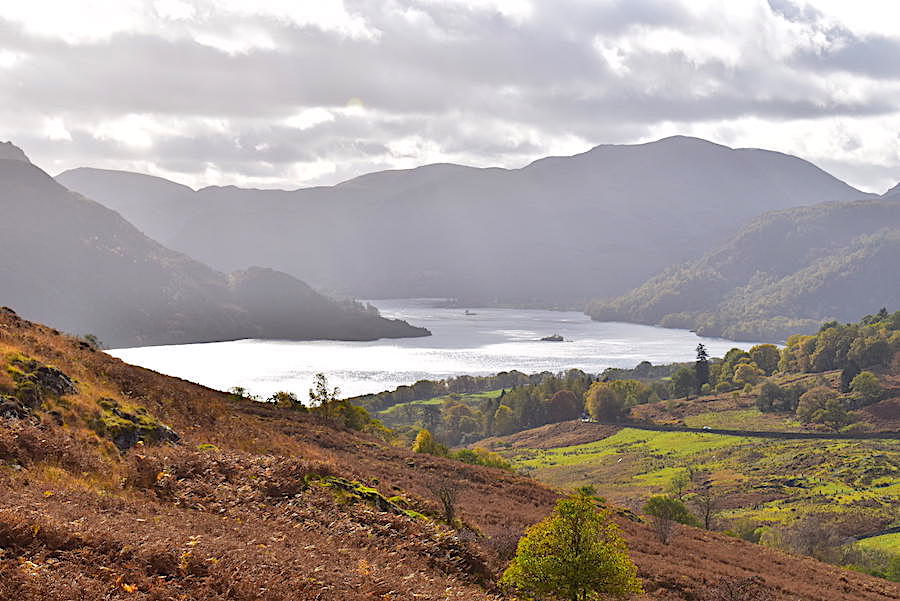 A stop to remove jackets provided the opportunity for a shot along Ullswater although the heavy cloud hanging above us, plus the sun behind them, prevented us having much of a view. 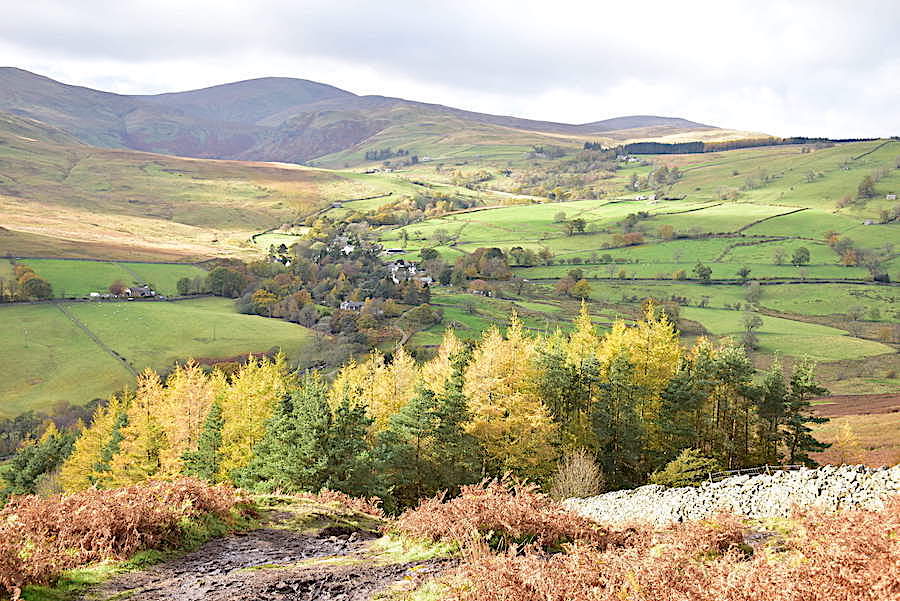 In the other direction things were a rather better as dappled sunlight lit up the fields around the little hamlet of Dockray every so often. Great Dodd and Clough Head now becoming more prominent on the skyline. 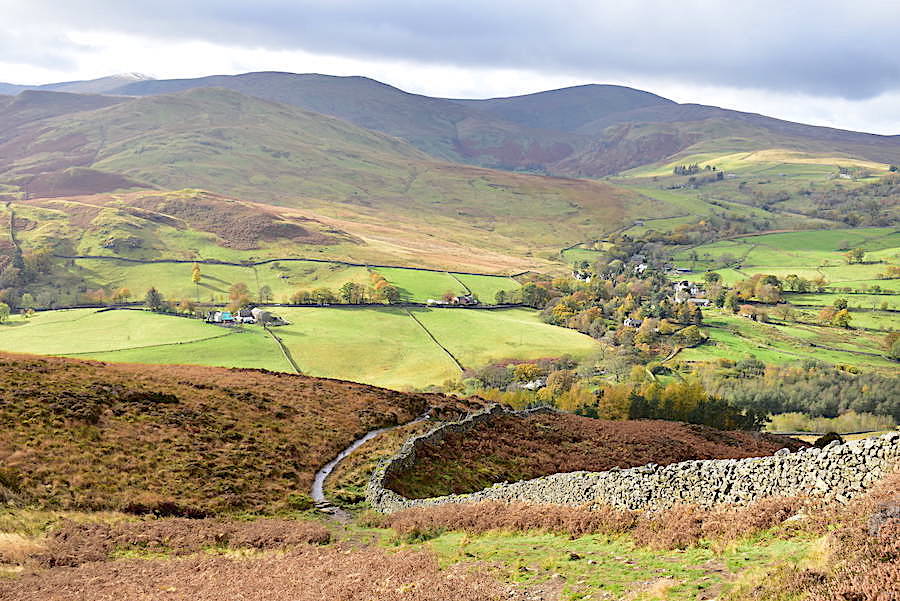 Another look across the sunny fields towards the shadowy outlines of Stybarrow Dodd and Great Dodd. On the extreme left, behind Stybarrow Dodd, is Raise and if you zoom in and look very closely it is possible to see a dusting of snow across its top. Cloud wasn’t obscuring the fell tops today, and we have had a very early fall of snow as reported at this link  –https://mountaincowardadventures.wordpress.com/2019/10/26/bloody-snow/#more-12166 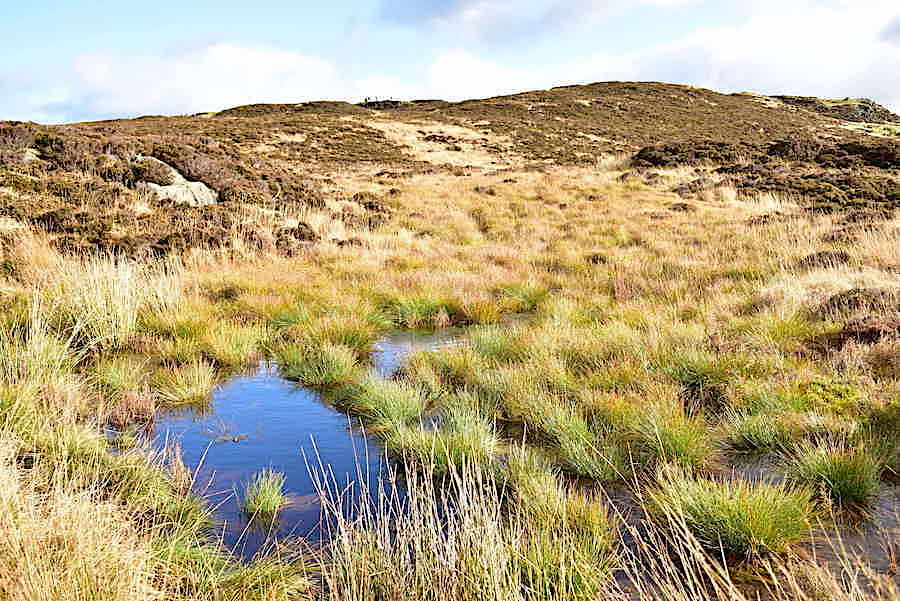 Heading up to the summit now where walkers were clustered around the trig column only to be replaced by more as soon as they moved away. Jackets have been put back on, with hoods pulled tight, now that we’re exposed to the strong cold wind blowing across us. 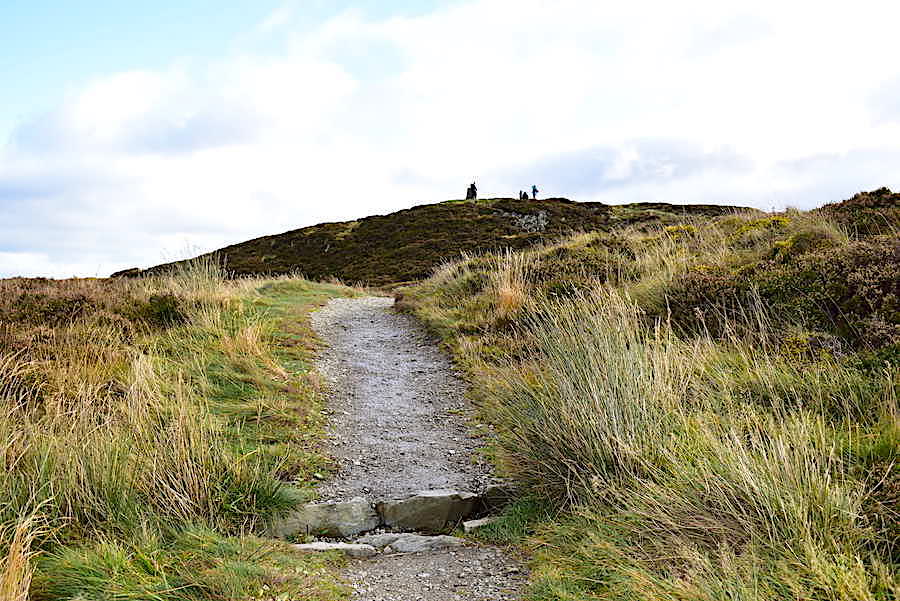 Approaching Airy Crag, the summit of Gowbarrow, where a constant stream of walkers arrived and left. 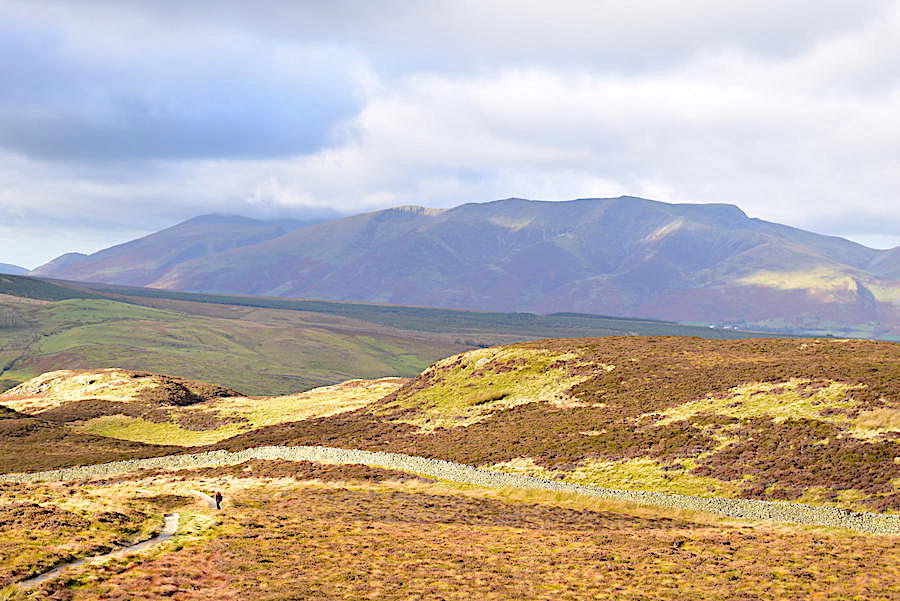 A look over towards Blencathra as I waited my turn at the crowded trig column ….. 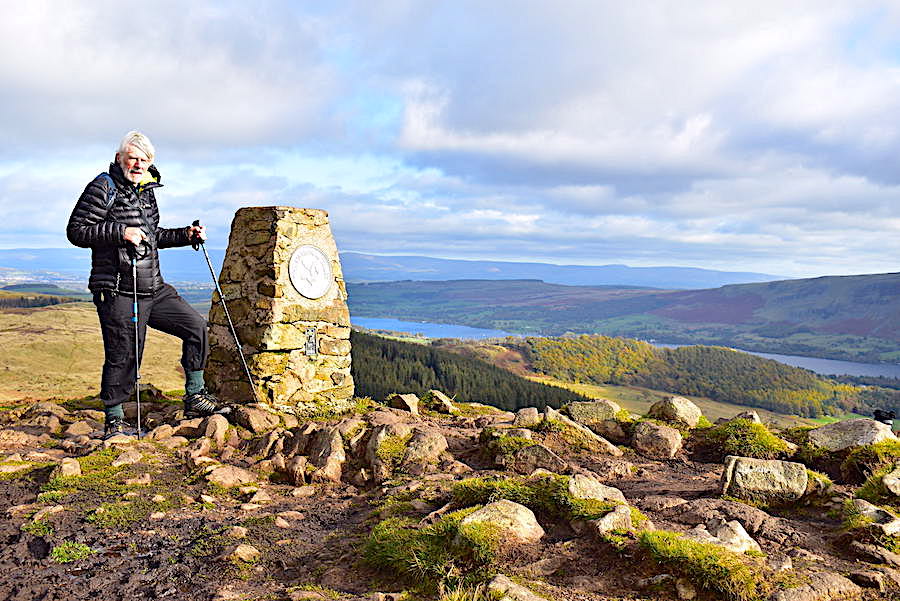 ….. and a quick shot of J being windblown beside it, time to get out of the wind and get the coffee out methinks. 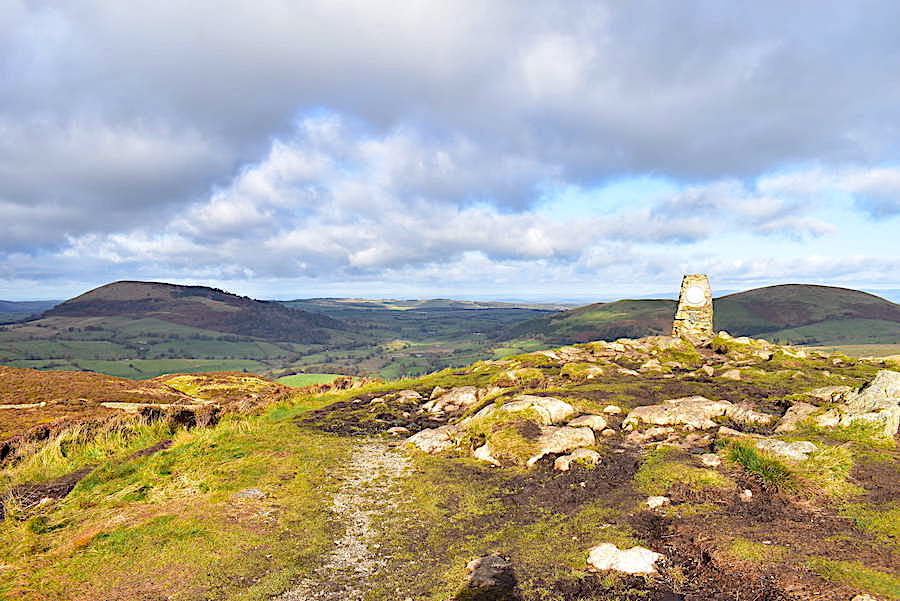 A quick look back, mostly for a shot of the cloud formations, as I made my way over the top before dropping down into a sheltered little hollow on the eastward side, where several other walkers were doing exactly the same. 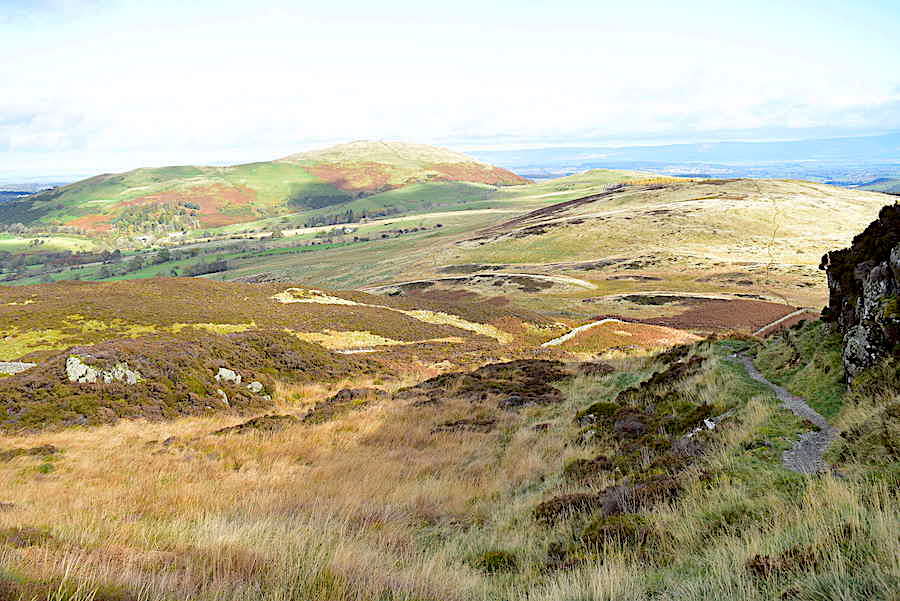 Coffee break done with and after discussing which descent route we should take we opted for the terrace path, which we hadn’t used for quite a while, rather than take the Green Hill route which is generally wet at the best of times. After all the recent rains it definitely wouldn’t be the best of times today. Opting for the terrace path turned out to be one big error. Wet feet would have been preferable to frayed nerve endings. We started our descent around the back of Airy Crag with this view of Little Mell Fell. 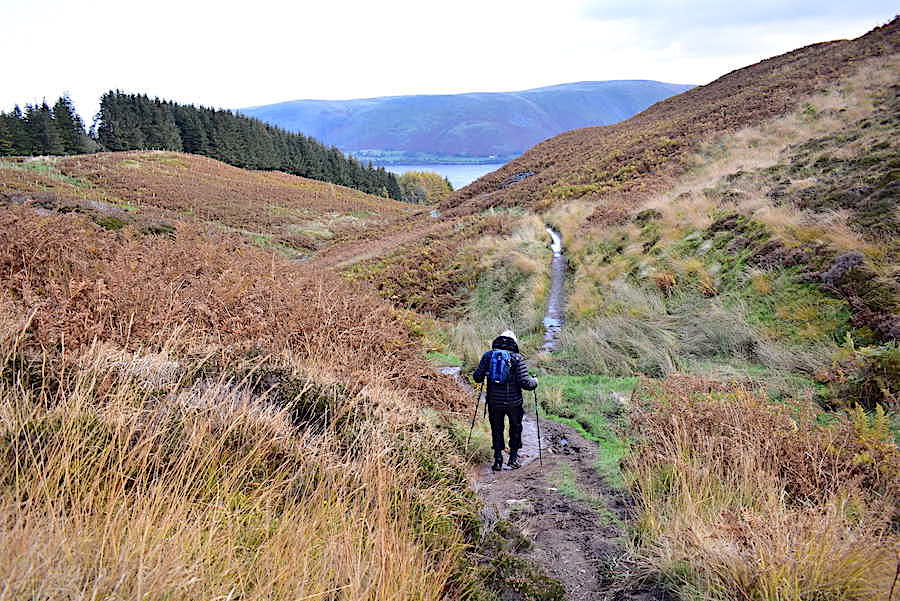 So far so good but the path soon turned very wet and very muddy having been trampled by large numbers of feet today. The path is deserted for now but ….. 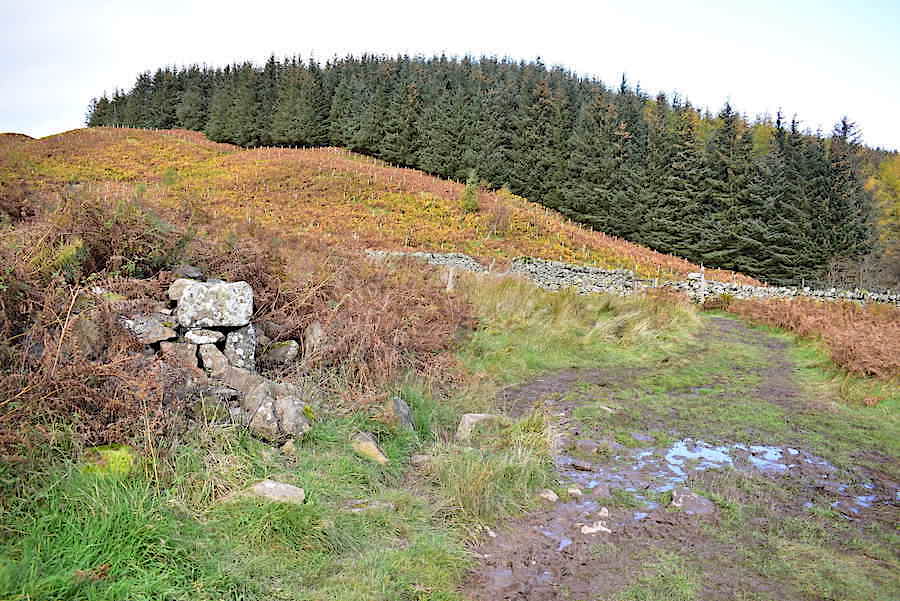 ….. at the point where the Ullswater Way passes in front of the old shooting box we began to realise that progress from here on was probably going to be at snail’s pace. Dozens and dozens of people could be seen ahead of us and coming towards us on the very narrow and churned up path, general walkers were mixed in with those participating in the fell event with a great deal of slipping and sliding taking place as people tried to get past each other. 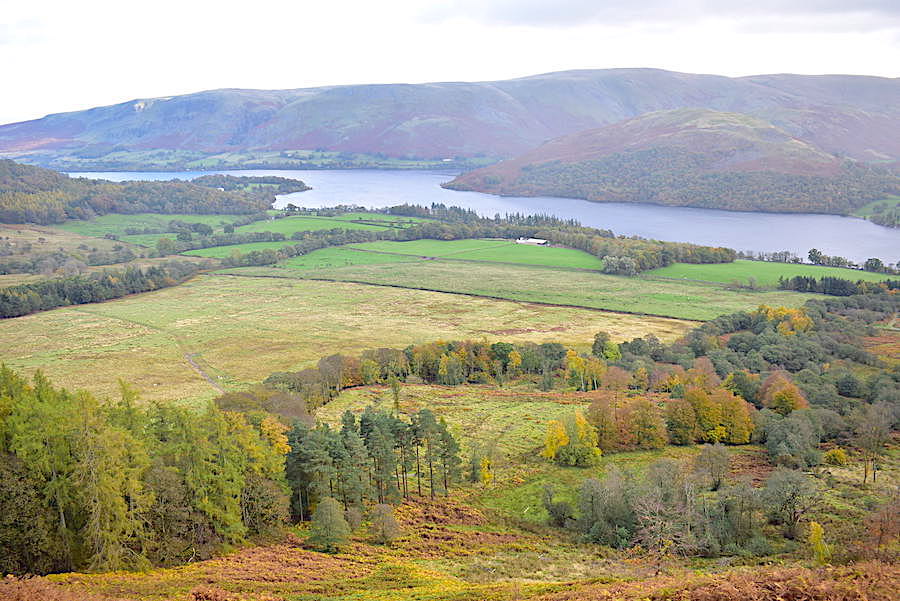 It was almost impossible to stop for photos as we walked the terrace but I did manage a brief stop for this view across Ullswater towards Hallin Fell and the Loadpot Hill range. We were under a very large clump of cloud all the way down from the summit so it didn’t really matter, apart from the lovely colours in the foreground everywhere was looking decidedly gloomy anyway as this shot shows. 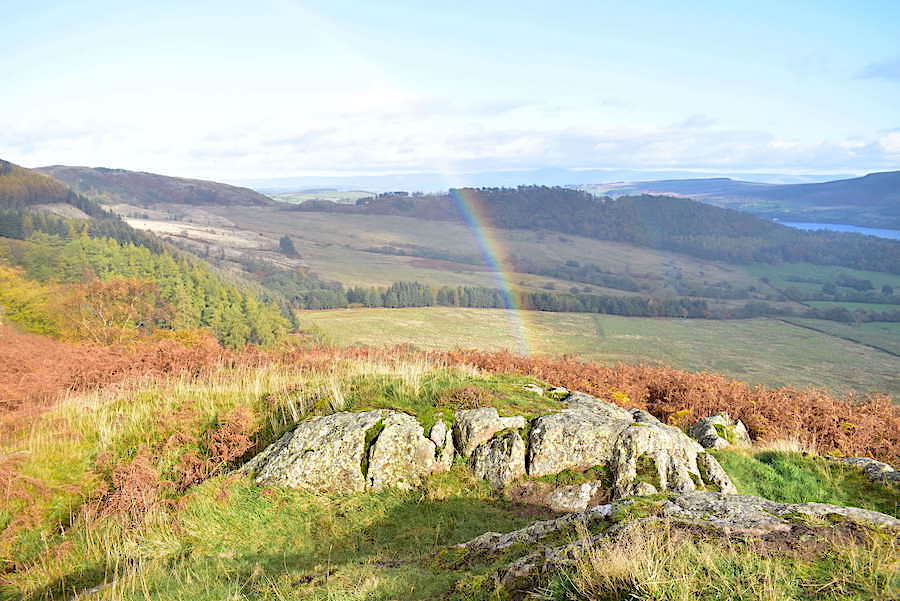 By the time we reached this point we’d had a brief rain shower and as it moved away we had a few seconds worth of this little rainbow when the sun re-appeared. 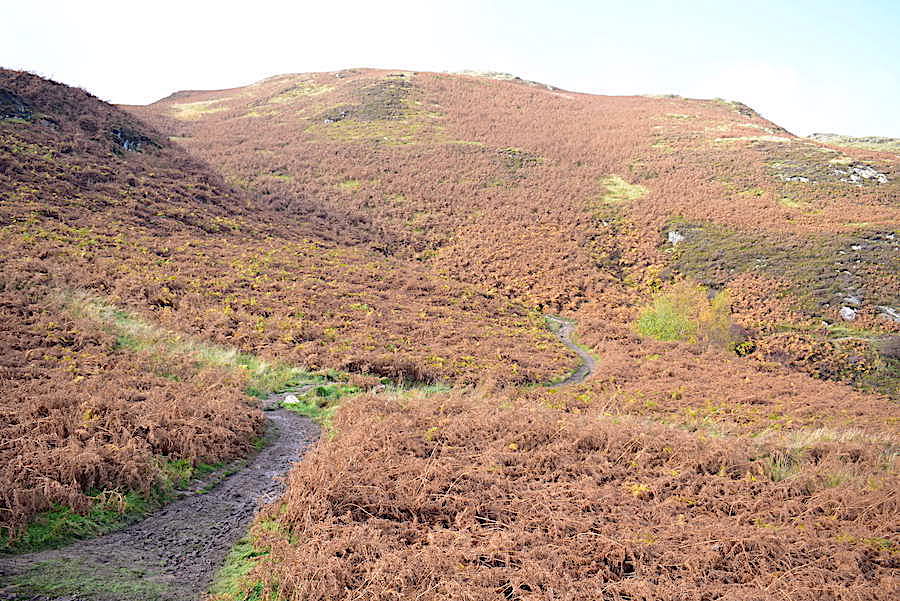 From the same spot I took this look back to the summit of Gowbarrow ….. 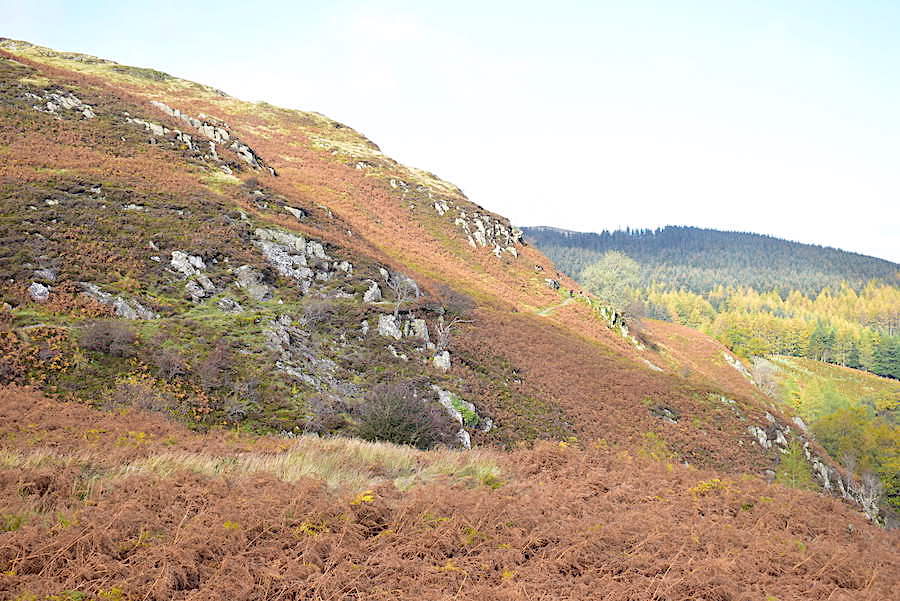 ….. and then moved the camera a little to my right where the terrace route can be seen. Its normally a very pleasant route to take and the views are lovely, today it was more of a nightmare than a pleasure. As we turned to leave this spot we could see a very large, and very slow moving, group ahead of us each one directly behind the one in front with not much opportunity to overtake on the narrow muddy path. Add to that more walkers and runners coming towards them and you may get some idea of what things were like today. 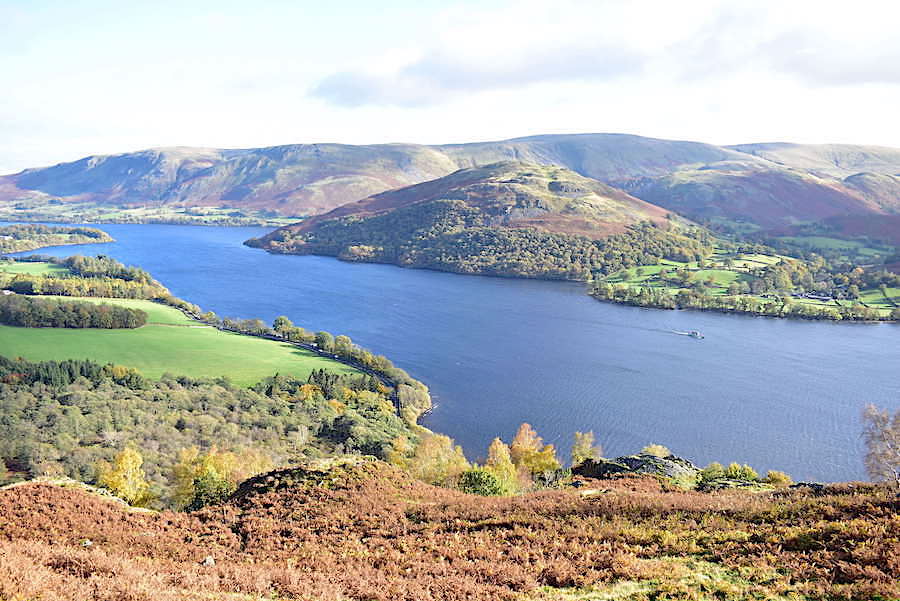 We were reduced to a crawl by the sheer numbers but an opportunity to get ahead of the group finally turned up so we seized it and increased our pace to put as much distance between us as we could. When there was enough I finally allowed myself another photo opportunity for this view across Ullswater before we dashed off once more. 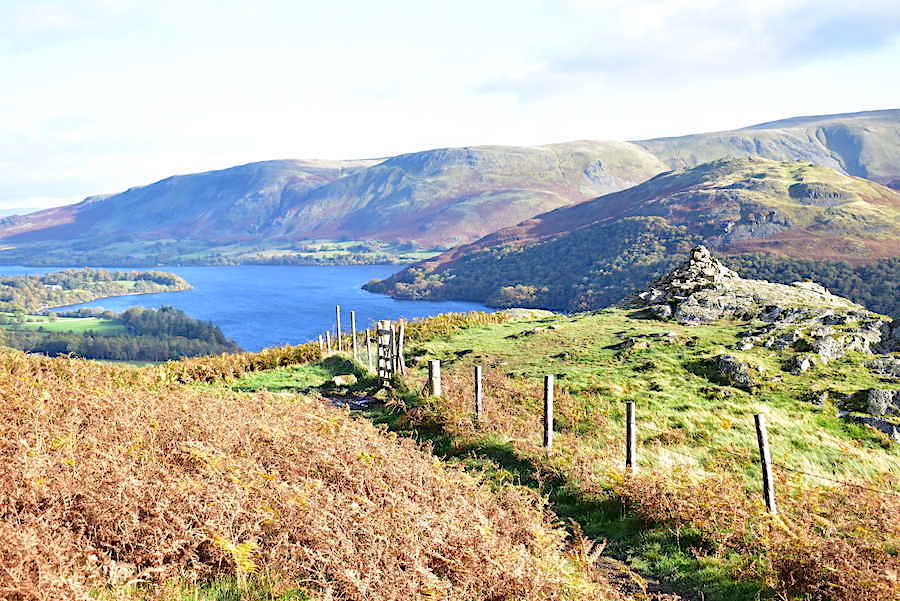 We would normally nip across to the viewpoint on Yew Crag and take in the views from there but we didn’t want to take the risk of being caught up in the melee once more so we by-passed it today. 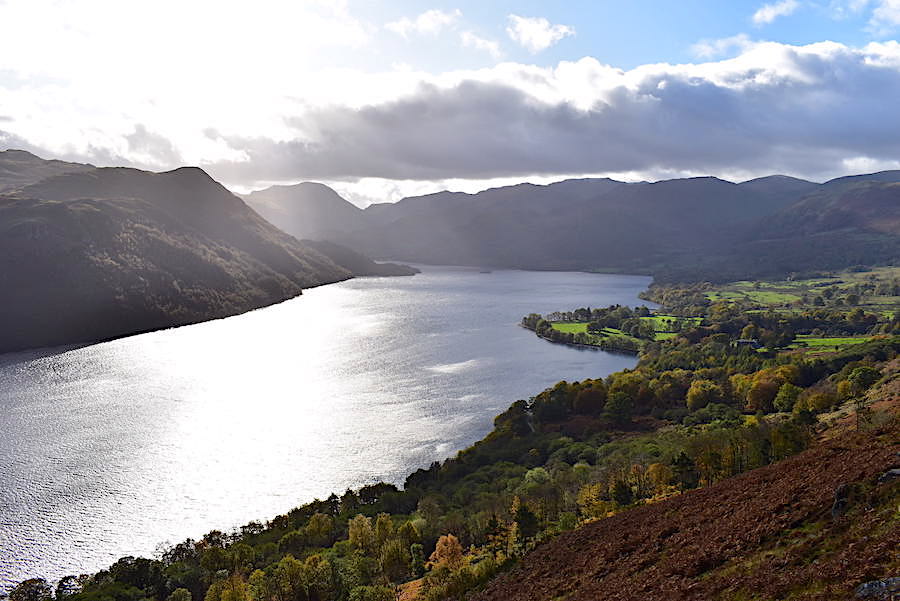 The sunlight filtered through the cloud and cast a silver sheen onto Ullswater and illuminating the fields around Aira Point, beyond that only the shadowy outlines of the fells were on view today. 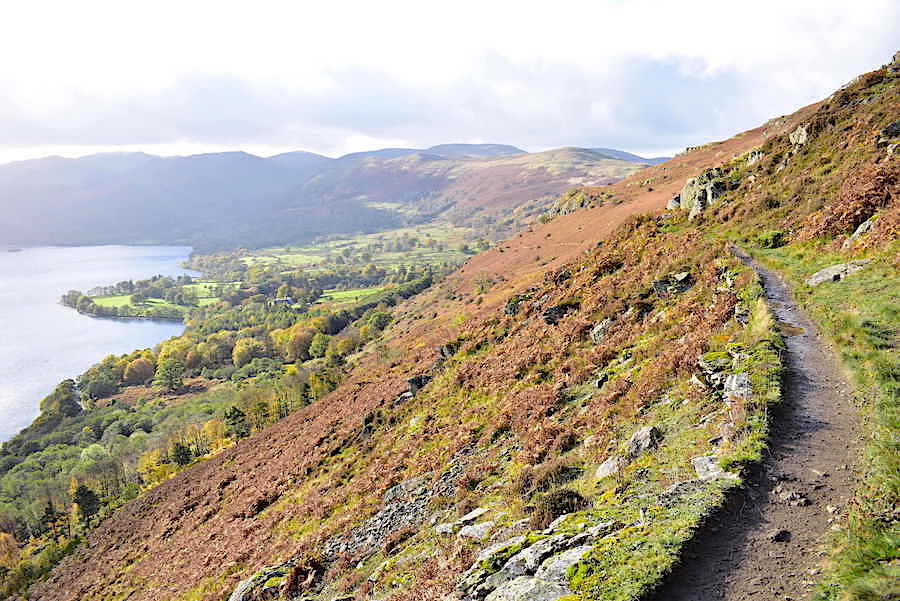 A look along the narrow path which illustrates how difficult it is to pass anyone else who happens to be walking along it. 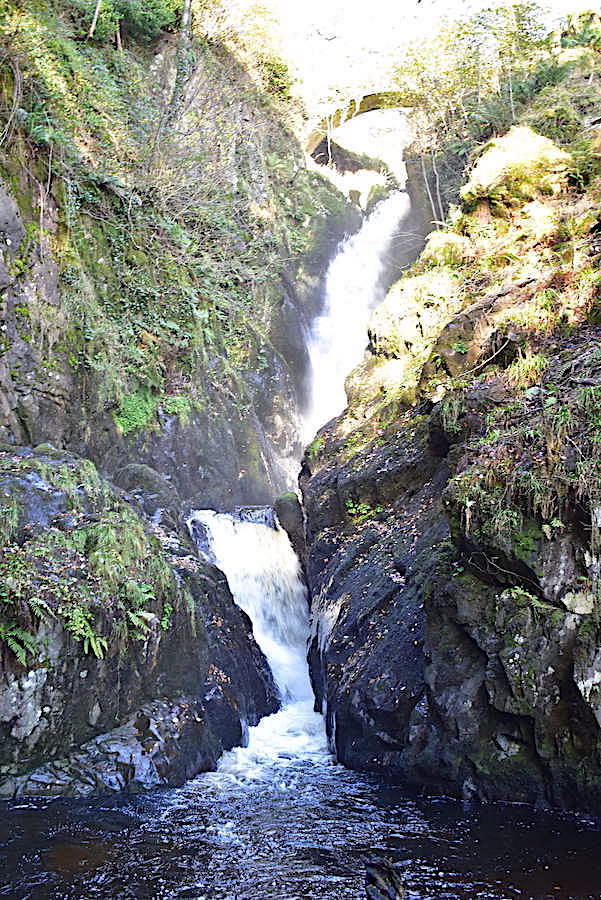 We eventually make it down to Aira Force, in spectacular flow today thanks to all the wet weather of late. Needless to say the place was thronged and I couldn’t wait to get out of it. We climbed the steep steps out of the viewing area and plonked ourselves on one of the bench seats in the wooded area at the top. Just as busy there too, folks wandering to and from the car park just above, many making their way up this side of Aira Beck, with others coming back down it to view the falls. At this point I’d had more than enough of crowds and quite simply didn’t want to have to fight my way back up to High Cascades bridge and back to the car park. J volunteered to go back up and get the car while I waited by the car park entrance for him to drive down the hill and pick me up. 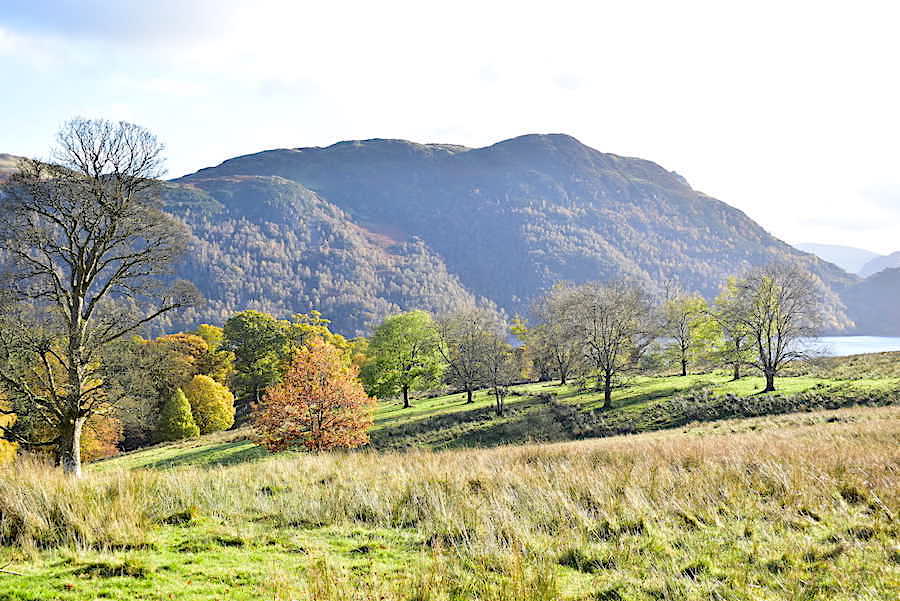 Before making my way back up to the lower car park I had a few quiet minutes away from the crowds looking over the fence towards Place Fell. Having got some of my equilibrium back I walked up the hill to the car park, plonked myself against the wall and waited for J to turn up. A potentially enjoyable walk completely smothered by the overwhelming amount of people here today. I learned later that the event was the Ullswater Challenge, a 24 mile run which basically follows the Ullswater Way, with a high level traverse of  Glencoyne down to Dockray and over Gowbarrow summit thrown in for good measure. I’m beginning to wonder if there are too many such events now? Time was when we planned a walk it wasn’t at all necessary to consider that runners and/or cyclists en masse would feature in any part of it. Now you find yourself wondering if by some chance you may unknowingly stumble into one such mass event whenever and wherever you may have decided to take a walk across the fells.