Weather – occasional sun, mostly cloudy but, for once, it didn’t rain!

Whatever kind of weather the rest of the Lake District was experiencing today I have no idea, but it was a mostly dull morning over in the Eden Valley, again!  Things were beginning to look a little more cheerful by early afternoon when the breaks in the cloud began to grow larger, allowing some occasional rays of sunlight to break through, so we drove over to Howtown for this very short walk on Hallin Fell. The weather this past three weeks has been, to quote the weather presenters, very unsettled, or in my language, downright miserable, constantly wet, constantly windy and constantly dull, and it isn’t looking much better for the coming week either so we might be confined to barracks once again. So, on the basis that ‘a bird in the hand is worth…… ” and all that, off we went to Hallin Fell to spend a very pleasant couple of hours on a lowly but very lovely little fell. 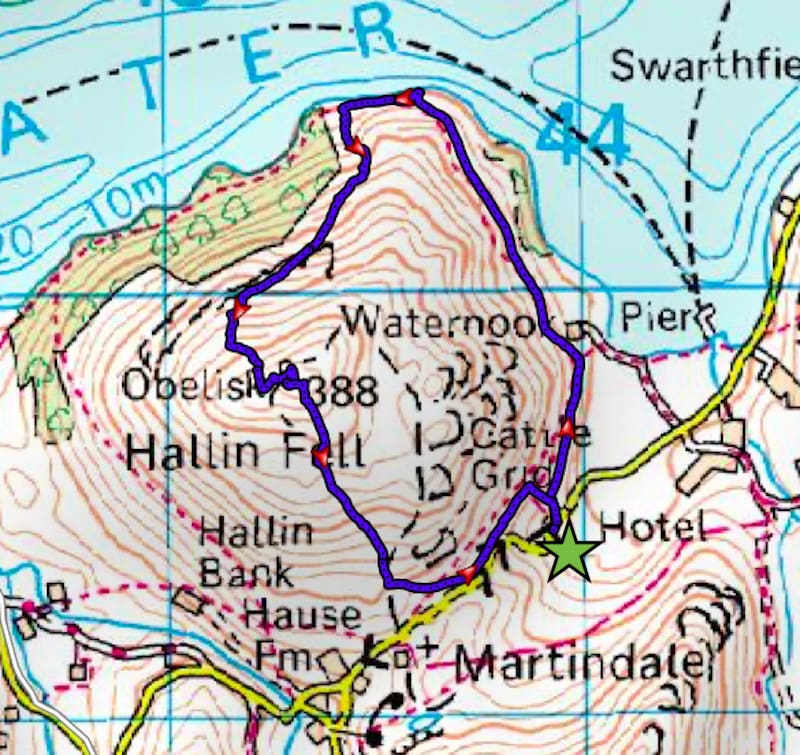 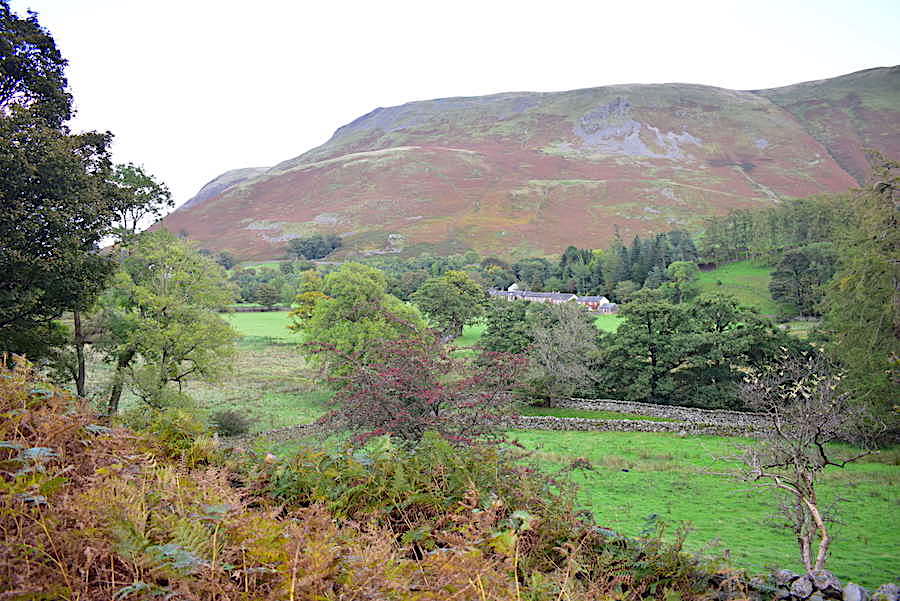 We parked just beyond the cattle grid at the bottom of Hallin Fell from where, after crossing the road, we picked up the path leading around the base of the fell towards Geordie’s Crag. A couple of cars were parked up but on the whole things were very quiet. The yells and shouts of the summer visitors have given way to the cries of the birds and the sound of the wind. A look across over to Bonscale Pike, from the path, reveals that the deep green foliage of a month ago has given way to the richer shades of red, gold and brown as the Lake District fells take on their autumn covering. 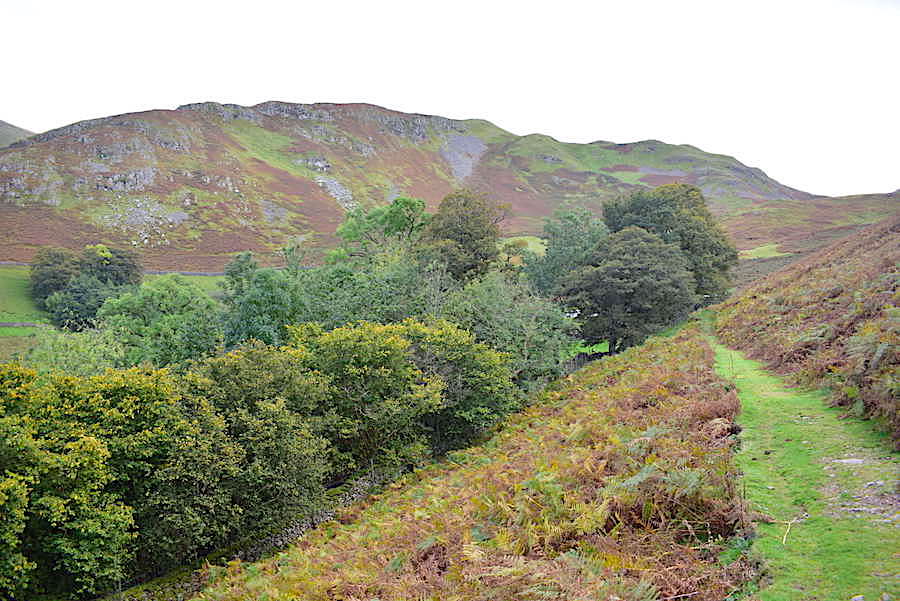 Looking back along the grassy terrace path for this view of Steel Knotts, another contender for a short walk on a poor day especially as we haven’t been up there during the past two years. 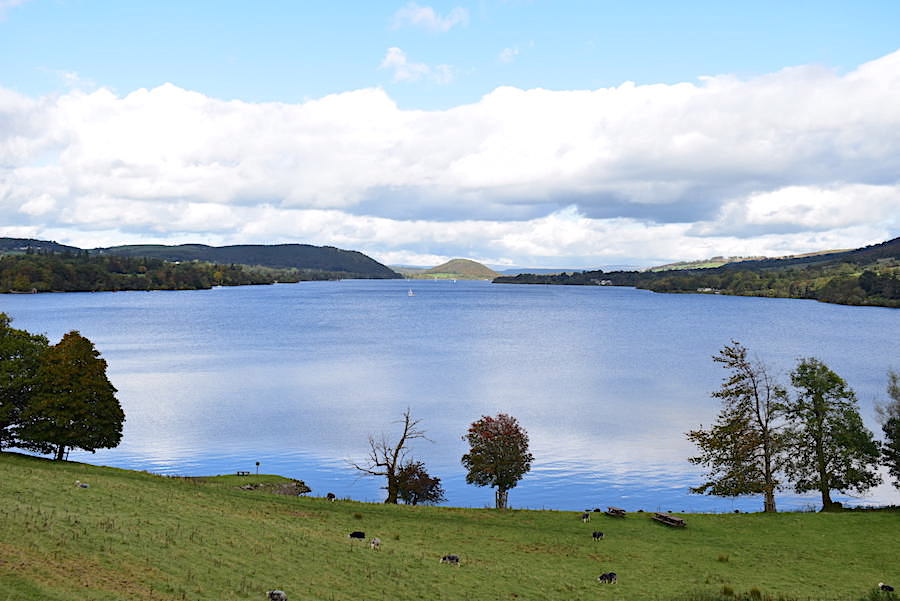 The view from the path opens up just beyond the steps leading to the steamer jetty at Howtown from where there’s this full length view along the north eastern section of Ullswater, which is culminated by Dunmallard Hill in the centre. Alongside Dunmallard Hill is Pooley Bridge where the temporary bridge installed after Storm Desmond has now been removed for work to take place on the installation of the new and permanent crossing so there is no vehicular crossing there now until Spring 2020. A pedestrian footbridge has been installed so it is still possible to cross from one side of the village to the other. 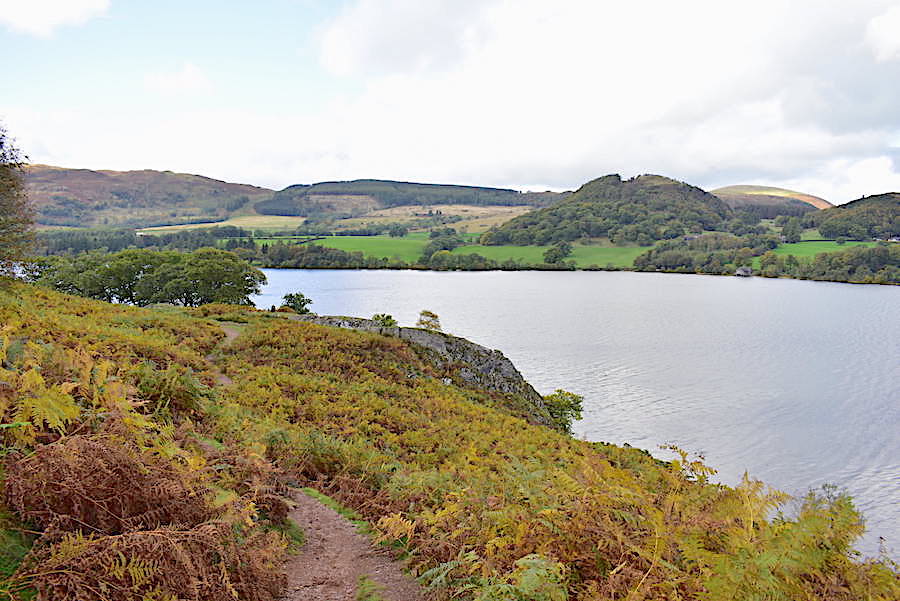 Things turn a little duller as we approach Geordie’s Crag ….. 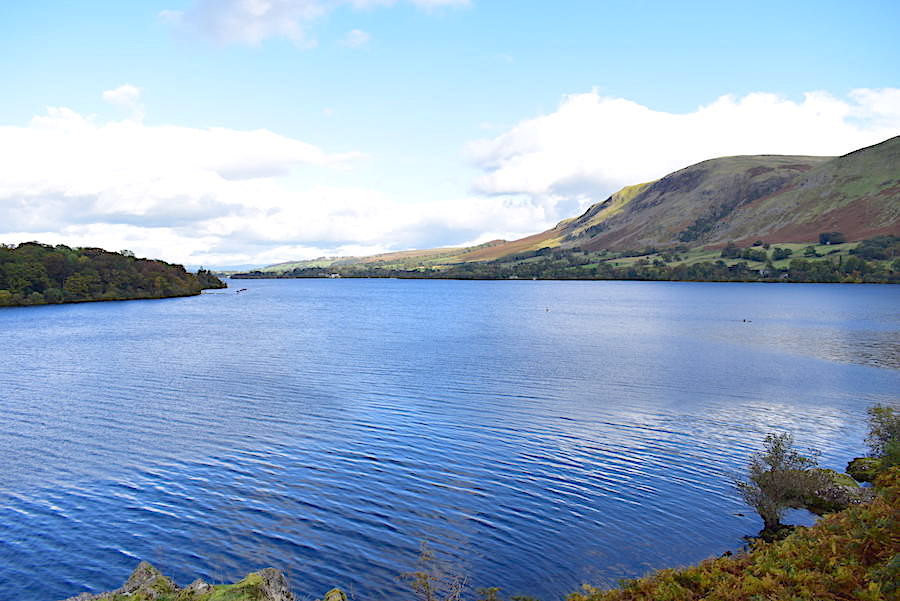 ….. but the view along the breeze ruffled water is still lovely despite the temporary dullness. 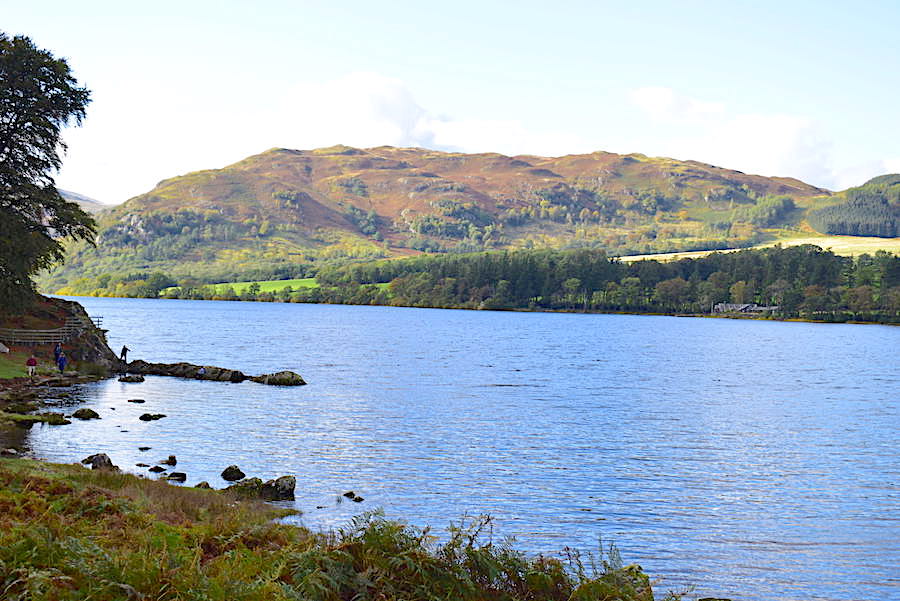 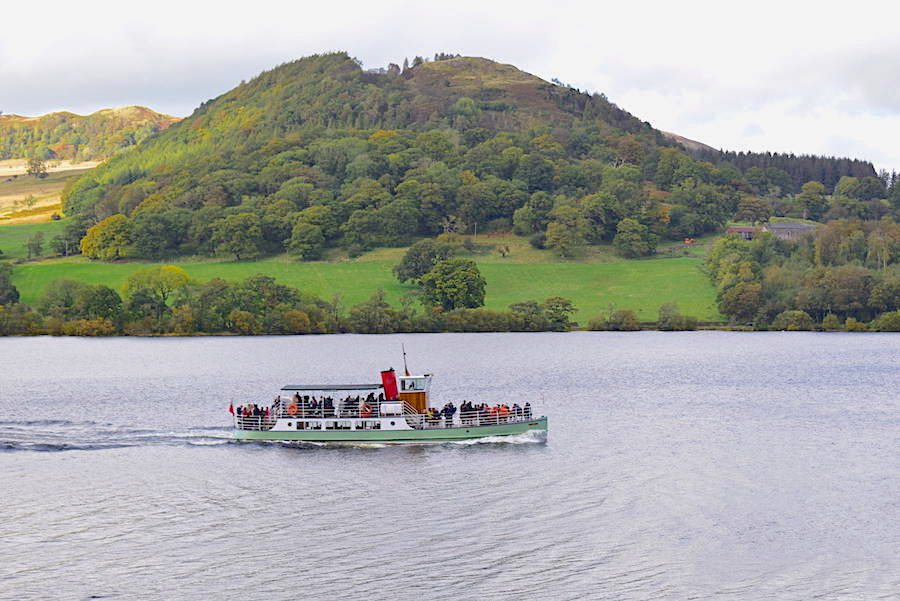 A zoom in on the M.V. Western Belle, heading for Howtown, which appeared below us as we climbed ….. 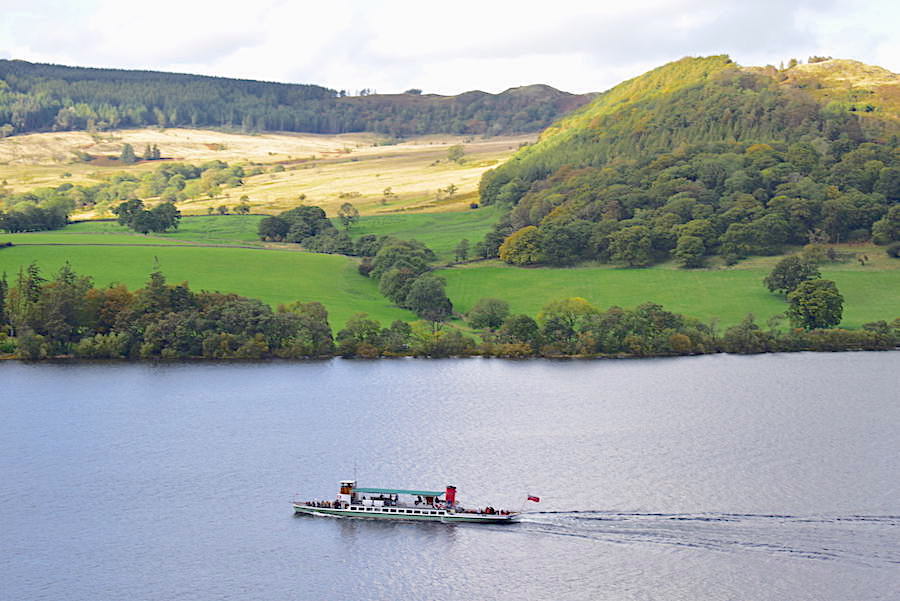 ….. and a short while later the M.V. Raven chugged into view as it headed towards Glenridding. 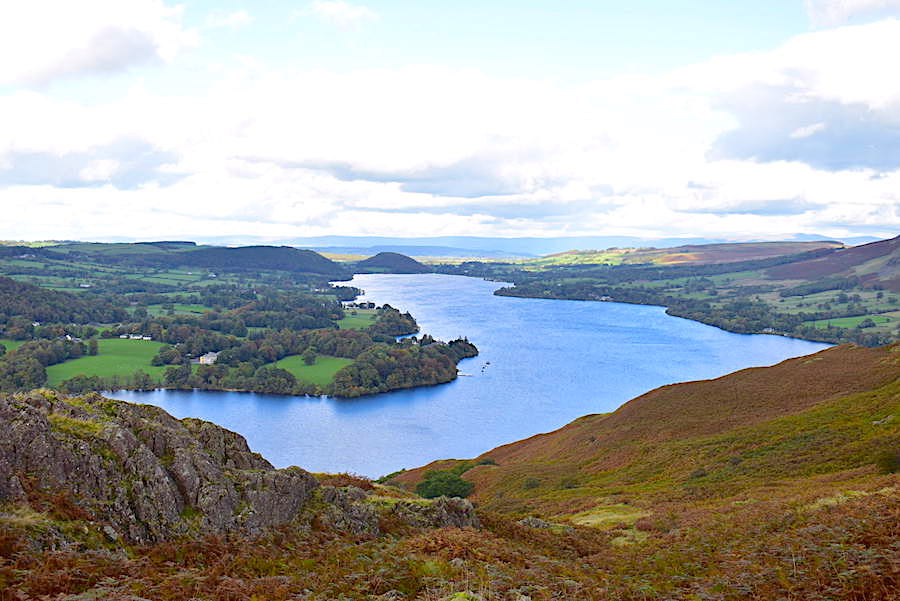 The initially steep gradient does eventually ease a little but although the bracken may have changed colour it was still upright, its fronds arching across the path and somewhat hampering forward progress as it tugged at our boots and clothing. The path was running with water at this point and lower down was a  bit muddy but on the whole it was reasonable given that we’ve had such a lot of wet weather during the last few weeks. However, the view behind us was well worth that extra bit of effort and as good a reason as any for a ‘get your breath back’ stop. 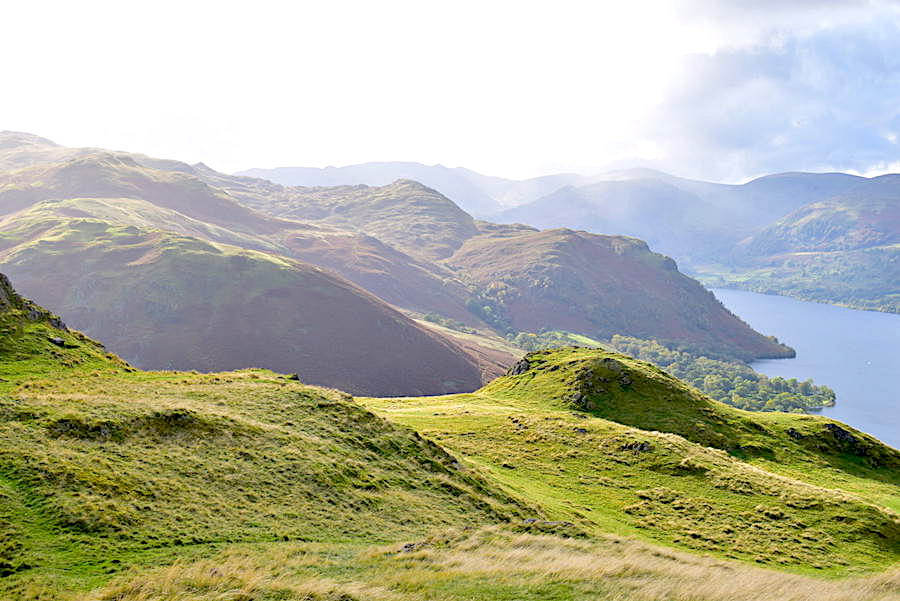 A view of the various subsidiary tops on Place Fell from just below the summit of Hallin Fell. Jutting out into Ullswater, to the right, is Low Birk Fell which rises up to Bleaberry Knott, the summit of Birk Fell. To the left of Birk Fell the pointed peak of The Knight can just be seen and on the extreme left of that I think I may just have managed to include the summit of Place Fell. Below the summit are the tops of High Dodd and Sleet Fell. From this point there are just a few more yards to walk to reach ….. 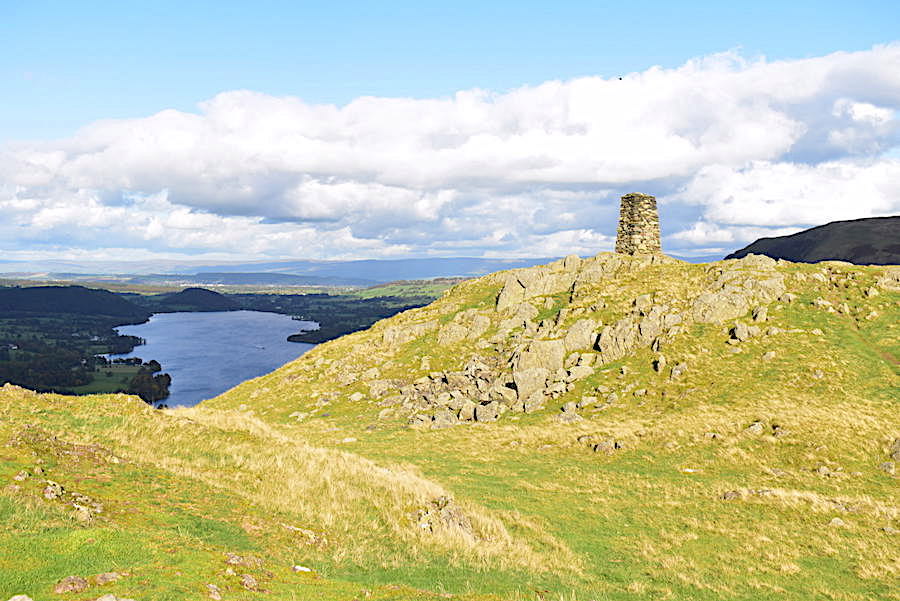 ….. the obelisk on the summit of Hallin Fell where we arrived just as a blaze of sunlight landed on it and lit up the whole of the summit area. 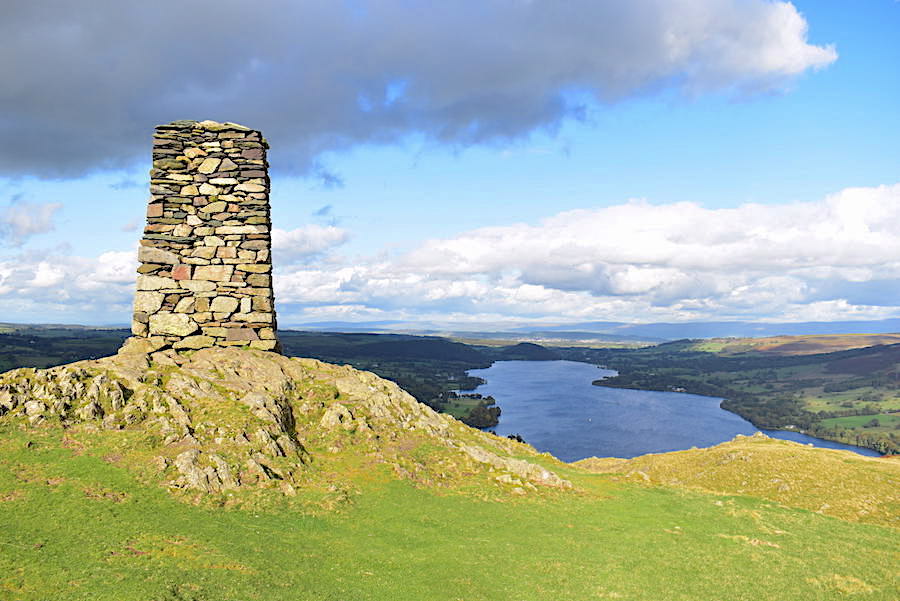 The view north eastwards along Ullswater from the obelisk ….. 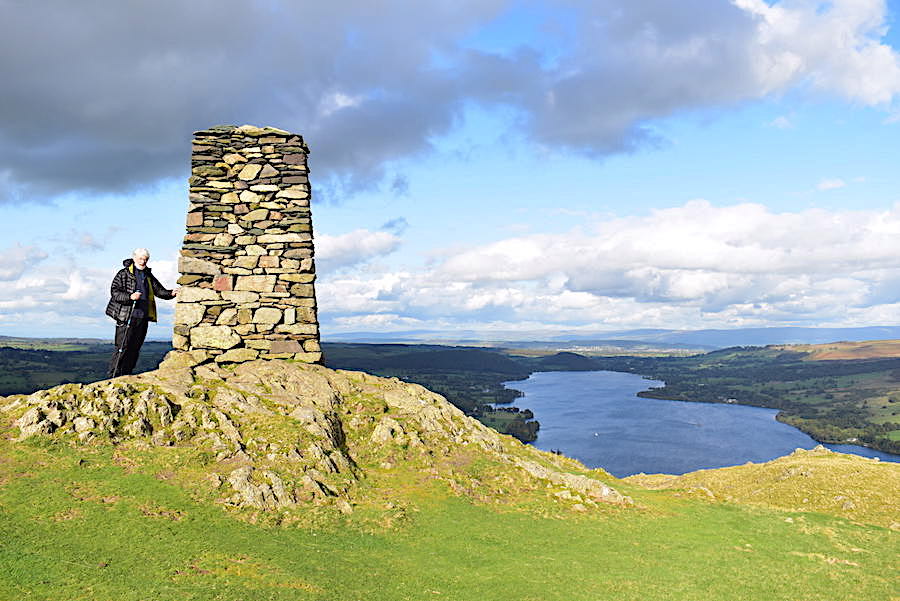 ….. and again now with J, who is just an inch shy of 6′ tall, adding some scale to the structure. 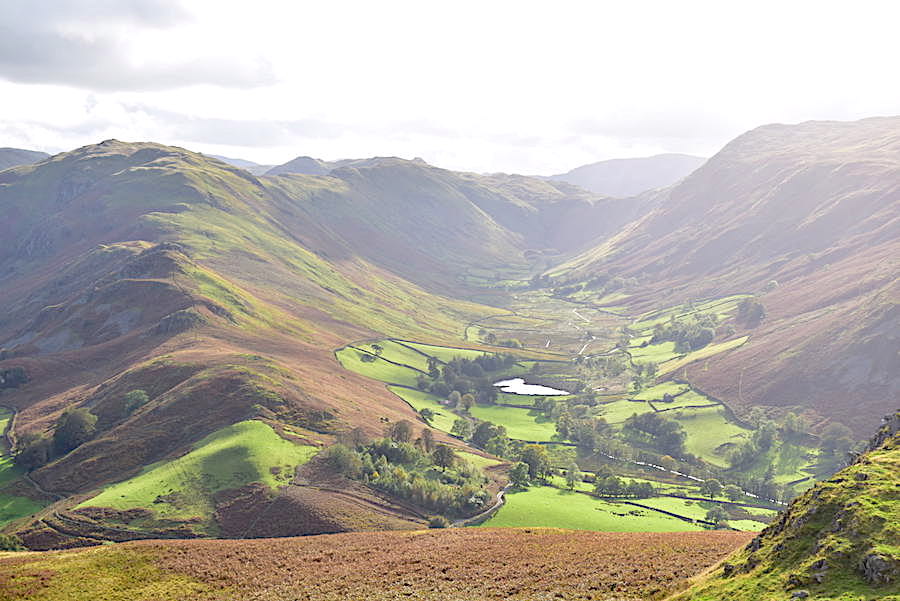 The sunlight extended along Boredale, which only a few minutes earlier had looked very gloomy indeed but was now alive with colour, detail and interest. 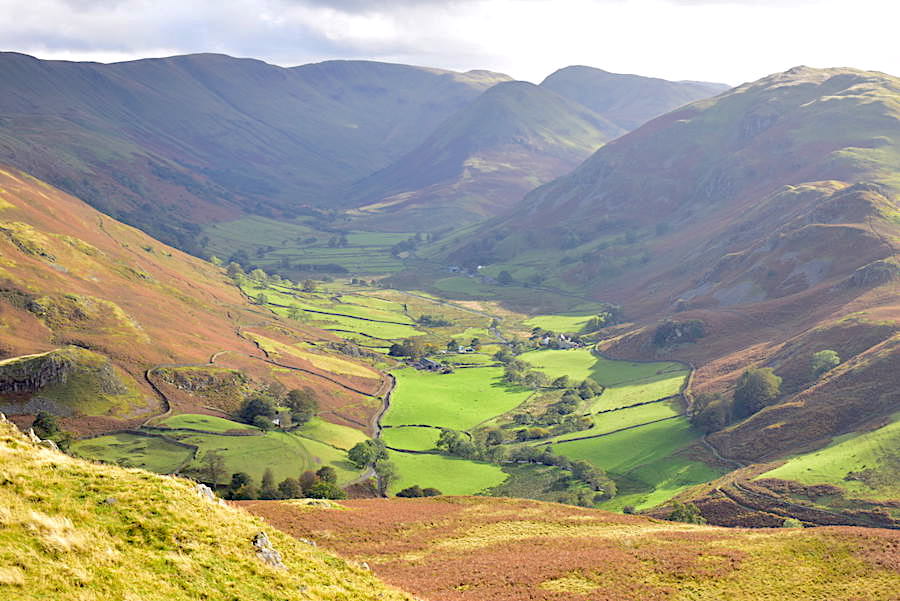 To the left and just as alive with colour is Martindale nestling between Steel Knotts on the left and Beda Fell on the right, with The Nab, in the centre. The sunlight failed to illuminate High Raise and Rampsgill Head, on the left skyline though. 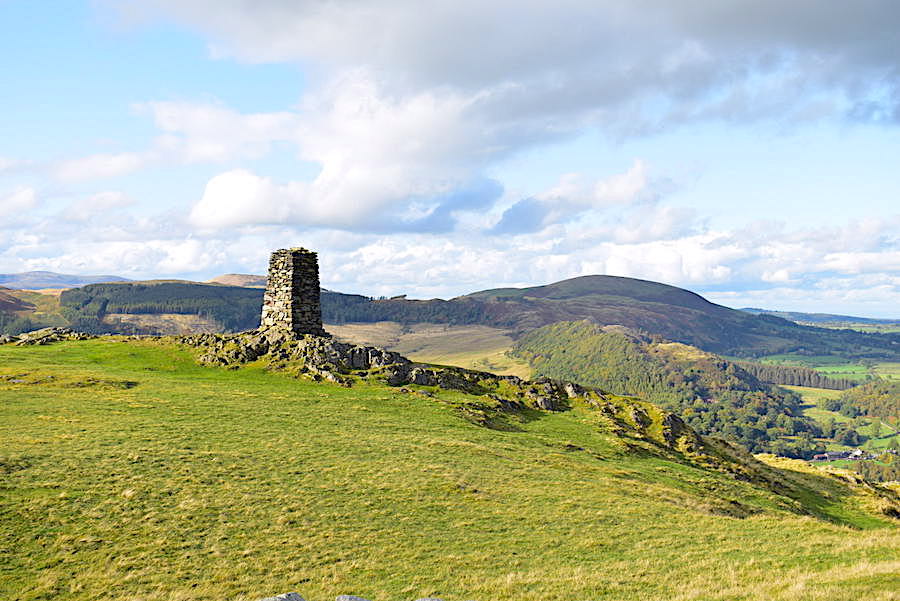 Another view of the obelisk, this time looking towards Little Mell Fell….. 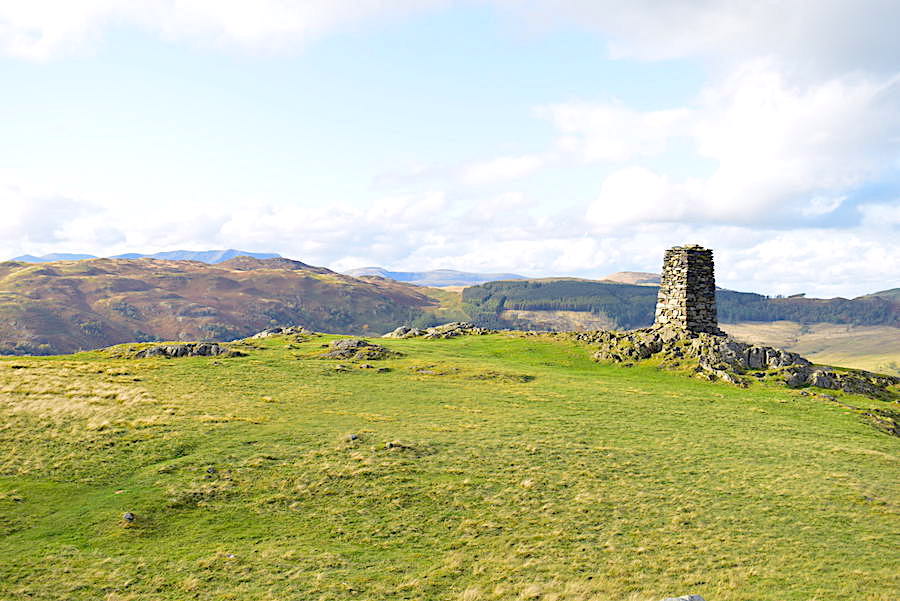 ….. and then a little more to the left where Blencathra can just be seen on the skyline behind Gowbarrow. This sunny spell lasted quite a while and was much appreciated, especially as we’ve seen none during the past week. 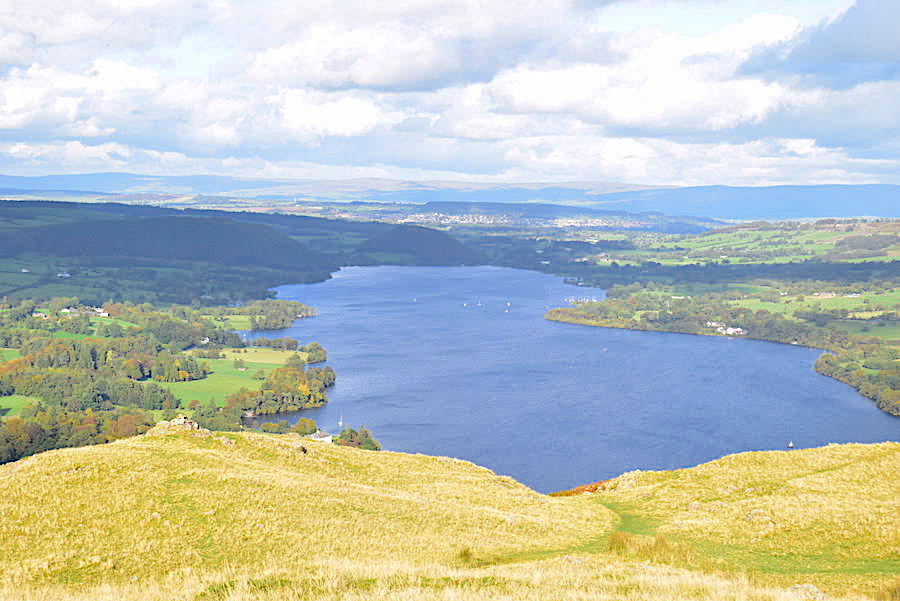 A breeze ruffled surface on Ullswater, and a good day for sailing, as I look eastwards towards the northern Pennines. 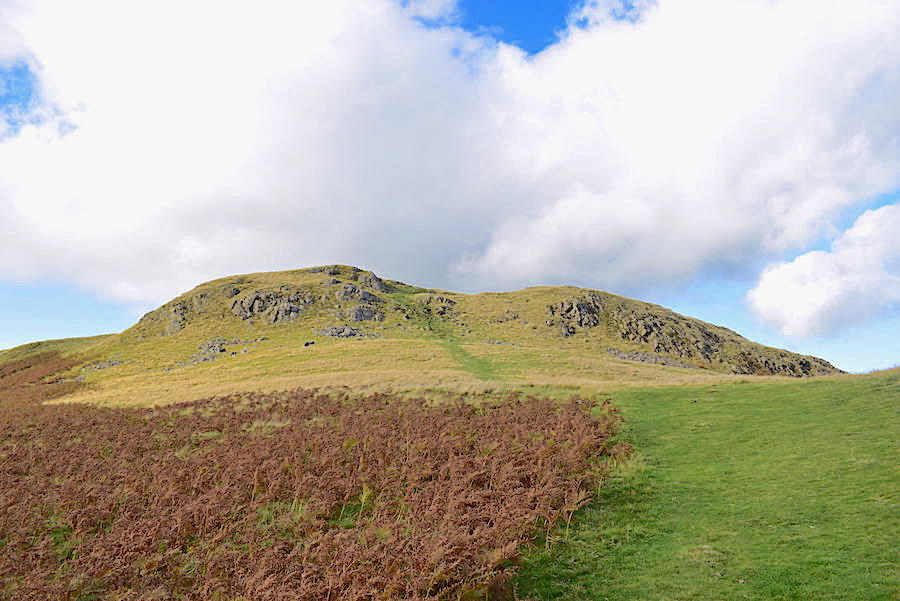 Time to descend so here’s a look back at the top of Hallin Fell as we descend via the popular path from the hause. 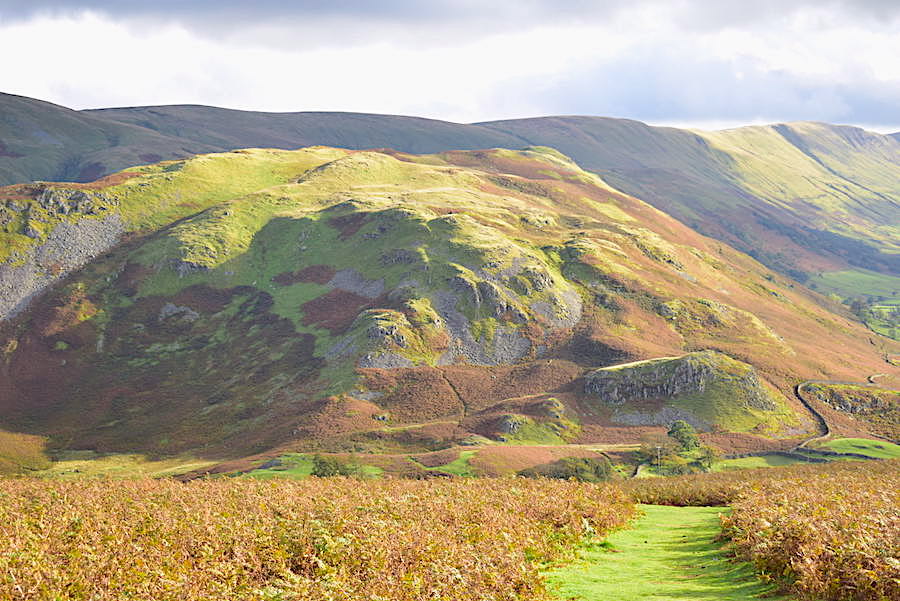 Another lovely splash of sunlight, this time falling on Steel Knotts directly ahead of us, with some of it even managing to light up High Raise over on the right. 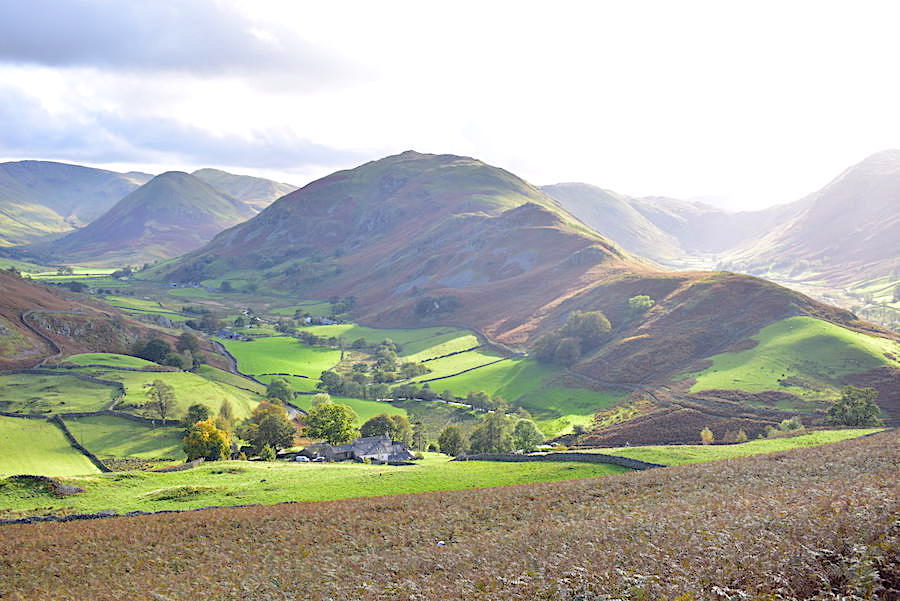 Further down the path the extent of Beda Fell becomes more apparent, extending along the length of Martindale and then on into Bannerdale. On 28th November this year it will be two years since we were up there and gazing at it brought back many memories of my brother who, I found out later when we got back home, had died that same day. They were all happy memories though and still make me smile whenever I think of them. 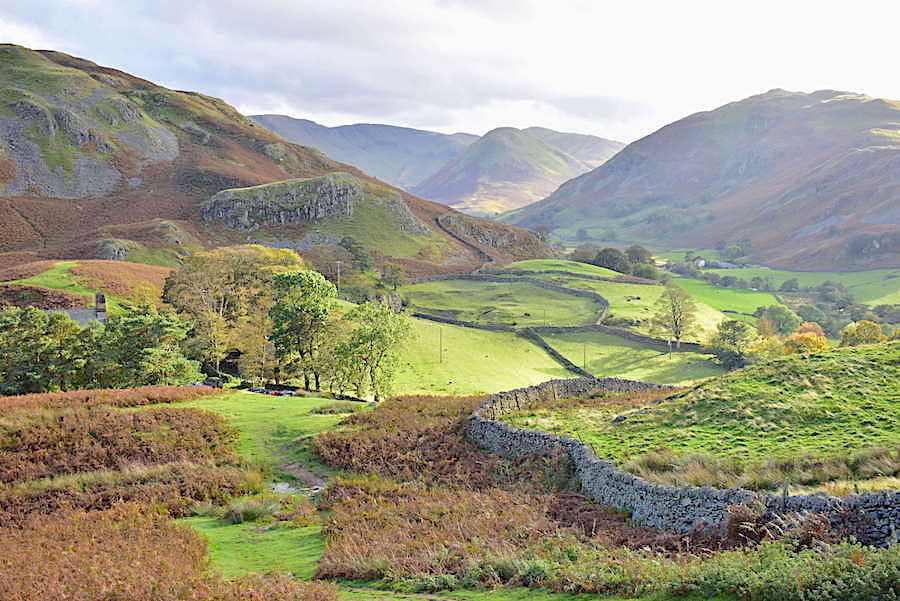 We can see the car park beside St Peter’s Church at the hause and from here it looks to be pretty full but their occupants are nowhere to be seen. We haven’t seen anyone anywhere since we came upon the large group of people back at Kailpot Crag. Wherever folks are they’ll probably making their way back down now that the shadows are beginning to lengthen. 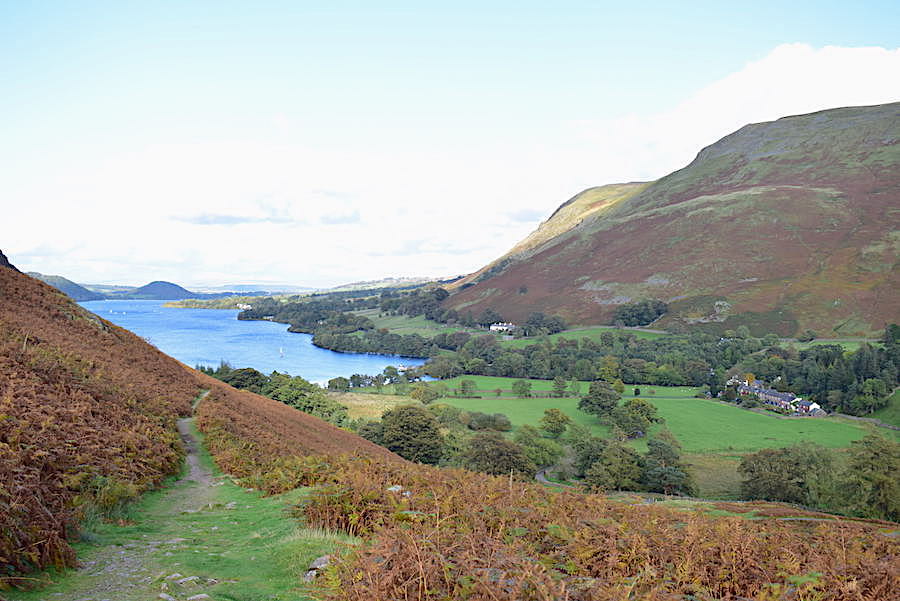 We didn’t drop right down to the hause but turned off to the left instead, preferring to walk the grassy track back to the car rather than taking to the road. We’ve lost our ration of sunlight for the time being. 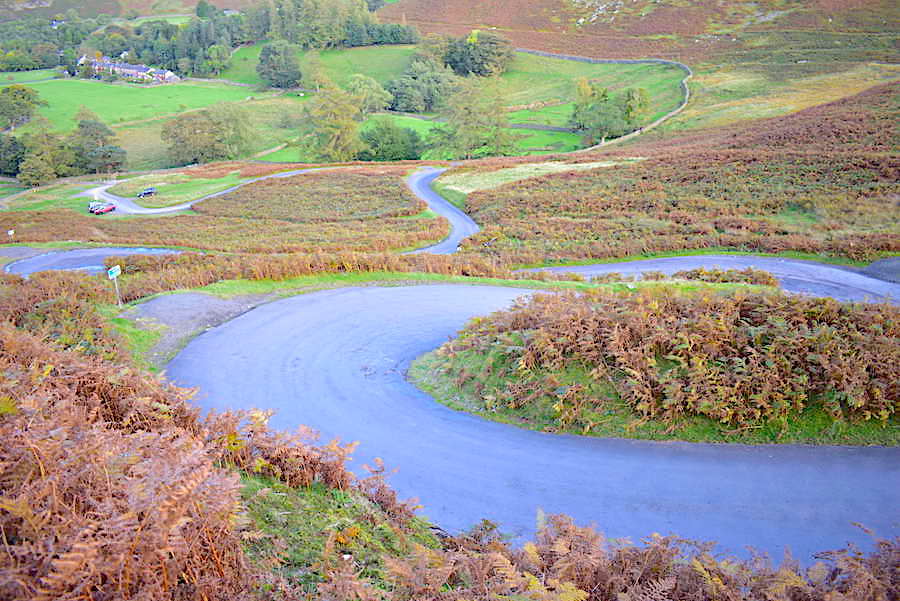 The Howtown hairpins, or if you prefer, a scaled down version of Hard Knott Pass and just as tricky in icy weather. At the bottom, on the left, our black car awaits. 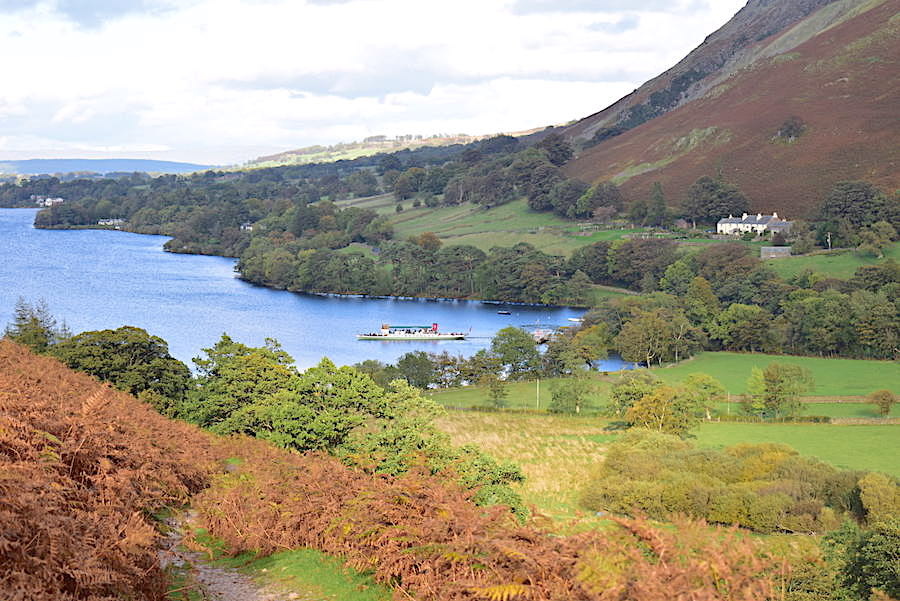 The M.V. Raven appears again, backing out of Howtown before heading down to Pooley Bridge on what will probably be its last sailing of the day. 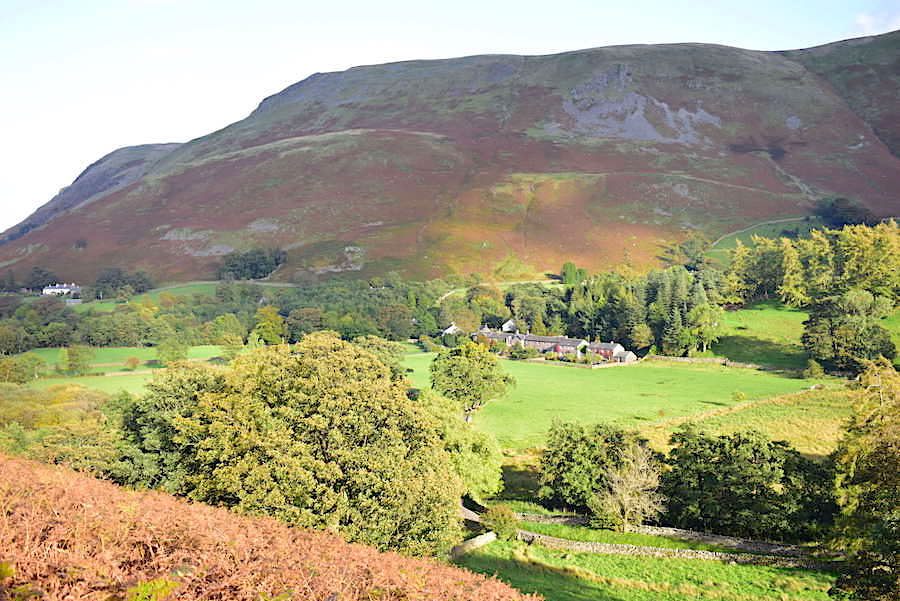 Another splash of sun lights up the Howtown Hotel and its surrounding fields ….. 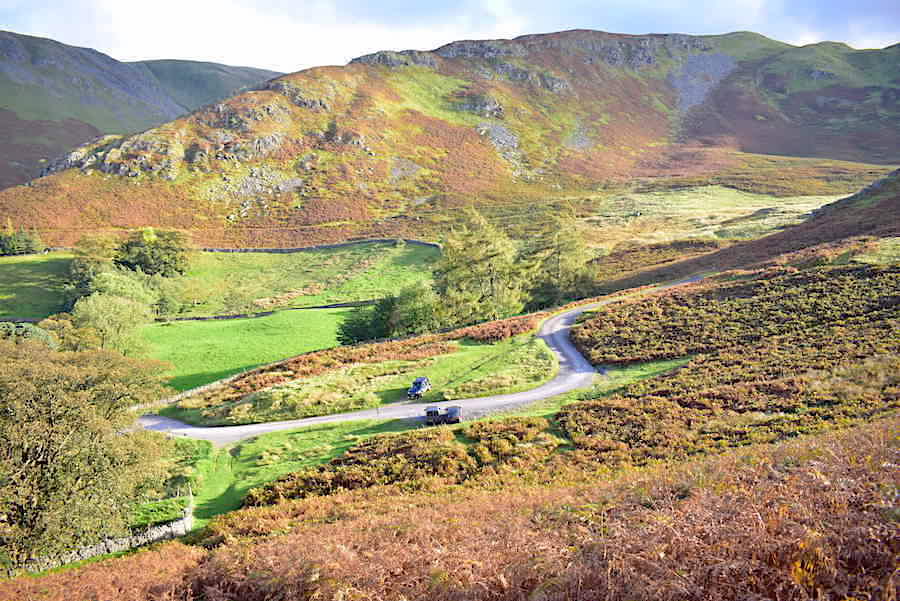 ….. together with the lower slopes of Steel Knotts and the bottom end of the Howtown hairpins where we are parked. Here we leave the grassy terrace path to follow the path through the bracken and back to the car. Well, it hasn’t been a long walk but we’ve had a couple of hours of fresh air and some sunlight and its been good to be outdoors again. Best of all, it didn’t rain, at all. Not. One. Drop.