Weather – cold and dry with some sunshine, no wind

This morning was one of those times when, in the words of Robert Burns ‘the best laid schemes o’ mice an’ men gang aft a’gley’ which was a pity because a sunny, blue sky day came along. As a result it was well past one o’clock before we were able to put it to good use.  As I mentioned in my last post it snowed for most of the day yesterday, it stopped just as the daylight disappeared. The skies cleared and a severe overnight frost followed so the snow covered landscape was more than a little crisp this morning. What with one thing and another we only had time for a short local walk today. Just an out and back to Sleddale Hall but an enjoyable couple of hours in some very bracing fresh air.

An out and back walk starting at Cooper’s Green below Wet Sleddale reservoir and, after crossing the river Lowther, walking the tarmac access lane to its end point at Sleddale Hall and returning, more or less, by the same route. 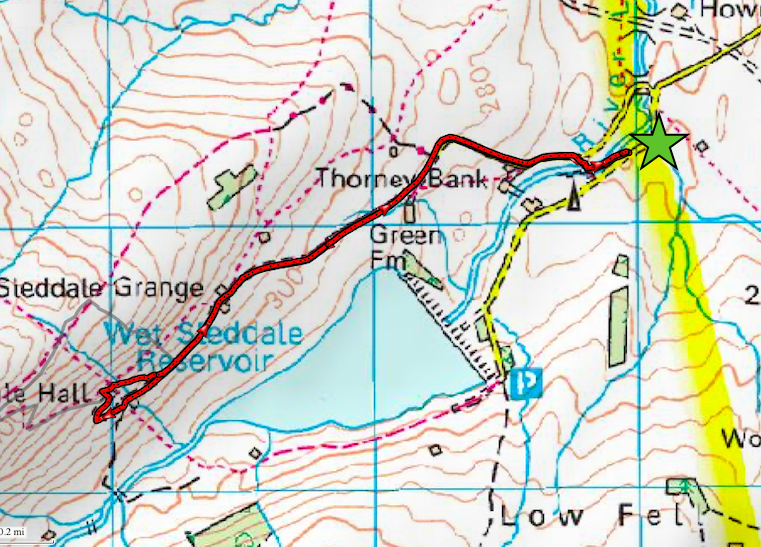 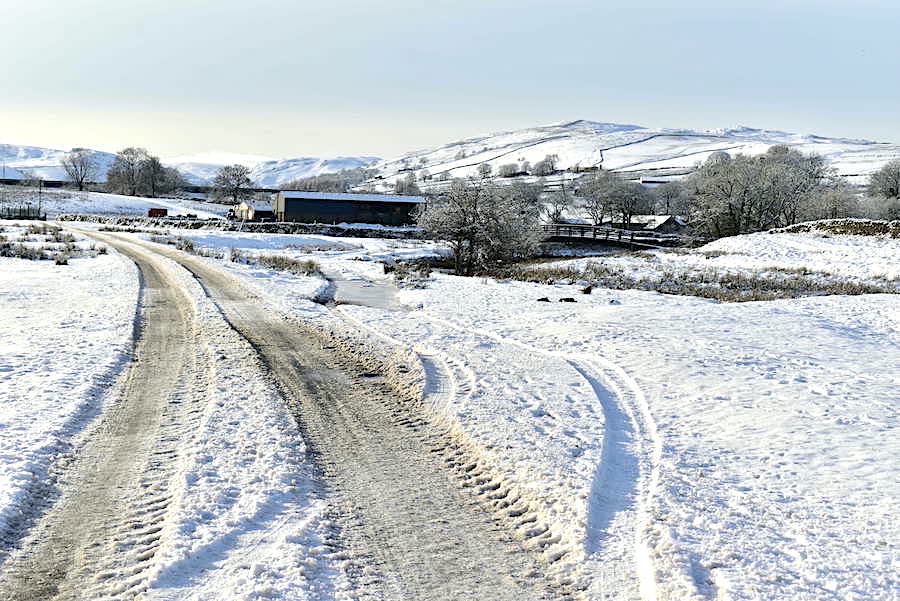 The buildings of Green Farm from Cooper’s Green, beyond them are some of the fells overlooking the valley of Wet Sleddale. The sun has had little effect on the compacted and very icy snow on the access road. 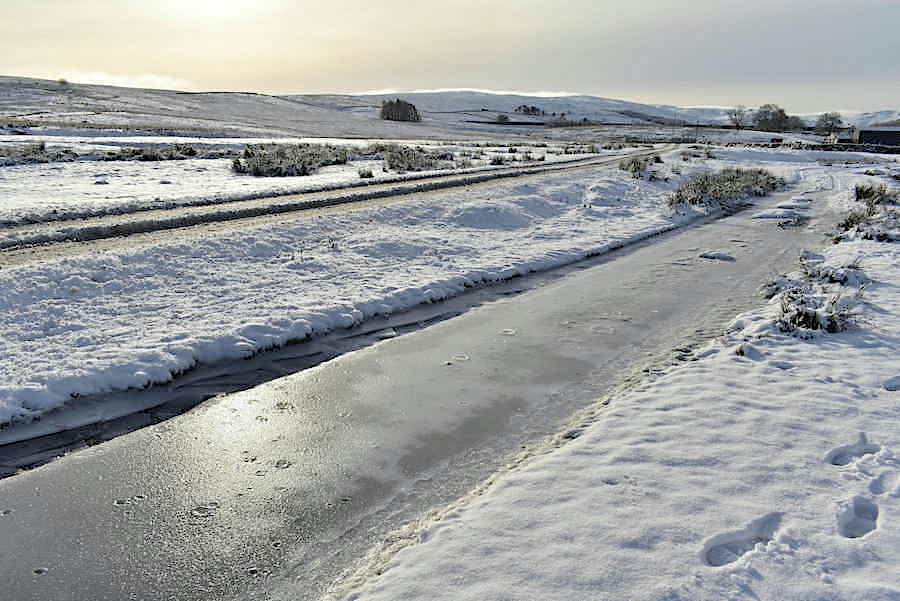 The glassy surface of another access track. We kept to the grassy edges obviously. The layer of thick white cloud above the fells in the distance would suggest that an inversion is going on over there, much like what we saw during our walk over Loadpot Hill on 6th January. We could also see the same thing happening in the valleys between the High Street group of fells on the way here. 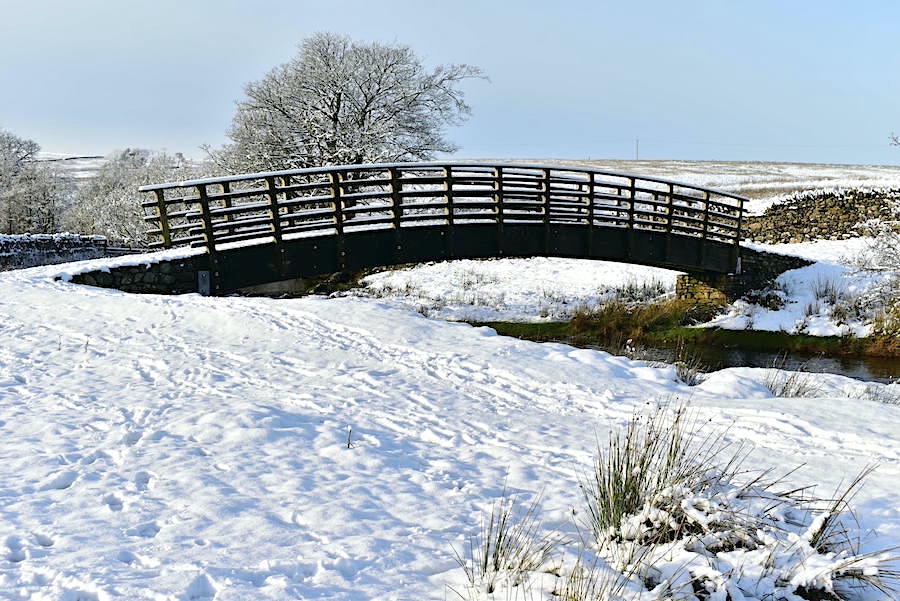 Across the deep crunchy snow to the bridge ….. 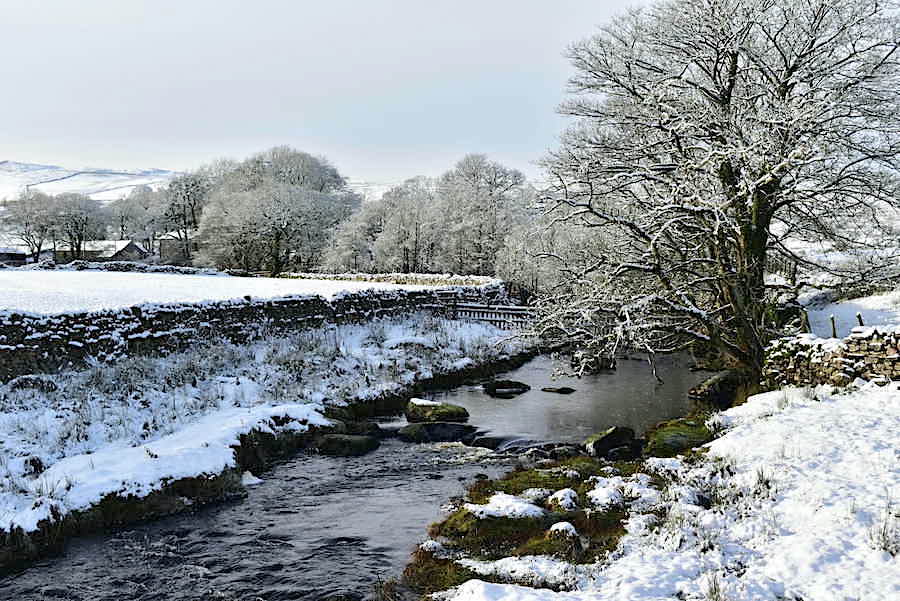 ….. with a brief pause on the bridge for a shot of this chilly scene. 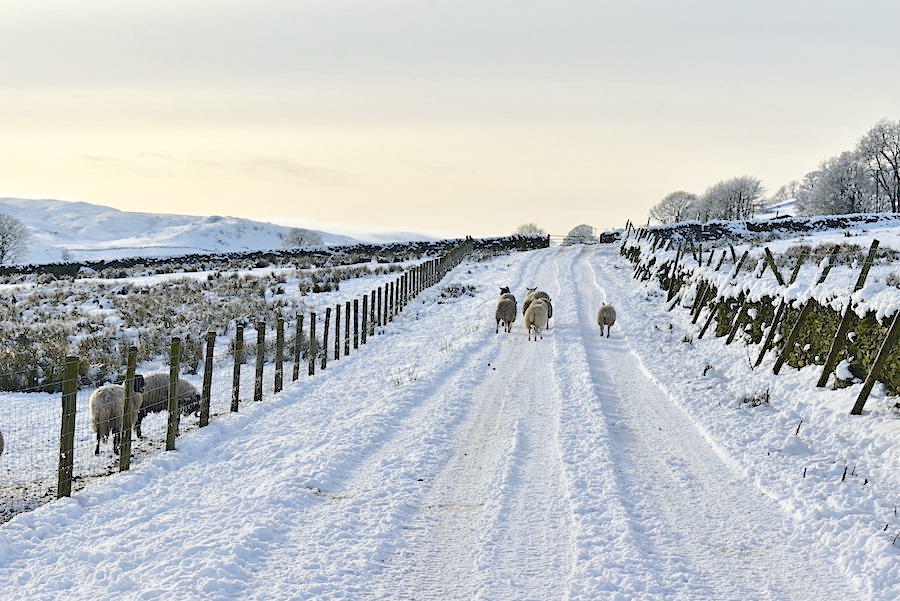 When we reached the icy and well compacted access road our spikes went on. Making any sort of progress without them was almost impossible, unless you were a sheep. Our fellow travellers had no difficulty whatsoever, not even a slither from any of them. As we went up the road more and more sheep joined this little group and by the time we reached the gate at Sleddale Grange we had gathered quite a flock of them. They were probably hoping that we were bringing food, alas, they were to be disappointed. 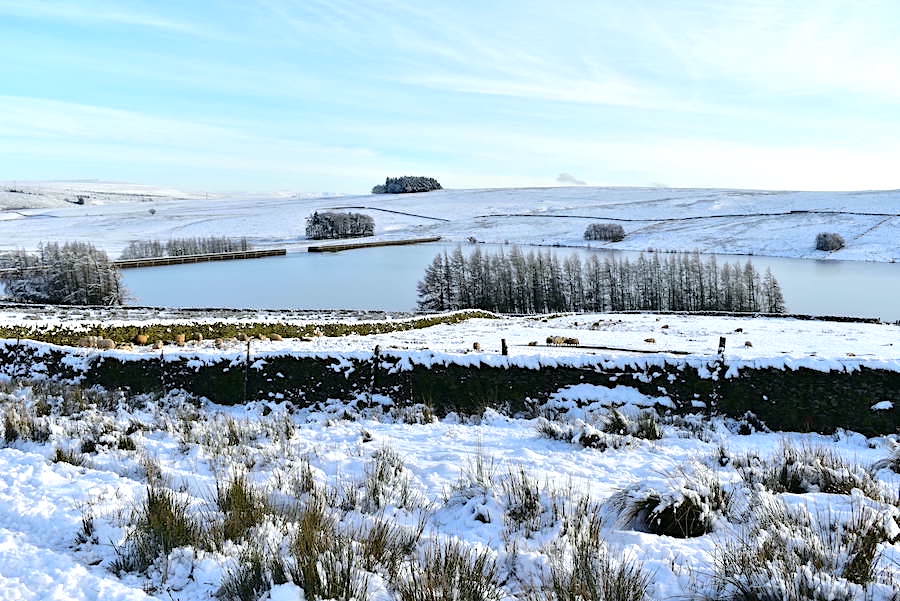 A look over my shoulder towards Wet Sleddale reservoir ….. 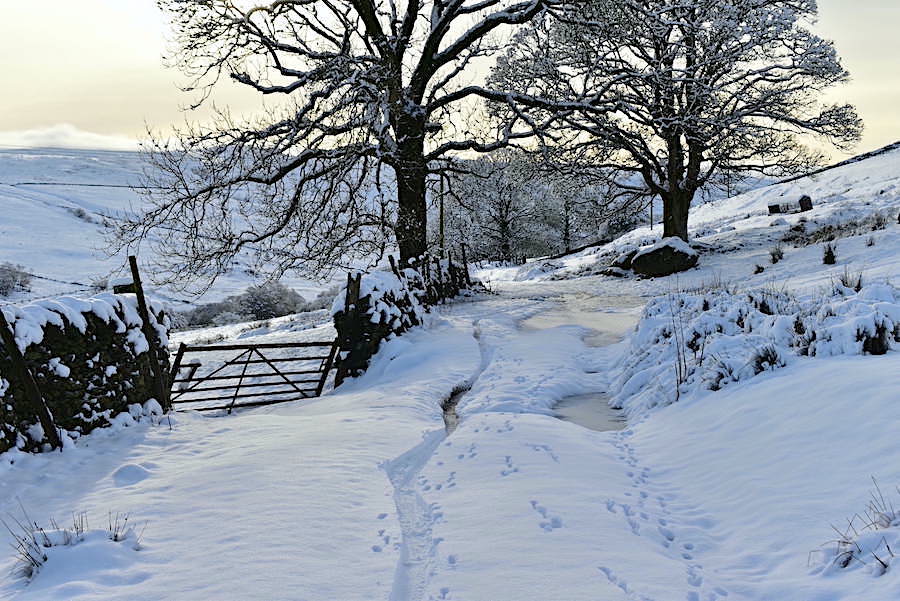 We’ve just passed beyond Sleddale Grange where the herd of sheep were left staring disconsolately through the gate. The tarmac has given way to what is normally a grassy/pebbly track but that lies hidden beneath the snow today. The thick single line in the shot looks to have been made very recently by a bike with very sturdy tyres. Further along it was interesting to see that for quite some distance the rider must have had difficulty in maintaining balance because the toe ends of their boots could be seen on either side of the tyre track. Apart from those, and lots of deer hoof prints, no-one else had been along here since the snow fell. 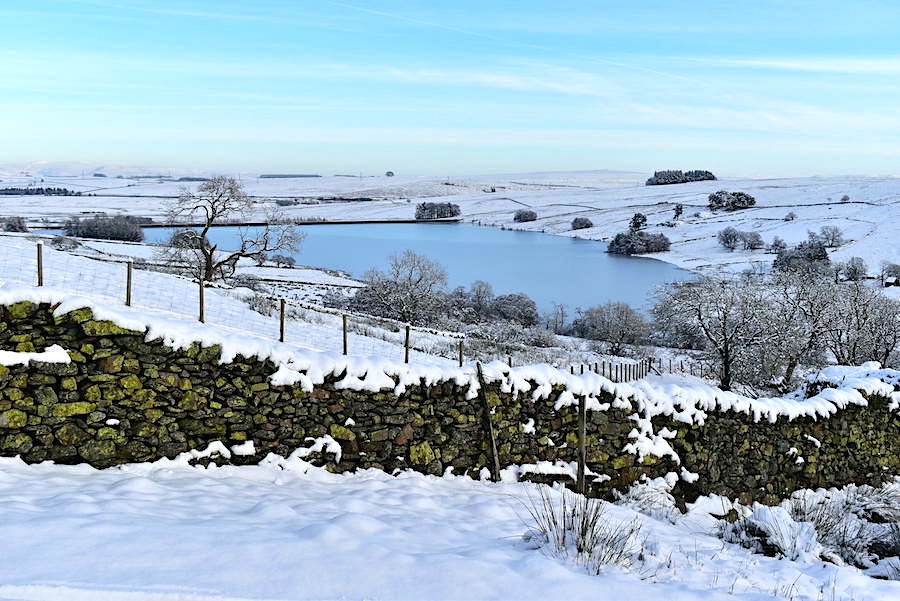 Another view of the reservoir from Sleddale Hall. I had just taken this shot when another couple appeared. They were making their way up the hill towards the Hall from the path around the reservoir so we all had a quick chat before parting company. 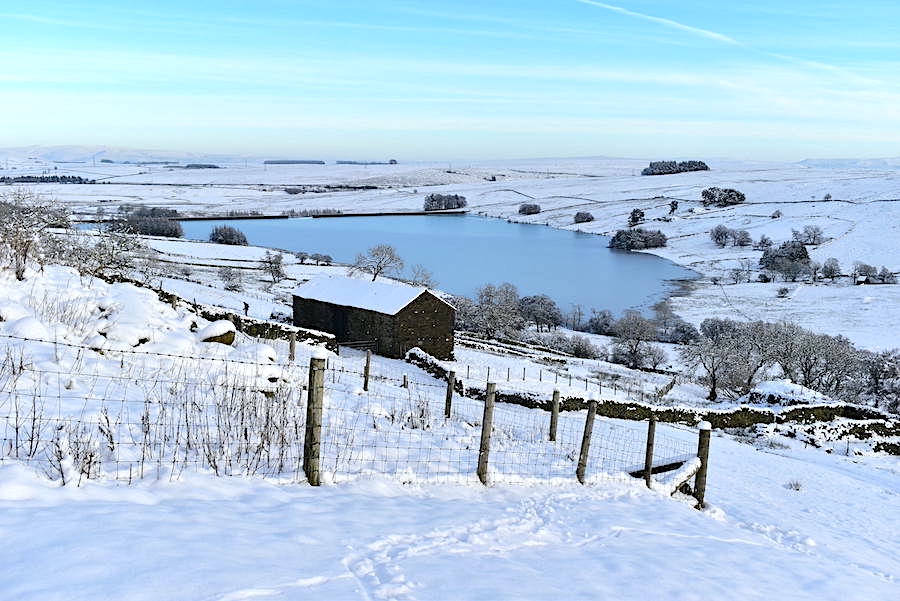 The couple made their way back to Cooper’s Green via the path we had just been using and a zoom in will reveal the one of them standing just to the left of the barn. We followed the path up to the Hall ….. 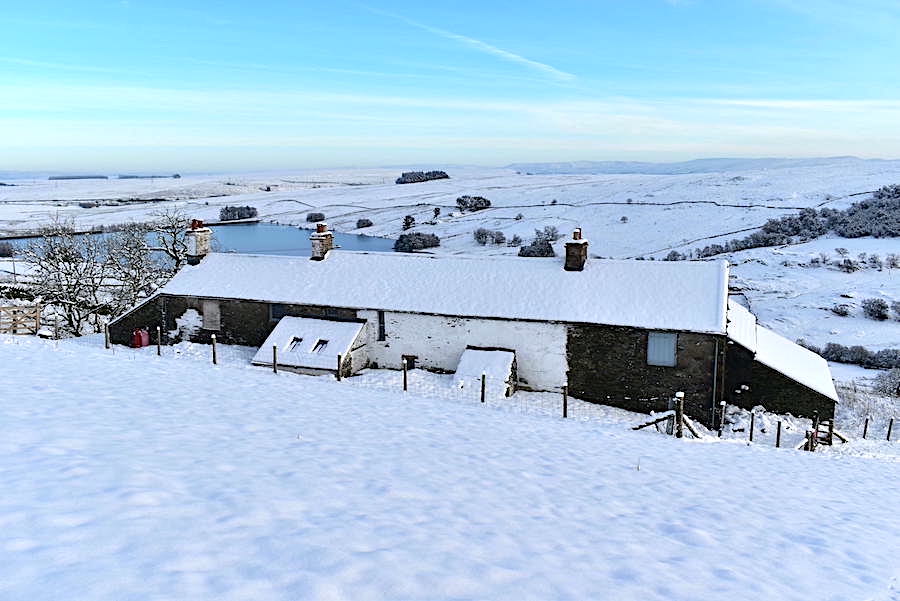 ….. and I took a shot of the rear of it before we also began making our way back. No-one in residence there at the moment. 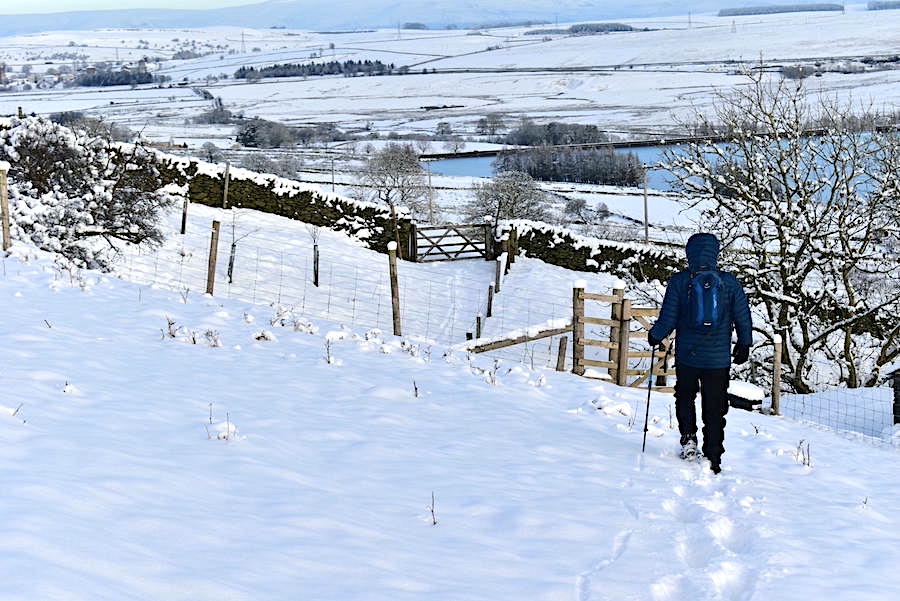 J ploughs across the pristine snow heading towards the gate and I make use of his footprints. We’re still wearing the spikes which are more of a hindrance than a help in this stuff. The snow quickly packs up around the spikes and you end up walking on what feels, and looks, like tennis balls, very wobbly walking ensues. There was little point in taking them off because in a few more minutes we’ll be back on the icy path again where they’ll definitely be needed. 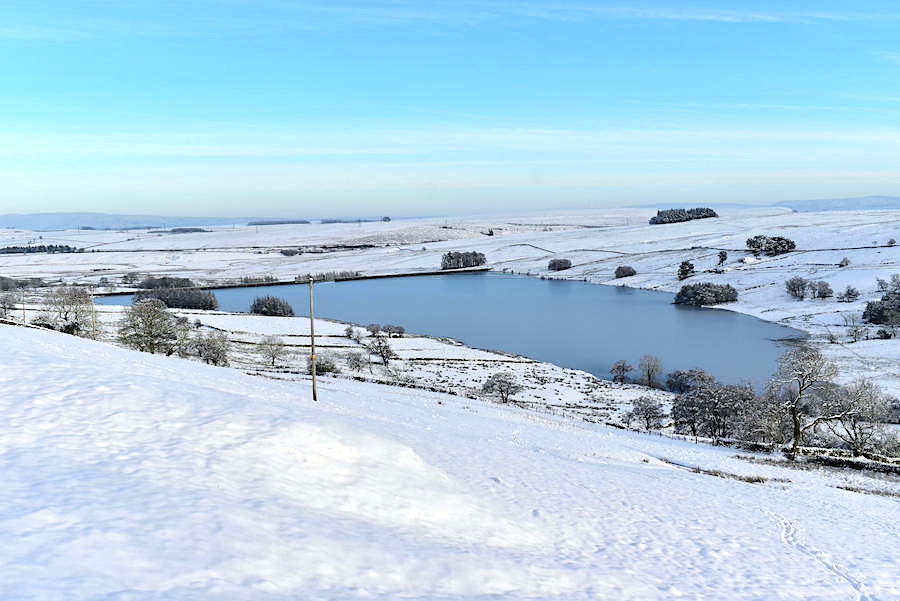 Wet Sleddale reservoir as we drop down across the fields from Sleddale Hall. A thin veil of cloud diffuses the sunlight. 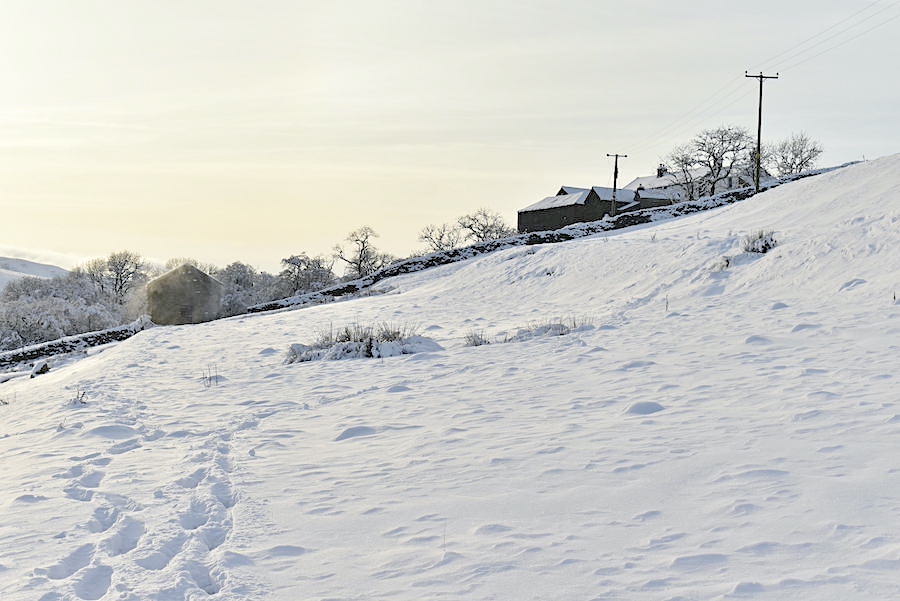 A look back at Sleddale Hall as we drop down the field and pick up the bootprints of the two walkers we had just been talking to. 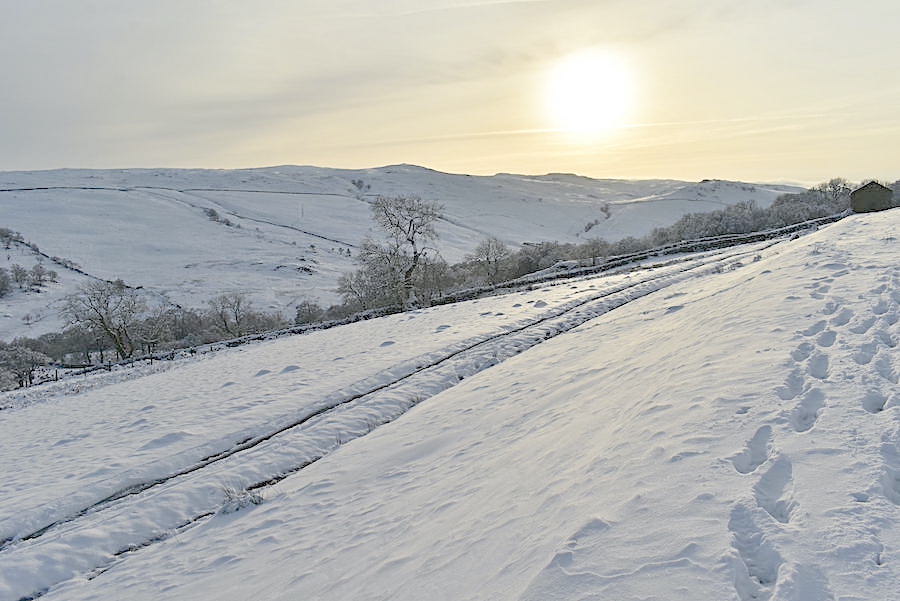 A look back along the valley of Wet Sleddale, bathed in a glow of atmospheric light, as we reach the icy footpath again. 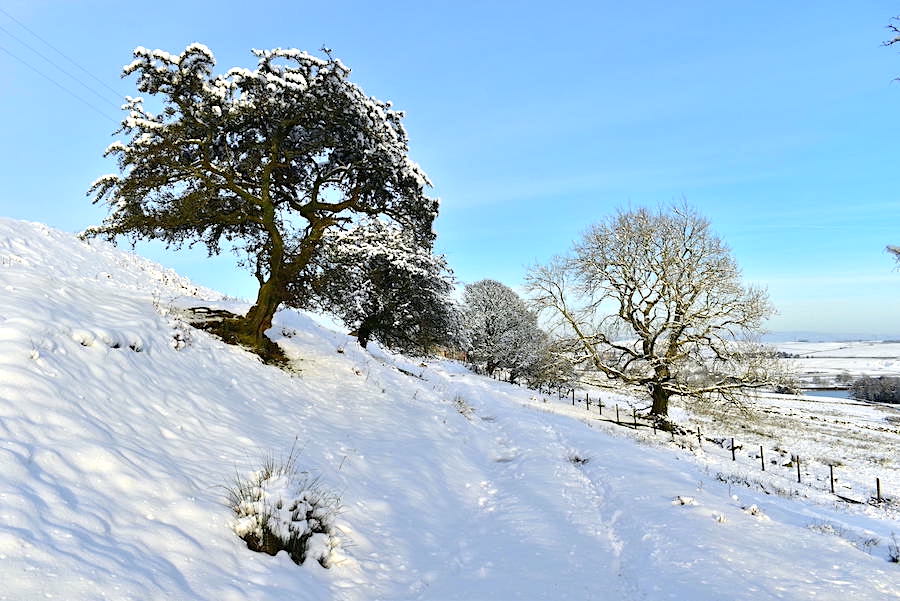 Back on the footpath now, although its hard to discern from the shot, and heading back towards Sleddale Grange. 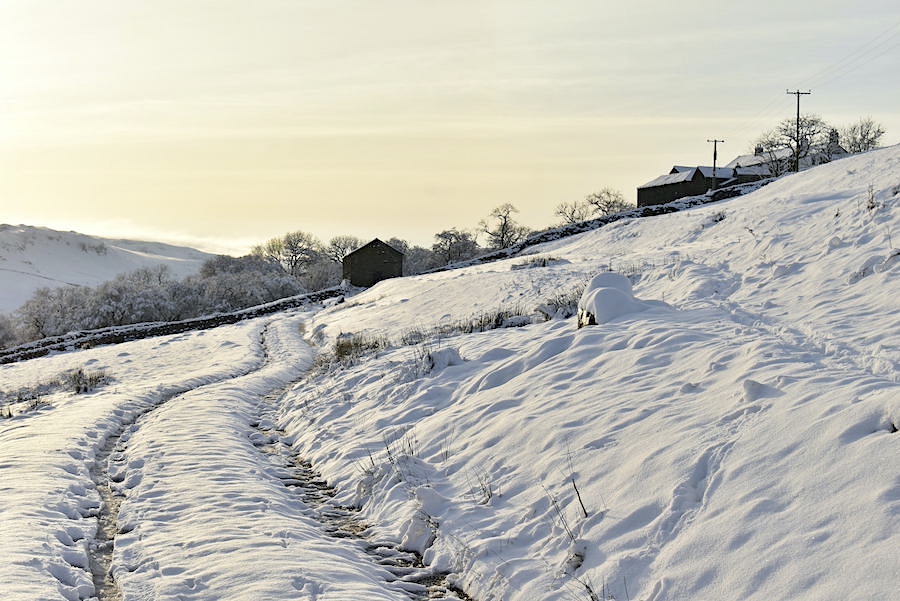 A zoom in for a look back at Sleddale Hall. 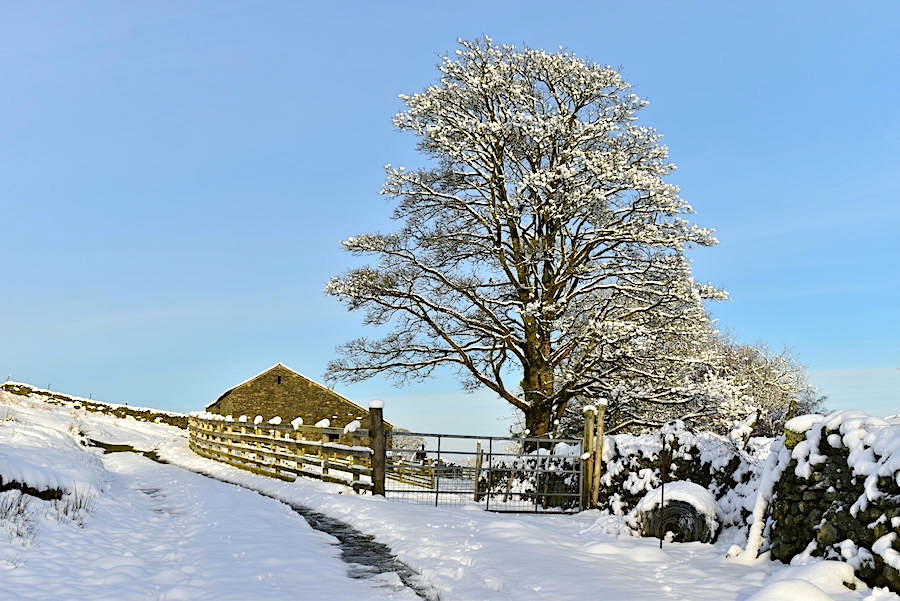 Approaching one of the barns at Sleddale Grange ….. 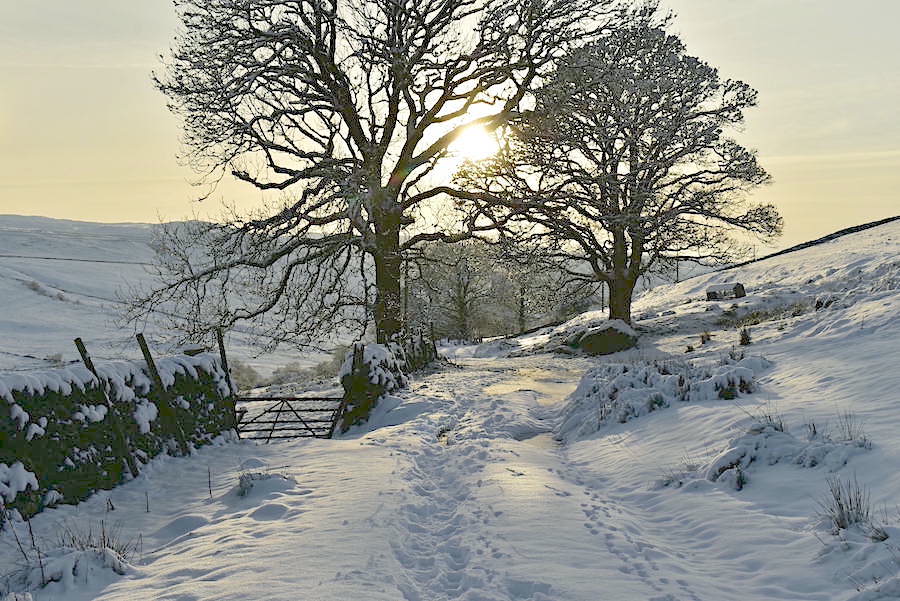 ….. and a look back before we leave the frozen path and take to the frozen road again. The flock of sheep was nowhere to be seen when we reached the gate. 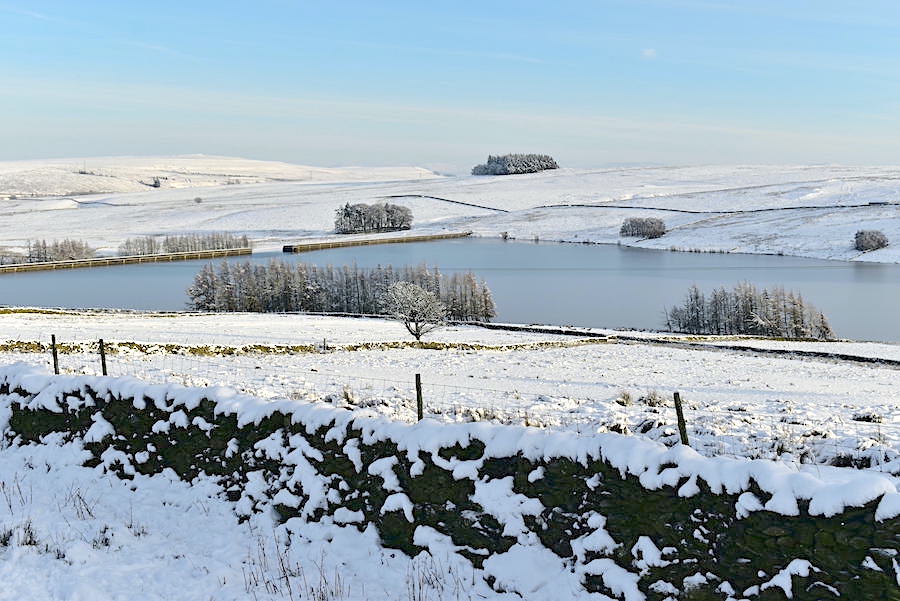 Making our way back down towards Green Farm with a look over towards the reservoir along the way. 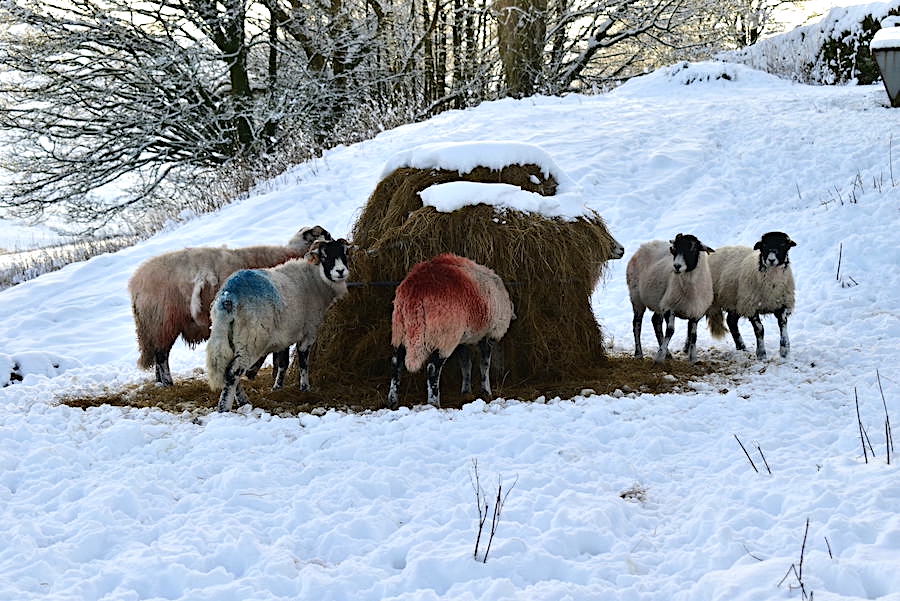 Hungry sheep in a field alongside the wall. 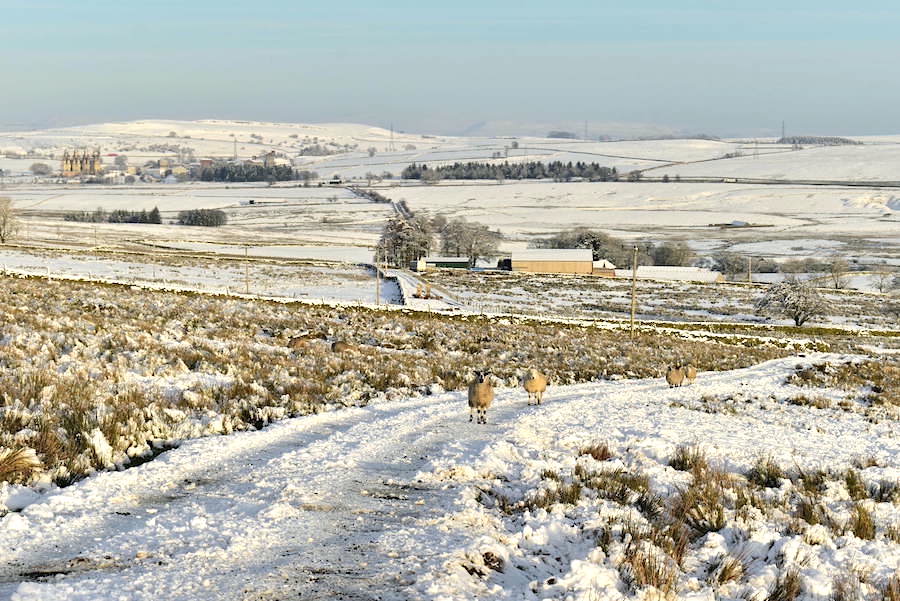 We have company again as we make our way along the road. These sheep have also had hay put out for them but they’ve eaten it all. Just a few stalks were littering the ground where the bales had been placed a couple of hundred yards behind me. Meanwhile, they’ll have to make do until the next delivery slot. 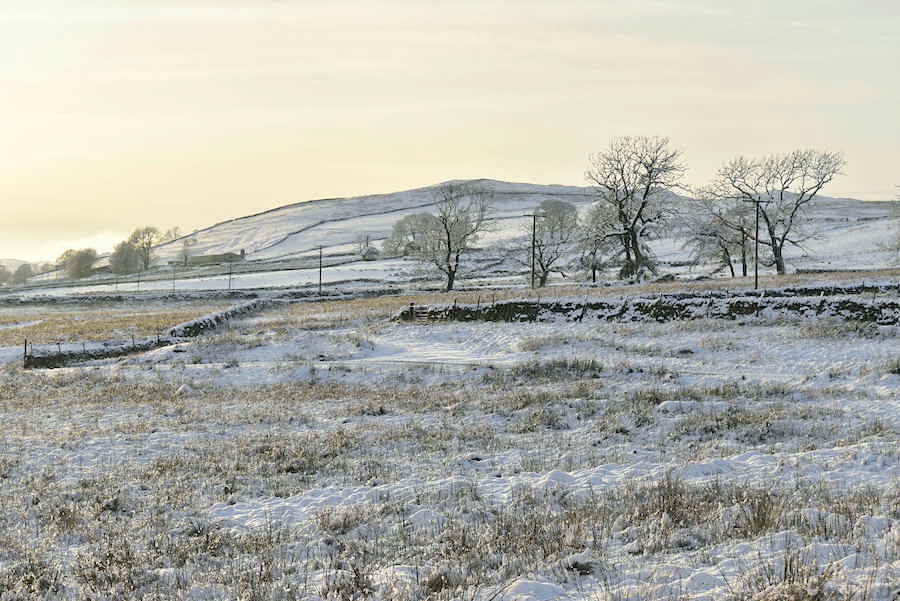 A look back towards Seat Robert and its neighbours from the road. 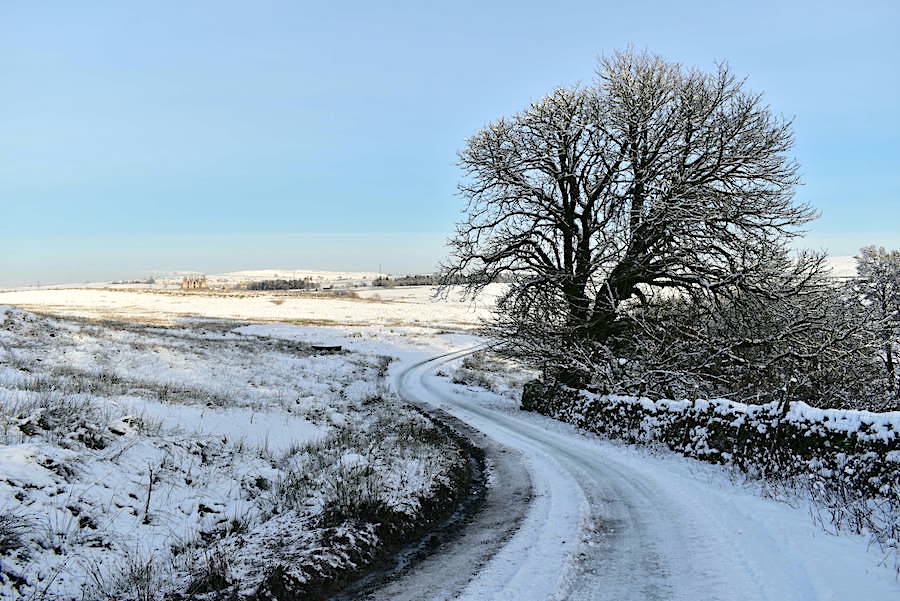 The view ahead as we walk down Thorney Bank. The four chimneys of the Tata cement works at Shap are just visible on the left skyline. 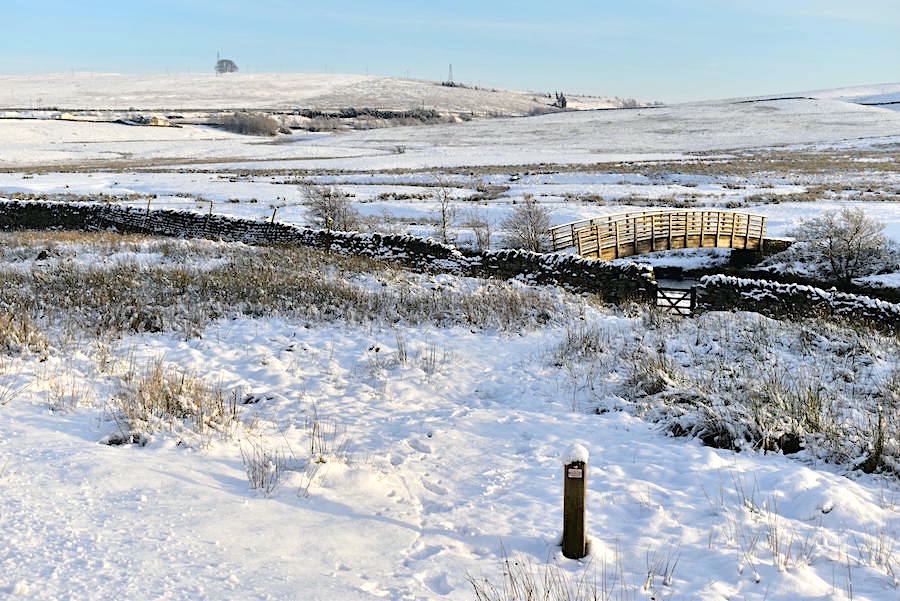 Back at the signpost so we leave the road and drop down to cross the bridge. 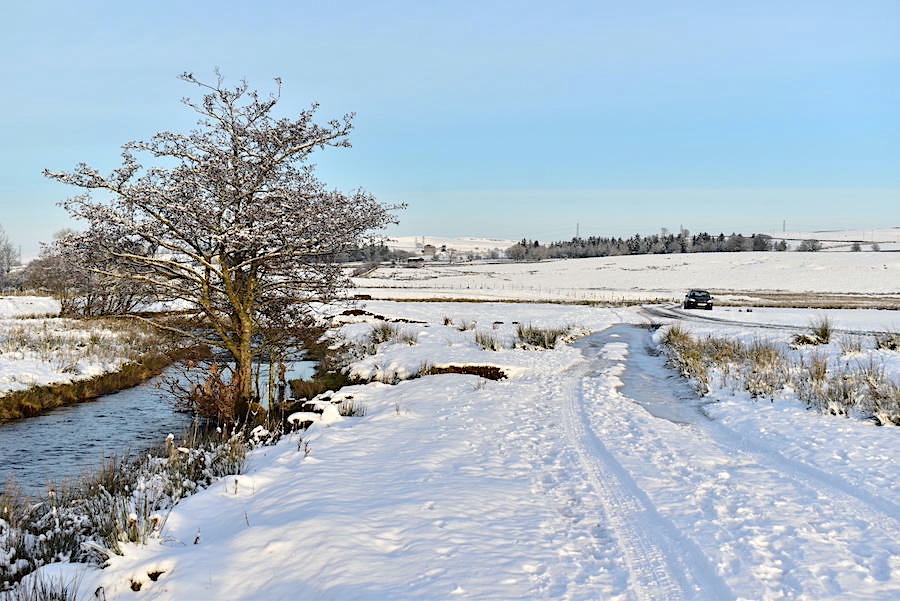 From the bridge its just a short walk back to the car where we knock the snow and ice from the poles, gaiters, and spikes, stow it all away and take it home for cleaning and drying. Yes, its all a bit of a faff but would we really have it any other way? No, of course not because its what winter walking is all about: warm clothing, woolly hats, scarves, gloves and mittens, snow and ice crackling and crunching beneath your feet, chilled faces and red noses. Which reminds me, I know somewhere, about ten minutes from here, where we can get a good cup of tea so that’s where we’re going.