Yesterday’s walk around Hallin Fell reminded us that we last walked up Steel Knotts in 2014 so, as today’s forecast was a bit on the gloomy side, we decided to spend a couple of hours walking up there this morning. Its near home and of modest elevation so we were unlikely to be up in the cloud, although there wouldn’t be much we could do about any of the forecasted sleety showers which might come our way. 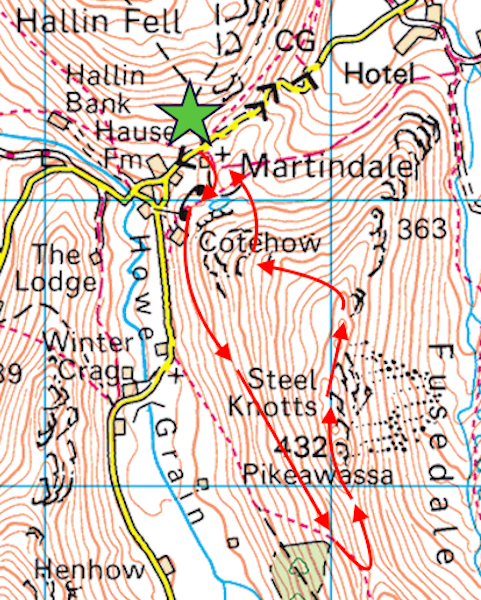 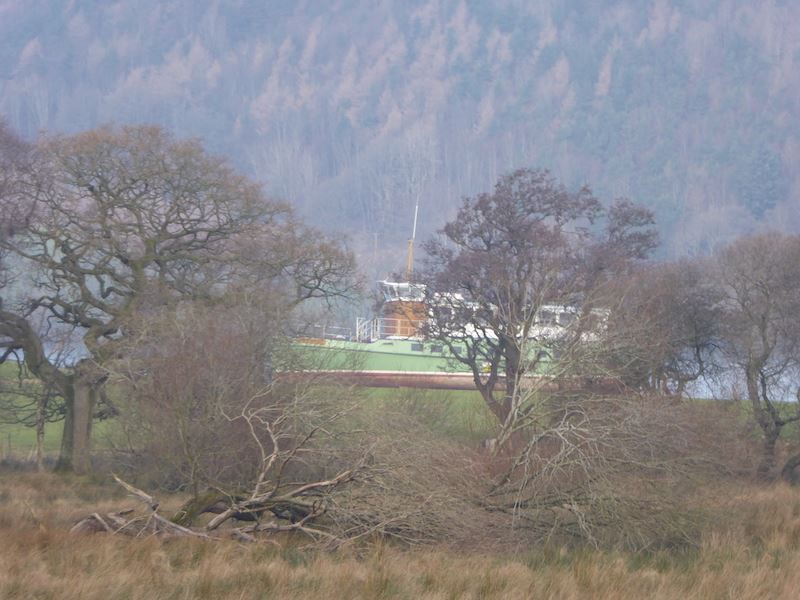 On the drive to Howtown I caught sight of one of the Ullswater steamers, ‘The Lady Wakefield’, beached during Storm Desmond. The crew themselves then had to be rescued. The vessel is damaged and likely to be out of action until April this year. 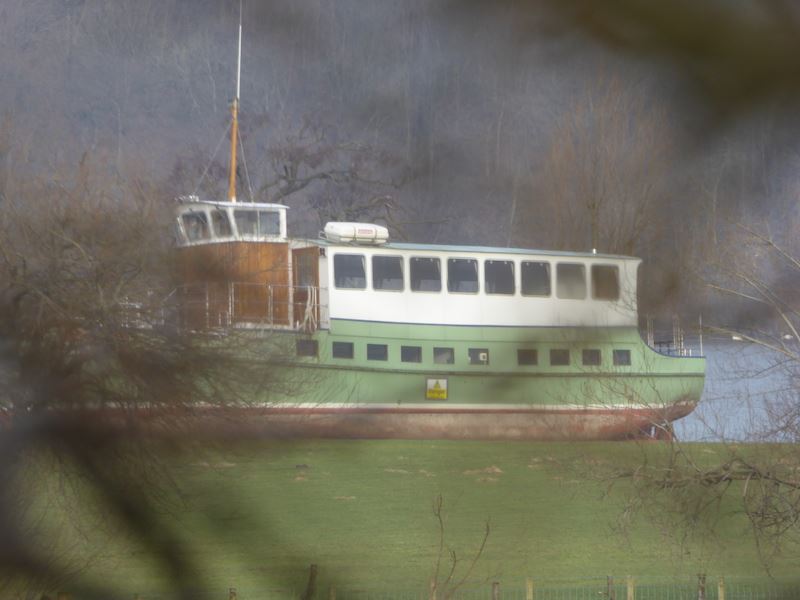 A close up of the vessel through a gap in the hedge. 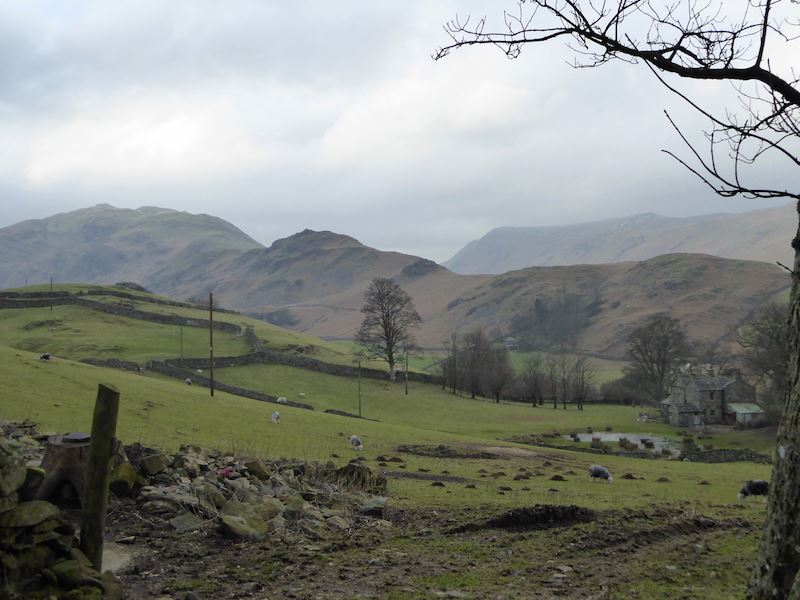 We drove on up the Howtown hairpins to St Peter’s Church car park from where you get this view of Beda Fell. 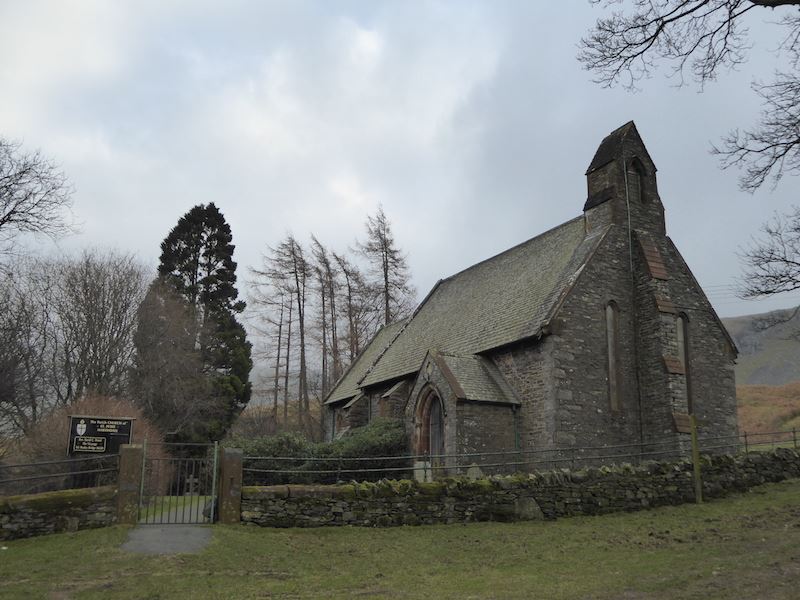 Right behind us is St Peter’s Church, Martindale where we were yesterday. 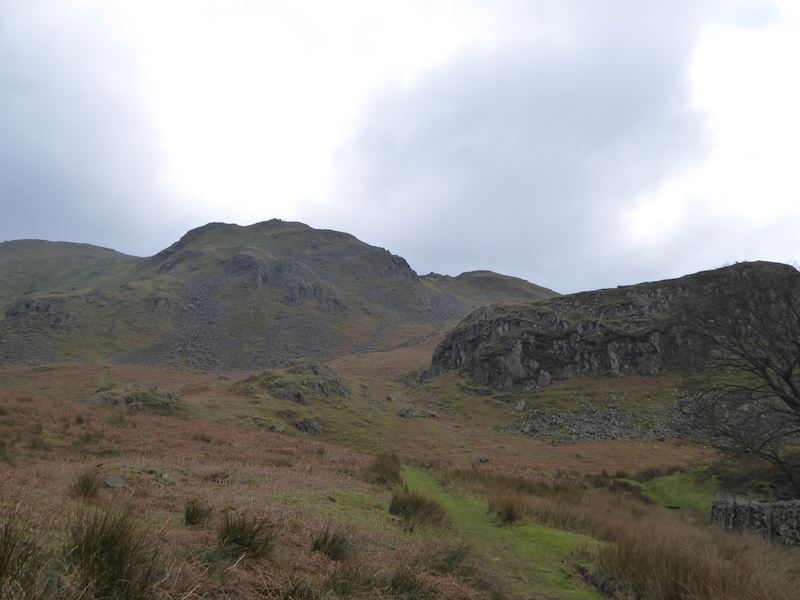 Towards the left is the path to Steel Knotts via Birkie Knott, we’ll be using that as our descent route later on. 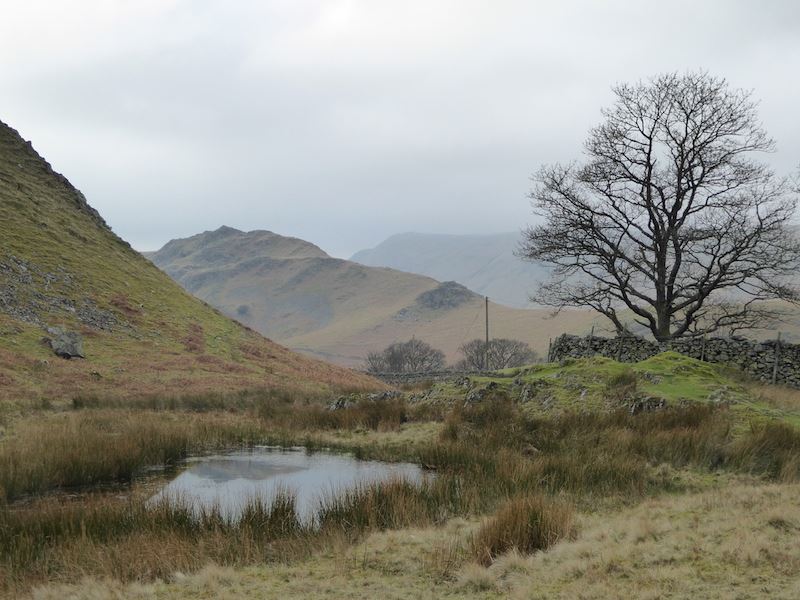 Our route to the summit takes us past Lanty Tarn with Beda Fell behind. 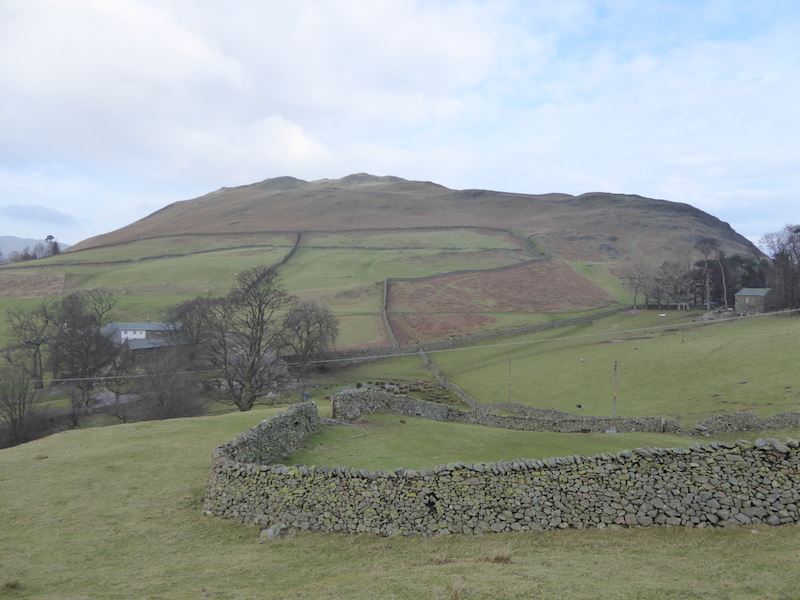 Across from us is Hallin Fell and a little bit of blue sky. Blimey, where did that come from? 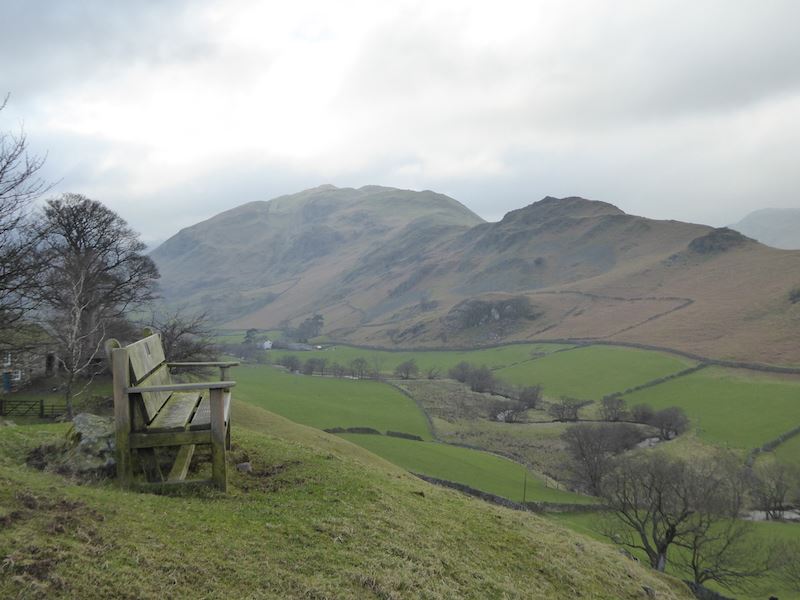 We made a slight diversion from the path to this viewpoint along Martindale. 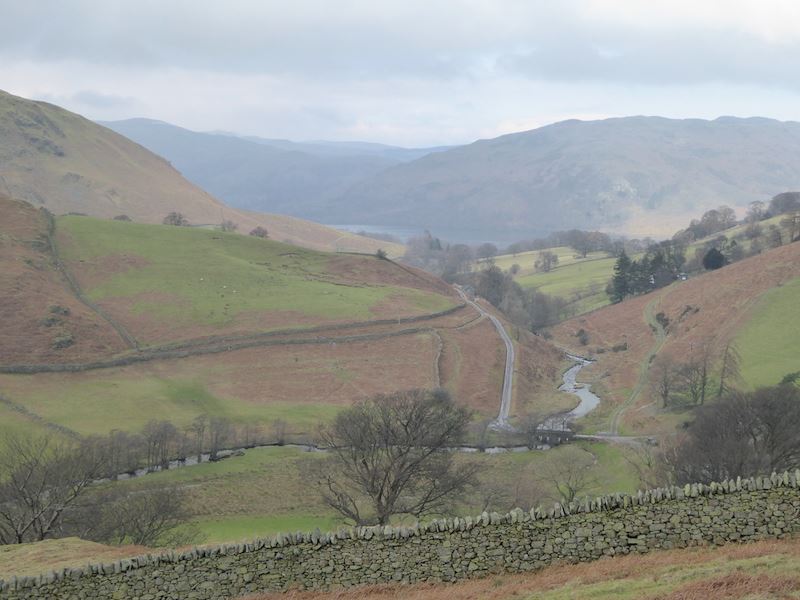 Back on our route again and down below is the bridge over Howegrain Beck which we crossed yesterday. 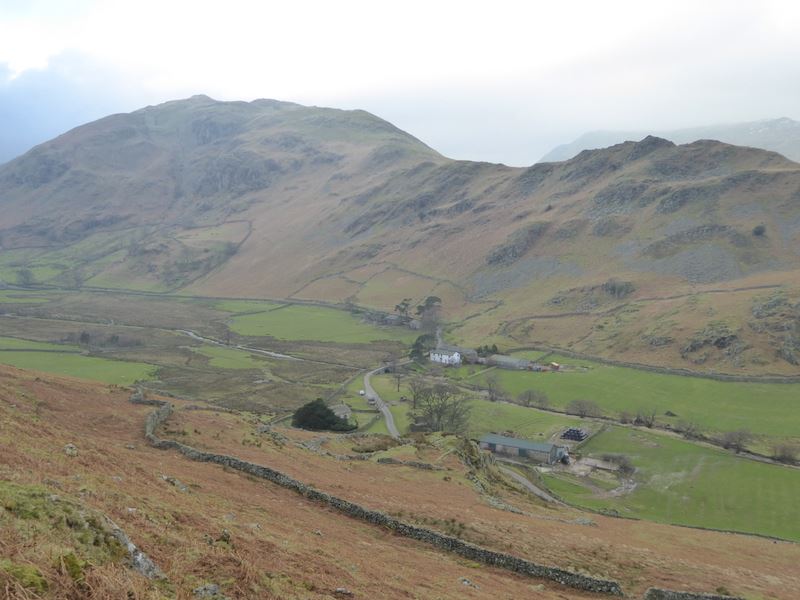 Winter Crag Farm down in the valley with Winter Crag behind it. Just behind the very dark yew tree is the old church of St Martin. 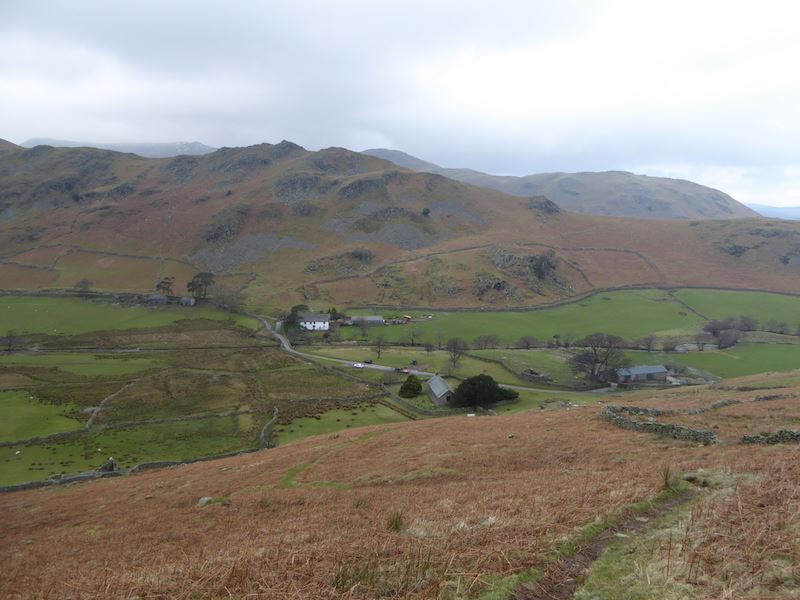 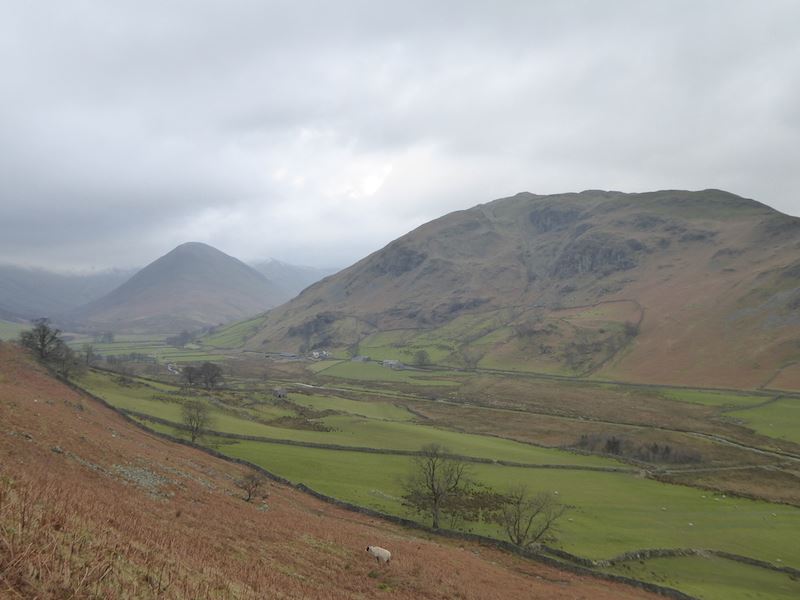 Its all looking a bit grey and gloomy over The Nab, on the left, and Beda Fell, on the right. 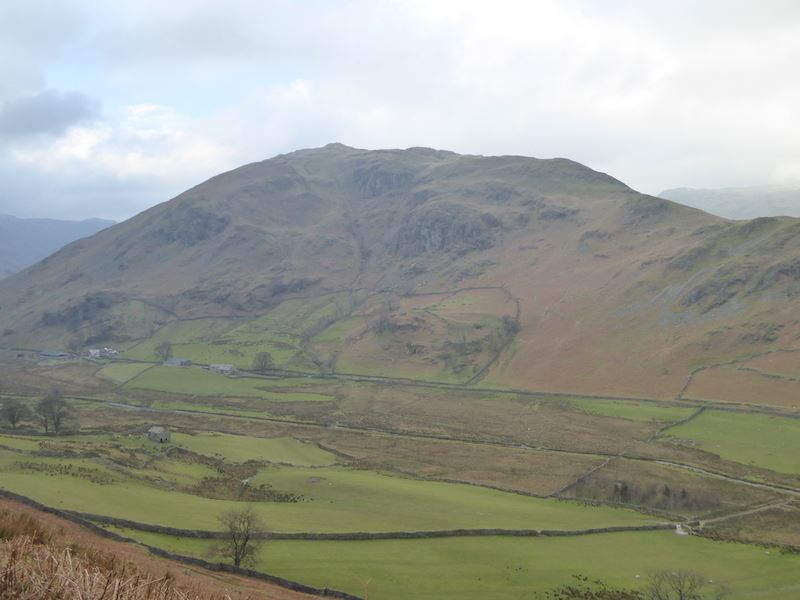 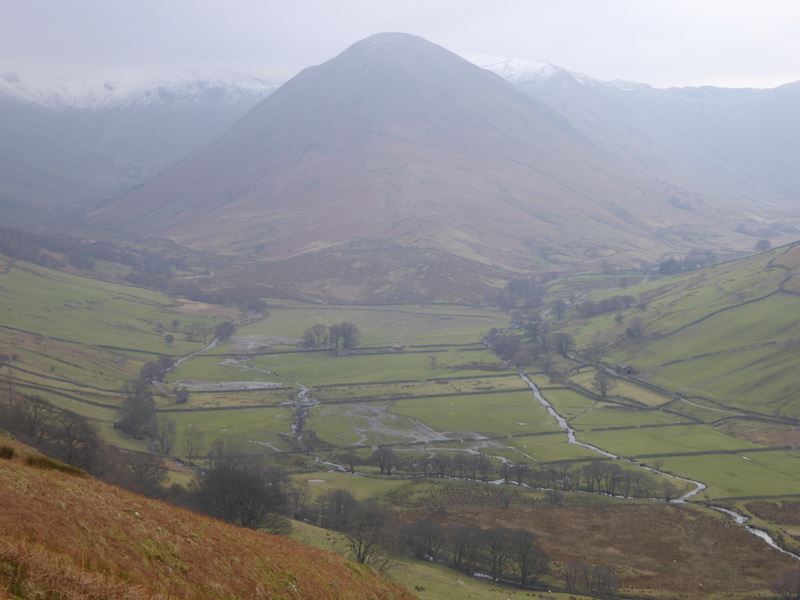 The Nab,  in the centre,  with the fields below it still partially flooded after all the recent storms. 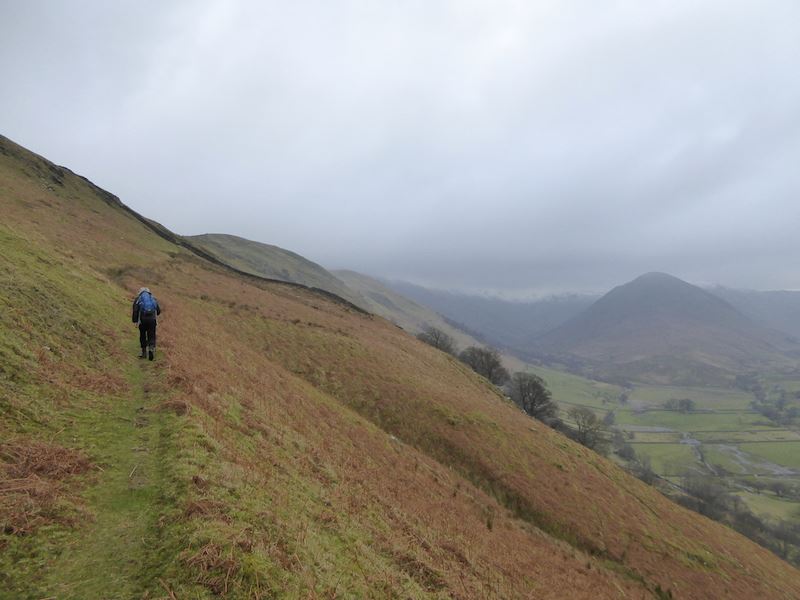 Continuing along the higher path which traverses the slopes of Steel Knotts. 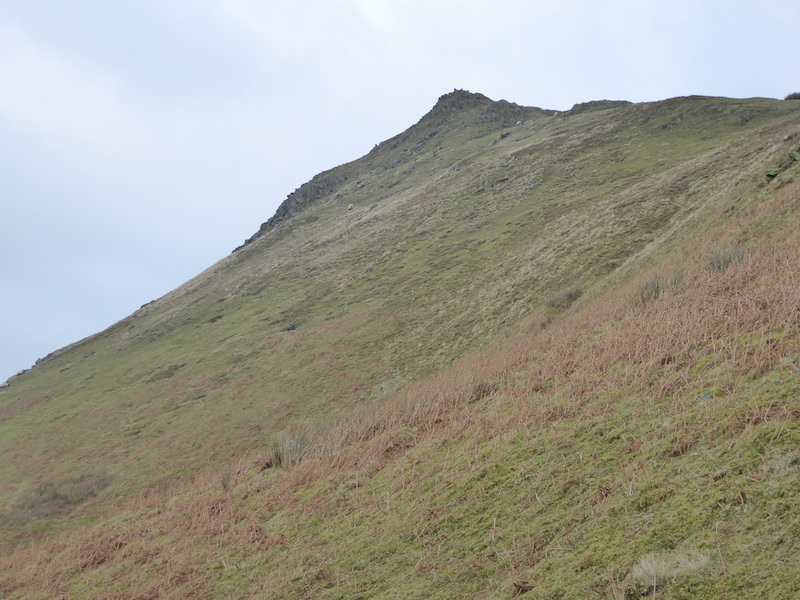 Above and behind us is the summit of Steel Knotts. You could climb straight up but its very steep and the route we are taking is easier on the legs. 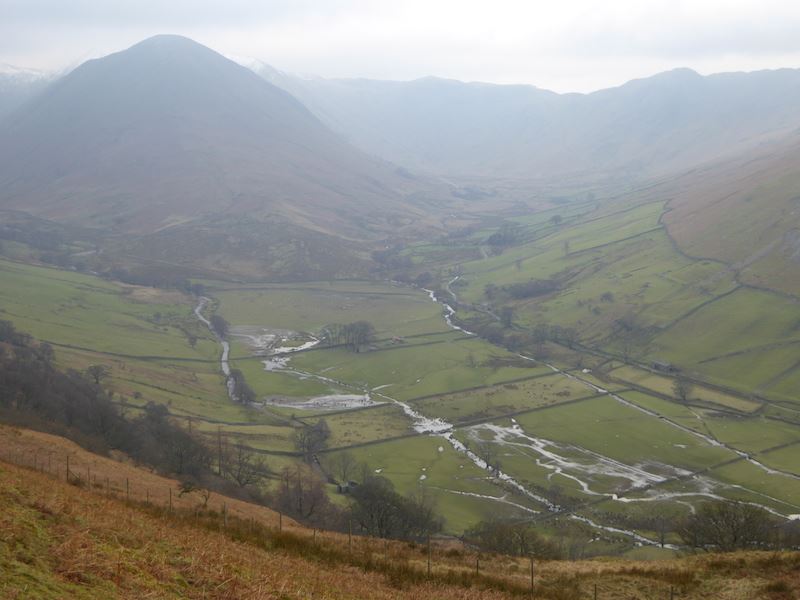 Another look down into a rather soggy Martindale. 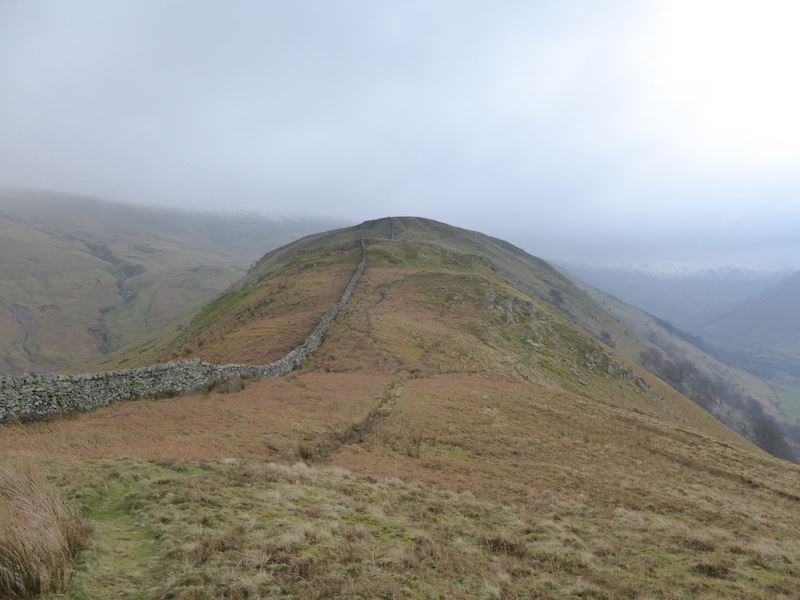 The traverse path we used came out, from the right, at the flattish area just below us. At that point we turned left to bring us up to here. Turning to the right at that point would eventually lead you up to the High Street range of fells, the slopes of which you can just about make out through the low cloud. Its not a good enough day to be up there in all that cloud with the cold east wind cutting through you. 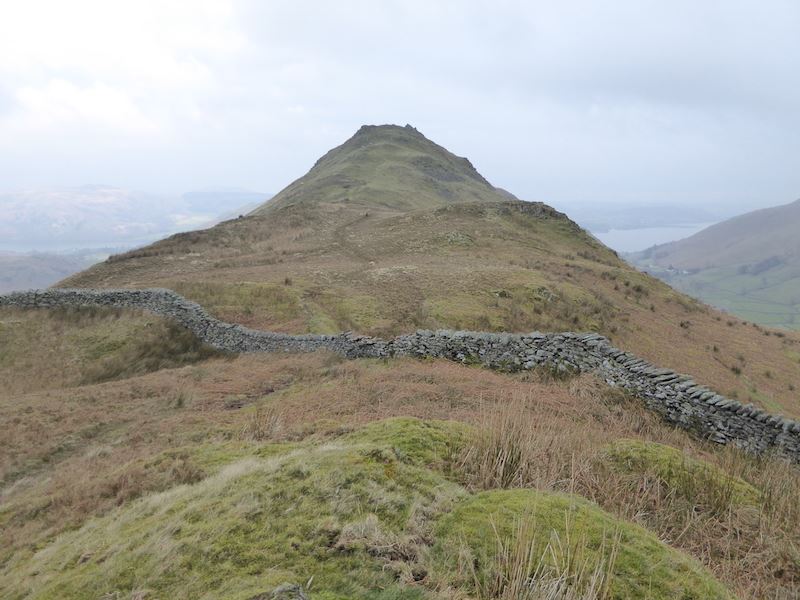 From the same point as the previous shot but turning round to see the summit of Steel Knotts directly ahead of us. It really isn’t as hard as it looks. 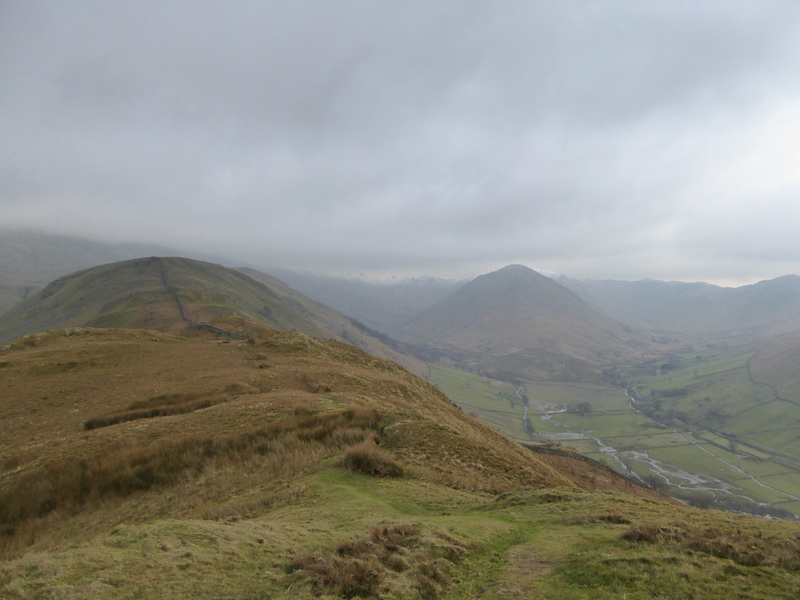 A look back from further along the path, with limited views of the fells beyond Gowk Hill and The Nab. 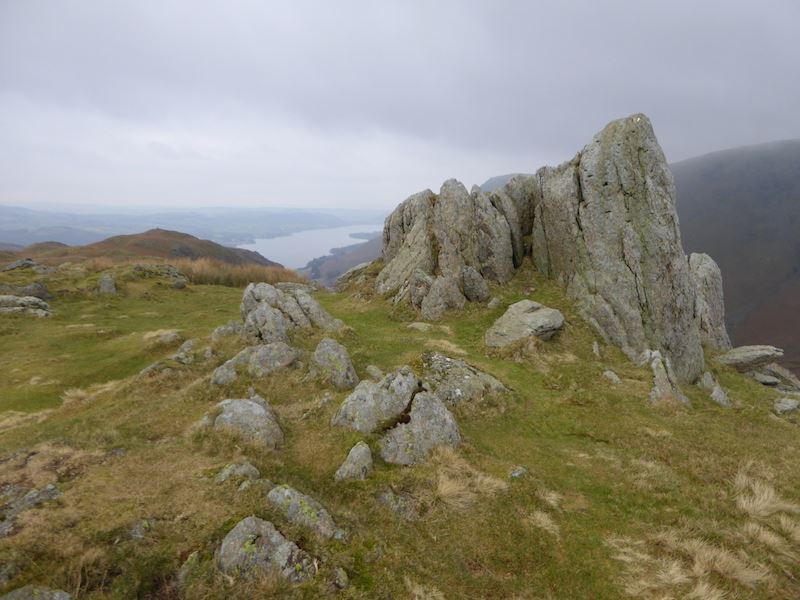 Pikeawassa, the summit of Steel Knotts. 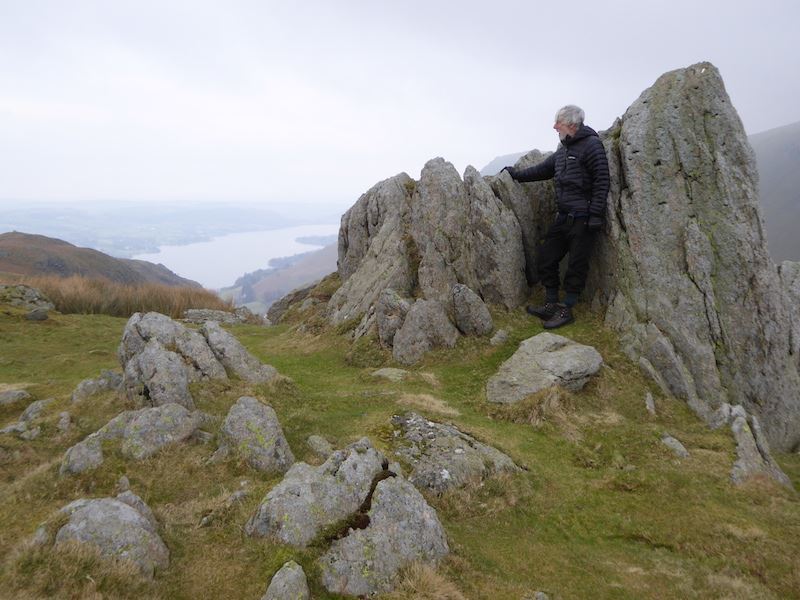 Taking shelter behind the summit rocks, no climbing up them today, its a bit too windy for that. 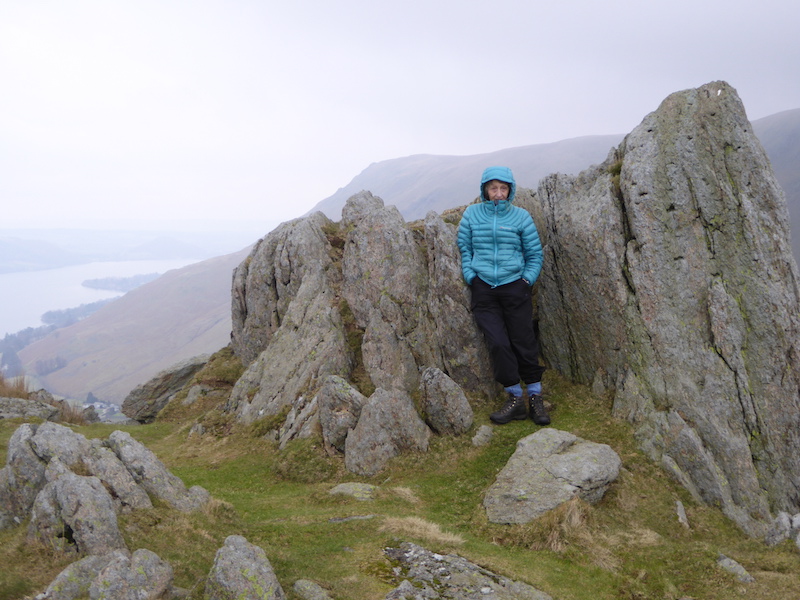 There was a biting east wind up here today. Its coming in directly behind me which is why I’m huddled in front of the summit rocks. 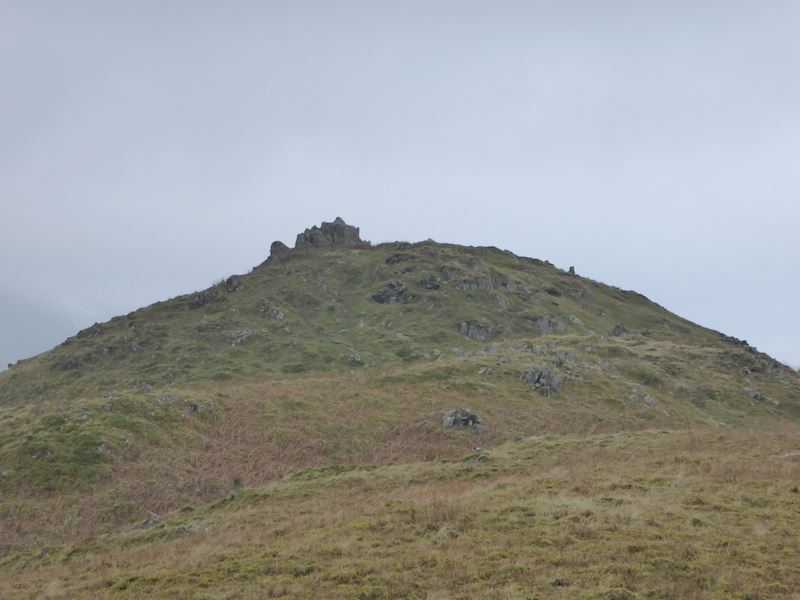 look back at the summit as we start the descent from Steel Knotts. It was far too cold to hang around and the views were limited. 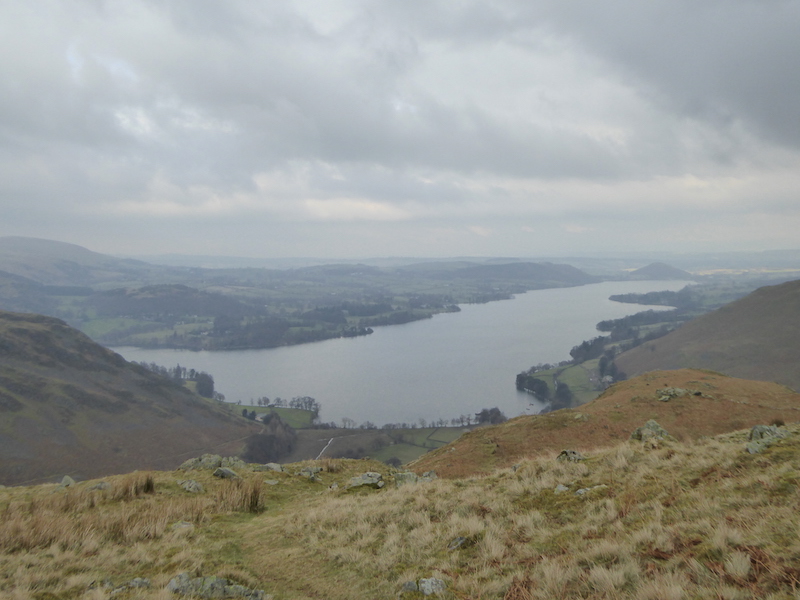 The Pooley Bridge – Howtown section of Ullswater from the descent path. The Pooley Bridge pier is at the far end close to that small conical hill, and the Howtown pier is tucked away in that crescent shaped bay just above the brownish slope below us. 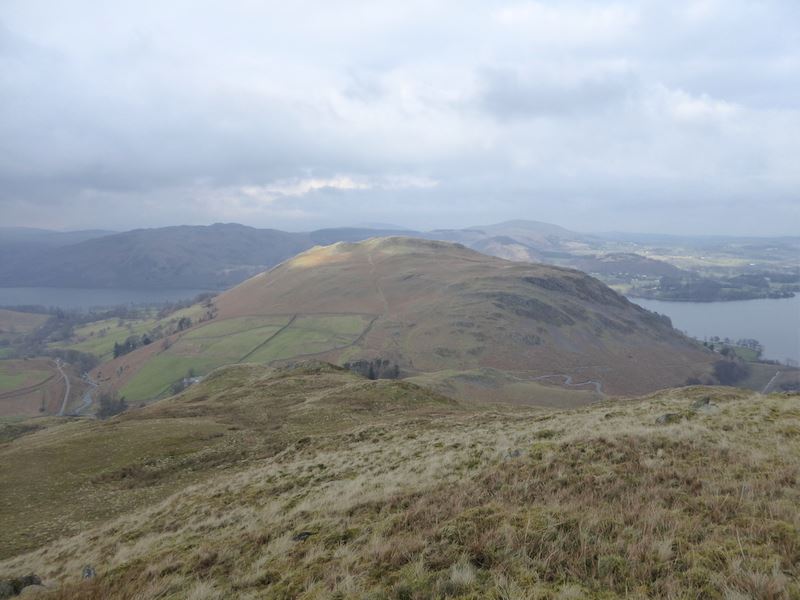 Quick, get a shot of that sun on Hallin Fell before it disappears. 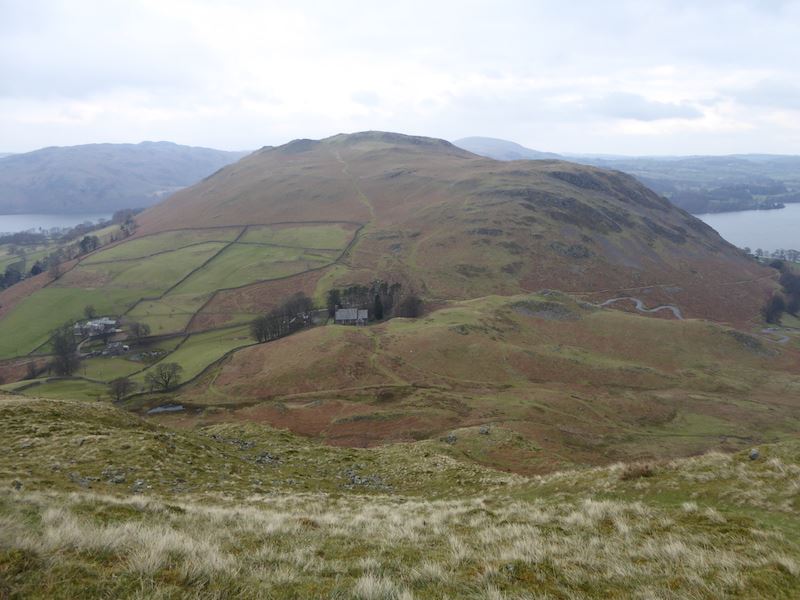 Descending Birkie Knott with Hallin Fell directly ahead of us. The Howtown hairpins over on the right of the shot. 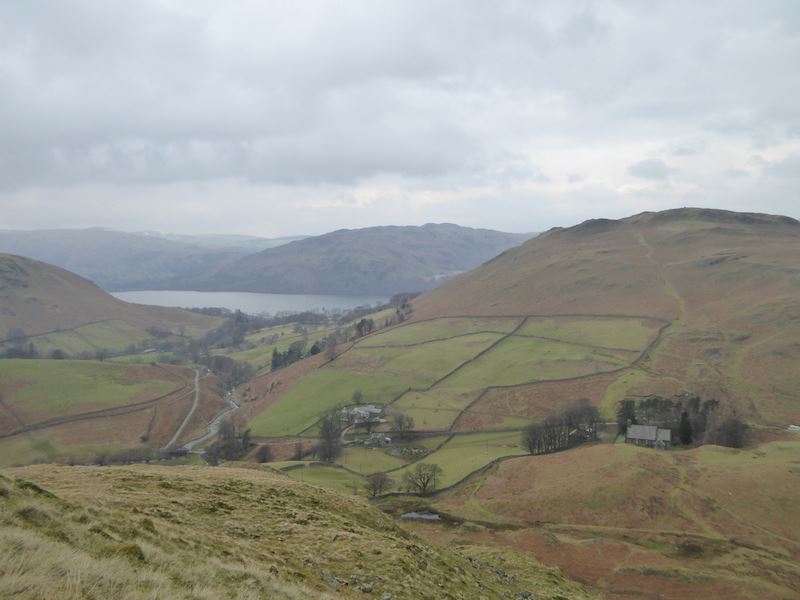 A little bit of Ullswater showing below Gowbarrow Fell with Lanty Tarn and St Peter’s church directly below us. One of those sleety showers came over as we were making our way down, but it didn’t bother us too much. 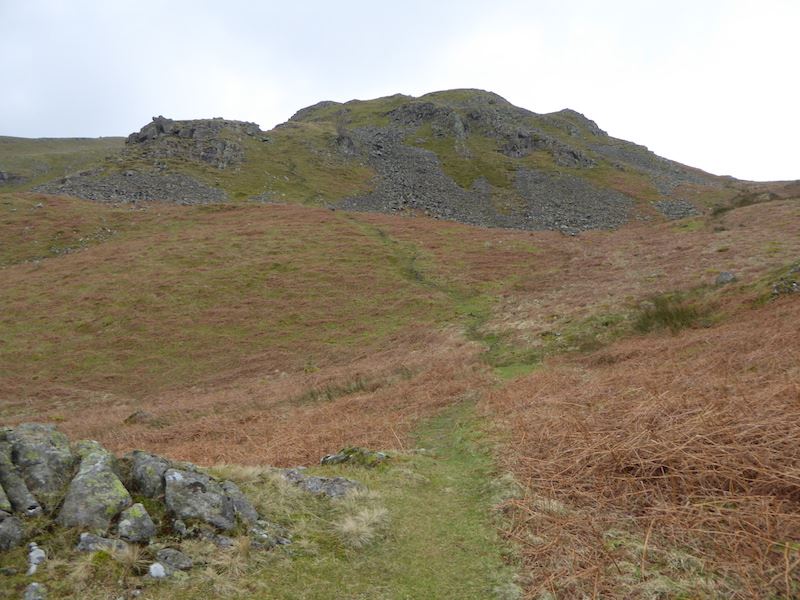 A look back at our route down Birkie Knott. The camera threw a wobbly after I’d taken this shot and refused to focus properly so there are no more photos today. It did the same thing just before the guarantee expired so there was no charge for the repair. The warranty on the repair has now expired, ho hum.