We had a short walk over Swindale Common this afternoon. The Common can be very wet in places but after a week of dry weather we thought the ground would be a lot less squelchy than it has been lately. That turned out to be the case and we spent a pleasant couple of hours walking the Common, visiting Harper Hills and Powley’s Hill on the way. 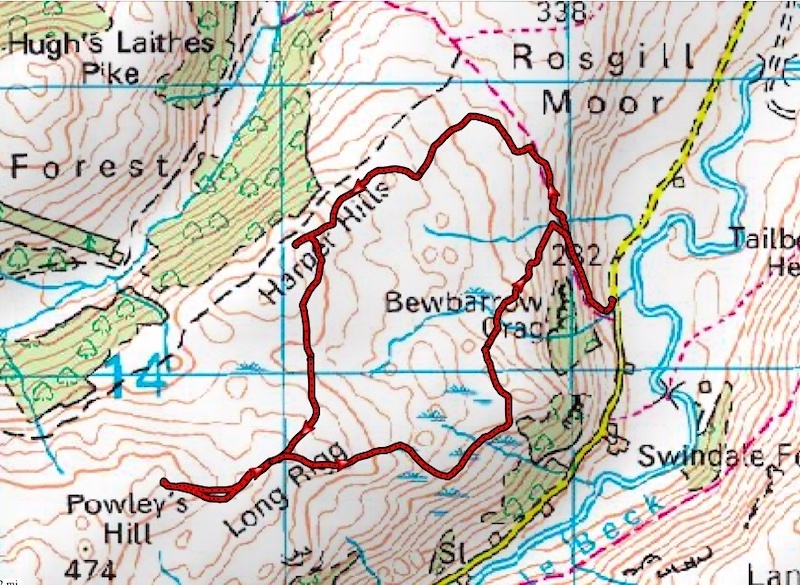 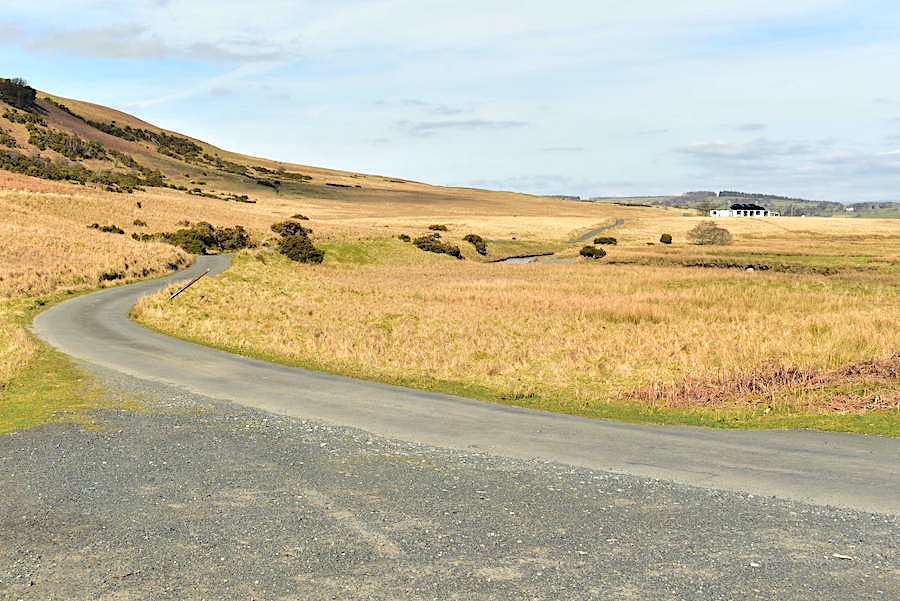 The view back along Swindale from the parking area. There is no parking along the access road beyond this point so there’s a long walk up the valley for anyone wanting to visit Forces Falls or climb Selside Pike from Swindale Head. 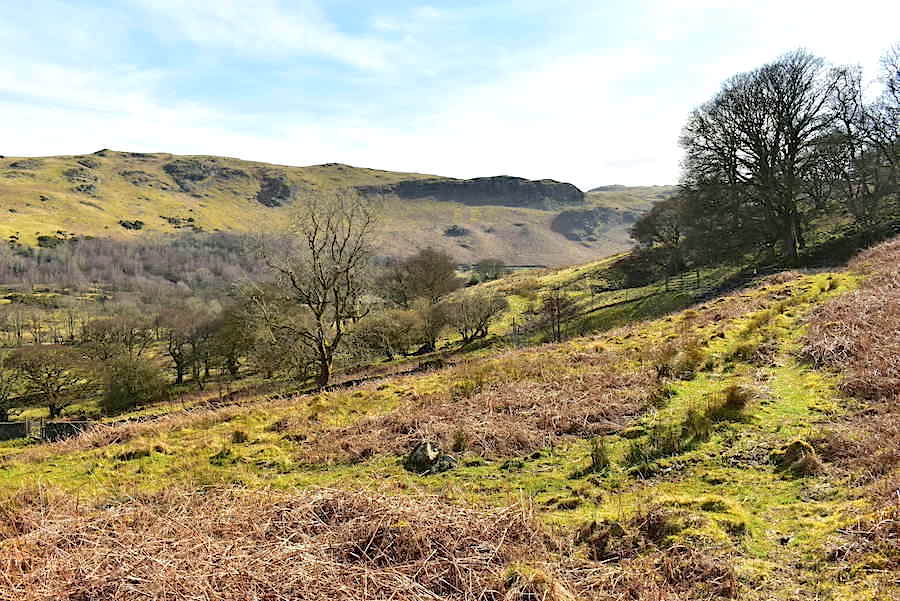 A footpath begins directly from the parking area and joins this one which traverses the fellside below Bewbarrow Crag. Its a good grassy path and not too steep a climb. Here’s a look back at the view along Swindale when we reached the path junction. 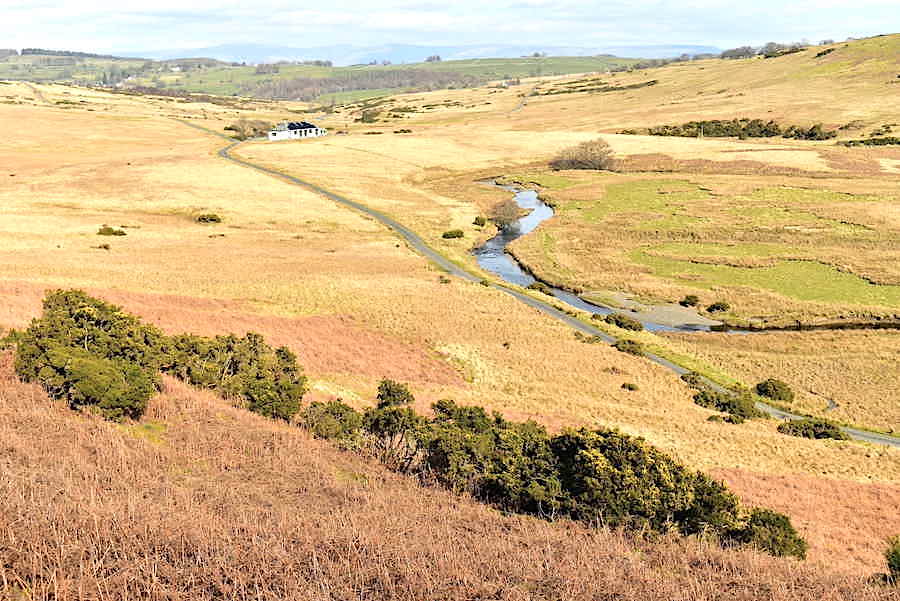 From the traverse path the view down into Swindale showing Swindale Beck and the access road with the filter house alongside it. It looked as though some work was taking place on the filter house so perhaps it is being turned into a residential property. 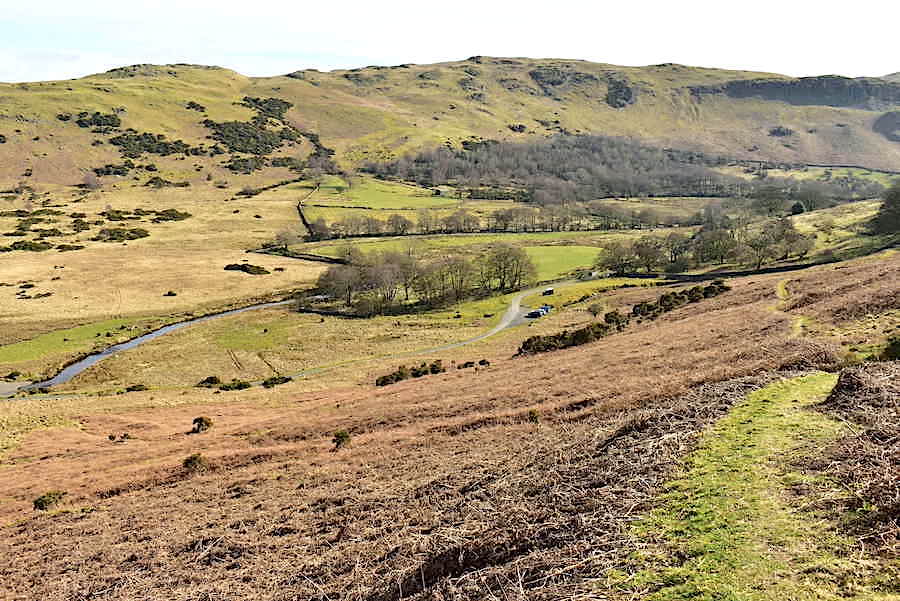 Another look back into Swindale and the parking area from the traverse path. When we reached the flatter area at the top, and before the path began dropping down into Mardale, we turned off to the left and made our way over to Harper Hills. 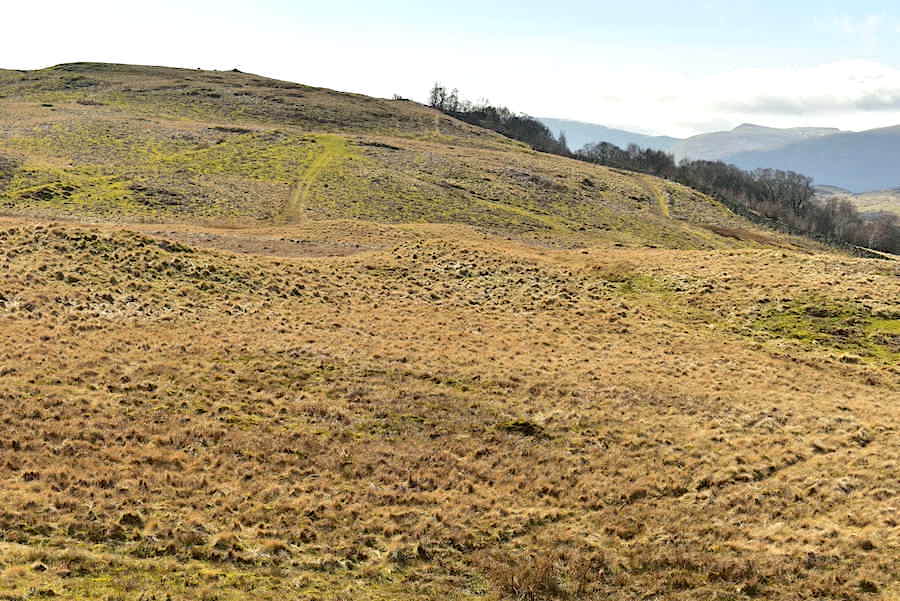 Harper Hills ahead and plenty of choice regarding paths and routes. 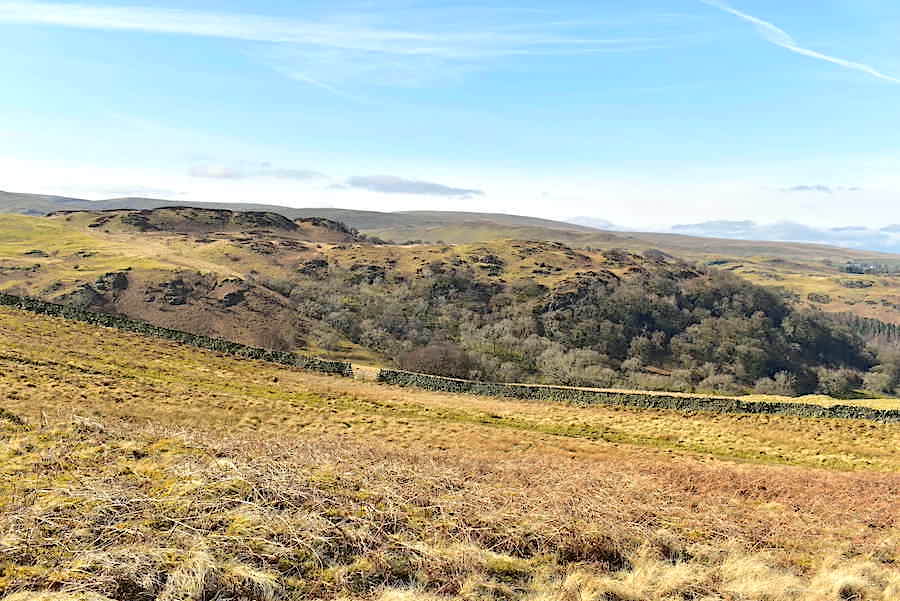 The area known as Naddle Forest is over on our right as we make our way over to Harper Hills. The only patch of forest still remaining is covering the slopes of Hugh’s Laithes Pike over on the right. 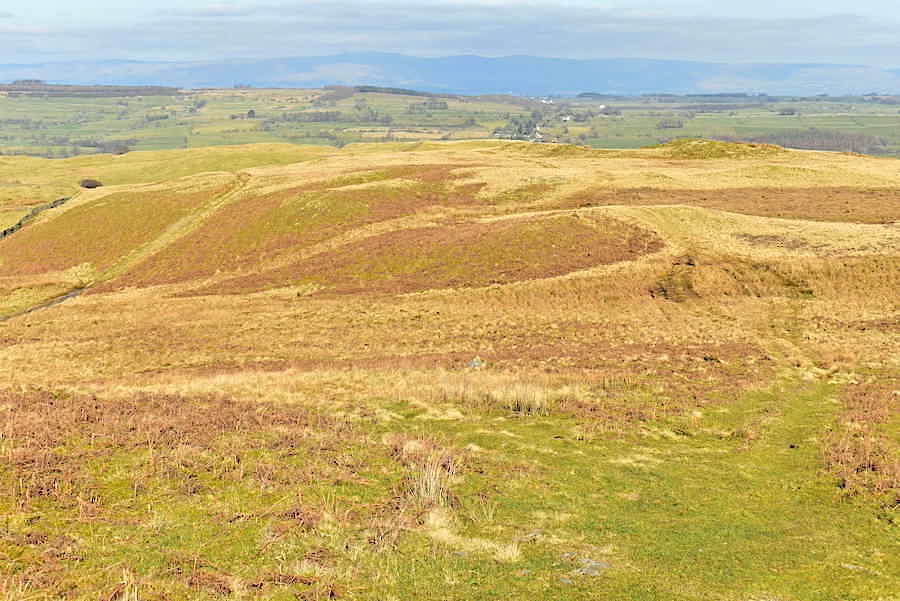 The view back along the common as we climb Harper Hills. 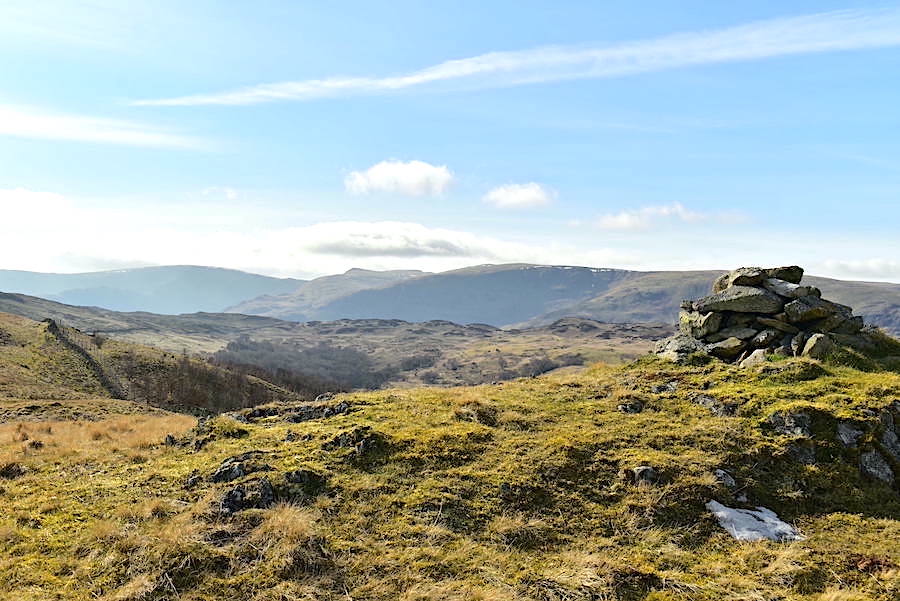 The cairn on Harper Hills and distant views of High Street, Kidsty Pike and High Raise to the south west of us. 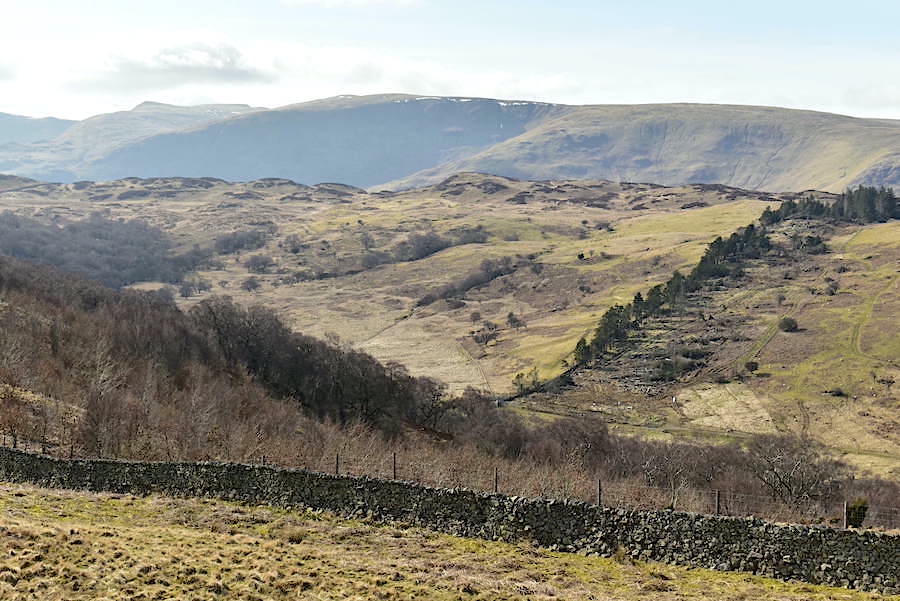 Looking across Mardale Banks for this view of Kidsty Pike, High Raise and Long Grain. A few patches of snow still lingering on Whelter Crags. 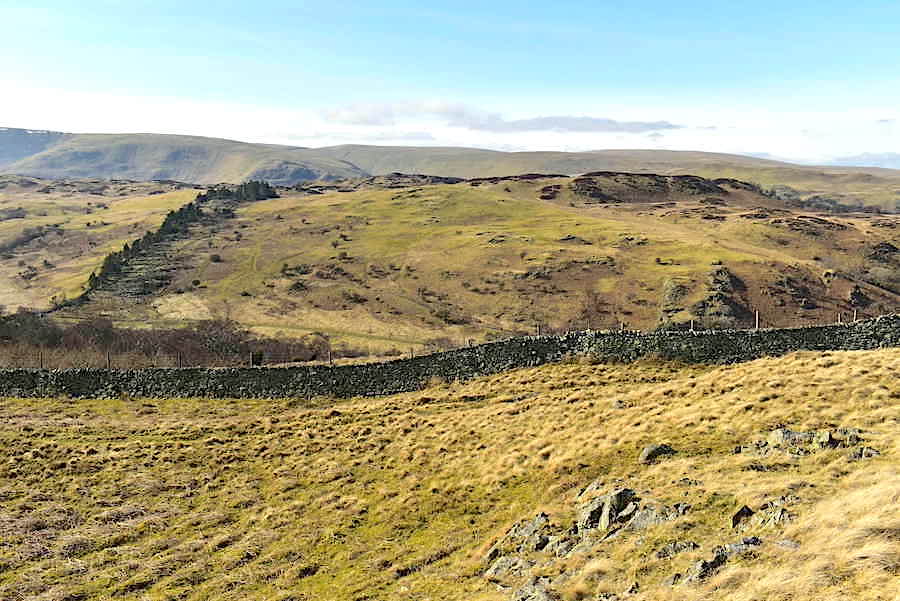 The southern end of Naddle Forest, known as High Forest, presumably trees were more abundant in the past than they are now. 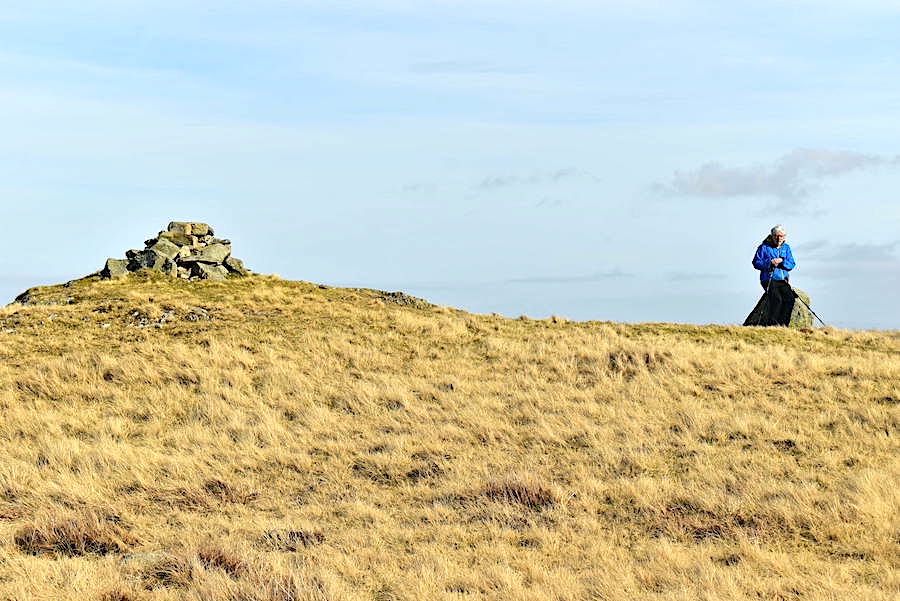 Man and cairn on Harper Hills. 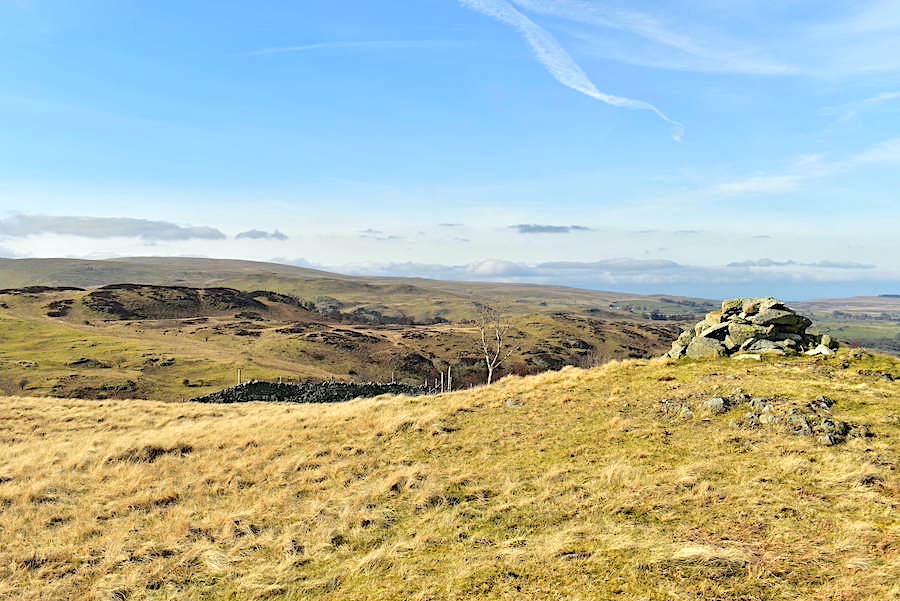 Looking north across Naddle Forest from the cairn. 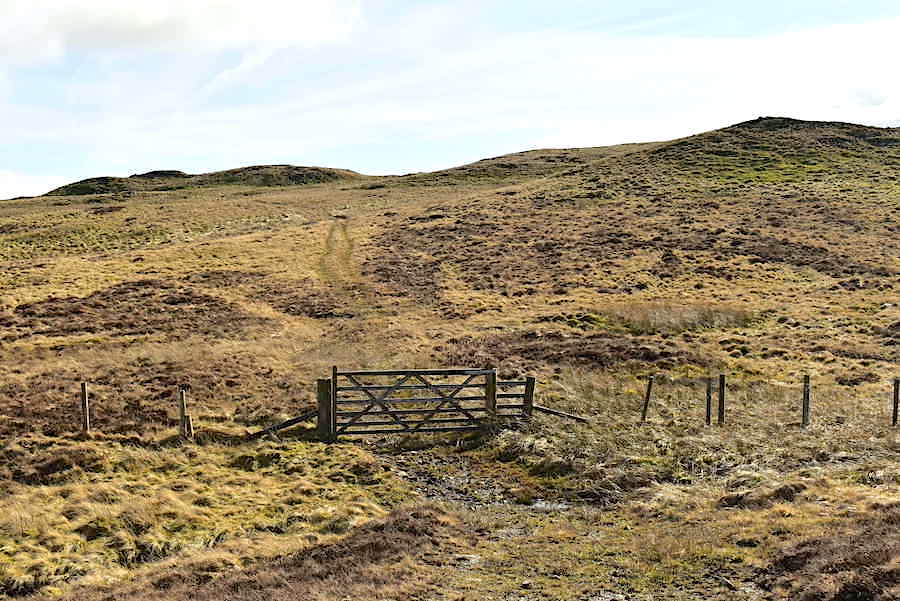 From Harper Hills we carry on towards Long Rigg and Powley’s Hill via one of the many quad bike tracks. 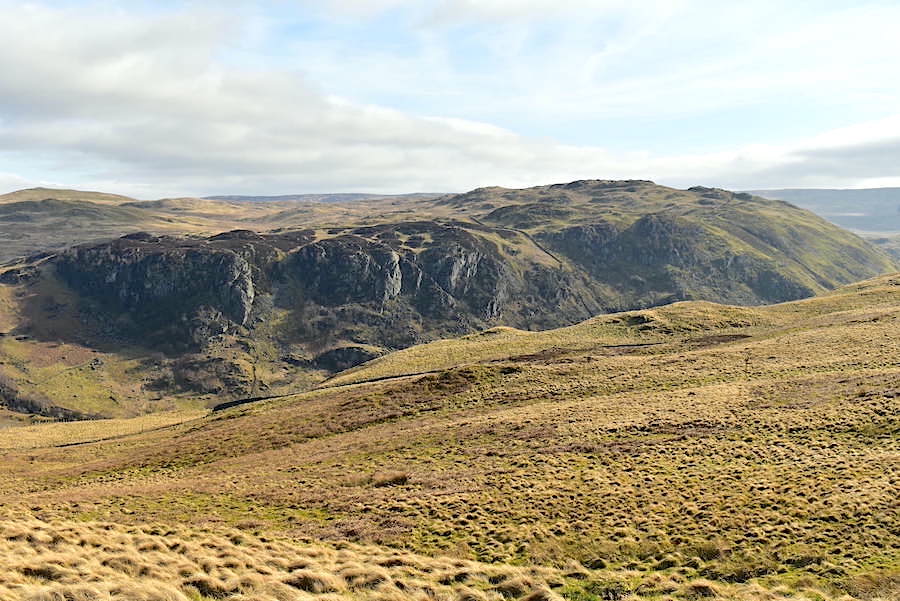 Gouther Crag, Outlaw Crag and High Wether Howe on the eastern side of Swindale as we cross over Long Rigg. 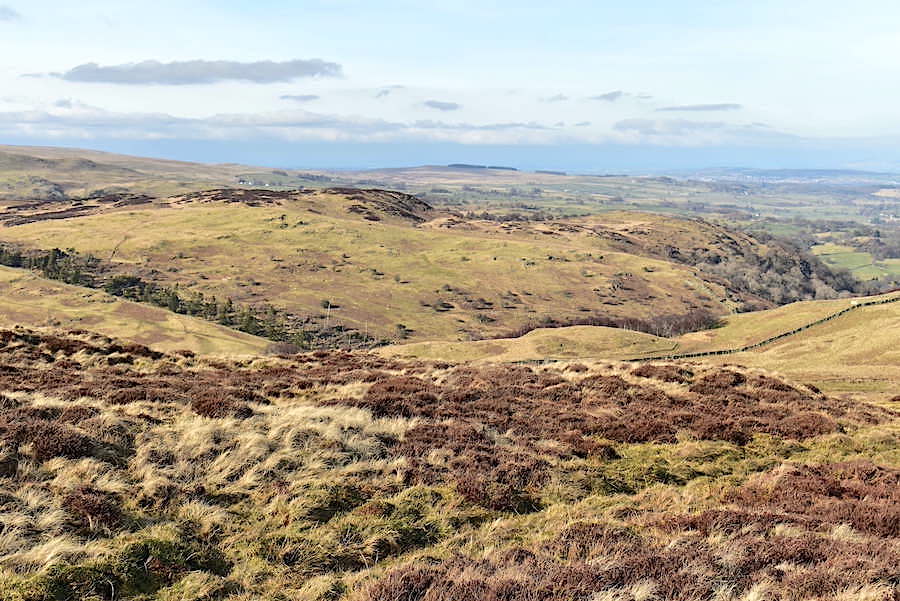 The view back to Naddle Forest from Long Rigg. 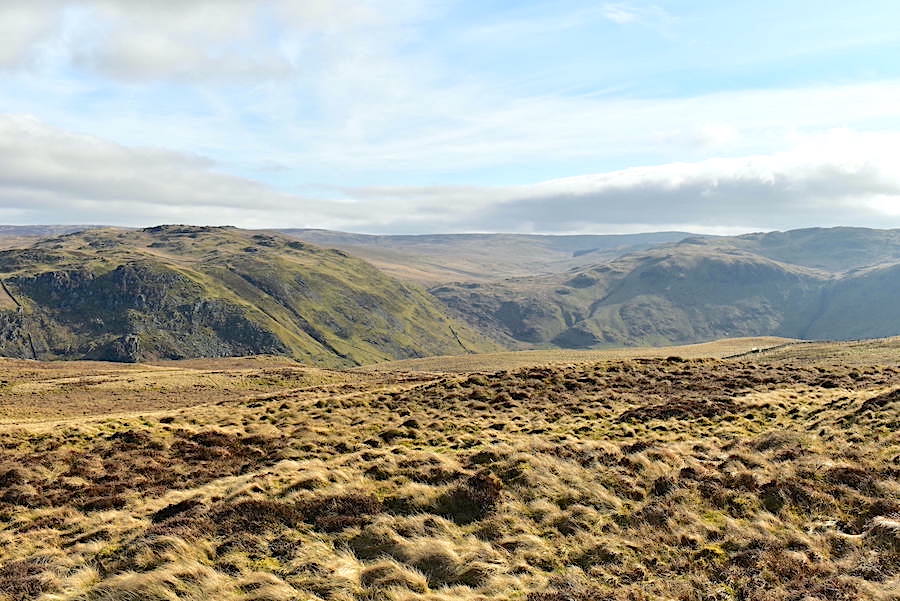 The view south east across Swindale from Long Rigg. High Wether Howe on the left and Nabs Crag, above Dodd Bottom, to the right. 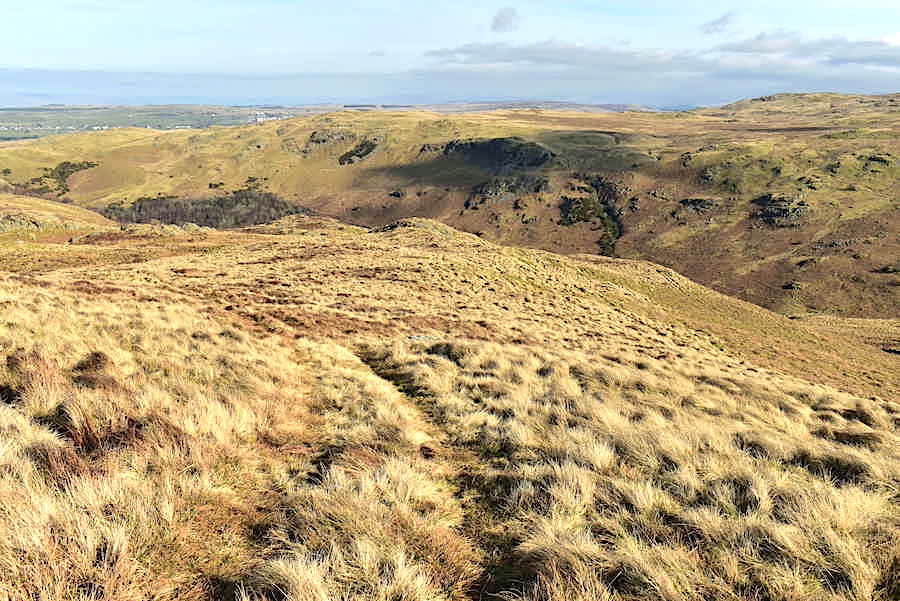 A look back across Swindale as we climb Powley’s Hill. 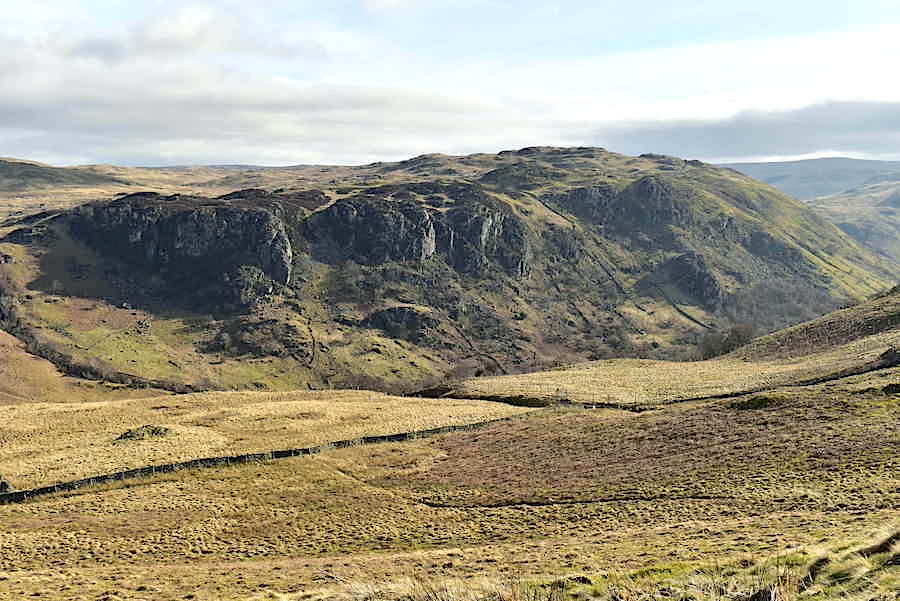 From Powley’s Hill a view of Gouther Crag, Outlaw Crag and High Wether Howe. No stone or cairn marks the top of Powley’s Hill. Shots of the fells around Mardale to the south west would have been nice but the sun got in the way so I didn’t bother. 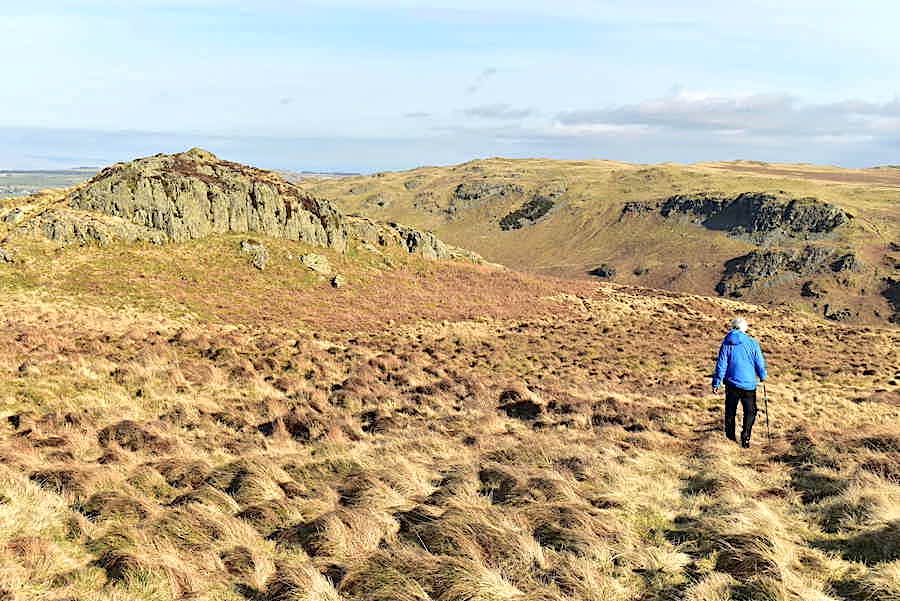 After a short break on Powley’s Hill we began making our way back to Swindale avoiding a large boggy patch by skirting around this outcrop ….. 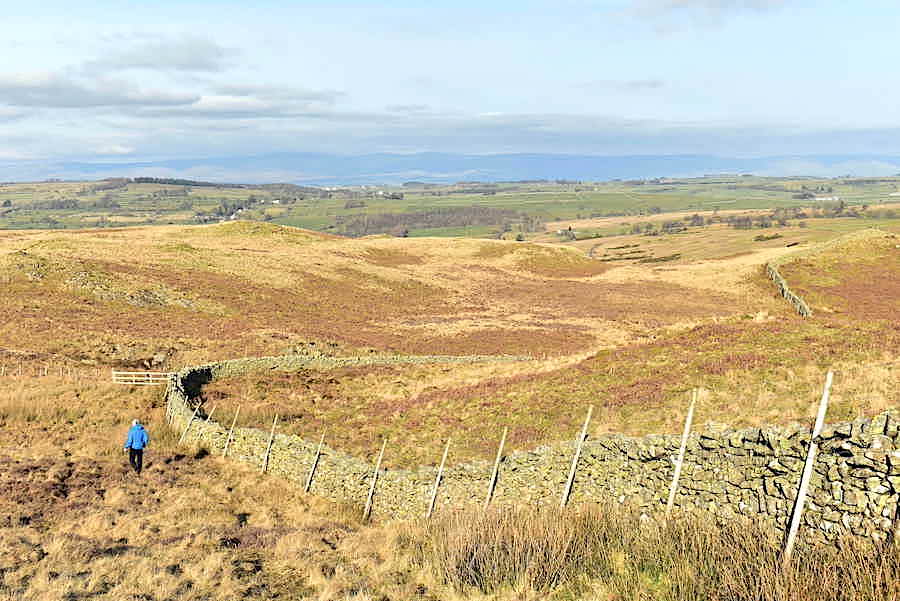 ….. and following a quad bike trail until we came to the wall with deer fence encircling Swindale Foot Crag and Bewbarrow Crag, both of which are best avoided by quadrupeds and bipeds, especially these two bipeds. 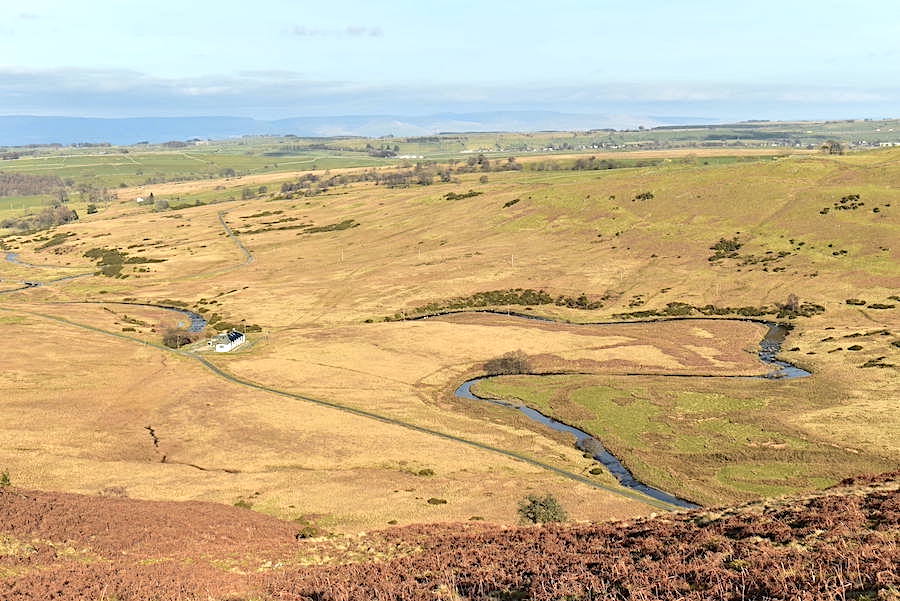 The wall eventually turns off down the steep craggy slope so we keep straight ahead and make for the path we used on the outward leg. Here’s the view into Swindale from Bewbarrow Crag. 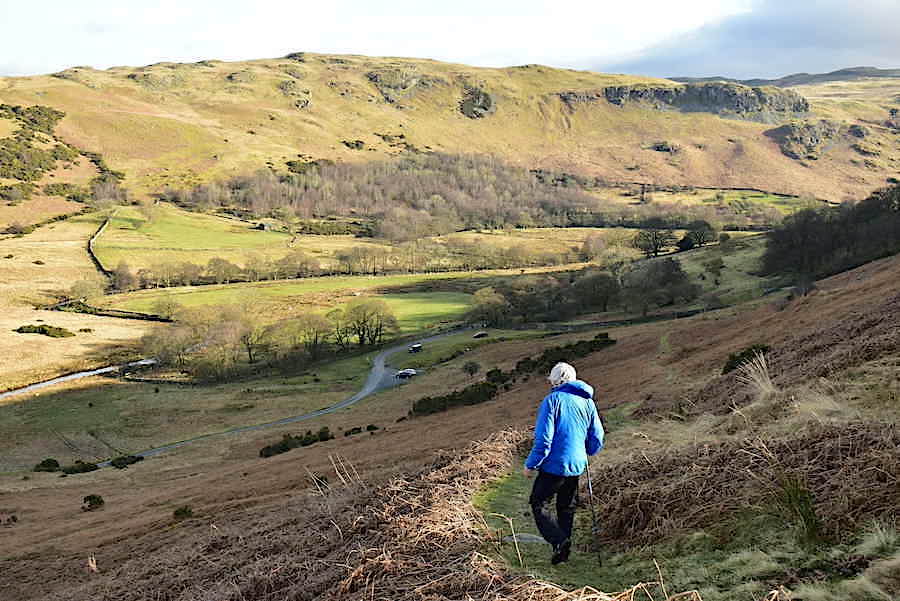 We eventually meet up with our outward path and make our way back down to the Swindale parking area. Whenever we walk over Swindale Common we always end up taking an entirely different route to previous visits. It isn’t planned that way either, it just seems to happen. Whichever way you go Swindale Common makes for a very pleasant ramble on a sunny afternoon. And finally … I’m sure you will be very interested in this interview –

Its not a video, just sound only, and the person being interviewed is bringing a legal action for fraud against Hancock, Whitty, Vallance and Ferguson. The legal papers, together with 1200 pages of evidence, were submitted to court on Friday 19th March 2021. I wish this man every success because it is well past the time this attack on us and our country was brought to an end. It must be blindingly obvious to everyone now that we have been strung along and lied to for the past twelve months and that there is no intention of allowing normal life to return any time soon. You can also read the Public Notice of Intended Prosecution which has been posted on the interviewee’s site here –

I hope you will share these links with everyone you know.