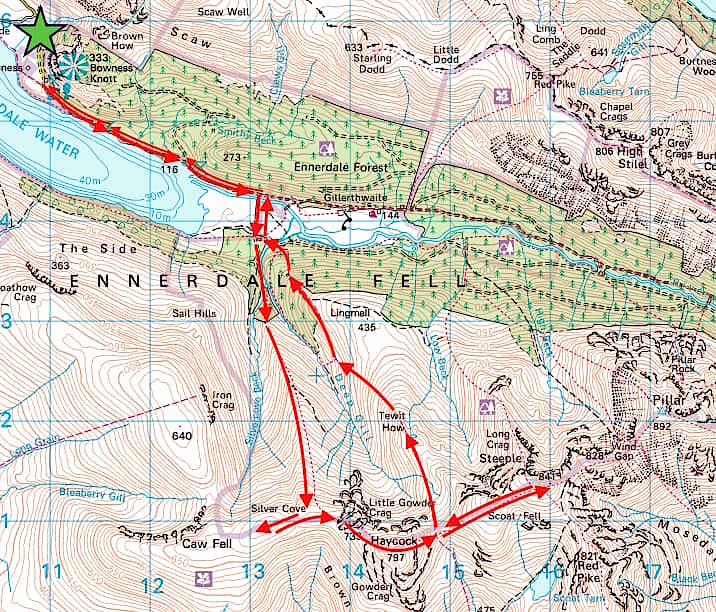 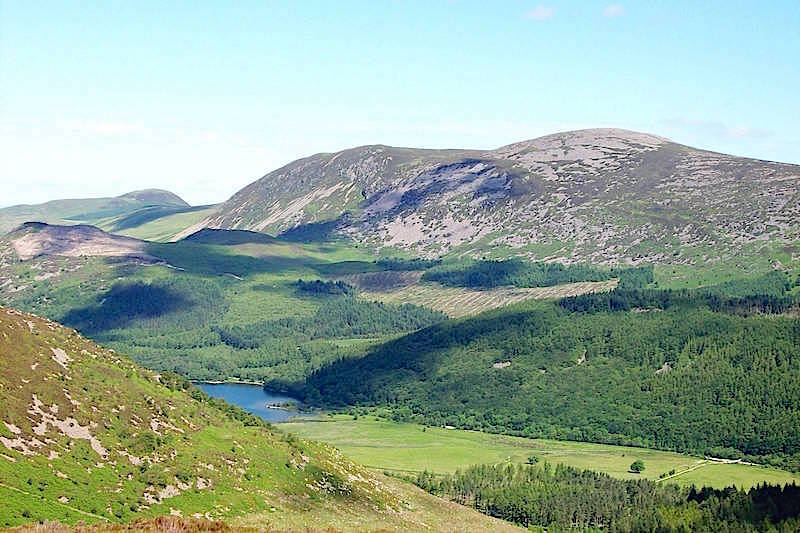 We’re in Ennerdale today, a rather remote area of the lakes with very little human habitation. The blue patch down there is Ennerdale Water, and above and to the left of it is the pinkish, treeless top of Bowness Knott. The car park is just below Bowness Knott from where there is a walk of a couple of miles along the shore and then through the forest on the other side of the fields down there. Towards the bottom right of the photos is a bridge, known as the Irish Bridge, over the River Liza and from the bridge a straight path leads across the fields. So already we’ve walked a good distance to get to this point and we’ve not done any climbing so far. In the centre is another patch of tree-felling and above that is Great Borne. (Before going any further I should mention that the camera I was using then did like creating pinkish-purple tones on my photos from time to time.) 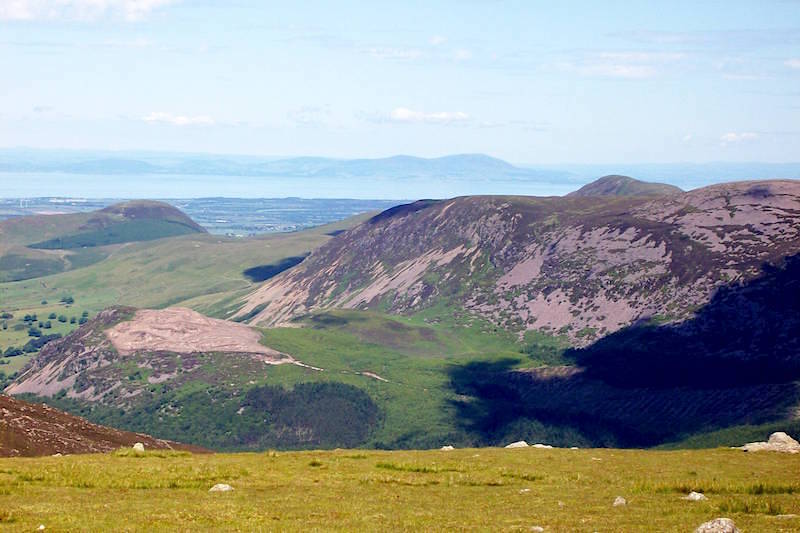 A better view of Bowness Knott’s bald patch.The water beyond is the Solway Firth with some of the Scottish hills rising above it. 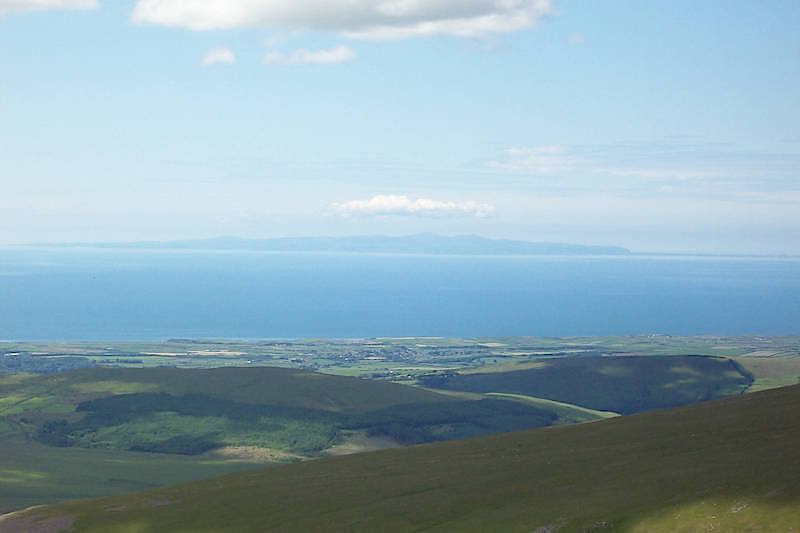 A closer view of a shape appearing through the haze, could it be the Isle of Man? 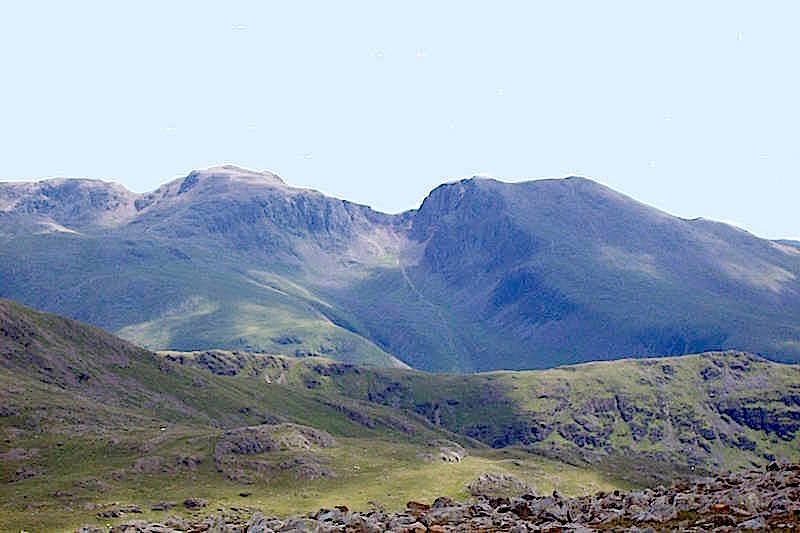 There is no mistaking what this is a view of, the two highest lumps of rock in England. On the left is Scafell Pike and on the right is Scafell. The gap between the two is Mickledore. 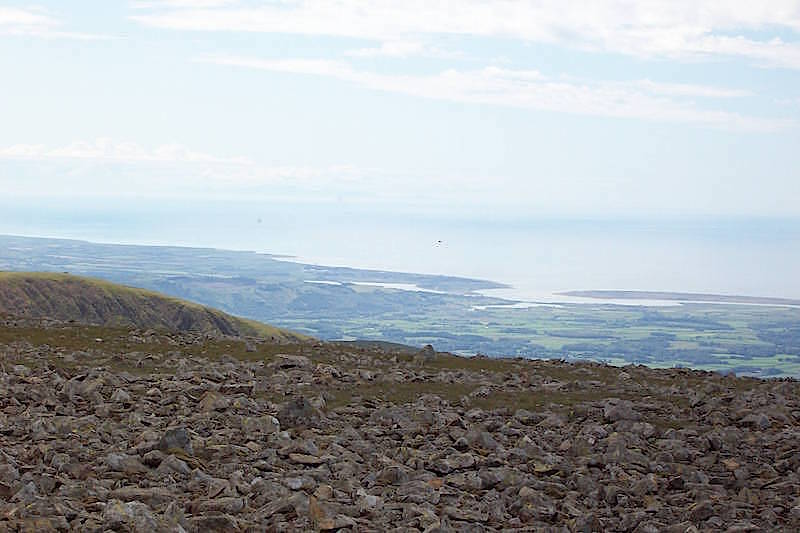 From Haycock a look over to the coast, although it is a bit too sunny and hazy to see the horizon very clearly. 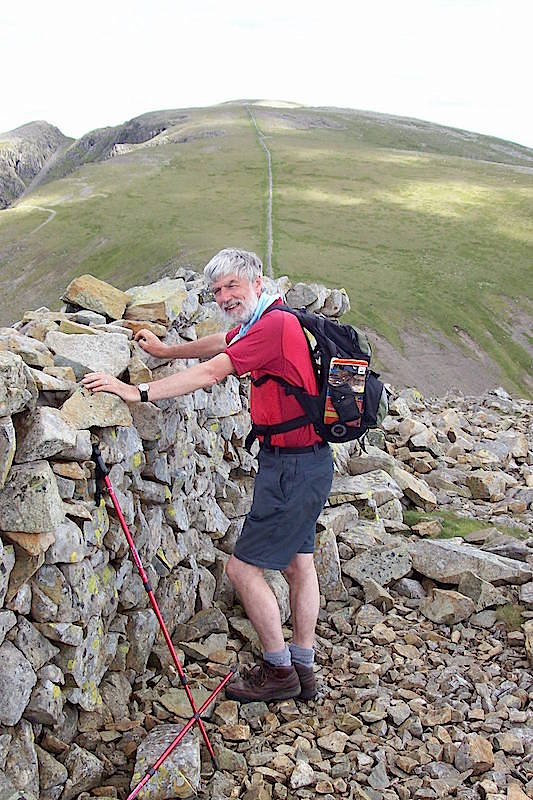 Time for a bit of a breather on Haycock summit before we tackle the next bit of the route, which just happens to be up alongside the wall rising over there across the grassy slopes of Scoat Fell. 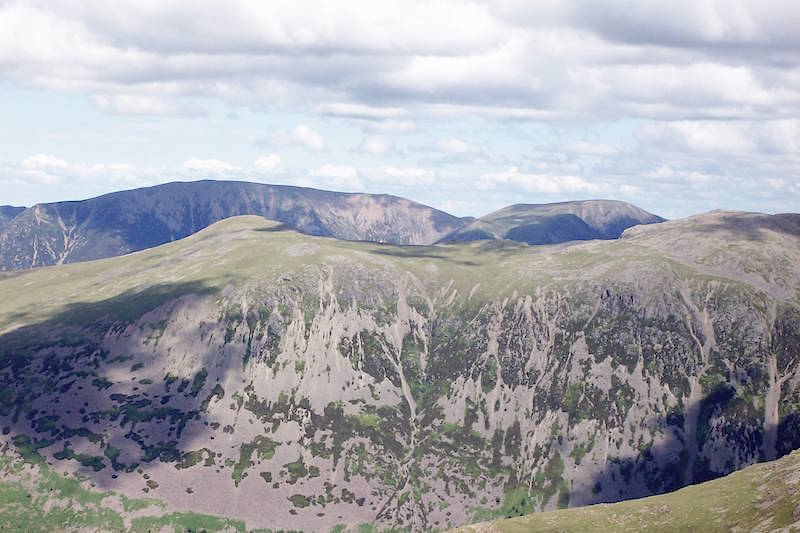 Immediately across from us on Haycock is Starling Dodd, on the left of the ridge in the middle, with Red PIke over on the far right. Behind Starling Dodd is Grasmoor, and to the right of Grasmoor is Crag Hill. 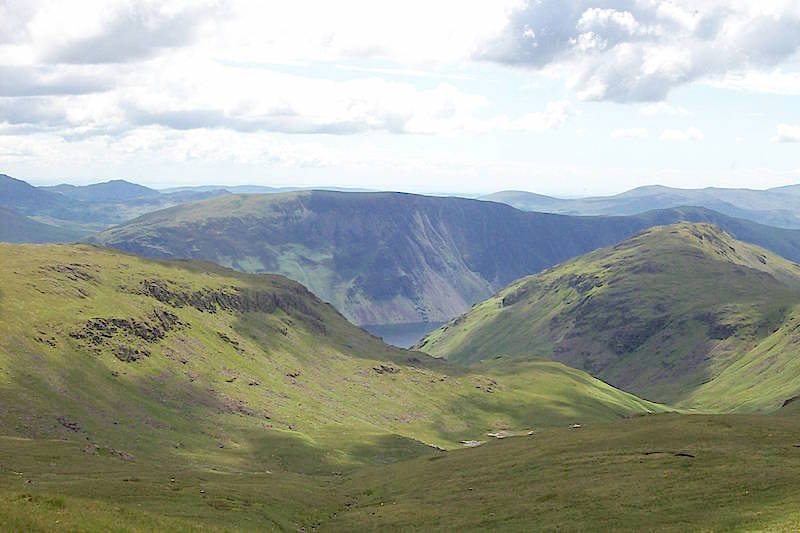 Looking behind us from the same place there’s glimpse of Wastwater with Ill Gill Head behind it. 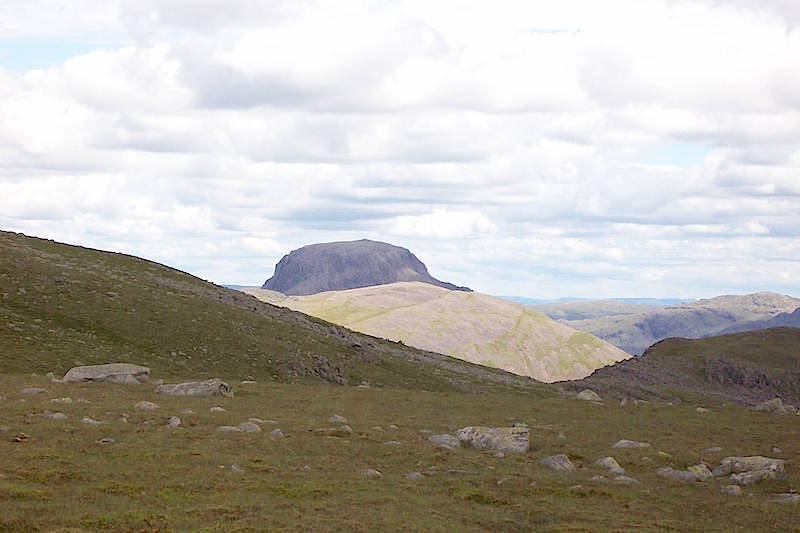 The camera isn’t up to its old tricks here, the light was just as it appears on the shot and it does look a bit quirky. I’m on the path between Haycock and Scoat Fell and it was the colour contrasts which caught my eye. The big dark mound on the skyline is Great Gable while the lighter coloured area is its next door neighbour Kirk Fell. 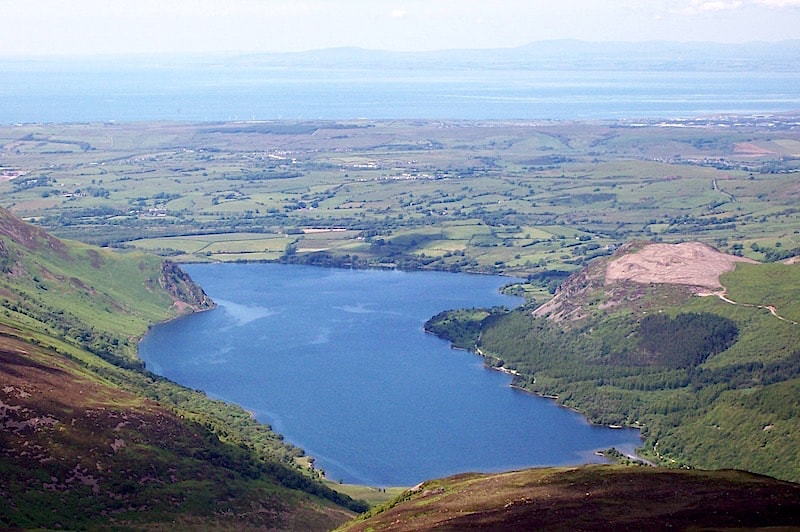 A splendid view of Ennerdale Water, and the Solway Firth, from Scoat Fell. 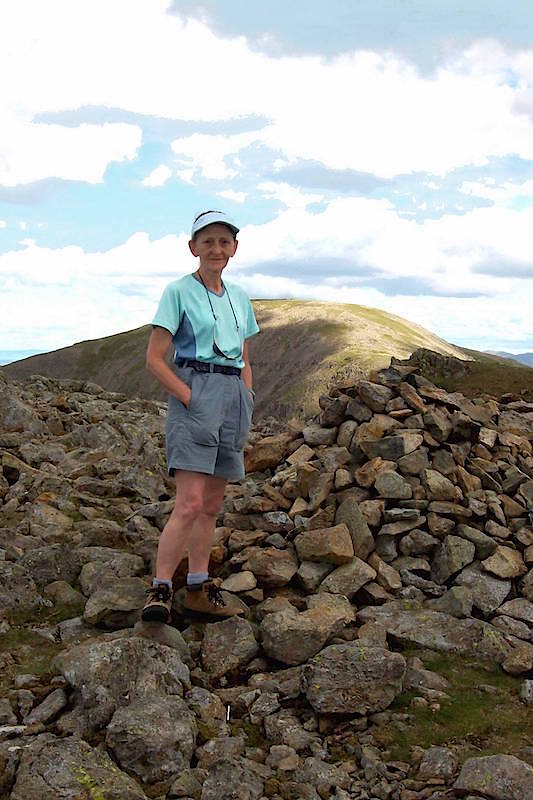 Scoat Fell summit, or as near as its possible to get given that the stone wall runs right over the highest point of the fell. 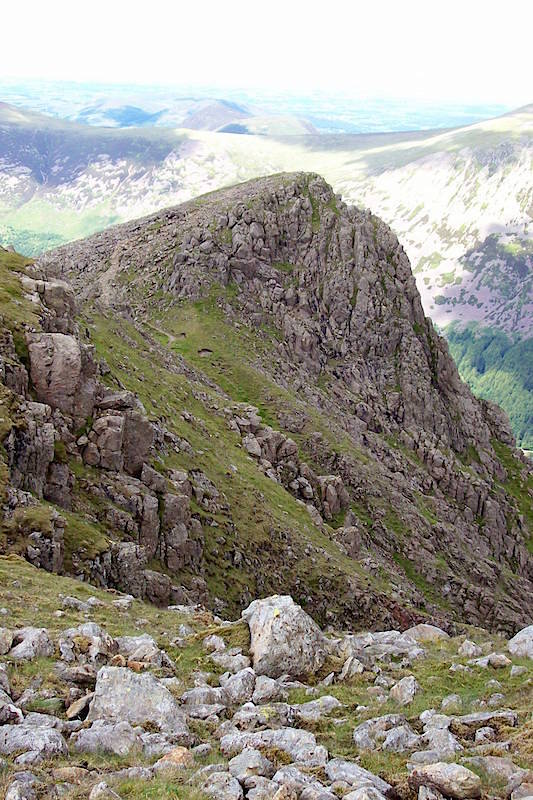 Steeple from Scoat Fell. We could have gone across, as there is a short path from one to t’other, and then returned to Bowness Knott down Steeple’s north ridge, instead of returning the way we did via Tewit How. I can’t remember why we opted for the Tewit How route, probably as we hadn’t been that way before. 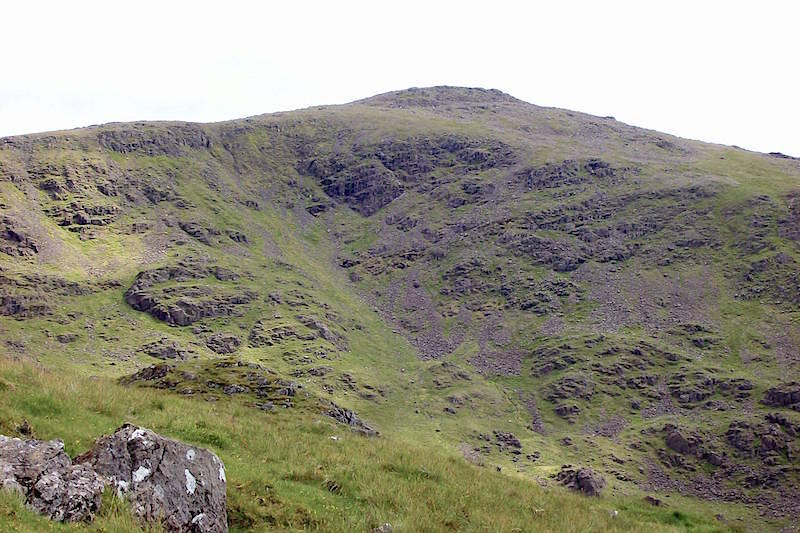 On the return leg now and a look back at Haycock from the descent path. 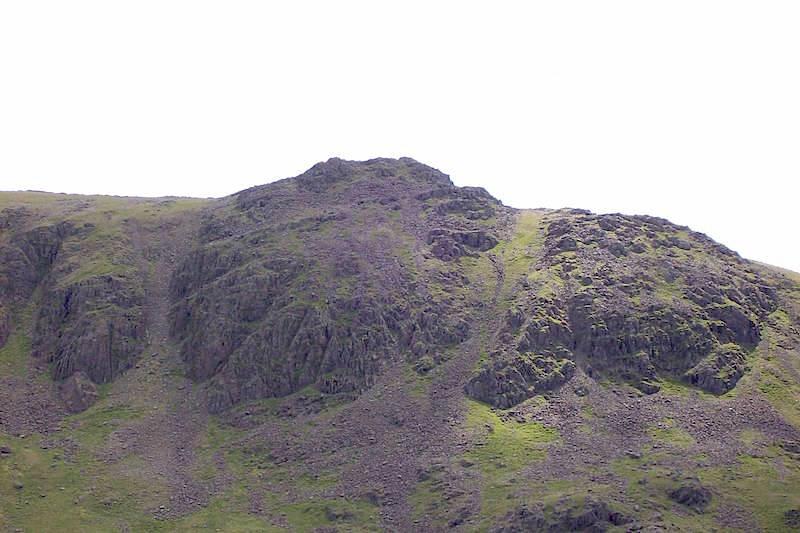 Also from the descent a look back at Little Gowder Crag. There is still a very long way to go from here and it is baking hot….. 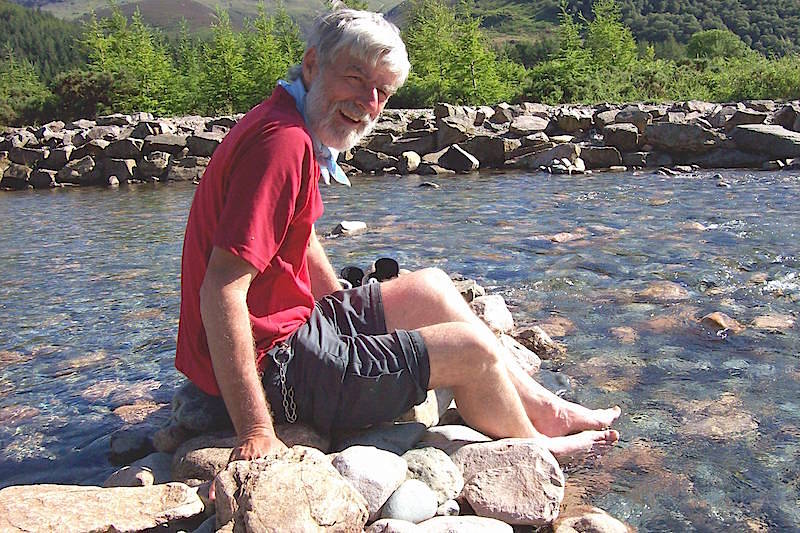 ….. So we treat ourselves to some cooling foot spa treatment, bliss. 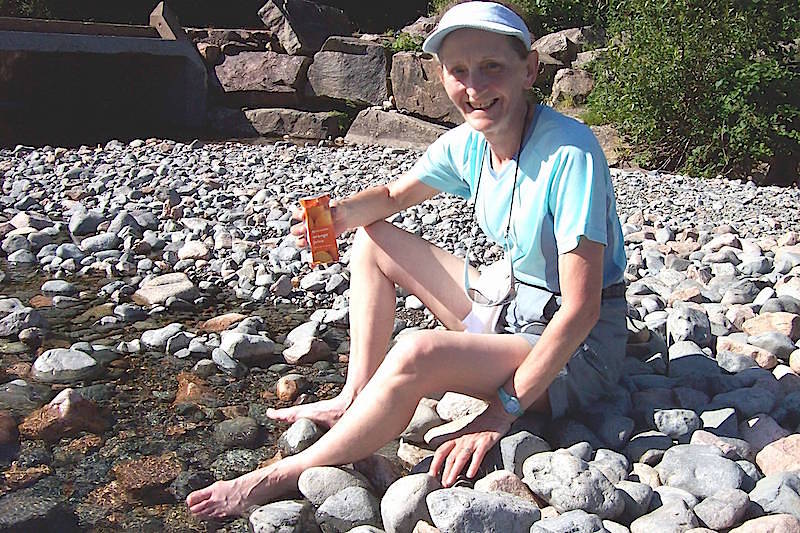 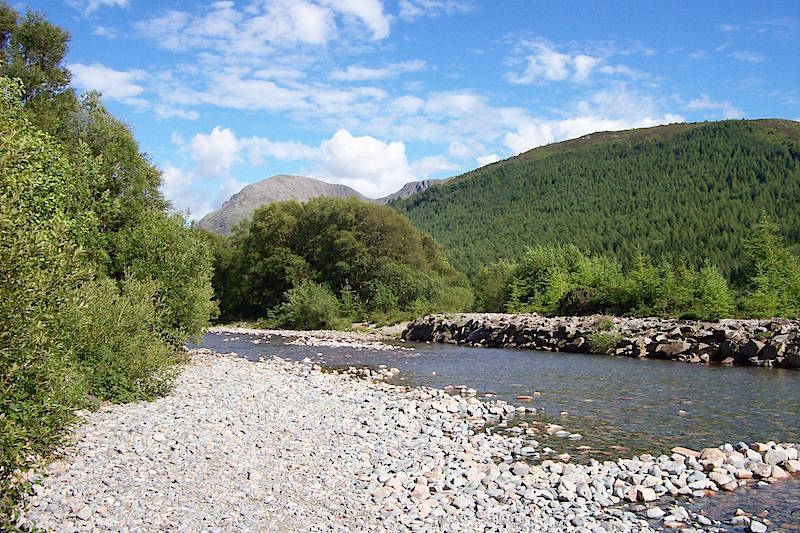 Before we lose the view, a look back along the river Liza with the huge mass of Pillar dominating the valley. It was probably a bit too hot to be doing a walk as long as this in such hot weather, but you have to take the opportunity when it arises. The long daylight hours of summer are great for long walks like this, but they don’t always turn up complete with day long sunshine so, despite the heat, we had a great day’s walking in a quiet, uncrowded area of lakeland.